Accessibility links
Calm Returns, Fear Remains, In Kyrgyzstan's South In the devastated city of Osh, many residents emerged for the first time after days of ethnic violence. Some of them are searching for missing loved ones; others are looking for a way out of the city. 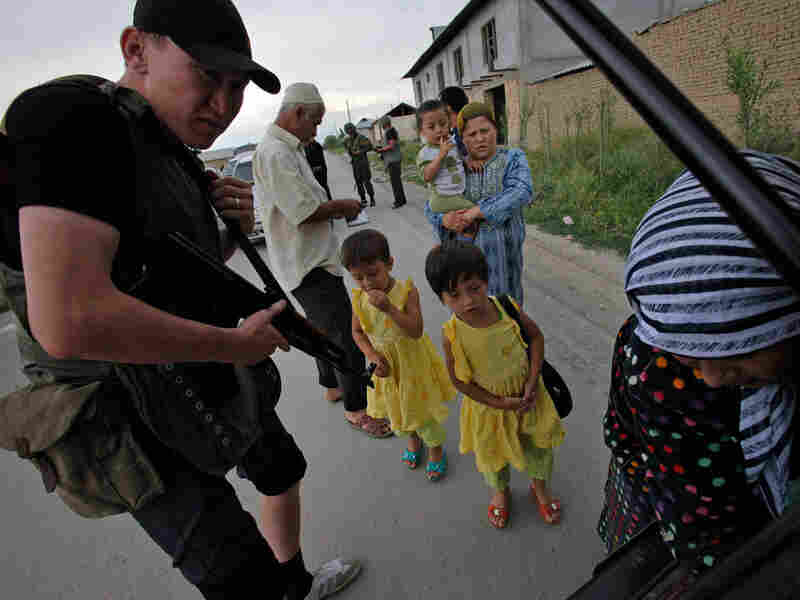 A Kyrgyz army volunteer checks the trunk of a passing car Wednesday during a search for weapons, as an ethnic Uzbek family looks on, at a checkpoint on the outskirts of the southern Kyrgyzstan city of Osh. Alexander Zemlianichenko/AP hide caption 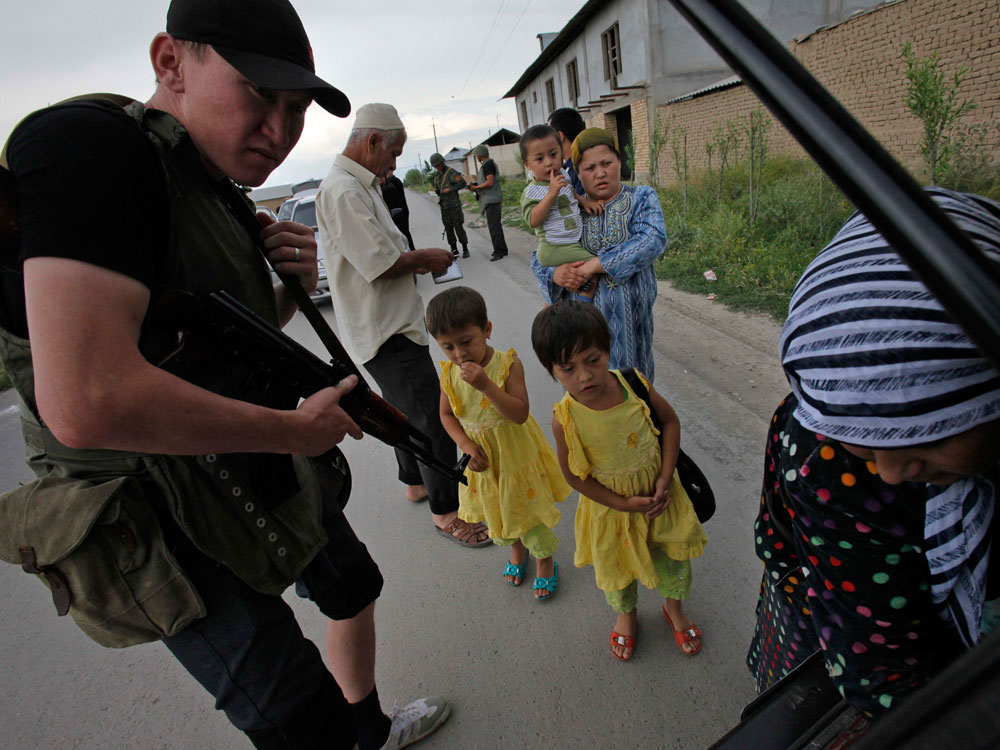 A Kyrgyz army volunteer checks the trunk of a passing car Wednesday during a search for weapons, as an ethnic Uzbek family looks on, at a checkpoint on the outskirts of the southern Kyrgyzstan city of Osh.

Thousands of Uzbeks, fleeing gangs of Kyrgyz militants, have left the city in southern Kyrgyzstan. The remaining residents from both ethnic communities have been hiding in their homes, waiting for the shooting to end.

Now people are trying to find food, trace their loved ones, or get away from the devastated city.

The violence in and around Osh began last Friday and raged over the weekend, killing 187, though officials say the actual number may be much higher.

Kyrgyzstan's interim government has struggled to impose authority over the Muslim-majority country since unrest in April ousted President Kurmanbek Bakiyev.

Oxsana Slyminova, 26, was at a makeshift encampment Wednesday along with many others waiting for a bus to the airport, and a flight to the capital, Bishkek.

Another woman, Elmira Sadobayeva, held her 2-year-old son in her arms. She had been hiding indoors since the shooting started. And now she has decided she has had it with Osh.

"It has been five or six days since this started," she said. "We don't have any opportunity to go to the shops and buy any food. If I was alone, I would stay here. But with a child, it's so difficult."

The sad reality here is that many Kyrgyz are joining the tens of thousands of Uzbeks who fled during the height of the violence in Osh and the surrounding region.

The calmer atmosphere Wednesday offered many a chance to search for people lost in the turmoil.

City officials are worried many ethnic Uzbek and Kyrgyz are caught behind what have become, in essence, enemy lines in this ethnic conflict. Officials are encouraging hostage trades -- if Kyrgyz residents bring Uzbek hostages to police, the police will try to find Kyrgyz residents to return home.

Almaz Alukulov says he believes his brother is being held in an Uzbek neighborhood.

"We just now delivered peacefully some Uzbeks -- 10, maybe 15 Uzbeks -- for one Kyrgyz. I sent 15 women in a bus after they promised to give back our brother, but they haven't," he said.

Around Osh, the military presence seems to be growing. There are checkpoints all over the city and armored vehicles patrol the still-littered streets.

Sometimes the vehicles speed past a neighborhood still in hiding, barricaded off by fallen trees.

In one neighborhood of diverse ethnic groups, about two dozen people -- Kyrgyz, Uzbek and Russian -- were chatting over tea, munching apples from their orchards and talking about how they remain scared.

'Defense With No Weapons'

Despite a growing sense of calm, there are still reports of sniper attacks. Some Uzbek enclaves have been hit by gunfire in recent days.

"Here, it's defense with no weapons," said Bakhtiyar Salidzanov, an Uzbek and the leader of this tiny neighborhood of a few hundred people.

No one has been leaving or going to work.

When people approach the street, if they are Kyrgyz, the neighborhood sends a Kyrgyz neighbor to talk to him, Salidzanov explained.

"They go there to sort of cover us Uzbeks. They explain to them, 'Just go because we all live here together.' But if Uzbeks come, then we go talk. From morning till night we stay here on duty. This is our street," he said.

"The trust between Kyrgyz and Uzbeks, in this street we don't lose. Still we trust each other," he said.

Joldushov said it will take years to re-establish that trust in other neighborhoods in the city.

And only then could this city truly feel normal again.