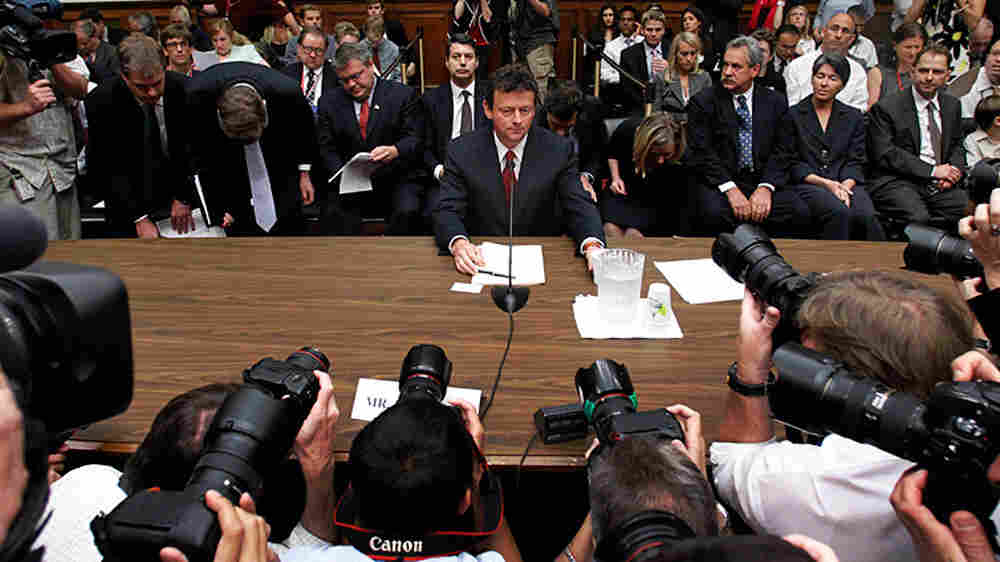 BP CEO Tony Hayward takes his seat on Capitol Hill in Washington on Thursday prior to testifying before the House Oversight and Investigations Subcommittee. Haraz Ghanbari/AP hide caption 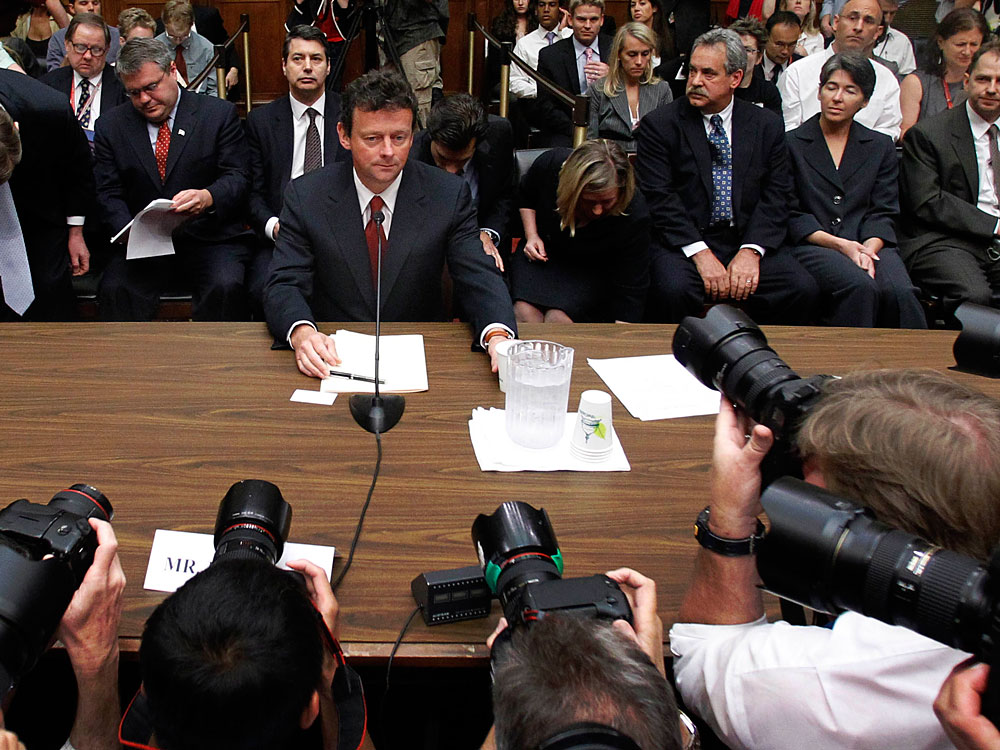 BP CEO Tony Hayward takes his seat on Capitol Hill in Washington on Thursday prior to testifying before the House Oversight and Investigations Subcommittee.

A grim-faced Tony Hayward, CEO of BP, faced angry lawmakers on Thursday, issuing an apology for the Gulf Coast oil spill but denying any direct knowledge about safety issues at the ill-fated Deepwater Horizon well.

"This is unacceptable, I understand that, and let me be very clear: I fully grasp the terrible reality of the situation," Hayward told a House energy Oversight and Investigations Subcommittee.

"None of us yet knows why it happened. But whatever the cause, we at BP will do what we can to make certain that an incident like this does not happen again," he said.

Under questioning from Rep. Henry Waxman (D-CA) about whether the company cut corners, Hayward repeated phrasing from his opening statement, saying he was "distraught."

"I don't want to know whether you're distraught," Waxman snapped.

To Waxman's questions about whether Hayward knew of safety issues at the Deepwater well prior to the April 20 explosion, the BP CEO said he had no knowledge of a debate between engineers over the well's design.

"I'm not stonewalling," he protested at one point. "I was simply not involved" in the design process.

He issued a similar refrain in an extraordinary series of questions fired by Rep. John Dingell (D-MI) about whether BP saved money by cutting corners in the well's construction. His answer, repeatedly, was, "I can't recall," to which Dingell kept replying, "Please submit that for the record."

While Hayward's testimony proved inadequate for most lawmakers, Rep. Bill Barton (R-TX) offered the BP chief an apology for what he called a "shakedown" that the company experienced at the White House on Wednesday.

Hayward and other BP executives ceded to a key demand from the White House and Congress by agreeing Wednesday to set up a $20 billion fund to pay oil spill claims.

"I think it is a tragedy of the first proportion that a corporation can be subject to a shakedown -- in this case, a $20 billion shakedown," Barton told Hayward.

He said the move to set up the escrow fund "sets a terrible precedent for the future."

Democrat Edward Markey quickly retorted: "No, this is not a shakedown. It is President Obama ensuring that this company is held accountable."

Markey said it was a matter of the government "making sure that innocent victims are not roadkill."

Barton later apologized in a statement, saying he was retracting his apology to BP.

"I apologize for using the term 'shakedown' with regard to yesterday's actions at the White House in my opening statement this morning, and I retract my apology to BP," he said.

Later, Rep. Michael Burgess (R-TX) made a point of telling Hayward, "I am not going to apologize to you."

"I don't feel apologies are in order," he said, speaking to Hayward in the afternoon question-and-answer session.

In subsequent questioning, the CEO was asked whether he would characterize the White House meeting on Wednesday as a "shakedown."

"The fund is a signal of our commitment to do what is right," he said.

Just before Hayward was ready to deliver his opening remarks, a protester later identified as Diane Wilson, a 61-year-old fourth-generation fisher from Seadrift, Texas, near the Gulf Coast, appeared with a black-stained hand and yelled: "Hayward should go to jail."

In a letter to Hayward this week, the subcommittee chairman, Rep. Bart Stupak (D-MI), and Waxman, the full committee chairman, told him to expect questions on documents showing company decisions before the explosion "that increased the risk of a blowout to save the company time or expense."

Newly disclosed documents released by Sen. Chuck Grassley of Iowa, the senior Republican on the Senate Finance Committee, show that after the April 20 explosion and fire that sank BP's Deepwater Horizon rig, the company made a worst-case estimate of 60,000 barrels a day flowing into the Gulf of Mexico. That figure is far higher than the company acknowledged publicly until this week, when the government presented the same worst-case estimate.

The undated estimate by BP, apparently made last month, reflected the actual situation as it was understood by BP at the time, Grassley said, according to The Associated Press.

"Certainly Americans have a right to know that BP made these estimates, the date these estimates were determined and why they were not disclosed at that time," Grassley said Wednesday.

In a letter to BP America President Lamar McKay, Grassley asked BP to explain when it calculated a worst-case scenario of 60,000 barrels a day and to provide documents justifying the figure.