Accessibility links
Poll: Obama And U.S. Remain Popular Overseas But the U.S.A.'s standing has plunged in Mexico and remains dismal in many Muslim nations despite the president's outreach.

A new poll of global attitudes shows that while international "Obamamania" has cooled, the president remains very popular overseas -- particularly in the wealthier, non-Muslim nations of Western Europe. 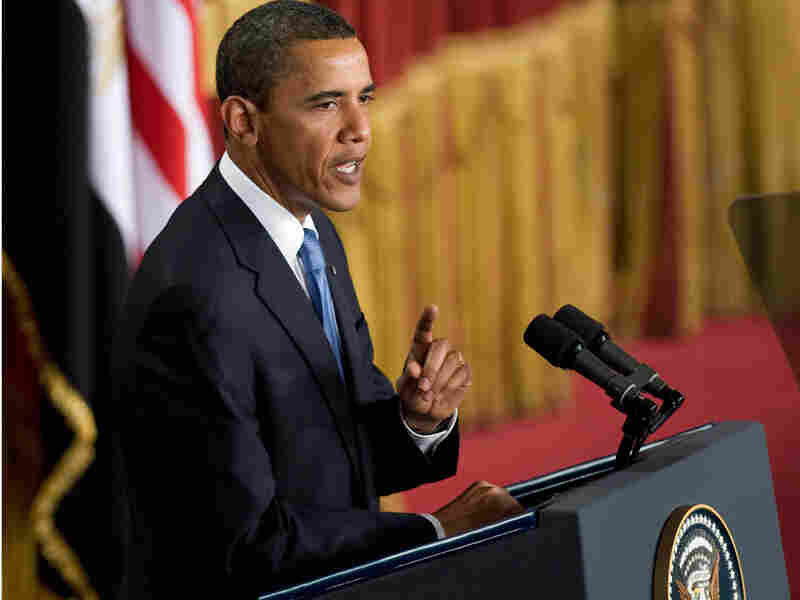 On June 4, 2009, the president used an address at Cairo University to reach out to the Muslim world. But Pew's survey shows the U.S.A.'s standing in Muslim nations has slipped in the past year. Saul Loeb/AFP/Getty Images hide caption 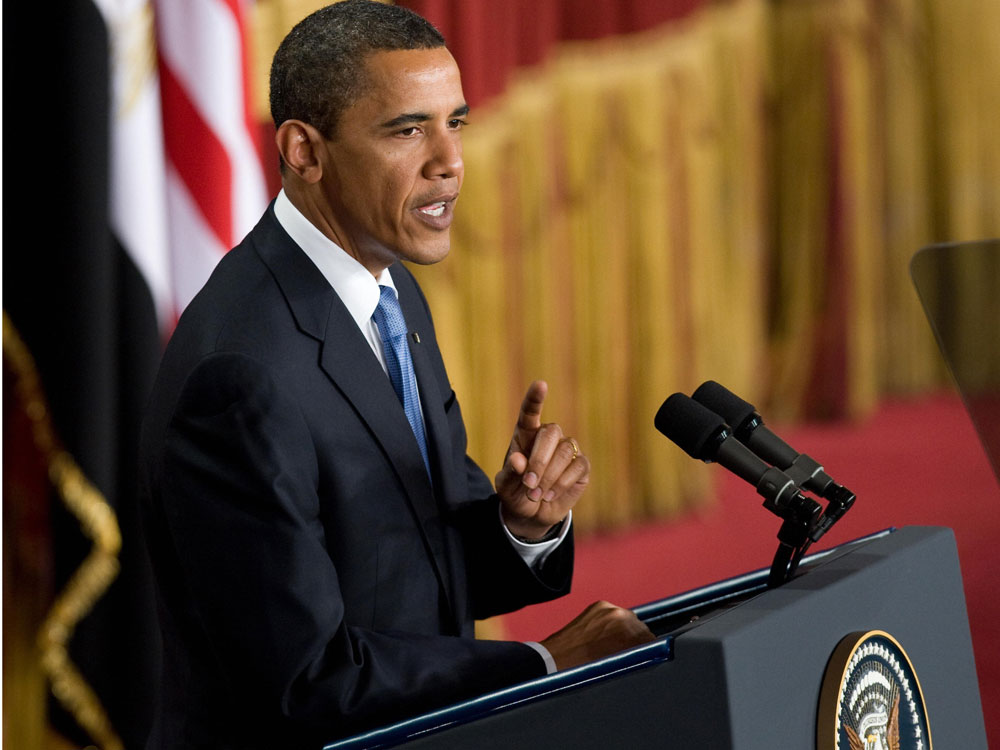 On June 4, 2009, the president used an address at Cairo University to reach out to the Muslim world. But Pew's survey shows the U.S.A.'s standing in Muslim nations has slipped in the past year.

And he gets high marks for his handling of the world economic crisis, except here at home, where the public is split on his performance.

"President Obama continues to be broadly popular in much of the world outside of Muslim countries," said Andrew Kohut, president of the Pew Research Center, which released its 22-nation, annual Global Attitudes poll Thursday.

"As a result, the image of the United States is a positive one and remains much better than during the Bush years," Kohut said Thursday.

The international image turnaround that Pew recorded last year after Obama’s election, he said, "has been sustained."

2010 "favorabiilty ratings" for the U.S. in countries around the world:

There was also a survey done in the U.S., which produced an 85 percent favorable rating.

Confidence in Obama to "do the right thing in world affairs" was 90 percent in Germany, 87 percent in France, and 84 percent in Britain.

But while still significantly better overall than during much of the George W. Bush administration, America’s image has recently plummeted in Mexico. And it has stayed stuck on "overwhelmingly negative" in predominantly Muslim countries, according to survey results.

In Mexico, those who view America favorably declined sharply. Overall, the U.S.A.'s favorability rating in Mexico fell from 69 percent last year to 56 percent. And, Pew reported, "a special follow-up poll found America's favorable rating tumbling in Mexico in response to Arizona's enactment of a law aimed at dealing with illegal immigration. ... Only 44 percent of Mexicans gave the U.S. a favorable rating following the signing of the bill, compared with 62 percent who did so before the bill passed."

Though Obama has called the law "misdirected," Pew found that 54 percent of those surveyed in Mexico said they don’t like how the president has handled the issue. Kohut attributed the dramatic drop of America's standing in Mexico to the law.

"Even though the president is not responsible for the law and has been a critic of it, he gets blamed as well," Kohut said.

Effort To Reach Out

The stubbornly dismal image of American in the Muslim world suggests that the president’s stated efforts to build bridges to Islamic nations have, at best, stalled.

Kohut said that those in Muslim nations continue to largely view American anti-terrorism efforts as anti-Muslim, and a threat to their countries.

The exception? Indonesia, the world’s largest predominantly Muslim country and a place where Obama spent part of his childhood. There, 59 percent of those surveyed said they have a favorable view of America. That’s a decline from a 63 percent approval rating last year, but up from the 37 percent of Indonesians who viewed America positively during the last year of the Bush administration.

Most troubling, perhaps, for the administration is the significant decline noted in positive feelings about America in Egypt, where only 17 percent of residents surveyed expressed a favorable view of the United States.

That’s a 10 percentage point decline from last year, and, according to Pew, the lowest favorable rating recorded in Egypt in the past four years of polling. Likewise, only 17 percent of citizens of Turkey and Pakistan, countries considered to be America's allies in that troubled part of the world, said they viewed their Western partner favorably.

Just over a year ago, Obama delivered a high-profile speech in Cairo. But his new-way-forward outreach to the Muslim world appeared to falter this year in the face of ongoing wars in Afghanistan and Iraq, and efforts to grapple with national security issues raised by al-Qaida-linked terrorism efforts, including the Christmas 2009 attempt to bomb a U.S. airliner.

The 'Idea Of Obama' Vs. Reality

The Pew survey showed that America’s favorable ratings have risen sharply in Russia, China and Japan, though they've slipped slightly in India. Internationally, there remained a stubborn feeling that the United States doesn’t take into account other nations’ interests when pursuing its foreign policy.

Former Republican Sen. John Danforth, who joined Kohut and Clinton-era Secretary of State Madeleine Albright at a news conference announcing the poll results, said that Obama's early promises to close the detention facility at Guantanamo Bay, Cuba, and to end the wars in Iraq and Afghanistan haven't been realized. So, said Danforth, "we don't see a translation of his popularity to policy" -- meaning that around the world, "there is a disjuncture between the idea of Obama and the reality of Obama."

Overall, said Kohut, "there continues to be reservations about American policy and approach, but it exists with a positive attitude toward the country and Obama.”

The case now? "People disagree with us, but don’t necessarily disapprove of us," Kohut said, a significant shift from the international anti-Americanism that marked most of the Bush years.

State Of Muslim Relations A Year After Obama Speech June 4, 2010