Accessibility links
U.S. Hopes To Win Afghan Trust, Village By Village The mission of Green Berets in a village outside Kandahar is a long, slow effort to persuade Afghans to side with the government and not the Taliban. Recently, the American troops met with some small success. It's part of the major U.S. military operation in the Taliban stronghold.

Northwest of Kandahar city, a patrol of American and Afghan commandos slowly moves out of their mud-walled compound and toward Ezabad, a village just a football-field away and right in the middle of Taliban country.

It's midmorning and already scorching -- over 100 degrees of desert heat.

The Green Berets are part of this year's major military operation in southern Afghanistan's Kandahar province. Their mission is a long, slow effort to convince Afghans to side with their government and not the Taliban.

Everybody else is starting to realize how to fight the war the right way, focused on the population. Because without these people here, we're no good.

Eli, a 32-year-old Green Beret officer from Idaho, is leading this patrol. For security reasons, only his first name can be used.

A Matt Damon look-alike, Eli wears a floppy camouflage hat and has six tours of duty in Afghanistan under his belt. During many of those tours, Eli says, the Americans weren't fighting the war the right way. Too much focus was on killing the Taliban, he says, and not enough on protecting the people.

"Everybody else is starting to realize how to fight the war the right way, focused on the population. Because without these people here, we're no good," Eli says.

That means providing security to villages like Ezabad and following up by building and restoring schools and clinics, much of it paid for with American money but funneled through the Afghans.

"That way it shows that it's going through the government, not just us coming up here and saying we'll repair your mosque and this, this and this," Eli says. 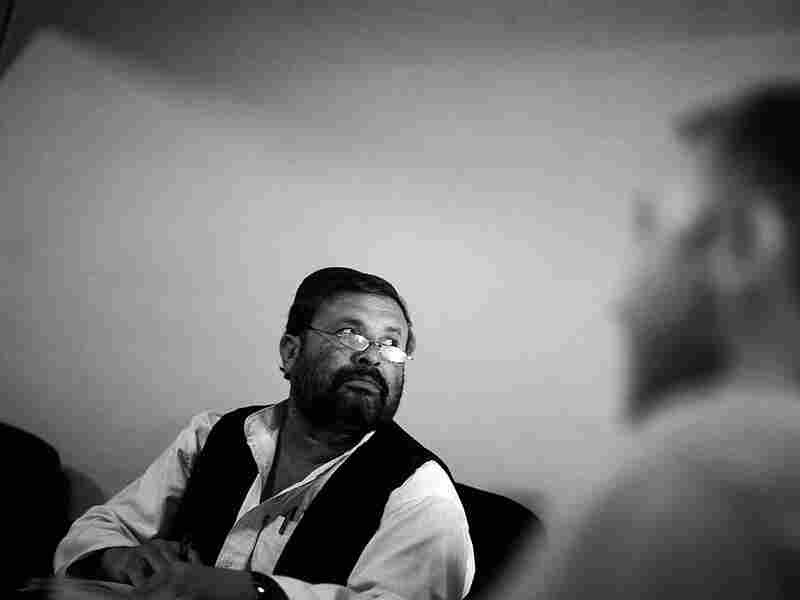 Obidullah Bawari, leader of Maiwand district, sits in a security shura, or meeting, with Afghan and American military officers in Afghanistan's southern Kandahar province. He doesn't visit the villages he represents, he says, because of security risks. David Gilkey/NPR hide caption 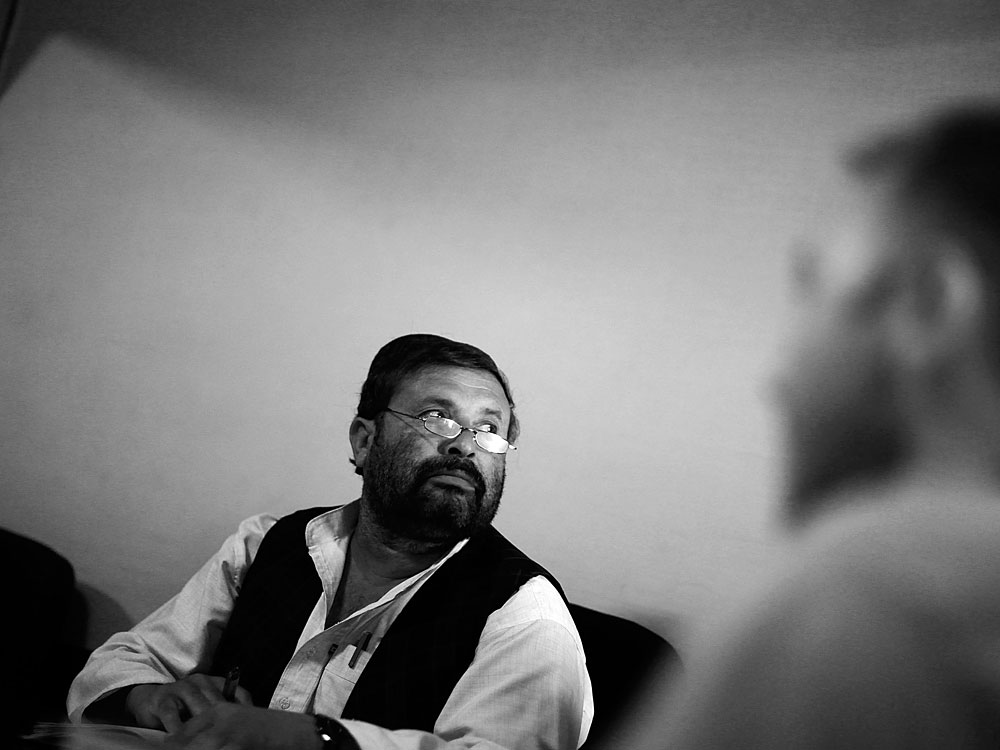 Obidullah Bawari, leader of Maiwand district, sits in a security shura, or meeting, with Afghan and American military officers in Afghanistan's southern Kandahar province. He doesn't visit the villages he represents, he says, because of security risks.

The problem is that there is no Afghan government in Ezabad. And without that, the Americans say, the war can't be won.

The top Afghan political official in the area, district leader Obidullah Bawari, hasn't even visited the village. Eli says the top Afghan army special forces officer working with the Americans is suspicious of him.

"He doesn't like him a little bit because he knows that he takes money," Eli explains. "He doesn't show his face, and that's a problem."

Bawari is a portly man. During a meeting at an American military base a few miles away, he peers over his reading glasses, munching on tortilla chips.

During a break in the meeting, Bawari is asked why he doesn't get out to the villages. He responds through a translator that he goes when he is invited and that he isn't able to go to some places for security reasons. He promises he will visit sometime in the future.

For now, the only visitors are the American Green Berets and their Afghan army partners -- and the Taliban. In the absence of any competent government, Ezabad is ripe fruit for the insurgents.

So Eli and the Afghan soldiers are taking the first small steps to change things. For months they've patrolled here. Now they've actually moved into the village, taking over an abandoned compound.

Over the coming months, Eli and his team hope to create an armed community-watch program in the village as another line of defense against the Taliban. Similar watch groups are up and running in the farming areas north of Kandahar city.

The Green Berets are working, literally, one village at a time.

Eli says he thinks the effort is going to take years -- "years for making up for the mistakes that everybody's admitted that we made."

Eli and his patrol move through the village on a mazelike, narrow road with 10-foot-high walls on either side. There's a sense of not knowing what to expect around the next corner. The path opens up into a field. There are plenty of goats nearby, but no men in sight.

"This is one thing I was afraid of, nobody being out," Eli says.

There are constant reminders of danger on this patrol. Eli sidesteps a wide patch of straw on the path. He says he doesn't walk over it because he can't see what's buried underneath.

It's a good instinct. Just down the road, another group of American soldiers discover a roadside bomb. Eli pauses by the side of the road with his patrol as the other soldiers destroy the bomb.

Courting Allies, One At A Time

Eli and his men keep moving until they find Nabi, a farmer who has been a good source of information on the Taliban. Nabi is tall, thin and nervous. He squats on a mat inside his house, together with the soldiers.

The Americans ask him about the Taliban. He says they slip into the village quietly.

They intimidate the villagers. They will send out what's known as a night letter -- a written threat to beat or kill anyone who supports the Americans.

In Ezabad, some of the villagers support the Taliban. Others are just scared and unwilling to choose sides.

Eli asks Nabi to side with the Afghan government and join an armed security watch to help the village fight the Taliban.

Nabi won't commit, but Eli isn't about to let him off so easily.

He asks Nabi through a translator whether he will accept an invitation to join Eli and his men for lunch. Eli suggests the next day at 1 p.m.

Sure enough, Nabi visits the American compound the next day and says he will join the armed community watch.

It's one small victory for the Green Berets.