Accessibility links
When It Comes To Retirement, 67 Is The New 55 You may have to wait a bit longer. A combination of financial pressures and aging populations is forcing U.S. states and European countries to raise their official retirement ages. Amid it all, a debate over how to make up for coming shortfalls in Social Security is looming.

Looking forward to retirement? You may have to wait a bit longer. Financial pressures are pushing up retirement ages all over. 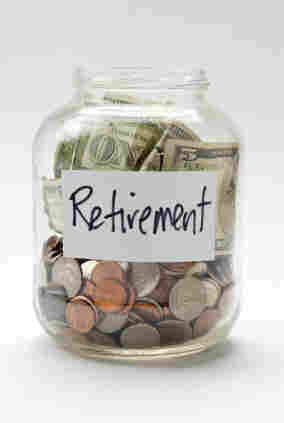 William Reichenstein, who teaches finance at Baylor University, tells his students that they will have to save a lot more of their working income if they hope to retire as comfortably as their parents and grandparents, simply because they're going to live longer. iStockphoto.com hide caption

On Wednesday, France, which was the last holdout in Western Europe maintaining an official retirement age of 60, proposed increasing it to 62 by 2018. On the same day, California's Republican Gov. Arnold Schwarzenegger announced a deal with four state public employee unions to raise the retirement age by five years for newly hired workers.

These moves follow several recent age increases across Europe and among U.S. states. Faced with one of the worst pension shortfalls in the country, Illinois in March lifted the retirement age for new state workers from as low as 55 all the way to 67.

The increases also anticipate the coming debate among members of the White House deficit commission over raising the eligibility age for Social Security benefits. The group will release recommendations on lowering the federal debt this fall.

The motivations driving all these various governments are similar. People are living longer and, therefore, are drawing retirement benefits for longer periods. That has placed enormous strain on pension programs of all sorts.

As a result, benefit cuts and higher retirement ages are becoming the norm. "That's where we are," says Sujit CanagaRetna, a senior fiscal analyst with the Council of State Governments. "We're in a very tight situation where these types of changes are inevitable."

William Reichenstein, who teaches finance at Baylor University, tells his students that they will have to save a lot more of their working income if they hope to retire as comfortably as their parents and grandparents, simply because they're going to live longer.

Retirement Ages Around The World

View a sampling of official retirement ages around the world, according to a 2009 report from the Organization for Economic Cooperation and Development, based on data from 2002-07. France is among the countries listed that have already announced plans to raise their retirement ages in the coming years.

"If their parents are going to retire at 65 after working 40 years, they need to plan for about a 20-year investment horizon," he says. "For my students' generation, with life expectancy going up about a month a year, in their cases they have maybe 25 years in retirement they have to plan for."

Another result of longer lifespans in the United States is that the ratio of people paying into Social Security, compared with those drawing benefits, is shrinking rapidly. "We know that in 2017, Social Security will begin paying out for the foreseeable future more in benefits than it collects in taxes," says Richard W. Johnson, director of the Urban Institute's retirement policy program.

The Social Security trust fund will be able to make up the shortfall for 20 to 25 years. "But that trust fund is now being used to offset other parts of the deficit," Johnson says. "Once we can no longer use that trust fund to fund other services, the deficit really balloons."

How Old Is Fair?

That's why President Obama's deficit commission is seriously considering raising the retirement age. Currently, people can start collecting reduced benefits at 62, with full benefits available at 66. The full retirement age is set to rise to 67 for people born after 1960.

Raising the full retirement age by 2020, rather than 2027, would save $92 billion, according to the Congressional Budget Office.

"We have this huge problem we really have to address," says Steven Sass, director of the Center for Financial Literacy at Boston College. "We either have to cut benefits or increase revenues."

Sass points out, however, that raising Social Security's retirement age will disproportionately affect low- and moderate-income workers. People who work longer into old age tend to hold less physically demanding office jobs and are better educated. Those who are less educated or work in manual labor make up a greater share of people who are opting for the lower-paying early retirement benefits. Their numbers are increasing with the recession.

Because Social Security benefits are paid out on a sliding scale -- you lose about 7 percent for every year you retire early -- raising the full retirement age amounts to a de facto cut for those who are forced to retire early. "It's a terrible way to cut benefits," says Eric Kingson, a professor of social work at Syracuse University and co-director of Social Security Works, a coalition of unions and other groups that lobbies against benefit cuts.

"Life expectancy has improved, but not for all the groups," he says. 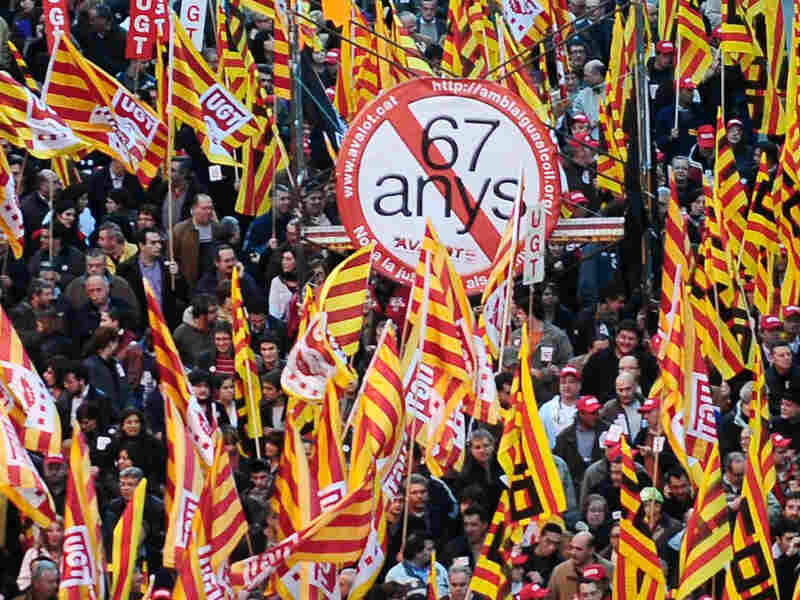 People in Barcelona protest Feb. 23 against the Spanish government's plans to raise the retirement age. The marches were sparked by Prime Minister Jose Luis Rodriguez Zapatero's proposal that Spaniards delay retirement from 65 to 67 to ensure the long-term stability of the country's pensions. Manu Fernandez/AP hide caption 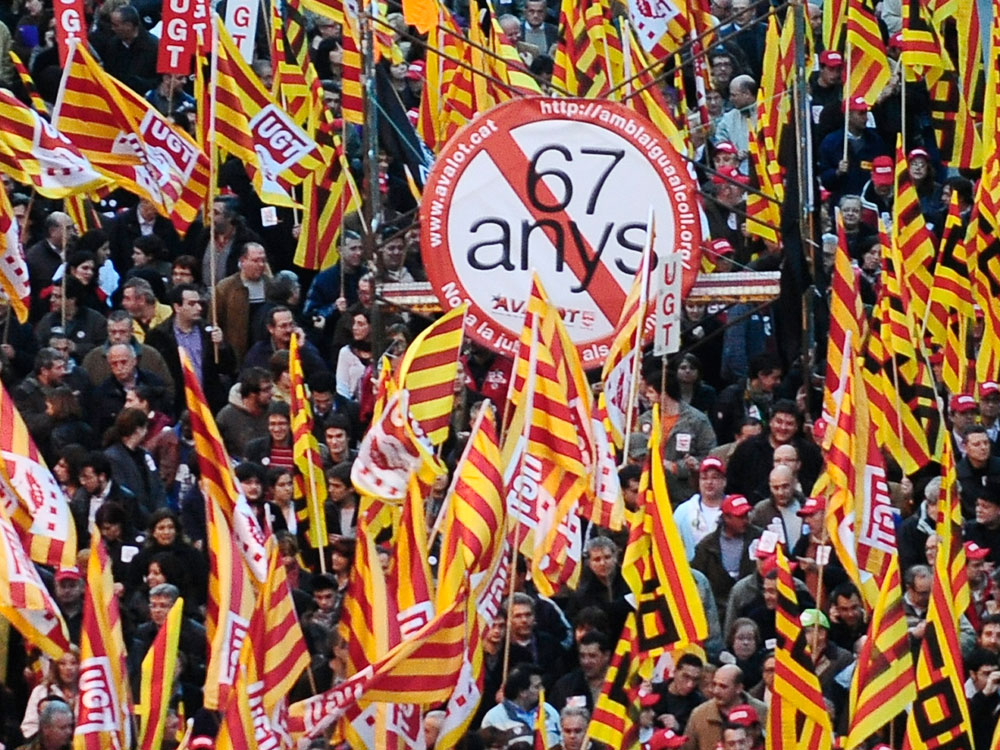 People in Barcelona protest Feb. 23 against the Spanish government's plans to raise the retirement age. The marches were sparked by Prime Minister Jose Luis Rodriguez Zapatero's proposal that Spaniards delay retirement from 65 to 67 to ensure the long-term stability of the country's pensions.

There are fierce arguments looming over whether taxes should be raised or Social Security benefits should be cut, either outright or through an increase in the retirement age. These kinds of debates are already happening across Europe.

Greece, until recently, allowed workers in more than 580 job categories considered hazardous to retire with full pensions as early as age 50 for women or 55 for men. In response to its fiscal crisis, that country has raised the retirement age to 65 for most workers.

In Ireland, the government has proposed gradually raising the retirement age from 65 to 68. Hungary raised its retirement age in 2008 from 62 to 65 -- one big reason why the ruling Socialists got trounced in parliamentary elections in April.

French President Nicolas Sarkozy is bound to experience blowback on his new plan, too -- even though it won't erase even half the nation's projected pension funding gap.

Reichenstein, the Baylor finance professor, says there is no other option. "The governments have promised more than they can meet," he says. "The reality is that they have to cut back."

Reichenstein notes that things aren't quite so drastic -- yet -- in this country. For one thing, the U.S. federal debt -- although climbing rapidly -- is not yet as great as a share of GDP as debt in many European nations. Our median age is lower, too, thanks in part to immigration. The median age in the U.S. is just under 37, while it's right around 44 in Germany, Italy and Japan. And there are still some years left to find fixes for Social Security.

But state systems may be another matter. A study from the Pew Center on the States in February found that state pension systems were collectively running a $1 trillion deficit -- and that was based on figures compiled before the 2008 stock market crash.

The California Public Employees' Retirement System announced Wednesday that the state needs to increase its pension contributions by $600 million a year.

Schwarzenegger's new agreement raises the retirement age for state workers by five years and requires current workers to contribute more of their salaries into their own retirement accounts. The deal is expected to save $72 million this year -- a number that would grow to $2.2 billion if all the state's public sector unions reach similar terms, according to the state finance department.

There's increasing political pressure for them to do so. Voters in a number of California cities will be voting this year on increasing retirement ages and cutting pension benefits for government workers. Meg Whitman, who won the Republican nomination to succeed Schwarzenegger last week, has called for raising the retirement age of state workers.

Several states have already done so, creating two-tiered systems that are much less generous for new hires.

"It's a correction long overdue," says Dowell Myers, a demographer at the University of Southern California. "Not only are people living longer but they're living way longer than they were when these programs were set up, and we have less money than we used to."