Accessibility links
Uzbeks In Limbo As Misery Grows In Kyrgyzstan Ethnic violence in southern Kyrgyzstan last week sent tens of thousands of minority ethnic Uzbeks fleeing, many to crowded camps in neighboring Uzbekistan. Now, the Uzbek government says it has taken in all the people it can handle, leaving thousands more refugees waiting at the border.

The humanitarian crisis is worsening by the day in the Central Asian nation of Kyrgyzstan, where ethnic violence in the country's south last week sent tens of thousands of minority Uzbeks fleeing. Many made it across the border to crowded refugee camps in Uzbekistan.

But then Uzbekistan's government announced it had taken in all the people it could handle. That has left thousands more refugees waiting at the border, in villages such as Suradash.

The sound of desperation greets visitors as soon as they step out of a car. 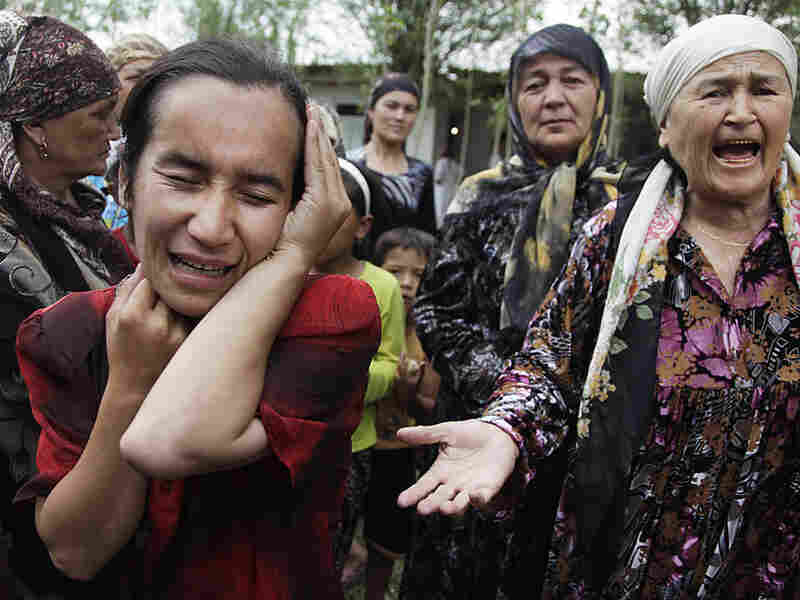 Ethnic Uzbek women from Kyrgyzstan plead for help at a refugee camp in Nariman on the border with Uzbekistan. Tens of thousands of minority Uzbeks have fled their homes in the wake of ethnic violence last week in southern Kyrgyzstan. Oxana Onipko/AFP/Getty Images hide caption 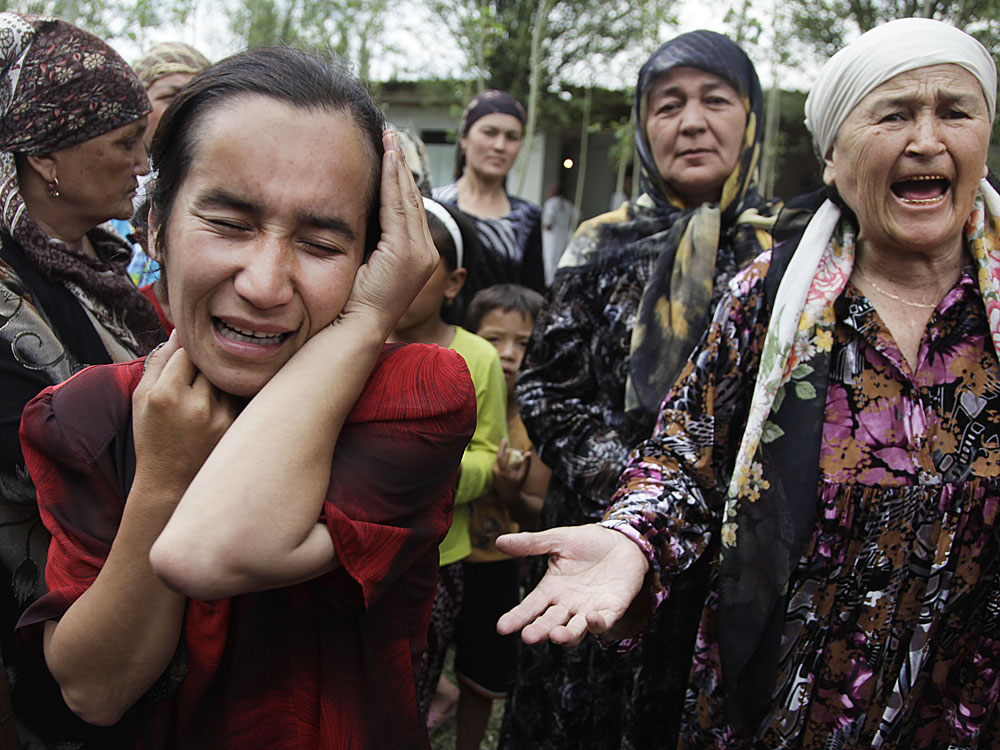 Ethnic Uzbek women from Kyrgyzstan plead for help at a refugee camp in Nariman on the border with Uzbekistan. Tens of thousands of minority Uzbeks have fled their homes in the wake of ethnic violence last week in southern Kyrgyzstan.

A crowd of ethnic Uzbek women surrounds the visitors. Our stories of pain must not be reaching the outside world, many of them say, or else why would it take so long to get food and aid here?

A Family Forced To Flee

Nergiza Anvarova, 16, is one of the voices in the crowd. Last Thursday night, she says, her house in the city of Osh was set on fire. She saw 16 neighbors dead in the street.

"There were some people who begin this, I think, war. It can be called war," she says.

Anvarova, her family and friends raced for the Uzbek border. They ended up in this village, 20 minutes away from Osh. They immediately delivered their neighbors' bodies to the village mosque, then looked for people to take them in.

Anvarova's story is familiar along this border. She came with her mother and two brothers, and they're crowded in a bedroom with a dozen other people. Anvarova's father stayed behind to defend their Uzbek neighborhood. She says her father doesn't want them to come back.

And Nergiza isn't convinced she will ever go back. Much of her neighborhood is destroyed. She is worried she'll never be able to return to her beloved language institute, where she has been perfecting her English for six years, in a classroom full of Uzbek and Kyrgyz students.

But where does Nergiza go? Not Uzbekistan like so many others. She says she has no connection to that country. 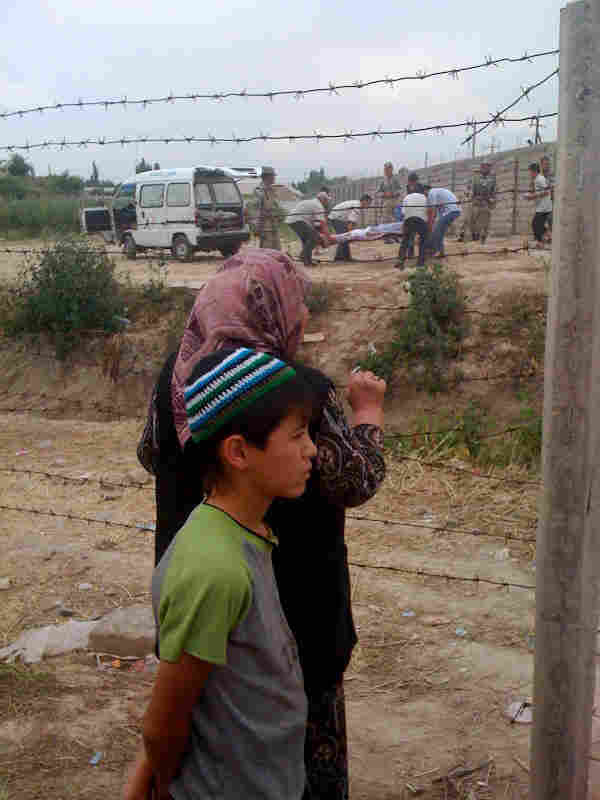 In the Kyrgyz village of Suradash, a woman peers across a fence into Uzbekistan as a fellow Uzbek refugee is loaded into an ambulance. While the border is officially closed, Uzbek border guards have quietly allowed medical teams to evacuate some of the most injured out of southern Kyrgyzstan. David Greene/NPR hide caption

We were born in Kyrgyzstan, one of these women shouts, and we'll die here. So, it's not safe to assume the refugees pressed against the Uzbek border are trying to get in.

The truth is, many don't know where they will end up. They came this way in the rush, and it's turned out to be safe, especially with Uzbekistan border guards so close.

Quiet Acts Of Mercy Amid Privation

But Suradash, a village of normally a few thousand, has been overwhelmed. There is not enough fresh water; the refugees say they haven't bathed or washed clothes since arriving.

There is also no hospital for the injured. Medical students have been treating people inside the mosque, until things get too serious.

Uzbekistan's border guards sometimes help. Just footsteps from the mosque, across a barbed-wire fence, the guards stand in front of a wall, staring into this Kyrgyzstan village like it's a sad movie.

One patient at the makeshift hospital is an elderly man who was stabbed in the navel and shot during the violence. He desperately needed to have blood and fluid drained, a procedure the medical student couldn't perform.

So the border guards quietly allowed an ambulance from the Uzbek side to drive up to the border. They helped the medical team through the barbed wire into Kyrgyzstan.

A nurse inserted a tube into the man's stomach and drained the fluid into an empty water bottle. Meanwhile, the border guards allowed two more injured refugees to be quietly carried across, to the ambulance, and on to a hospital in Uzbekistan.

Perhaps times won't be quite as desperate soon. Slowly, international aid is arriving to the border area.

The arrival of an International Red Cross team was welcome news to Saudat Amanova, a 38-year-old kindergarten teacher and now a refugee.

"If the international community doesn't come help, it will be a disgrace to the whole world," she says, "which seems to be busy only with soccer."