Accessibility links
Would-Be Bombers In U.S. Hampered By Logistics Car bombs and suicide attacks are commonplace in Afghanistan and Iraq. But so far, terrorists have had little success launching those kinds of attacks here. Among the reasons: It is hard to get explosive materials in the U.S.; putting together a bomb is a complicated process; and those kinds of attacks require a team to get them off the ground. 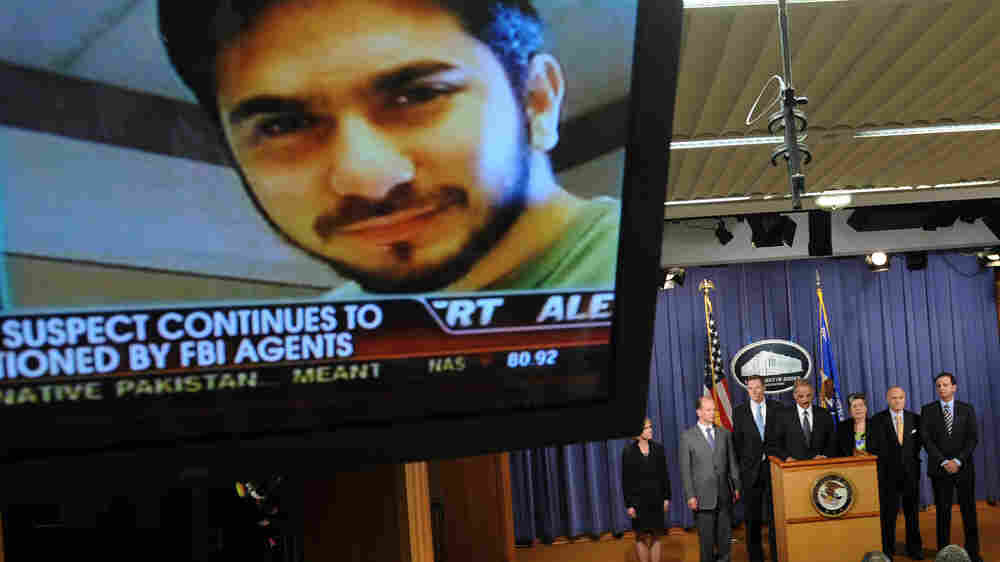 An image of terrorism suspect Faisal Shahzad is seen on a TV screen as Attorney General Eric Holder and other officials hold a news briefing last month about the investigation into the attempted May 1 bombing of Times Square. Jewel Samad/AFP/Getty Images hide caption

For years, officials have predicted that it is only a matter of time before the car bombs and suicide attacks that are commonplace in Afghanistan and Iraq arrive in the U.S.

But so far, overseas terrorist groups have had little success in launching those kinds of attacks in America. The latest example: the attempted car bombing May 1 in Times Square. An SUV was loaded with an explosive device that smoked and sparked but never went off.

It is much harder to actually sit down and build and make a functioning bomb than I think has been represented.

Terry Turchie, who headed the FBI task force that tracked and caught the Unabomber

Explosives experts say there are many reasons for the string of bomb failures. Among them: It is hard to get explosive materials in the U.S.; putting together a bomb is a complicated process; and those kinds of attacks require a team to get them off the ground.

Despite reports to the contrary, experts say the Internet's role in guiding do-it-yourself bomb makers has been highly overrated.

There are plenty of video guides and recipes for improvised explosives on the Web. But officials say to suggest watching a video will make you a bomb maker is a little like saying that watching a couple of Major League baseball games on TV will provide everything needed to step up to the plate and connect with a fastball.

"It is much harder to actually sit down and build and make a functioning bomb than I think has been represented," says Terry Turchie, the former head of the FBI task force that caught Ted Kaczynski, the so-called Unabomber. 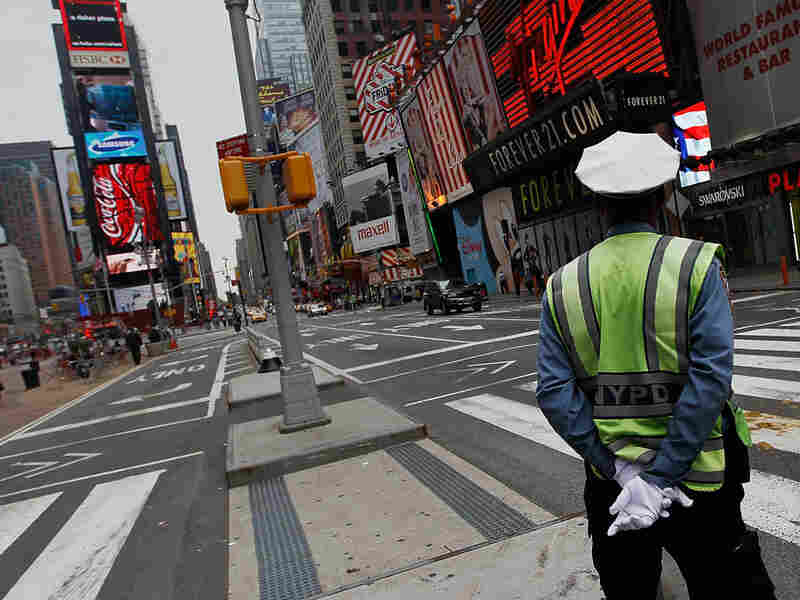 A New York City traffic policeman on his post in nearly empty Times Square the day after a crude car bomb was discovered May 1 after it smoked and fizzled in one of the city's busiest intersections. The primary suspect, Pakistani-American Faisal Shahzad, allegedly received training from militants in Pakistan. Chris Hondros/Getty Images hide caption 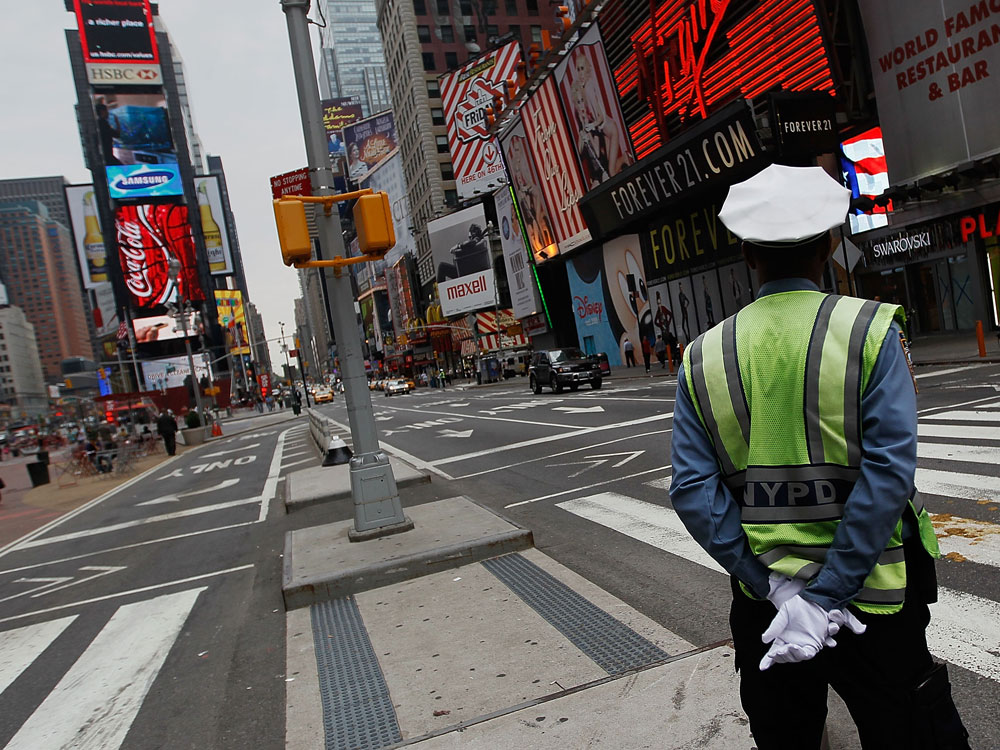 A New York City traffic policeman on his post in nearly empty Times Square the day after a crude car bomb was discovered May 1 after it smoked and fizzled in one of the city's busiest intersections. The primary suspect, Pakistani-American Faisal Shahzad, allegedly received training from militants in Pakistan.

"You can obtain and acquire the information you need, but having the technical ability to put these bombs together is a totally different story," he says.

The arrest of Kaczynski in 1995 ended a nearly 20-year mail-bomb spree in which Kaczynski targeted university professors, corporate executives and airplane passengers. He killed three people and injured some two dozen more.

Kaczynski was a Harvard-educated math genius with anarchist leanings and, alone in a cabin in rural Montana, he taught himself how to make a bomb from scratch. It took him years of research and testing.

"There were gaps in Unabomber attacks," Turchie says. "We found out later that was because he was trying to perfect his bomb. He was teaching himself the fundamentals of chemistry and engineering. The fact of the matter is, it takes a long time to learn to assemble a bomb without killing yourself."

Difficult To Assemble The Materials, And Get It Right

Officials say that while some terrorist operatives have come to the U.S. and gathered the necessary ingredients to make a homemade bomb, the devices rarely work.

That's a big reason why the U.S. hasn't seen many successful explosive attacks. The expertise to assemble the components -- to get the detonator just right, to insert the timer, to pull together an explosive powerful enough -- is very hard to do correctly.

The security has improved so much, it has become very difficult for these people to get into the country.

Leo West, a former explosives expert with the FBI

Bomb makers in Afghanistan and Pakistan have military-grade explosives all around them.

In the U.S., explosives are regulated, so terrorists are forced to fashion bombs by boiling down household products like peroxide and hair spray.

That's what Najibullah Zazi, the man behind a plot to bomb the New York subway system and other transportation targets in 2009, had to do. He was buying hair dye at a Denver beauty supply store so he could concentrate it into a highly volatile explosive called TATP, or triacetone triperoxide.

It is unclear whether he was actually able to do that. Zazi, who pleaded guilty to conspiracy to use weapons of mass destruction among other charges, faces a possible life sentence without parole.

Experts say making a bomb is also very hard to do alone. In the Middle East, there are teams of people who are behind bomb plots.

The teams on the ground include financiers, explosives experts who can predictably turn out devices that work, distributors who get the bombs out to the targets, and people who do reconnaissance.

That model was used to successfully attack the U.S. in 1993. An operative named Ramzi Yousef joined forces with a handful of explosives experts to mix a urea nitrate bomb.

They put the bomb in a van, drove it into the underground parking garage of Tower 1 of the World Trade Center, and detonated it. The bombing killed six people and injured more than 1,000.

Leo West, a former explosives expert with the FBI, says it would be hard to launch that kind of operation now.

"The security has improved so much, it has become very difficult for these people to get into the country," he says.

Without a team, terrorist groups have been forced to rely on just one or two people at a time, and then hope to get lucky.

Evading Detection During The Testing Phase

There is one more hurdle: Even if someone made a bomb, West says, it would need to be tested -- and that attracts attention.

"That testing phase, as well as the target selection and surveillance phase, those are the phases of the operation where the bomber is most vulnerable to being found out or uncovered," he says.

The suspect in the Times Square bombing never tested his car bomb -- he just assumed it would work, according to officials close to the case.

The fireworks the suspect allegedly hoped to use as part of the detonator wouldn't have ignited in a chain reaction -- the safety fuses have to be lit individually. And the fertilizer he allegedly bought wasn't the kind that blew up -- the kind that does has been regulated since the Oklahoma City bombing in 1995.

All these mistakes were made in spite of the fact that the man accused of the Times Square bombing attempt, naturalized U.S. citizen Faisal Shahzad, allegedly had hands-on training in Pakistan.

That isn't to say that terrorist organizations have given up. U.S. intelligence officials say militant groups are still trying to reach into America and find someone who is capable of succeeding where others have failed.