Accessibility links
Controversial Pesticide Worries Scientists In California, scientists are battling with state regulators over the use of pesticides to grow strawberries. Methyl bromide, which is currently used to fumigate the soil the berries are planted in, is being phased out because it damages the ozone layer. Its replacement, however, is carcinogenic. 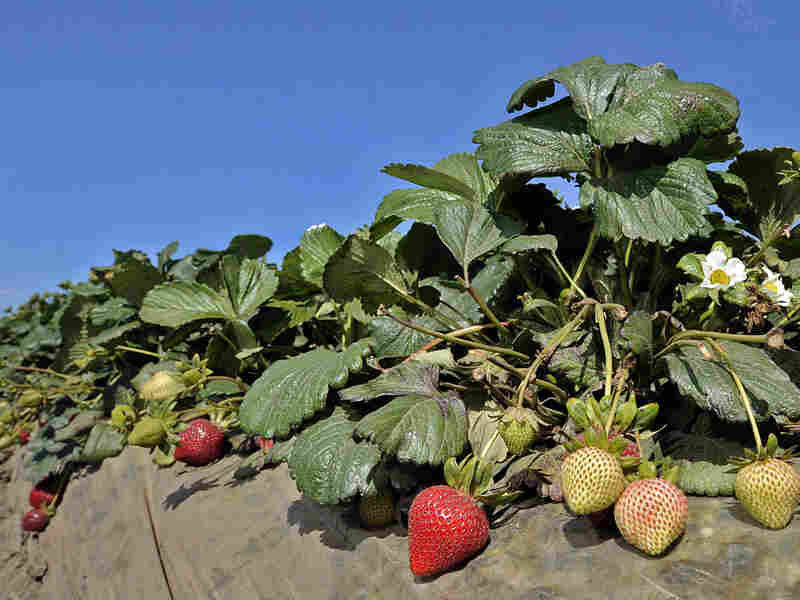 California's strawberry fields have become the latest battleground in a series of skirmishes over pesticide use. Growers say they need state regulators to approve the use of the fumigant methyl iodide as a replacement for methyl bromide, which damages the ozone layer. Mark J. Terrill/AP hide caption 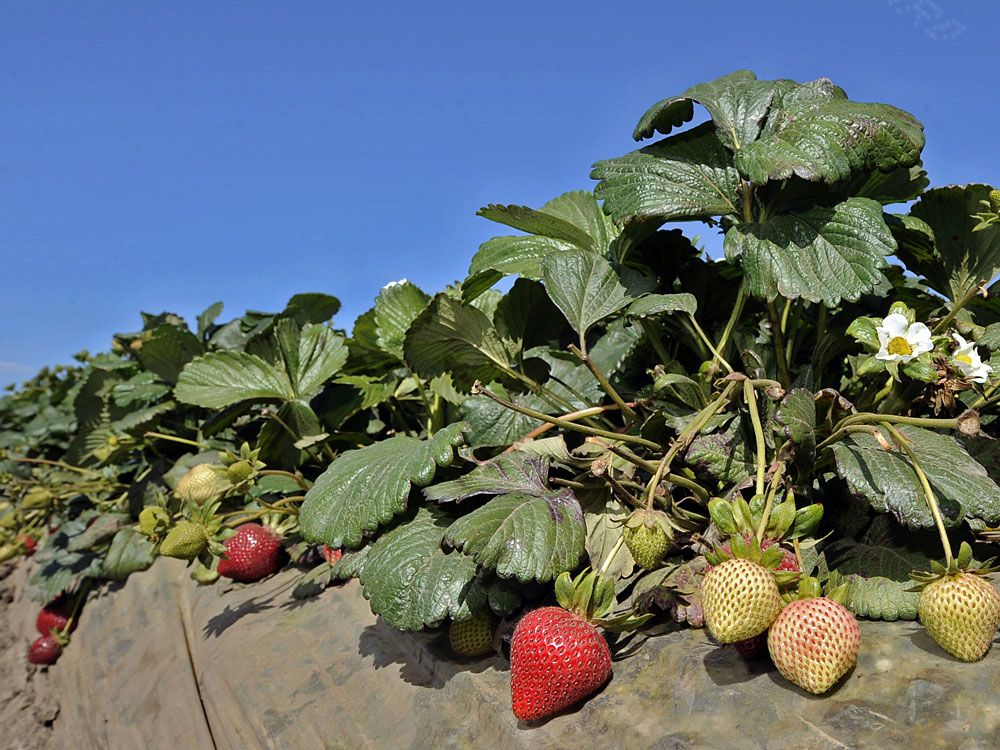 California's strawberry fields have become the latest battleground in a series of skirmishes over pesticide use. Growers say they need state regulators to approve the use of the fumigant methyl iodide as a replacement for methyl bromide, which damages the ozone layer.

Odds are most supermarket strawberries come from California -- that's where 90 percent of the berries are produced. And if the strawberries are not organic, they were likely grown in fumigated soil, which is creating a stir between scientists and regulators in California. The two groups recently faced off over the expected approval of a potentially dangerous pesticide.

Currently, farmers use a fumigant called methyl bromide. But it is being phased out internationally because it damages the ozone layer. And the leading alternative -- methyl iodide -- has its own set of problems.

"This is very likely -- because of its chemical structure -- to be highly toxic," says John Froines, a chemist and professor of environmental health sciences at UCLA. "It is very worrisome, even frightening, to a chemist. And therefore it should be to the public as well."

Frightening because animal studies show that methyl iodide is a carcinogen and a neurotoxin, and it can cause miscarriages.

So the task, in evaluating how toxic methyl iodide is, is to extrapolate this data, from rabbits to humans, and arrive at an exposure level that might be considered safe.

When the Environmental Protection Agency approved methyl iodide as a pesticide under the Bush administration in 2007, it was a controversial decision at the time. But California -- which is the country's biggest user of the chemical -- has its own review process.

In April, the state issued a notice to approve methyl iodide with an exposure limit of 96 parts per billion for workers.

"I was shocked," says Ed Loechler, a biology professor at Boston University.

Loechler served on the independent review panel that was brought in by state regulators to help staff scientists evaluate methyl iodide.

"The number in the notice is 120 times higher than the level that both the independent scientific review panel thought was safe, as well as their own internal experts thought would be safe, in terms of worker exposure," Loechler says.

According to an assessment produced by the panel and staff scientists, the safe exposure level for workers is 0.8 parts per billion. Anything over that, they said, would be unsafe.

"I honestly think that this chemical will cause disease and illness," says Froines, who chaired the panel. "And so does everyone else on the committee."

In setting new exposure levels for methyl iodide, panel members say the state has overstepped its role with little explanation for why.

"They can say anything they want from a policy point of view, but what they cannot do is simply, arbitrarily, change the science," says panel member Paul Blanc, a professor of medicine at University of California, San Francisco.

An e-mail obtained through California's Public Records Act shows that staff scientists were also perplexed by how exposure levels had jumped from the recommended 0.8 parts per billion to 96 parts per billion. They stand by the lower numbers.

Managers at the agency say it's not up to scientists to decide whether methyl iodide is approved and at what levels. 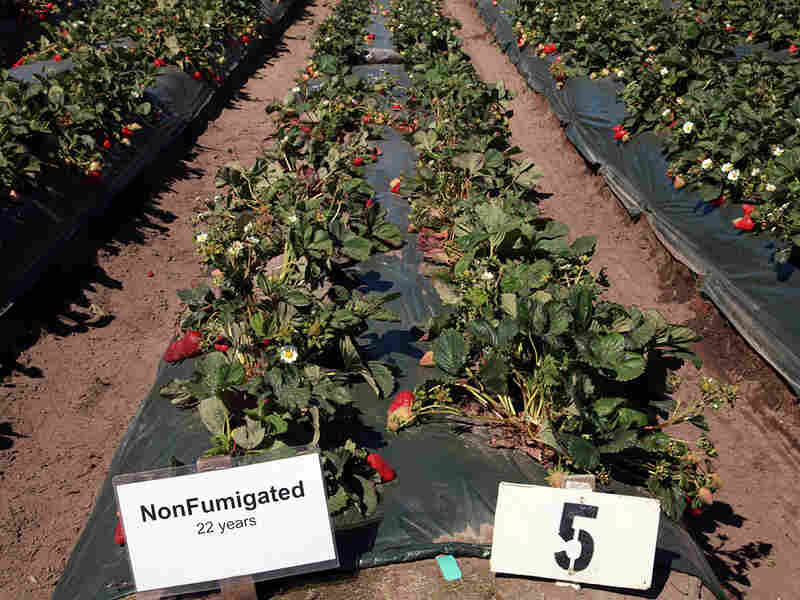 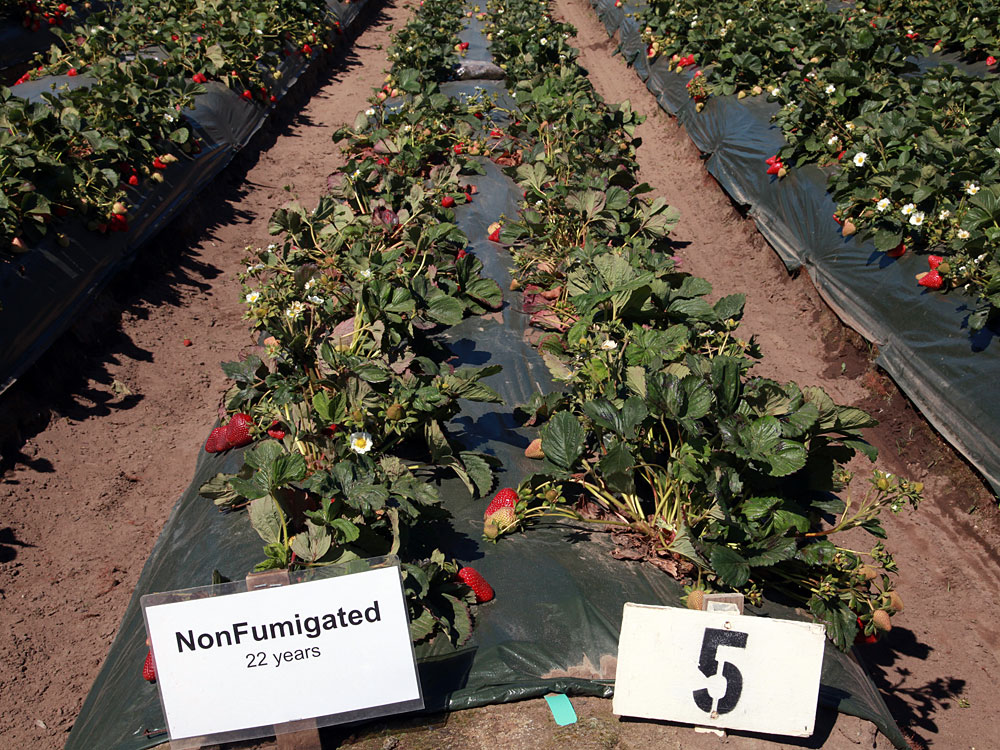 "We went through a very careful review process of all the scientific information before us," says Mary-Ann Warmerdam, director of California's Department of Pesticide Regulation.

She says methyl iodide can be used safely and points to the EPA's exposure limit for workers, which is 193 parts per billion – twice what California is proposing.

Warmerdam also points to a list of regulations intended to protect people from inhaling or coming into contact with the chemical. Things like face masks, gloves, heavy tarps and buffer zones.

Meanwhile, the EPA, under President Obama, appears to be reconsidering the previous administration's approval of methyl iodide. According to state transcripts, EPA officials say they may take another look at the chemical, depending on what happens in California.