Accessibility links
Why 'Supertasters' Can't Get Enough Salt Contrary to what scientists expected, it turns out that people with stronger taste sensations, called "supertasters," love lots of salt. The new findings help explain why some have to work harder than others to cut back their sodium intake. 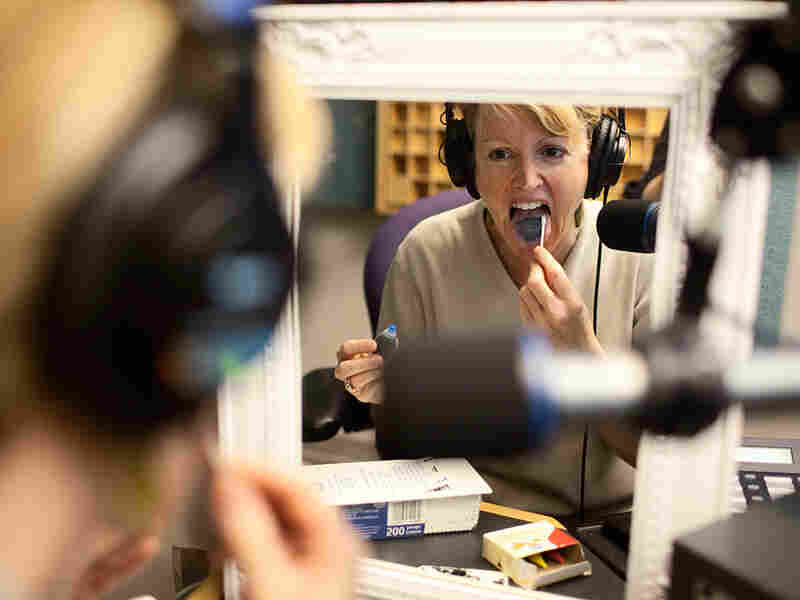 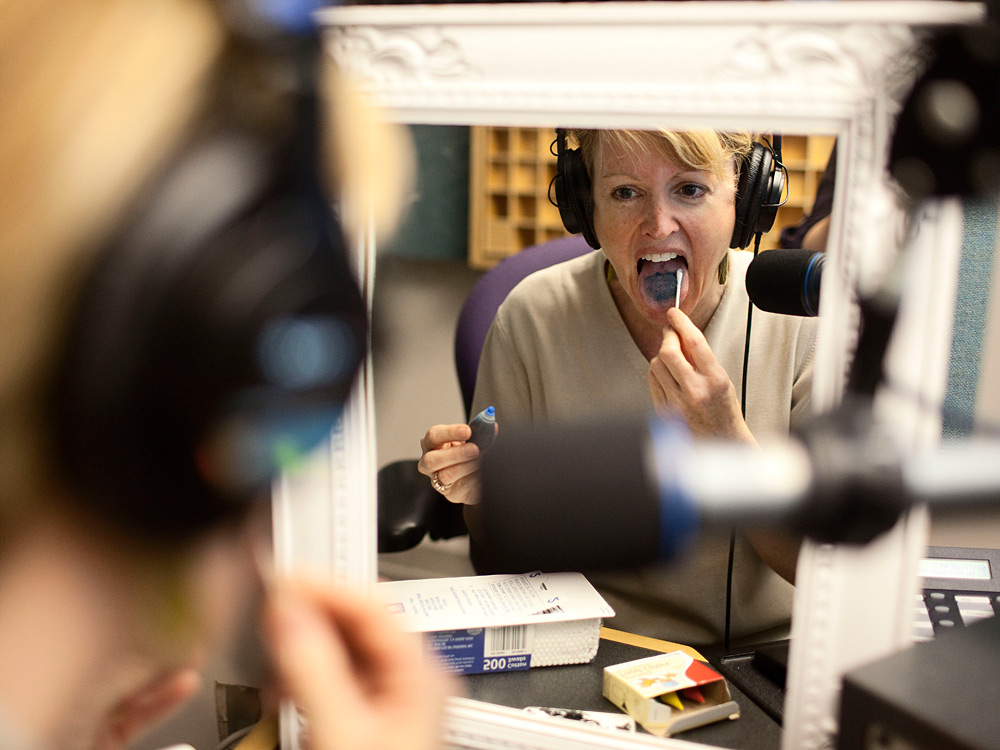 NPR's Allison Aubrey put her own tongue to the test.

Most people know that consuming too much sodium can increase your risk of high blood pressure, heart attacks and strokes. But did you know that laying off the salt shaker is harder for some than others?

One explanation may lie at the tip of our tongues -- and in our genes.

All you need for this experiment is a cotton swab and some blue food dye. Painting your tongue with a few drops of the dye is one way to gauge the density of papillae on your tongue.

"You can see these little dots on the front of your tongue," says food scientist John Hayes of Pennsylvania State University.

The little bumps are called papillae, and they're the structures which house our taste buds. People with lots of papillae usually experience tastes more intensely -- they've been dubbed "supertasters." For instance, they may sense a real bitterness in arugula or the subtle sweetness of a snap pea. So-called "non-tasters" are on the other end of the spectrum.

According to the Mayo Clinic, 77 percent of the salt in the American diet comes from processed food. Here's a look at the salt content of some common grocery items — some of the findings might surprise you. Keep in mind that the 2005 Dietary Guidelines for Americans say you should consume less than 2,300 mg of sodium per day, and the American Heart Association recommends less than 1,500 mg.

Rice: Boxed rice dinners might seem innocuous, even healthy. But Chicken Fajita Rice A Roni contains a whopping 1,000 mg of sodium per serving. That's nearly as much sodium as a McDonald's Big Mac, which has 1,040 mg. Other types of packaged rice aren't much better: Zatarain's New Orleans Style Yellow Rice has 930 mg and Near East Original Rice Pilaf has 780 mg.

Soup: Even soups that seem healthy can contain large amounts of sodium. Campbell's Vegetable Soup contains 890 mg of sodium per serving. Other soups fare better: Campbell's Healthy Request Tomato Soup clocks in with less than half that amount at 410 mg. Progresso Light Chicken & Dumpling soup has 345 mg for the same serving size. Point of comparison: A McDonald's Cheeseburger has 750 mg of sodium.

In a laboratory setting Hayes uses fancy video microscopes to examine people's tongues and count how many papillae they have. But at home you can use a mirror. That's what I did.

Hayes counted the number of papillae within a 6-millimeter area of the tongue, which is about the size of the head of a pencil eraser. And in his latest study, published in Physiology & Behavior, he found lots of individual variation.

"We saw that people had anywhere from 12 to 40 (papillae)," says Hayes. The research involved 87 healthy participants, ranging from supertasters to non-tasters. All the participants agreed to sample salty foods such as broth, chips, pretzels and cheese. Afterwards, they rated the intensity of taste and described their preferences. (Check out NPR's Richard Knox's blog post to read more about Hayes' experiments.)

Scientists have long known about the wide variation in taste preferences among individuals. "People don't all live in the same taste world," Hayes says.

But one new finding from his study did surprise him.

"We had expected that the supertasters would need less salt," Hayes says, because past studies have shown that supertasters experience stronger taste sensations from lots of foods. "For instance, we know supertasters need less fat and sugar to get to the same amount of pleasure than a non-taster does."

But with salt it turns out that the supertasters couldn't get enough. They choose higher-sodium foods than their counterparts. For instance, they opted for -- and preferred -- higher sodium chips and cheeses. 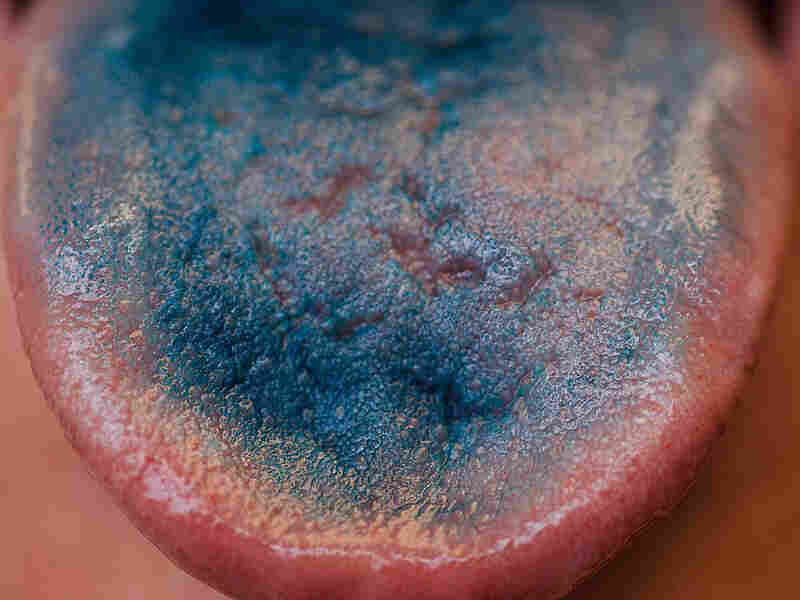 Aubrey saw lots of bumps -- but they were too small to count. Maggie Starbard/NPR hide caption 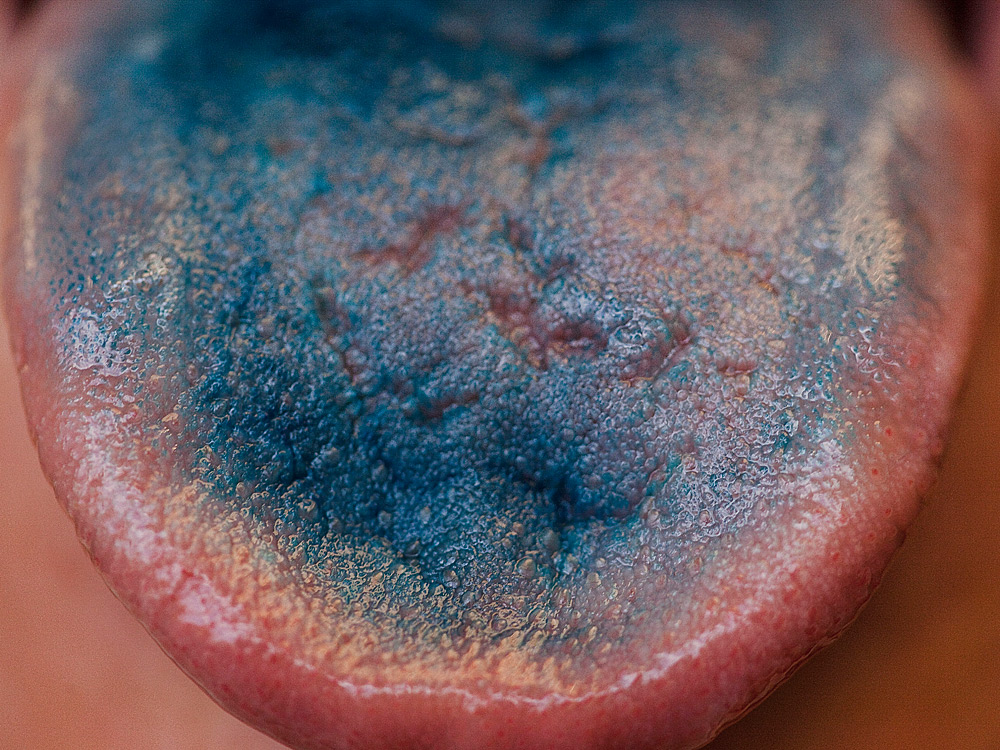 Aubrey saw lots of bumps -- but they were too small to count.

Still, Hayes says we shouldn't conclude that the density of our papillae is akin to genetic determinism. His take is that we all have free will and can choose what's healthy to eat. But when it comes to a low-salt diet, he says, "it's easier for some people to make good choices."

Oh, as for me? Turns out the density of my papillae wasn't so easy to measure. I definitely saw lots of bumps -- but they were too small to get a good count. If I really want to know, looks like I’ll have to make a trip to John Haye's lab -- and put my tongue under a microscope.