Accessibility links
Debate Over Whale Hunt Focuses On Japan The International Whaling Commission, meeting this week, will seek a compromise that would allow some whaling while trying to get Japan to end its annual hunt in the Antarctic. Japan's steadfast defense of whale hunting belies the fact that among Japanese, there is almost no appetite for whale meat or whale hunting. And, critics say, the country's stance hurts its image worldwide. 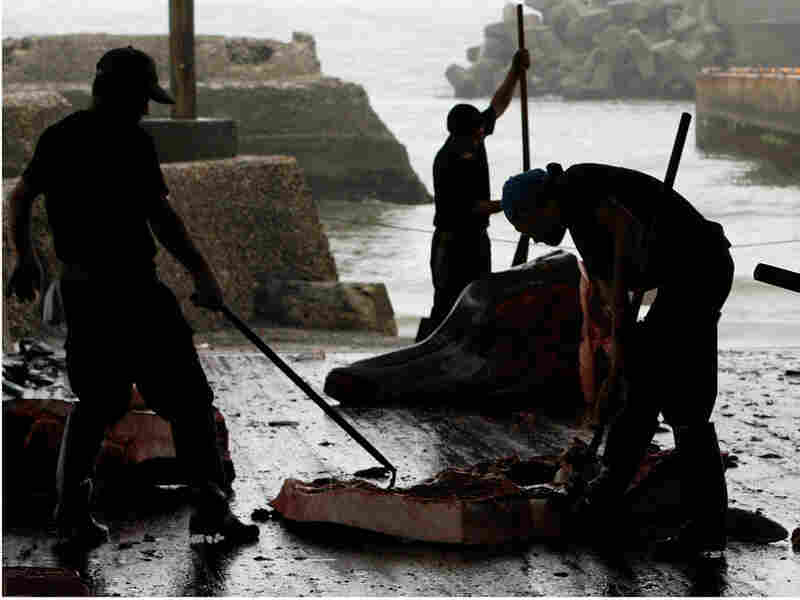 Japanese whalers haul in a Baird's beaked whale off the coast of Wada, southeast of Tokyo, in this June 2009 photo. Shuji Kajiyama/AP hide caption 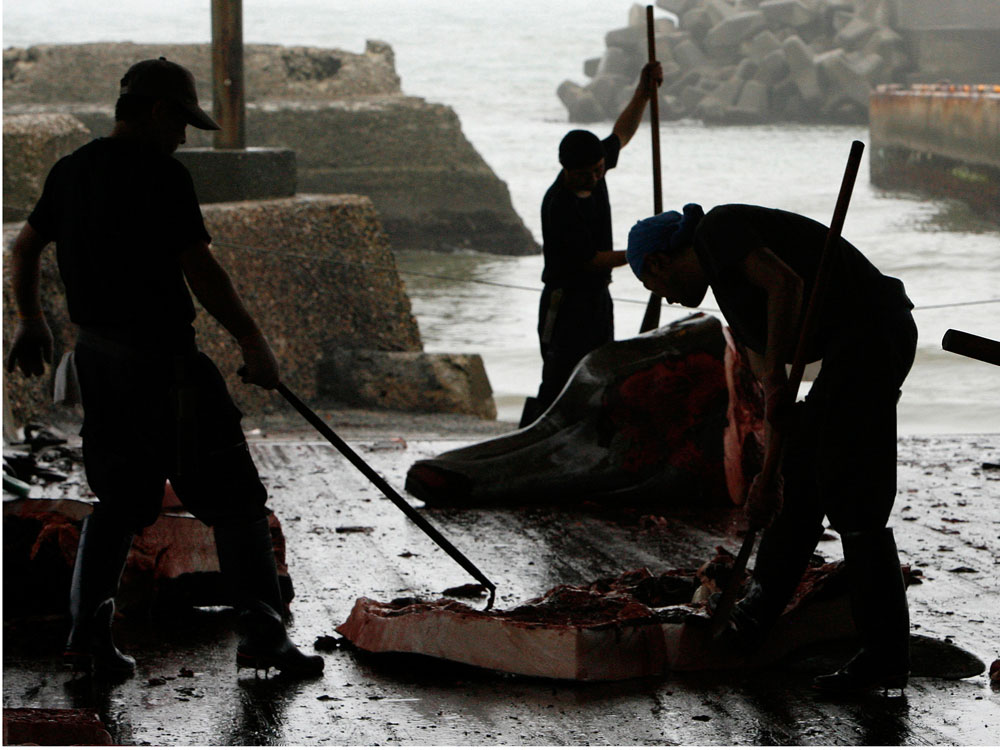 Japanese whalers haul in a Baird's beaked whale off the coast of Wada, southeast of Tokyo, in this June 2009 photo.

A showdown is expected this week among pro- and anti-whaling nations at a meeting opening Monday in Morocco. Japan, and its steadfast defense of whale hunting, will be the center of attention.

Eighty-eight countries will consider whether to formally sanction commercial whale hunts for the first time in 24 years. The International Whaling Commission will seek a compromise that would allow some whaling, while trying to find a way to get Japan to end its annual hunt in the Antarctic.

The commission placed a ban on whaling in 1986, but Japan, Norway and Iceland harvest animals annually under various exceptions. The effort at the meeting in Morocco is to end an old stalemate and fix the regulatory system.

Japan has consistently argued that whaling is a treasured part of its national culture -- and one that it subsidizes.

But the belligerent pose adopted by Japanese negotiators belies the fact that back home, there is almost no appetite for whale meat or whale hunting.

Japanese shops are packed with an impressive array of delicacies from around the world, but whale meat is as exotic to most Japanese as frogs' legs or escargots are to most Americans.

"We ate whale meat as children," says a shopkeeper speaking in Japanese. "But we didn't like it."

To be blunt, I became aware that the whaling issue was one of the best ways to lose friends for Japan.

That sentiment is typical of Japanese in middle age or older. School lunches featuring rubbery whale nuggets are etched into the collective memory of Japanese who were growing up in the lean years after World War II.

The desperate, immediate postwar period is the only time in Japanese history when whale meat was consumed nationwide.

Japan's enthusiasm for whale hunting is even harder to understand from a dollars-and-cents perspective: The business supports a few thousand jobs and generates annual revenue of around $90 million. Toyota earns about that much every two weeks.

But Japan's whaling rhetoric is rooted in national pride and the need to fend off what is seen here as the high-handedness of Western nations.

Attacks at sea by Greenpeace and other groups on Japanese whaling ships have played into the hands of Tokyo's whaling negotiators, who have portrayed the made-for-TV brawls as eco-terrorism.

Masayuki Komatsu led Japan's whaling negotiations until his retirement from the fisheries ministry three years ago.

"This is a matter of the principle [of] sustainable use and science and principle of the convention. So that's why we must exercise our own right to be heard by any other countries," Komatsu says.

Komatsu, who says he doesn't care for whale meat himself, once called whales "the cockroaches of the sea."

In the early 2000s, "there were plenty of minke whales in Antarctica, in the Northern Hemisphere, and the production rate is so quick compared with other animals," Komatsu says.

But Japan's official passion for whaling is at odds with widespread public ignorance and apathy, says Tomohiko Taniguchi, an adjunct professor at Tokyo's Keio University.

"I think there's a great irony here. First of all, people don't pay attention that much to whale meat, and many people are not probably aware even that the Japanese government is still involved in this whaling business," Taniguchi says.

"The media pays very little attention to this issue. Ironically, a very small minority group gets a disproportionately big voice. The stake involved is so small, so Japanese government has very little stake in this," Taniguchi says.

Taniguchi himself had no interest in whaling until he was forced to defend Japan's position, as a spokesman for the Japanese Foreign Ministry.

Now retired from the civil service, Taniguchi is among a small but growing number of critics within Japan who say it's time for Tokyo to stop hurting its image worldwide.

Not Popular With The International Community

"It is not illegal. But I became aware that by sticking to this minor, minor issue, Japan was gradually losing its friends from the international community," Taniguchi says.

"To be blunt, I became aware that the whaling issue was one of the best ways to lose friends for Japan," he says.

Taniguchi favors the compromise whaling proposal, which would vastly downsize Japan's hunt in exchange for allowing it to pursue small-scale coastal whaling.

He says Japan's government-subsidized hunts in the Antarctic have flooded the market with whale meat, depressing prices and further damaging Japan's coastal communities where whaling matters the most.