Accessibility links
Green Marines: Camp Lejeune Buys Into Solar Power The Marine Corps' Camp Lejeune in North Carolina is becoming one of the largest solar panel communities in the United States. Solar energy can heat up to three-quarters of the water used in a typical household. 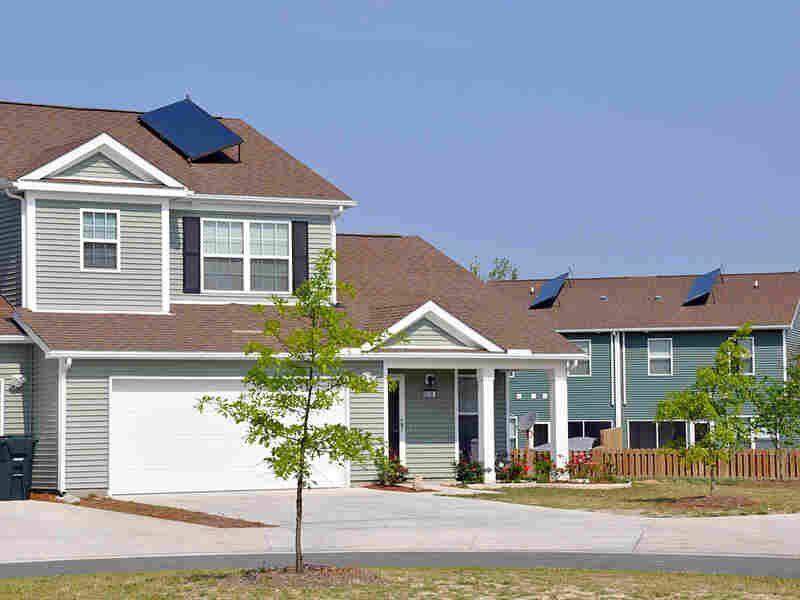 Solar panels recently installed at Camp Lejeune, like the ones on these two homes, are expected to provide nearly 75 percent of the hot water for the homes. Lance Cpl. Damany S. Coleman/Courtesy of The Globe hide caption 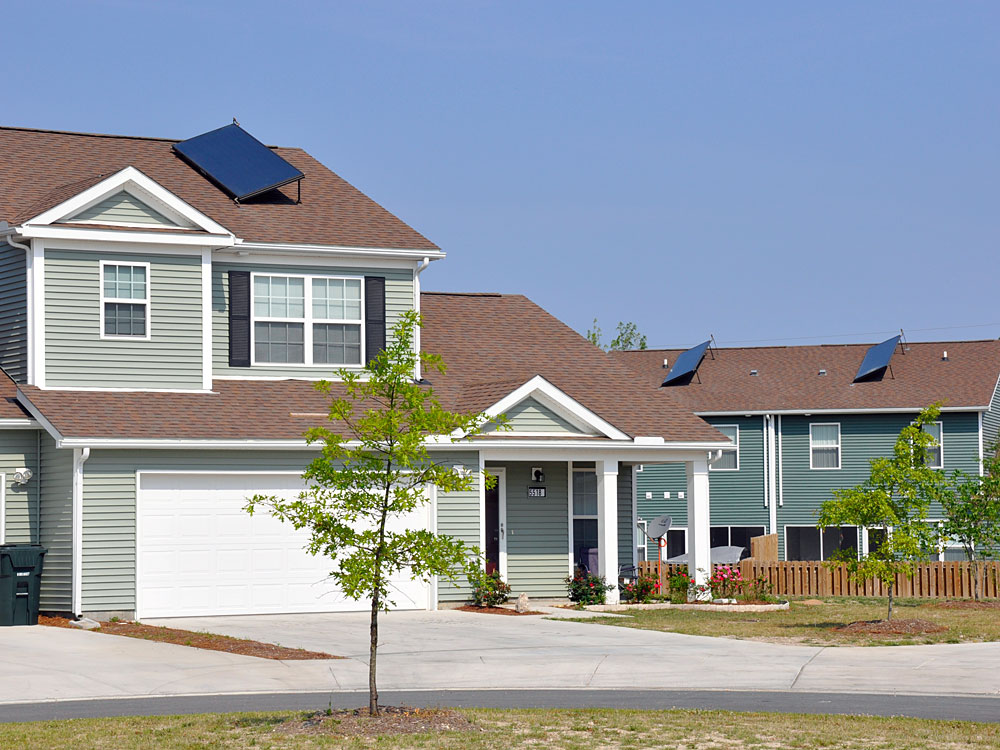 Solar panels recently installed at Camp Lejeune, like the ones on these two homes, are expected to provide nearly 75 percent of the hot water for the homes.

On the Camp Lejeune Marine Corps base in North Carolina, large, reflective rectangles line the rooftops of some of the homes.

But they're not some high-tech military gadget or even a satellite dish to get the latest TV channels: They're solar panels for heating water.

So many of these panels have gone up in one neighborhood that the community is quickly becoming the largest in the continental U.S. to heat water with solar energy.

An American flag flies from the porch of Sgt. Kirk Paulsen and his wife's light brown house. The Paulsens live on the corner of a cul-de-sac where every home on the block has a 10-by-4 solar panel smack in the middle of the roof. The solar panel is a new addition to the Paulsen home. One they're proud of.

"It's kinda like a milestone in our history books for the Marine Corps, for the state of North Carolina and for the continental U.S.," Paulsen says. "So I feel very proud of that -- that we're conserving it for our children's children's children."

When we're taking a shower and whatnot, the water is always nice and warm when we want a warm shower on a cold day. There's always warm water available

Sgt. Kirk Paulsen, whose home was recently outfitted with a solar panel

Eventually solar panels will sit on top of 900 homes in this Camp Lejeune neighborhood.

How The Panels Work

Michael Shore, the president of FLS Energy -- the company behind the solar panels -- says they act like a greenhouse: They heat a fluid that runs down pipes inside the house and transfer the heat into a 40-gallon water tank with temperatures reaching 180 degrees.

Shore says solar hot water is one of the most cost-effective ways to generate energy.

"We have this myth in this country that renewable energy's expensive," Shore says. "And here, Camp Lejeune and the house company are saving money through solar [energy], so I think we are really in the midst of a shift in how our nation gets its energy."

Shore says energy from the sun can heat three-quarters of the water used in a typical household. But Marines living on base don't pay utility bills. So who's saving money?

Camp Lejeune, sort of. FLS buys all of the solar panels and equipment and sells the hot water to the company that runs Camp Lejeune's on-base housing.

FLS has done this before with populations of individuals who don't have to foot the water bill themselves. It has tacked solar panels on top of hotels, college dorms, prisons -- places that use a lot of hot water.

"So the military was the next, and maybe the best, frontier just because there is so much hot water that's used on a base," Shore says.

It'll cost FLS $6 million to hook up all 900 homes on base to solar water heaters. For the average civilian homeowner the out-of-pocket cost can run as much as $7,000. Paulsen and his wife, Jamie, have only had their solar water heater for a few weeks. But they say so far, there have been no surprise cold showers.

"When we're taking a shower and whatnot, the water is always nice and warm when we want a warm shower on a cold day," Kirk Paulsen says. "There's always warm water available."

After conquering the Marines, FLS Energy has its sights on bringing solar water heaters to families in the other branches of the military.