Accessibility links
More Asian-Americans Signing Up For The Army Asian-Americans have typically volunteered at the lowest rate of any ethnic group. But that seems to be changing. That could be in part because the U.S. isn't in a war with an Asian country. It also may be because they have more high-profile role models, like Maj. Gen. Antonio Taguba, who led the Abu Ghraib investigation. 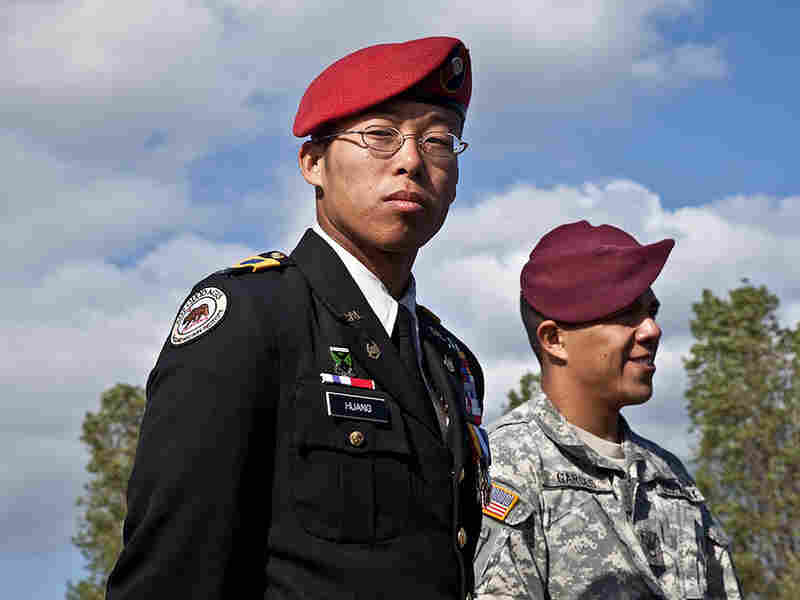 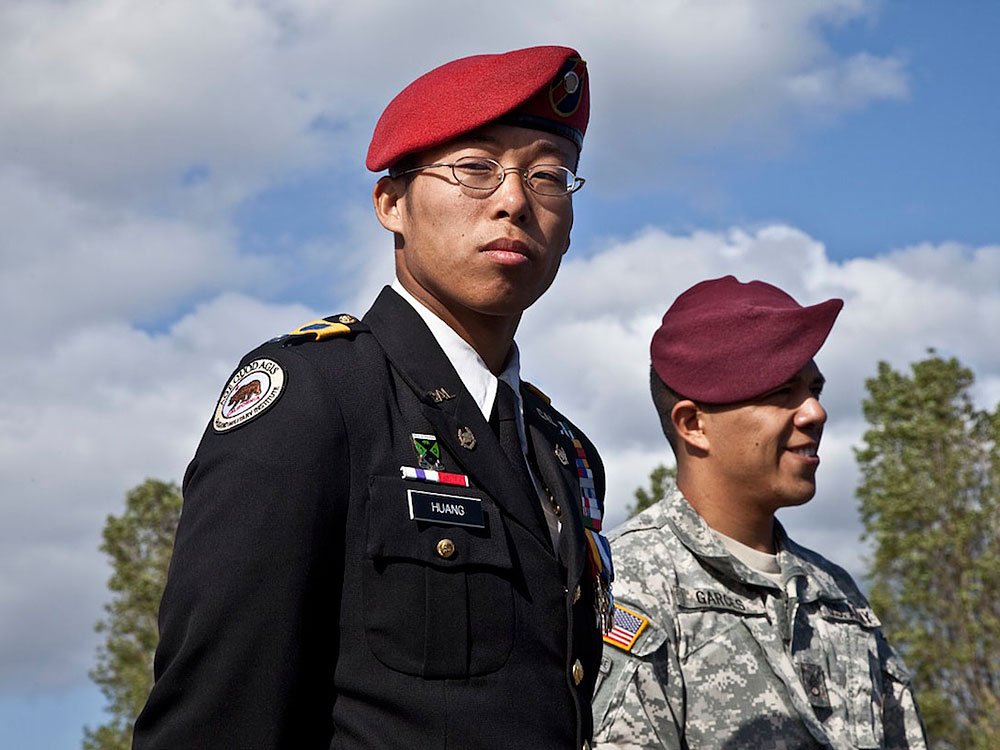 New recruit Barry Huang (left) stands with Staff Sgt. Garces at the Hilltop Mall Army Recruiting Station in Richmond, Calif. Huang signed up to get his college education paid for, but he's interested in a noncombat role.

In the U.S. Army, Asian-Americans have typically volunteered at the lowest rate of any ethnic group. They make up 4 percent of the population, and only 1 percent of military recruits.

But that seems to be changing. Something is suddenly drawing Asian-Americans in California into the Army at a remarkable rate. And there have been similar increases in other Asian-American population centers, like Seattle and New York.

In Los Angeles County last year, 22 percent of Army recruits were Asian-Americans -- almost twice their proportion in the population. In the San Francisco Bay Area, the sign-up rate is also spiking. The proportion of newly enlisted soldiers who are Asian-Americans this year is nearly double that of last year.

Of 15 incoming soldiers at the recruitment station, seven are Asian Pacific Islanders, including Albert and Barry Huang. They're 18-year-old twins who speak Cantonese at home and English outside of home. They tend to finish each other's sentences.

"Do what our parents want us to do," says Barry. "Which is go to college, get an education."

Barry calls the marching orders for the recruits. This is his route to college.

"Now that the economy has gone down and the tuition's gone up -- the Army, they can pay for my college, so I was like, might as well do it," Barry says.

The military's education benefits have become particularly appealing in this stumbling economy with skyrocketing college costs. That's one reason Asian-Americans, with their traditional emphasis on education, are increasingly joining the Army.

But Ken Mochizuki, who co-authored a book about Asians in the military, says new Asian-American recruits are motivated by more than education.

"In the present war, they're not fighting against Asians like in WWII or Vietnam," he says.

Mochizuki says today's young soldiers were born after World War II, Korea and Vietnam -- all wars in which the U.S. fought Asians. So this generation of Asian-Americans "want to prove their loyalty to this country and [that] they're as American as anybody else," he says.

Yet increased recruitment of Asian-Americans doesn't mean that more are on the front lines.

The majority are in combat service support, technical support or computer support, according to Betty Maxfield, the chief of personnel data for the Army.

She says Asian-Americans more commonly go into noncombat jobs rather than become front-line fighters. Soldiers who focus on the military's education benefits, she says, train in jobs that can translate to civilian life -- like technology or medicine rather than rifles or sharpshooting.

The Huang twins say that for them, finding noncombat roles is also cultural and religious. Their mother is Buddhist.

Asian-Americans -- like four-star Gen. Eric Shinseki, the secretary of the Department of Veterans Affairs; and Maj. Gen. Antonio Taguba, who led the investigation into abuses at the Abu Ghraib prison in Iraq -- have also become more visible in the Army. The most potent reason that young Asian-Americans are increasingly joining the Army may just be because they now see prominent soldiers who look like them.