Accessibility links
Movie Review - 'Knight And Day' - Tom Cruise, Firmly In Control Think Tom Cruise's movie-star luster was lost forever after the actor jumped on Oprah's couch -- and, some said, off the deep end? Think again. Cruise is in top action-hero form in Knight And Day, a spy-vs.-spy comedy that critic Kenneth Turan calls "the most entertaining made-for-adults studio movie of the summer." 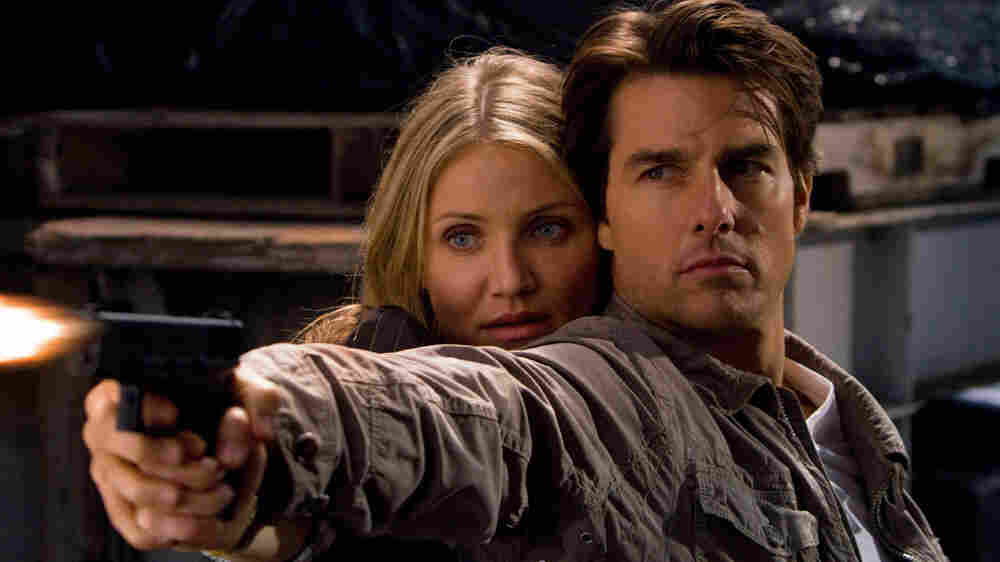 Rated PG-13 for sequences of action violence throughout, and brief strong language

Why is everyone giving Tom Cruise such a hard time? Can't we just forget about what happened on Oprah's couch? Is that asking too much? Is the movie business so flush with charismatic stars -- above-the-title names who can make carrying a picture look easy -- that it can afford to eat its young? I don't think so.

If you doubt Cruise's skills in the star department, Knight and Day will make you a believer. This is by no means a perfect film, but it is the most entertaining made-for-adults studio movie of the summer. And the reason it works is the great skill and commitment Cruise brings to secret agent Roy Miller, someone who's cool under pressure -- and who does everything just that little bit better when he's wearing sunglasses.

Knight and Day is a genial romantic thriller that very much wants to duplicate the success of Cary Grant/Alfred Hitchcock entertainments like North By Northwest and To Catch A Thief. It co-stars Cameron Diaz, who supplies her own kind of charisma as an innocent bystander who gets in way over her head in a series of spy-vs.-spy shenanigans.

Knight and Day is also fortunate to have James Mangold in charge. The director of Walk The Line and 3:10 To Yuma is one of the few filmmakers who have an instinct for intelligent popular entertainment. His films don't end up on 10-best lists, but you walk out of them feeling you've gotten what you paid for, and that is an increasingly rare commodity.

Knight and Day also features a ton of action, including a wild car-and-motorcycle chase through the winding streets of Seville. It can seem at times like the film is throwing too much at the audience, it's true -- but inevitably it's Cruise who comes riding to the rescue.

For Roy Miller is not only a peerless action machine; he's also an unflappable and unfailingly polite gentleman, always ready with a compliment or a comforting remark for Diaz's June Havens, no matter how chaotic the situation. Cruise's charming facility with Miller's deadpan spyside manner is this film's secret weapon -- and yet another reason why we should put Oprah's couch in storage once and for all.