Accessibility links
Why Dawn Is The Bird Cleanser Of Choice For Oil Spills Whether it's a sea turtle, a brown pelican or human skin, if it's coated with oil, the product being used to clean it is likely to be Dawn dishwashing liquid. Ironically, petroleum is a key ingredient in the detergent. 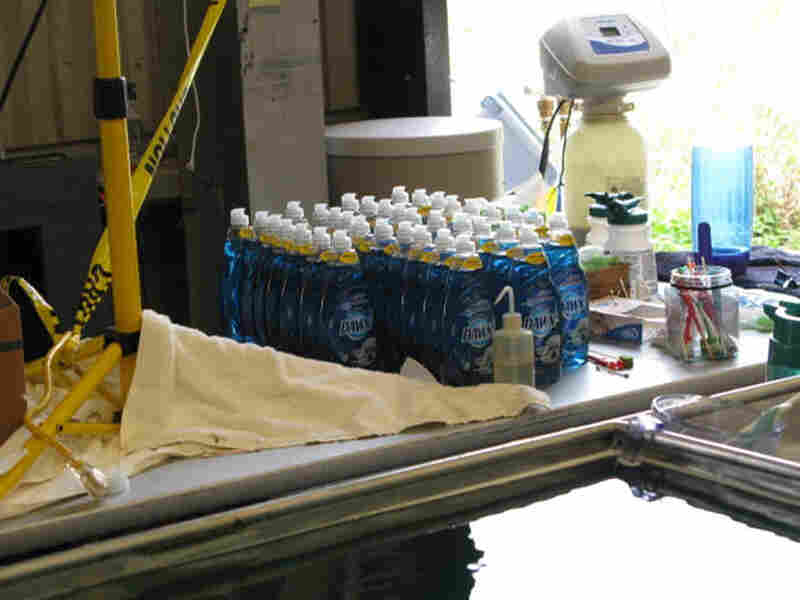 At a warehouse turned bird bathhouse in Venice, La., dozens of bottles of Dawn stand like soldiers behind a row of deep sinks. Elizabeth Shogren/NPR hide caption 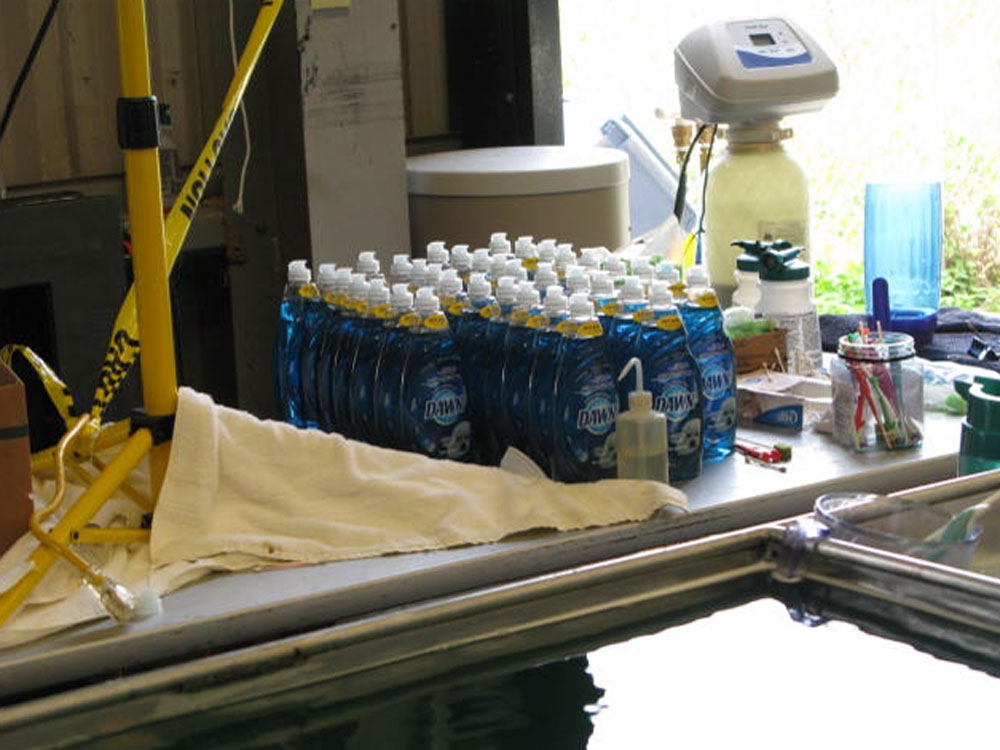 At a warehouse turned bird bathhouse in Venice, La., dozens of bottles of Dawn stand like soldiers behind a row of deep sinks.

Dawn dishwashing detergent is used to clean up just about anything covered with oil -- from birds to sea turtles to human skin. But what makes Dawn so effective?

At a warehouse turned bird bathhouse in Venice, La., dozens of bottles of Dawn stand like soldiers behind a row of deep sinks. It takes three people as much as an hour to get the gooey oil off each pelican. They start by rubbing the bird with cooking oil; veterinarian Heather Nevill says that loosens the sticky petroleum. Then one of the crew sprays it with dish liquid.

"She's scrubbing very vigorously, getting her fingertips under the feathers to really agitate the feathers in the water," Nevill says. "It's that action of getting the detergent into the feathers that really removes the oil."

The bird is covered with a lot of suds.

"We're using very heavy concentrations of Dawn because this crude oil has become very weathered, and it's very difficult to remove," Nevill adds.

When asked whether they have to use Dawn, Nevill replies, "Dawn definitely works the best. It very effectively removes grease but does not cause harm to the skin of the birds."

Nevill and the rest of the workers at the International Bird Rescue Research Center sound like walking commercials for Dawn. And that's not new.

NPR's Daniel Zwerdling discovered this when he interviewed the group's founder, Alice Berkner, during the 1989 Exxon Valdez disaster in Alaska.

Zwerdling joked, "You're going to get letters from Ivory and the other companies."

"I hate to sound like an advertisement," Berkner said, "but I won't allow any substitutes for Dawn."

And in the BP spill, Dawn isn't just for birds. Even boat captains swear by it.

Kirk Prest, who ferries biologists through the oily waters, says he uses Dawn all the time.

"Just to clean my hands several times during the day," Prest says. "It cuts the oil the best out of the different soaps. I would say most of the folks working this cleanup know that."

Even before the explosion on the Deepwater Horizon drilling rig, Procter & Gamble was using Dawn's oil spill credentials to sell its detergent. It also has raised $500,000 for wildlife groups.

Dawn spokeswoman Susan Baba says all the attention Dawn is receiving because of the spill helps get out the message that Dawn is a strong cleaner with a gentle touch.

"This tension between toughness and mildness has always been something that's kind of challenging to communicate to consumers," Baba says. "So in a communications standpoint, it's been great."

She says the reason Dawn is so good at cleaning birds without hurting them is that it was designed to erase grease from dishes without harming hands. The exact formula is a secret, but she says the key is balancing the surfactants -- the chemicals that cut the grease.

What the company doesn't advertise -- and these days is reluctant to admit -- is that the grease-cutting part of the potion is made from petroleum.

"To make the best product out there, you have to have some in there," says Ian Tholking of Procter & Gamble. He says less than one-seventh of Dawn comes from petroleum.

"To say Dawn's horrible because of this, that doesn't make a whole lot of sense," he says, "and that's what we're trying to avoid. Because we're not trying to do something evil here."

"I think it's extremely ironic," says Martin Wolf, a chemist for Seventh Generation, which makes a dish liquid without petroleum. "Here we are trying to squeeze every last drop of oil we can out of the Earth, and it's despoiling the Earth. And we're using that same product that's messing up the Earth to clean it up."

Wolf says his company sent a truckload of oil-free detergent to the gulf, but he hasn't heard whether anyone has used it.

Veterinarian Nevill says she knows there are greener cleaners, but she says none of them have Dawn's magic. Asked whether she has a special connection to Dawn now, and whether she uses it at home, Nevill laughs, "You're not supposed to ask questions like that to an eco-hippie."

Besides, Nevill says, Procter & Gamble donates tons of the sudsy stuff, so she has a lot of it left over around the house.