Accessibility links
Top U.S. General In Afghanistan Called To D.C. White House officials say Gen. Stanley McChrystal has been summoned to Washington to explain his controversial comments in a Rolling Stone profile that casts him as a lone wolf on the outs with key figures in the Obama administration. 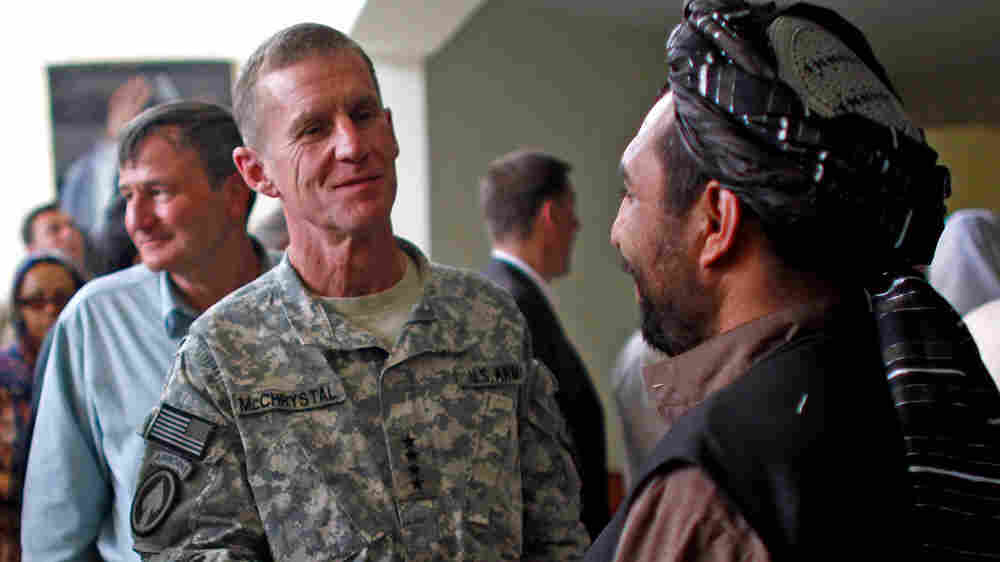 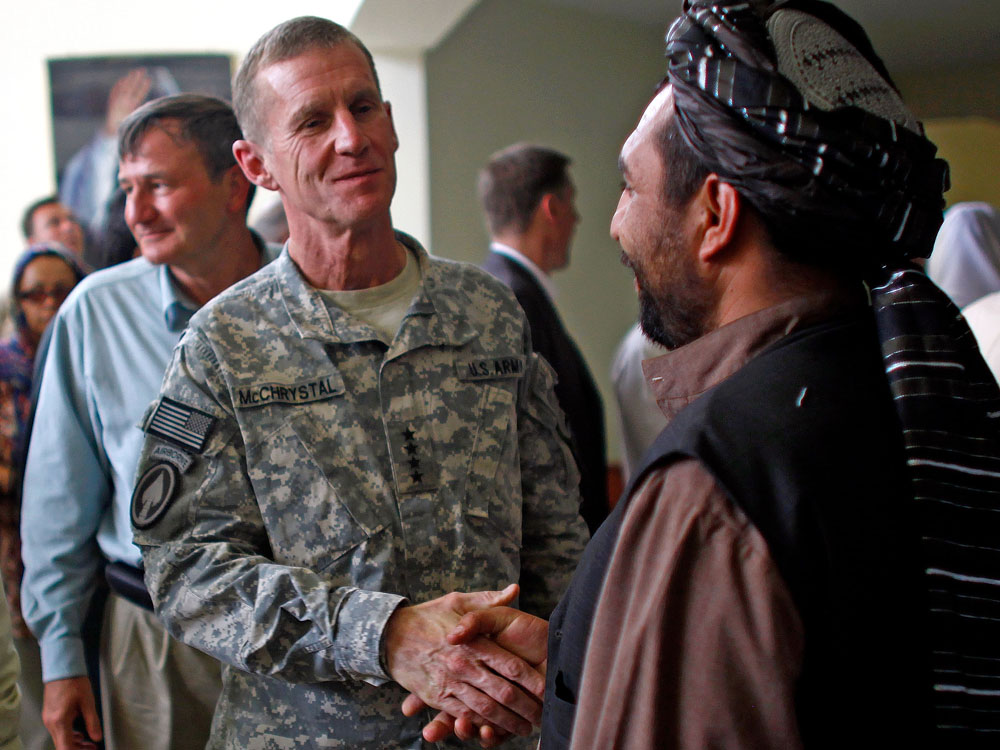 President Obama and Gen. Stanley McChrystal agree on one point: The top U.S. commander in Afghanistan used "poor judgment" in an interview with Rolling Stone magazine.

that has stirred speculation McChrystal is about to lose his job.

McChrystal has been summoned to Washington to explain derogatory comments about Obama and his colleagues, administration officials said Tuesday.

Speaking to reporters after a Cabinet meeting Tuesday, President Obama said McChrystal showed "poor judgment" in a magazine story in which the war commander and his aides disparaged the president and other members of the administration.

I extend my sincerest apology for this profile. It was a mistake reflecting poor judgment and should never have happened.

McChrystal had used precisely the same phrase earlier Tuesday after being ordered to attend the monthly White House meeting on Afghanistan and Pakistan in person Wednesday rather than over a secure video teleconference.

He expected to explain his comments to Obama and top Pentagon officials, said officials who spoke on condition of anonymity because they were not authorized to speak publicly.

Asked whether he would fire McChrystal, Obama said he planned to talk McChrystal face-to-face before making any decision.

"I think it's clear that the article in which he and his team appeared showed a poor -- showed poor judgment," the president said. "But I also want to make sure that I talk to him directly before I make any final decisions."

Obama has the authority to fire McChrystal. His predecessor, Gen. David McKiernan, was sacked on grounds that the military needed "new thinking and new approaches" in Afghanistan.

Chairman of the Joint Chiefs of Staff Adm. Mike Mullen has told McChrystal of his "deep disappointment" over the article, a spokesman said.

The article in this week's Rolling Stone depicts McChrystal as a lone wolf on the outs with many important figures in the Obama administration and unable to persuade even some of his own soldiers that his strategy can win the war.

The interview describes McChrystal, 55, as "disappointed" in his first Oval Office meeting with Obama. The article says that although McChrystal voted for Obama, the two failed to connect from the start. Obama appointed McChrystal to lead the Afghan effort in May 2009. Last fall, though, Obama called McChrystal on the carpet for speaking too bluntly about his desire for more troops.

"I found that time painful," McChrystal said in the article, which will be on newsstands Friday. "I was selling an unsellable position."

Obama agreed to dispatch an additional 30,000 U.S. troops to Afghanistan only after months of study that many in the military found frustrating. And the White House's troop commitment was coupled with a pledge to begin bringing them home in July 2011, in what counterinsurgency strategists advising McChrystal regarded as an arbitrary deadline.

In Kabul on Tuesday, McChrystal issued a statement saying: "I have enormous respect and admiration for President Obama and his national security team, and for the civilian leaders and troops fighting this war and I remain committed to ensuring its successful outcome."

"I extend my sincerest apology for this profile," the statement said. "It was a mistake reflecting poor judgment and should never have happened."

Mullen talked with McChrystal about the article Monday night, said Capt. John Kirby, Mullen's spokesman. In a 10-minute conversation, the chairman "expressed his deep disappointment in the piece and the comments" in it, Kirby said.

The Rolling Stone profile, titled "The Runaway General," emerged from several weeks of interviews and travel with McChrystal's tight circle of aides this spring.

In the interview, McChrystal said he felt betrayed by the man the White House chose to be his diplomatic partner, Ambassador Karl Eikenberry. If Eikenberry had the same doubts, McChrystal said he never expressed them until a leaked internal document threw a wild card into the debate over whether to add more troops last November. In the document, Eikenberry said Afghan President Hamid Karzai was not a reliable partner for the counterinsurgency strategy McChrystal was hired to execute.

McChrystal accused the ambassador of giving himself cover.

"Here's one that covers his flank for the history books," McChrystal told the magazine. "Now, if we fail, they can say 'I told you so.' "

Caitlin Hayden, spokeswoman for the U.S. embassy in Kabul, said Eikenberry and McChrystal "are fully committed to the president's strategy and to working together as one civilian-military team."

McChrystal has a history of drawing criticism, despite his military achievements.

In June 2006, President George W. Bush congratulated McChrystal for his role in the operation that killed Abu Musab al-Zarqawi, the leader of al-Qaida in Iraq. As head of the special operations command, McChrystal's forces included the Army's clandestine counterterrorism unit, Delta Force.

He drew criticism for his role in the military's handling of the friendly fire shooting of Army Ranger Pat Tillman -- a former NFL star -- in Afghanistan. An investigation at the time found that McChrystal was "accountable for the inaccurate and misleading assertions" contained in papers recommending that Tillman get a Silver Star award.

McChrystal acknowledged he had suspected several days before approving the Silver Star citation that Tillman might have died by fratricide rather than enemy fire. He sent a memo to military leaders warning them of that, even as they were approving Tillman's Silver Star. Still, he told investigators he believed Tillman deserved the award.

This week's development comes as criminal investigators are said to be examining allegations that Afghan security firms have been extorting as much as $4 million a week from contractors paid with U.S. tax dollars and then funneling the spoils to warlords and the Taliban, according to a U.S. military document. The payments are intended to ensure safe passage through dangerous areas they control.

The payments reportedly end up in insurgent hands through a $2.1 billion Pentagon contract to transport food, water, fuel and ammunition to American troops stationed at bases across Afghanistan.

NPR's Jackie Northam and The Associated Press contributed to this article.