Accessibility links
Reliving The Scare: Looking Back On 'Red Channels' Sixty years ago Tuesday, broadcast network executives received copies of Red Channels: the Report of Communist Influence in Radio and Television. The pamphlet listed scores of artists who allegedly supported the Communist cause. Commentator John McDonough reflects on the resulting upheaval that rocked the entertainment industry. 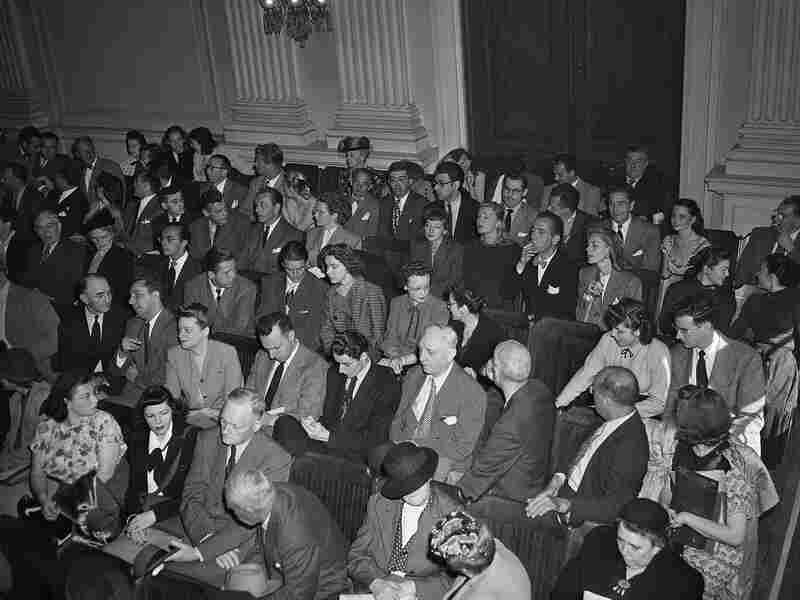 Hollywood personalities listen to a session of the House Un-American Activities Committee hearing on Communist penetration of the film industry. The hearing occurred three years before the release of Red Channels and laid some of the groundwork for the report. Actress Marsha Hunt can be found in the third row, fifth from the right. AP hide caption 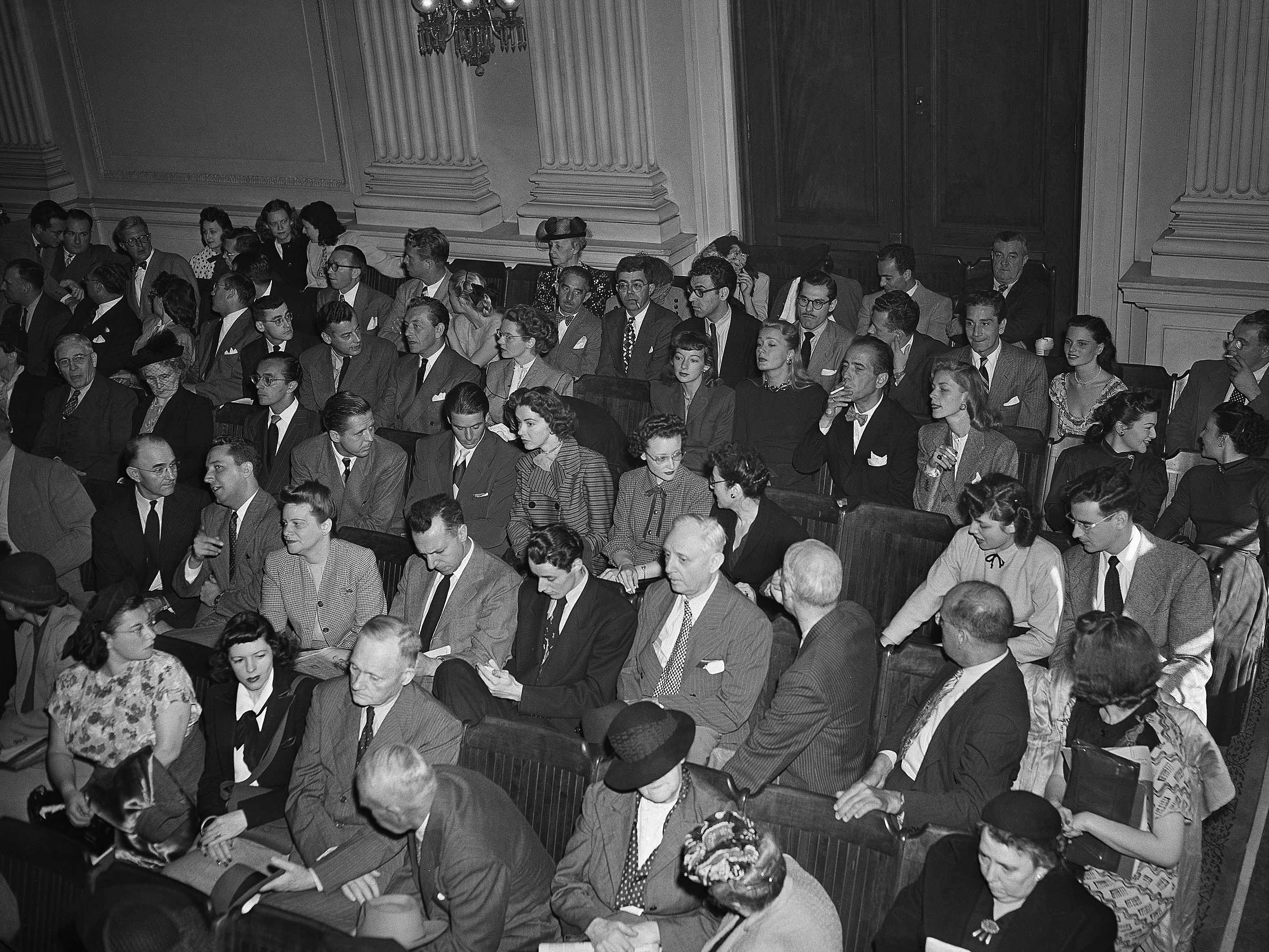 Hollywood personalities listen to a session of the House Un-American Activities Committee hearing on Communist penetration of the film industry. The hearing occurred three years before the release of Red Channels and laid some of the groundwork for the report. Actress Marsha Hunt can be found in the third row, fifth from the right.

John McDonough is a commentator for NPR.

Red Channels: the Report of Communist Influence in Radio and Television arrived quietly and discreetly. No headlines, no TV coverage. There seemed to be something a little dirty about it from the start.

Some executives wouldn't even admit to having seen a copy. But Red Channels was soon the most public secret in the industry. Among the prominent names it listed were Orson Welles, Leonard Bernstein, Arthur Miller, Lena Horne, Edward R. Murrow and Artie Shaw.

Its vigilante crusade was serious business. For example, early in 1951 George Burns introduced a new cast member on The Burns and Allen Show: John Brown. But Brown had been listed in Red Channels. After six months, he was dropped. There were a lot of stories like that.

"I was a film actress who was doing more television than anyone else because I was in New York doing plays," explains actress Marsha Hunt.

1950 looked like a banner year for her. Then in July her agent called with some strange news.

"Three different networks had offered me an ongoing show of my own on television. So I was waiting to hear from the three networks -- and I never did. And my agent explained this with two words, which I had never heard before: Red Channels. And that anyone listed in that accusatory, privately published pamphlet was just not welcome on the air anymore."

As her agent described the new order, Hunt found it almost too bizarre to be true.

"My reaction to hearing of something called Red Channels was disbelief at first. And then, though I would never have a copy of it in the house, the citations -- the six items listed beside my name, were read to me over the phone. And yes indeed, I had been there, I had done that, I had said that or signed something. All things I believed in. And I was amazed to learn that they were considered subversive in some way."

Operating out of a small office on West 42nd Street, Red Channels projected an influence that affected hiring decisions at the networks, the ad agencies and some of the largest advertisers in the country. It was all done quietly behind closed doors, at first.

The public was still largely unaware of Red Channels -- until it caught the spotlight with the Jean Muir case in August. That summer NBC cast actress Muir in The Aldrich Family. Muir's name had already appeared in Red Channels, but no one considered that important -- yet. Only when the sponsor began receiving protest letters did anyone take another look. In August, Muir was replaced before the first program aired. 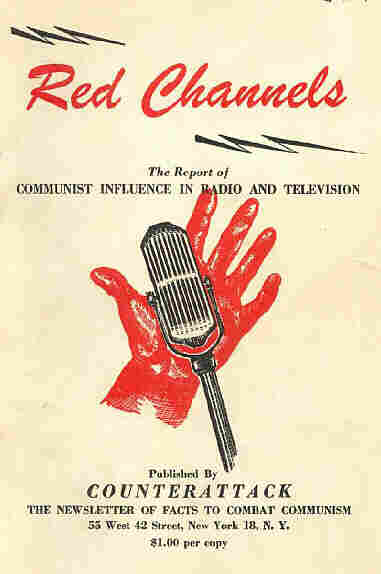 On June 22, 1950, copies of Red Channels: the Report of Communist Influence in Radio and Television were distributed to network executives along Madison Avenue. Wikimedia Commons hide caption

Unlike with Brown or Hunt, the Muir case was widely reported, along with the role played by Red Channels. The squalor of it all was embarrassing to the networks and advertisers. They decided they wanted distance and deniability. Some thought it might break the blacklist. Instead, it merely drove the process even deeper behind close doors.

Hunt says, "At the time, in New York, there was no procedure set up to try to clear your name. I did, on my own volition, write a letter to each of the major networks explaining that I knew nothing or cared nothing about communism; and that I did my best to be a good citizen during World War II; and that I hoped this would clear any confusion and that I would be permitted to resume work. I never had any kind of response to that."

Authorities were not interested in letters. They preferred a mix of humiliation and atonement.

"You had to to repent any official stand you may have taken, such as signing a petition for something you believed in. You had to repent all those activities that were cited under your name in Red Channels and to swear lifelong hatred and opposition to the Communist Party."

The decline of the blacklist was slow but steady by the late '50s, until it was largely broken by a lawsuit in 1962. Today Marsha Hunt is 92, still active, and, in a small way, still a victim of the blacklist period. She finds that a little puzzling.

"I must tell you that the interest in the blacklist era never seems to die down. I'm constantly asked about it. And the one real regret I have about this today is that I may be remembered -- and I hope not -- for having being blacklisted rather than for the work that I have done as an actor."