Accessibility links
Carnahan Plays Up Her Missouri Roots In Senate Race Robin Carnahan, the leading Democrat in the race to replacing retiring Sen. Kit Bond, is the daughter of a Democratic dynasty. On the campaign trail, she talks about her experience running her family's farm in Rolla, Mo., and how it's taught her "to know bull when I see it." 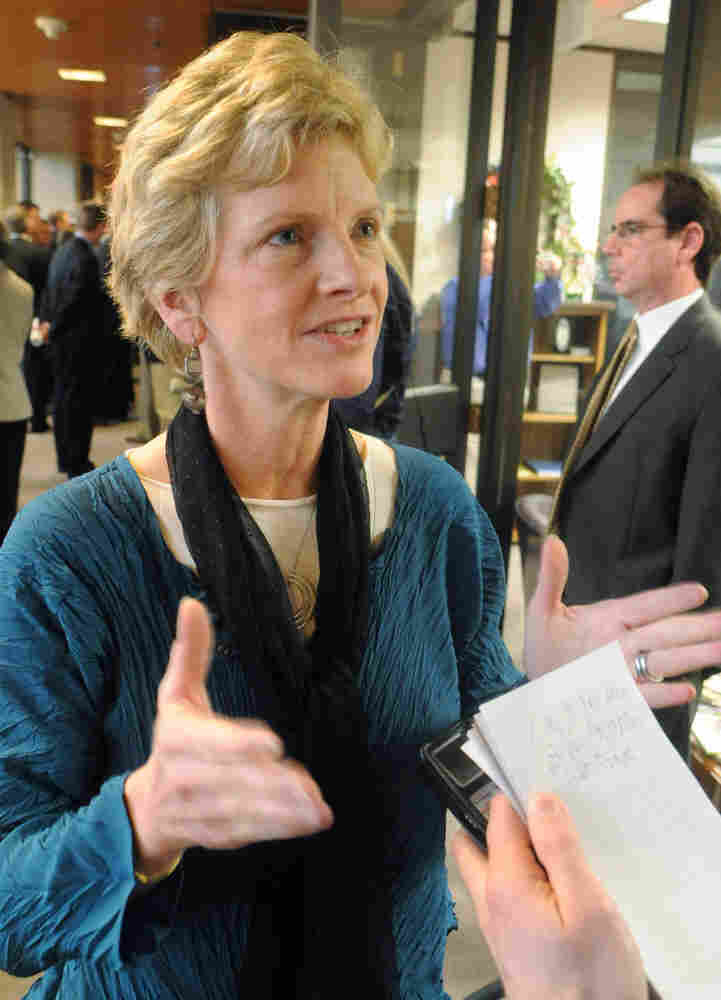 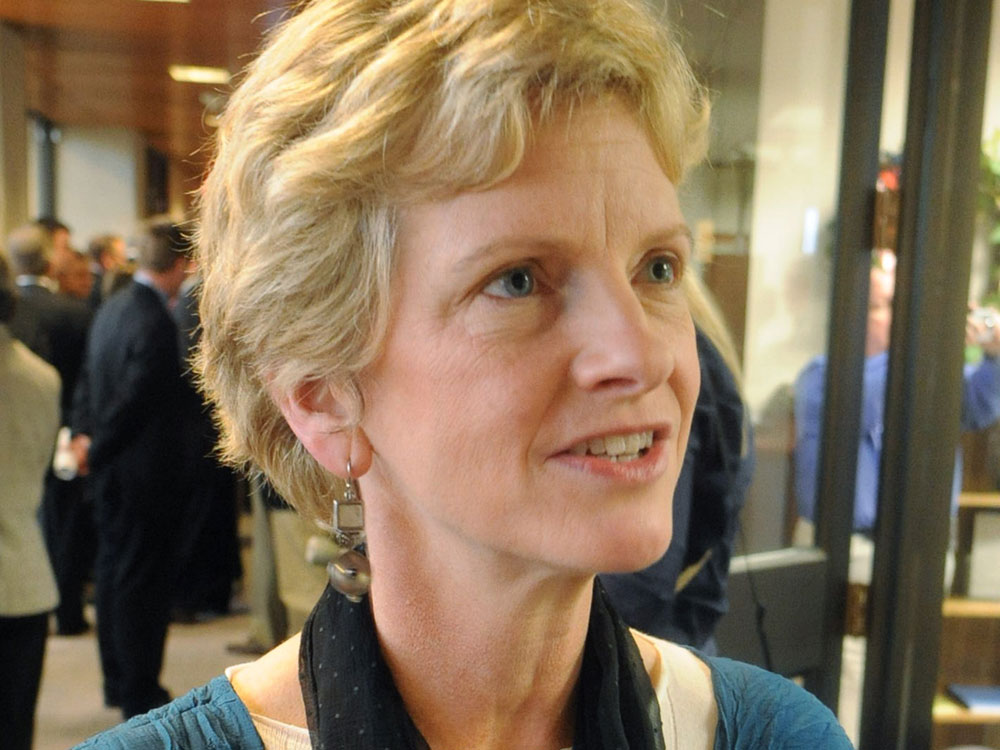 Missouri Secretary of State Robin Carnahan, shown talking with a reporter in Jefferson City, Mo., in February, is the leading Democrat in the race to replace retiring Sen. Kit Bond.

Whether it's a Senate seat or a presidential contest, Missouri always seems to be in play on Election Day in even-numbered years.

This November, there's an open Senate seat -- Republican Kit Bond is retiring. The polls show a very close race between the all-but-certain Republican candidate, Rep. Roy Blunt, and Missouri Secretary of State Robin Carnahan, the daughter of a Democratic dynasty.

Last week, in a sprawling backyard in Warrensburg, Mo., some 40 local Democrats -- the rare breed who are tuned in to a November race this early in the year -- gathered to eat barbecue and to hear Carnahan speak.

Warrensburg is a rural area. And Carnahan's stump speech draws heavily on the time she's spent running her family's farm in Rolla, Mo.

"One of the other things, you know, I learned out on the farm -- and some of you have heard me say this before -- is to know bull when I see it," she told the crowd at the barbecue.

In Missouri, Democrats count on winning the big cities. Their aim in farm country is not to lose too badly.

More On The Missouri Senate Race

The source of that bull, according to Carnahan, is Blunt, her likely Republican opponent.

"I don't know if he came through here -- he's got a big old bus that says on the side of it: 'Jobs for Missouri's Future.' Have you seen that one?" she said. "We're all for jobs for Missouri's future, but he goes and flies back out to Washington, and when he has a chance to vote for small businesses and things that are actually going to create jobs, he votes no. Guess what I call that? I call it bull."

The Carnahans may raise cattle on the farm, but more notably, they raise politicians.

Carnahan's grandfather was a congressman. Her father, Mel, was Missouri's governor. In 2000, he ran for the Senate, died in a plane crash three weeks before the election, and was elected just the same. Robin's mother, Jean, was appointed to the seat, served for two years and narrowly lost a special election. Robin's brother Russ is a congressman. And she is Missouri's secretary of state.

The 48-year-old Carnahan is also a marathon runner and a licensed pilot.

Democratic consultant Steve Glorioso tells NPR's Robert Siegel that Carnahan's biggest strength is her identity. "She is a Carnahan -- a very dynamic legacy of good government, moderate to slightly liberal politics. She is getting better and better as a public speaker. She's genuine, she's authentic, and she can portray herself as more change, certainly, than her opponent."

But Jeff Roe, a Missouri Republican consultant, takes issue with the words "genuine" and "authentic." He says Carnahan, who used to work at the Export-Import Bank in Washington, has come a long way from the farm.

"She has a real tough battle here. She acts and talks and says that she's a farmer. And that's one thing you can't fake in Missouri," Roe says. "You can either wear flannel in a commercial or you can't. And she can't. And she's so far trying to fake that. That doesn't wear well in Missouri."

When asked about that, Carnahan replied in a Missouri spirit: "Well, come on down" to the farm in Rolla, she said, "and we will take a look."

As for questions that loom larger among voters' concerns -- jobs, the economy -- Carnahan contrasted her views with the vote that Blunt cast for the Troubled Asset Relief Program aimed at aiding banks.

"Instead of bailing out big banks that created messes -- to do something that actually is going to get money back into these communities," she said, politicians need to "put this partisanship aside, understand that getting our economy going again is something that's good for all of us -- and that, in Missouri the way you do that is by focusing on small businesses. That's where jobs are created."

Carnahan says she supports tax cuts for small businesses and completing an overhaul of financial regulations "because there is a connection between the uncertainty that's created and the chilling effect that that's had on banks, community lenders and small businesses' ability to get the financing they need to create jobs and grow their businesses."

Carnahan says she knows many people had reason to think the bank bailout was necessary. But, "I got to tell you, you got to hold people accountable for the problems they create. If you don't, you create the wrong incentives."

One of the financial issues facing the next Congress will be the scheduled expiration of President George W. Bush's tax cuts. "I think we've been playing games with this issue for way too long. To have a situation where the inheritance tax has gone to zero for one year and then is about to go back in at a higher rate doesn't make very much sense," Carnahan said.

"Common sense says that we should have something that's steady and predictable that people can plan on, and I think it makes sense to put that in at the level that we used to have it, but not have it revert back to higher levels."

Carnahan says no new taxes should be imposed on the middle class, but that "we need to consider everything" when it comes to higher income brackets.

Although President Obama has lost popularity in Missouri, Carnahan says he's always welcome in the state. "I'm sure he'll be back here before the election," she says.

But, she says, "I don't think this election, in the end, is going to be about President Obama. I think it's going to be a choice between two candidates with records in public service, and I think that's what Missourians will look to."

The polls say this race is close. But political consultants point to a number that will be a better indicator come November: the unemployment rate. If that rate is down, Carnahan can win, they say, but if it stays where it is, that's very hard to see.