Accessibility links
Gates' Lawyer Challenges 'The Presumption Of Guilt' When Harvard professor Henry Louis Gates, Jr. was arrested in front of his home, one of the first people he called was his colleague Charles Ogletree. In The Presumption Of Guilt Ogletree argues that the incident should serve as a lesson on the abuse of power by police. In 2009, Harvard University professor Henry Louis Gates, Jr. was arrested in front of his home in Cambridge, Mass. on charges of disorderly conduct. The charges were dismissed four days later but one of the first people Gates called after his arrest was his colleague at Harvard, Charles Ogletree.

The Presumption Of Guilt is Ogletree's book about the arrest and its aftermath. In it he argues that the incident should serve as a lesson on the abuse of power by police, and law enforcement's systemic suspicions about black men.

"We would think that, in the year 2010, we would be past these issues of confrontations, particularly between professional black men and police," Ogletree tells NPR's Neal Conan. "But the reality that this clash occurred ... means that we still have a long way to go." 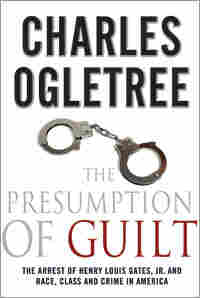 In the book, Ogletree writes that the charge of disorderly conduct in this context usually means "contempt of cop." Ogletree says Gates "did mouth off to the police officer, and there's no denying that."

According to Ogletree, Gates gave the officer his Harvard identification -- which has his picture -- and his license -- which has his picture and address. He also asked the officer, "Why are you doing this? Give me your name. Give me your badge number. I'm going to file a complaint." But as the officer refused to comply with his requests, Gates' anger and frustration grew. Ogletree says Gates "never cursed, never seemed demeaning, but had this righteous indignation that he was not respected in his own house by a police officer who could have called the Harvard University police and verified that he was in his own house -- that he was not a burglar."

Ogletree sees two reasons the incident got out of hand: race and class.

"I think that some of this is a traditional town/gown problem," he says. On one side you have the working-class police officer and on the other the well-known Harvard professor.

Ogletree says, "I think the clash of those personalities on July 16 is what led to the escalation and the ultimate claim that Gates was engaged in disorderly conduct."

Excerpt: 'The Presumption Of Guilt'

Sgt. James Crowley is a Cambridge native who once worked for the Harvard University Police Department for three years as an ofﬁcer on the graveyard shift. Professor Henry Louis Gates, Jr., has been on the Harvard faculty for nearly two decades. Yet their paths had not crossed formally (or, to their knowledge, informally) in that period of time. On July 16, 2009, Gates and Crowley, who was serving in his eleventh year in the Cambridge Police Department, found themselves on a collision course with history. Their lives changed instantly, as the story of their meeting drew national and global attention. Ultimately, the Crowley/Gates affair itself may fade into history, but the events of that day and beyond will reverberate for some time, given the combustible ingredients of race, class, and crime.

The irony of the events as they unfolded is not only that Professor Gates and Sgt. Crowley are as different as day and night, left and right, and Black and White, but also that such an esteemed ﬁgure on the subjects of race and equality would ﬁnd himself in any confrontation with the police. Professor Gates has received dozens of honorary degrees and national awards and has been hailed as one of the nation’s leading intellectuals. He has been afﬁliated with the Institute of Advanced Studies at Princeton University, has taught at Duke and Yale, and, since 1991, has been the Alphonse Fletcher University Professor at Harvard University. While Professor Gates is known widely for his role at Harvard University, he had traveled there literally and ﬁguratively thousands of miles and many years away from his humble birthplace in West Virginia.

Gates was born in Keyser, West Virginia, on September 16, 1950. While Gates was still in middle school, his parents learned that their son, a very active and outgoing child, had polio, necessitating several operations and extensive medical care throughout his childhood. One of the consequences of his early health problems is that one leg is shorter than the other, such that he needs a cane to get around.

Gates grew up in Piedmont, West Virginia, during a time when segregation was the norm, and every opportunity for African Americans to assert their racial pride was memorable for him. He shared stories in his best-selling memoir, Colored People, about the famous and infamous Black men and women who were celebrated and condemned in the Black section of Piedmont. Both proud of and at times disappointed in the Black cultural experiences in the town, he learned much and grew intellectually as a result of them. Gates attended the local Piedmont High School before going on to Yale for his BA, graduating summa cum laude, and to the University of Cambridge in England for his PhD in English Literature.

James Crowley grew up in North Cambridge, a working-class community that also contained a rising middle-class population. Cambridge is affectionately known as the People’s Republic of Cambridge for its progressive politics. Despite the generally liberal ideology, residential segregation, based upon income and personal preferences (by Blacks and by Whites), was prevalent during Crowley’s formative years. Following the lead of his older brother, he attended the only public high school in Cambridge, known as CRLS, the Cambridge Rindge and Latin High School. Crowley was a successful but not a star student and was well liked by his teachers, coaches, and classmates. He is well respected by his African-American former coach at CRLS, George Greenidge. Coach Greenidge remembers Crowley’s remarkable success in wrestling and tenacity on the football ﬁeld. He speaks enthusiastically about Crowley and considers him one of the most disciplined athletes he has ever coached. Greenidge states that, to this day, he would swear by Crowley at a moment’s notice.

After graduating from high school, Crowley worked in several capacities as a police officer and ultimately followed in the path of his father and older brother by pursuing a career in law enforcement in Cambridge. As a result of his success as a police officer in Cambridge, Sgt. Crowley was able to move to Natick, a suburb of Boston, where he owns a comfortable, spacious home and resides with his young family.

Professor Gates rents a comfortable home owned by Harvard in a predominately White neighborhood where residents expect police to investigate any suspicious behavior, prevent as many criminal acts as possible, and maintain the safety of the neighborhood. Residents there have a very different sense of the police than residents of nearby Area IV. Area IV has a signiﬁcant African American and Latino presence. Parents there often feel that their children are harassed by the police and that young men are routinely confronted with the misconception that every Black male wearing baggy pants, tennis shoes, and some kind of a baseball cap ﬁts a proﬁle.

Living on Ware Street, fewer than two blocks away from Harvard University, it would seem clear that Professor Gates would be protected -- not targeted -- by law enforcement. The reality, however, turned out to be quite different. He would soon learn a lot about his own assumptions and understand ﬁrsthand the difference between the fundamental principle of the presumption of innocence and the practical application of the presumption of guilt.

July 16 was a bright summer day in Cambridge. Professor Gates was on his way home following a very successful business trip to China. Sgt. Crowley was halfway into his morning schedule, patrolling familiar territory near his old high school. Ms. Lucia Whalen, a circulation and fundraising manager for Harvard Magazine, was working at her desk at 7 Ware Street. The summer pace was a little slower because the next issue of the magazine would not be published until October.

Professor Gates was eager to get home after the grueling and long trip. He was not just exhausted but was also suffering from a nagging cold. Despite his exhaustion, Gates was happy to return home to begin editing the results of the genealogical research and interviews he had conducted in China for his Faces of America PBS series. He also knew that within days he would begin a relaxing summer at his home on Martha’s Vineyard in Oak Bluffs, a community where, for hundreds of years, many African American families have spent the summer.

Excerpted from The Presumption of Guilt by Charles Ogletree. Copyright 2010 by the author and reprinted by permission of Palgrave Macmillan, a division of Macmillan Publishers Limited. The Presumption of Guilt

The Arrest of Henry Louis Gates Jr. and Race, Class, and Crime in America