Accessibility links
South Africa's World Cup Court: Sudden Justice South Africa, which is often called one of the most dangerous countries in the world, was determined not to have crime disrupt the World Cup. The government promised that visitors would not encounter lawlessness -- and backed up that promise by installing special courts to handle cases during the soccer tournament. 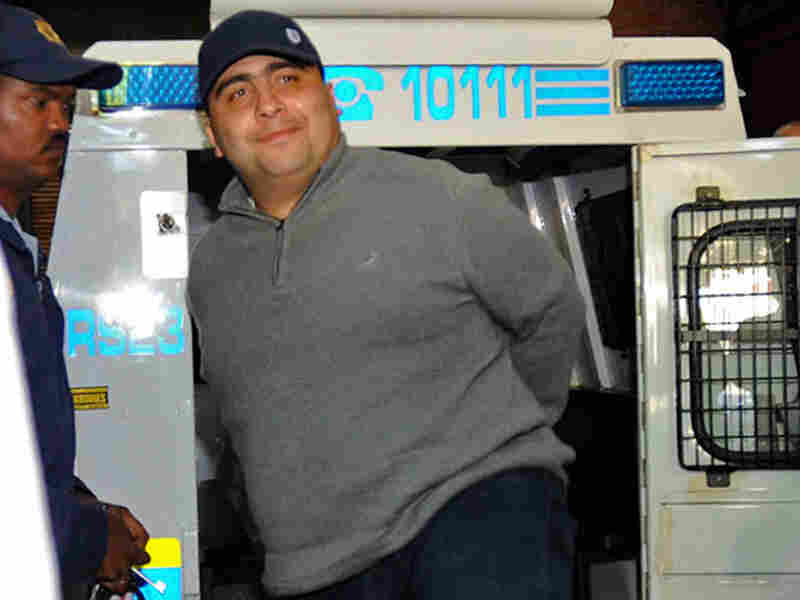 Soccer fan Pavlos Joseph is escorted by police after confronting England's players in the locker room after a 0-0 draw against Algeria. Joseph told the players the game was "a disgrace." AP hide caption 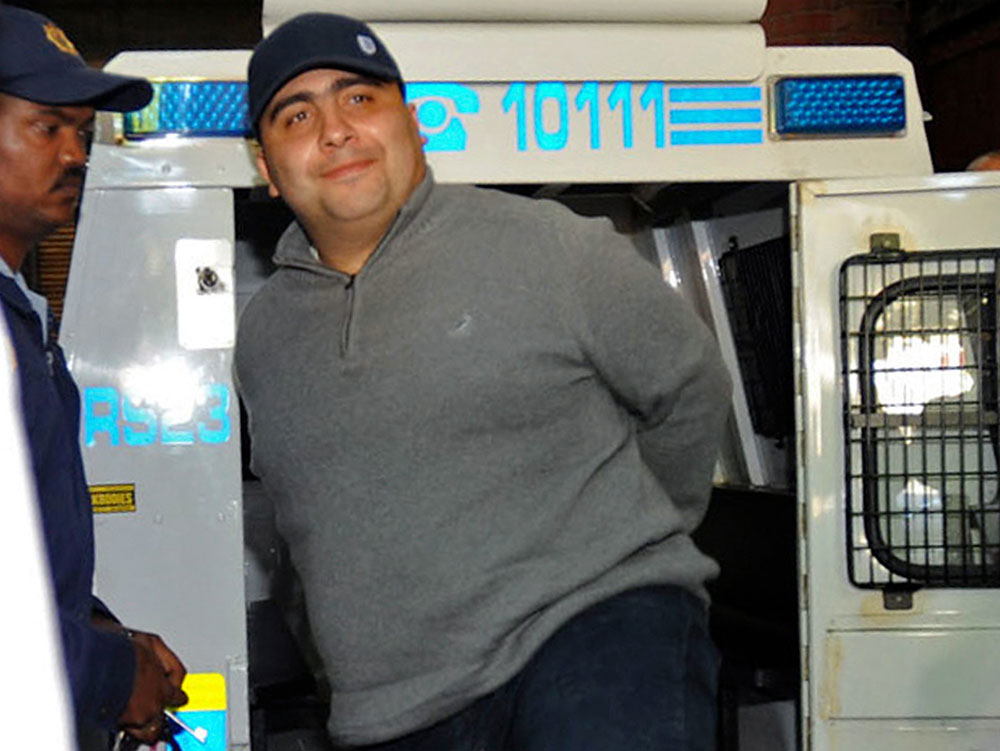 Soccer fan Pavlos Joseph is escorted by police after confronting England's players in the locker room after a 0-0 draw against Algeria. Joseph told the players the game was "a disgrace."

Elsewhere in the world, justice is blind. But in South Africa, Lady Justice is burdened. She carries her famous scales not in her hand, but on her head.

That's how she's depicted in the official logo of the National Prosecuting Authority of South Africa, a country beset by crime, infamous for its 50 murders a day, and notorious for burglaries and carjackings.

But South African officials were determined not to have crime disrupt the World Cup. They put out the word that visitors would not encounter lawlessness -- and they backed up that promise by installing 56 courts in the nine cities hosting World Cup games.

"So the minute anything happens -- a robbery, a theft, an assault, some disruptive behavior or someone entering the stadium illegally," says national prosecutor Billy Downer, "everyone is on hand to immediately deal with the situation."

In fact, Downer says, a case can be adjudicated almost in the time it takes to play a soccer match -- and sometimes on the same day the crime was committed.

Downer normally prosecutes murders and fraud cases. He was the main prosecutor in the corruption trial of Jacob Zuma, who's now South Africa's president. Downer says his lone shift at the World Cup court so far was uneventful.

In the last two weeks, the courts handled just a handful of cases, mostly in relative anonymity. But that was before England's team came to Cape Town, and a man by the name of Pavlos Jospeh announced his arrival: "I'm Pavlos, and I actually need the toilet."

That line comes from the website of a British tabloid, which paid Joseph for the story of his quest for a toilet after watching England tie Algeria. Pavlos found himself in the English team's locker room, where he gave David Beckham the what-for.

Now the World Cup court wants a word with him -- Joseph faces up to a year in jail.

Another high-profile case concerned a group of comely young women who showed up to a match dressed in identical orange outfits bearing the small logo of a beer company -- a brewer that was not an official World Cup sponsor.

This was against a trademark law on the books from 1941. It is also against FIFA rules, which in some cases have become the law of the land, says Downer.

For instance, the resale of match tickets is illegal in FIFA's regulations, which have been made law in terms of the host county's obligations.

Even defense lawyers like Steven Barker, who is representing the toilet-bound English fan, speak highly of the court. "It certainly speeds up justice," Barker says. "So it's a good idea, I think it's working well, and the state is working very hard to make it work."

On the day I was in the Cape Town World Cup court, an Algerian man charged with shoplifting argued that the process of purchasing was different in his country. Another man was accused of stealing FIFA laptops. His wife said that at the very least, she appreciated the speed of the World Cup court.

In the World Cup's opening week, three journalists were robbed at knife point; the next day their robbers were arrested. A day after that, they were in court; the robbers are now serving sentences of 15 years.

This type of justice is unheard of in South Africa. Discussing it with people who live here, the prevailing sentiment is to wonder why all the courts can't work so efficiently.

One reason is money. The government has allocated 45 million rand to the courts, or $6 million, demonstrating that even when justice is swift, it's not cheap.