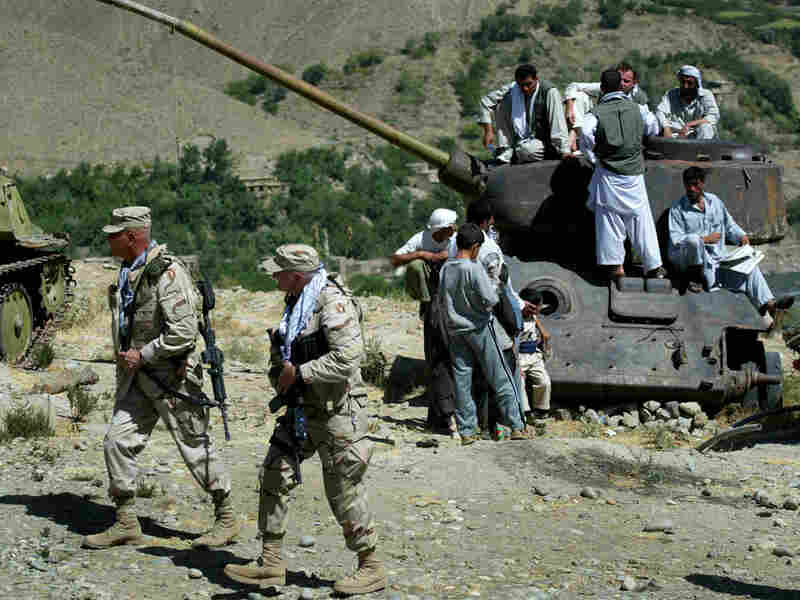 Two U.S. soldiers walk past a group of Afghan men resting on top of a destroyed tank in the Panjshir Valley of Afghanistan in September 2005. David Guttenfelder/AP hide caption 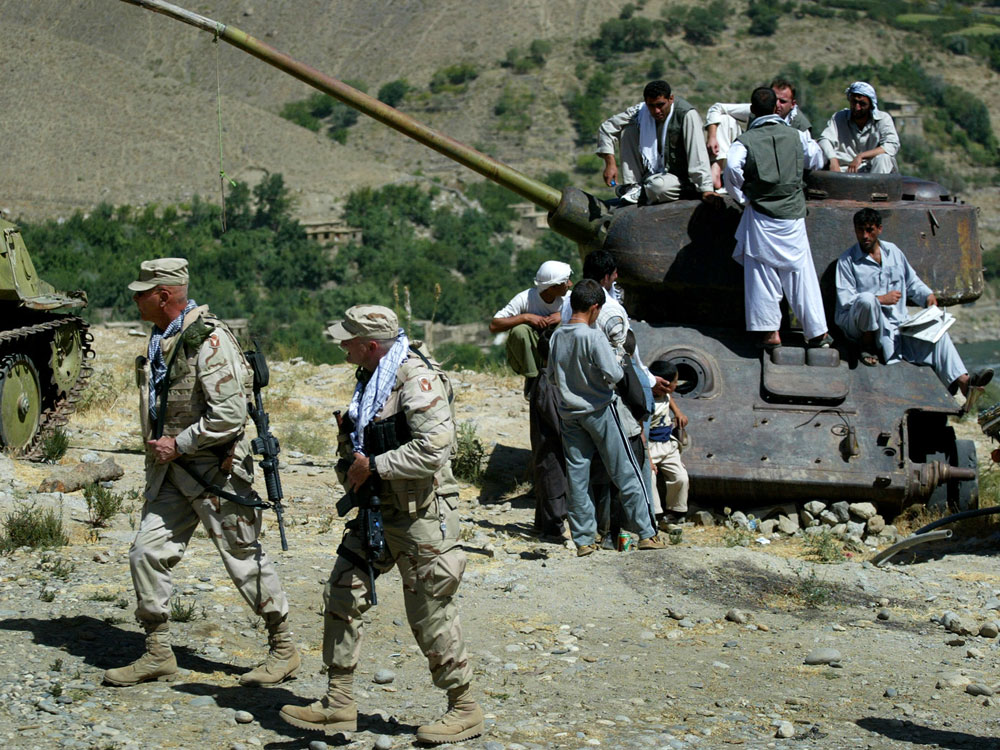 Two U.S. soldiers walk past a group of Afghan men resting on top of a destroyed tank in the Panjshir Valley of Afghanistan in September 2005.

In the push to get supplies into Afghanistan, the Pentagon is inadvertently lining the pockets of warlords and other unsavory characters. That's the thrust of a new report by congressional investigators, who urged the Defense Department to do a better job of oversight.

The 79-page report, titled "Warlord, Inc," tracks more than $2 billion in contracts covering trucking and security for most of the supplies that reach U.S. troops in Afghanistan.

The report acknowledges that getting cargo to its destinations in Afghanistan is tricky. Still, the chairman of a House subcommittee on national security, Massachusetts Democrat John Tierney, says the findings are shocking.

"There was really no oversight, certainly insufficient oversight over about $2.16 billion worth of contracts," Tierney says. "And the result of that is that the money may well be fueling a corruption situation where our strategy relies on a government to be reliable and corruption be taken out of the equation."

What happens, he says, is that the U.S. gives contracts to Afghan trucking companies and they then pay for their own protection. This situation has fueled what the report describes as a shadowy network of warlords, strongmen and corrupt Afghan officials. Tierney describes it as a protection racket that would make Tony Soprano proud.

"One estimate was that $1 to $2 million a week in some instances were going to security contracts to people that weren't vetted, or to warlords and other unsavory characters," Tierney says.

That is one of the concerns that has been raised by a number of analysts, which is, who are these people being hired by the Department of Defense to provide private security.

Paying Warlords Not To Attack

The report raises concerns that some money may go to pay off insurgents not to attack. But Tierney says his staff found no smoking gun. He chaired a committee hearing Tuesday during which a top Army logistics officer, Lt. Gen. William Phillips, described the importance of what's known as the host nation trucking contract.

Another Pentagon official says a new Defense Department task force is already trying to get a better handle on how U.S. taxpayer dollars are flowing through Afghanistan.

Moshe Schwartz of the Congressional Research Service says the Pentagon has improved the way it oversees contracts but still has a ways to go. He says that there are about 16,000 armed security contractors in Afghanistan, most of them Afghans, and that vetting them is key to U.S. strategy.

"That is one of the concerns that has been raised by a number of analysts, which is, who are these people being hired by the Department of Defense to provide private security? To the extent that the local population does not look kindly on those individuals, that could hurt our effort to win hearts and minds," Schwartz says.

Another analyst says the problem isn't just a contracting issue but the strategy the U.S. is pursuing. Frederick Starr, who runs the Central Asia-Caucasus Institute at Johns Hopkins University, says so far the U.S. is only worried about transporting military goods so the Afghans who want to help are only the ones the U.S. pays off.

"We don't have the local people interested in keeping the roads open. The minute we are the ones opening roads for their use as well as for our use, they become partners in the enterprise. And they will be the first to stand out with their Kalashnikovs when the Taliban tries to close their road," Starr says.

Starr says the U.S. military has shown some interest in a report he recently issued about ways to revive the ancient trade routes through Afghanistan. But today's hearing focused on the narrower question of getting supplies to the U.S. military without promoting corruption and undermining American strategy.