Accessibility links
NASA's Flying Telescope Sees Early Success NASA has built a powerful telescope into the body of a 747 airplane. The flying telescope recently completed its first flight, capturing images of a planet and a nearby galaxy. Flying at 40,000 feet, it captured images of space that telescopes on the ground can't. And, it has a longer working life than space-based telescopes. 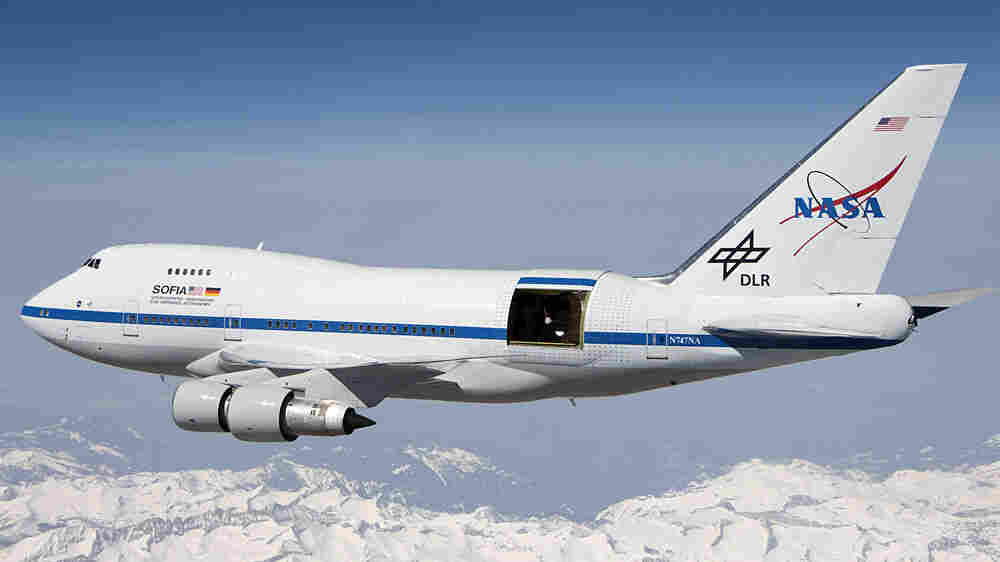 SOFIA made its first in-flight observations in May. Take a look at the pictures here. Courtesy of NASA hide caption 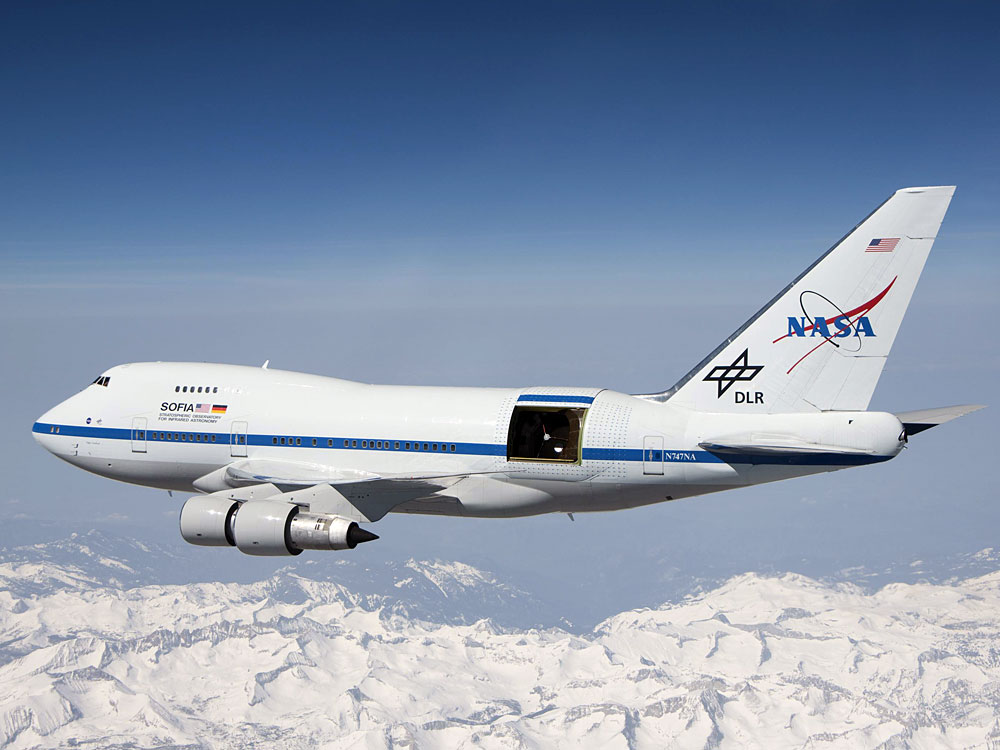 SOFIA made its first in-flight observations in May. Take a look at the pictures here.

NASA has begun operating a flying telescope powerful enough to record the birth of distant stars and planets. In late May it made its first scientific flight, capturing images of Jupiter and a nearby galaxy.

The telescope, which weighs 17 tons, is built into a 747 that serves as an airborne observatory. It's called the Stratospheric Observatory for Infrared Astronomy, or SOFIA, and it's a marvel of astronomy and aeronautics.

But just a few years ago, it looked like SOFIA would never get off the ground.

Most telescopes are fixed to the Earth. Some are in orbit, like the Hubble Space Telescope. The one on SOFIA operates somewhere in between -- at about 40,000 feet. NASA decided to put a telescope on a 747 more than 14 years ago, says Bob Meyer, who manages the program at NASA's Dryden Flight Research Center near Palmdale, Calif. 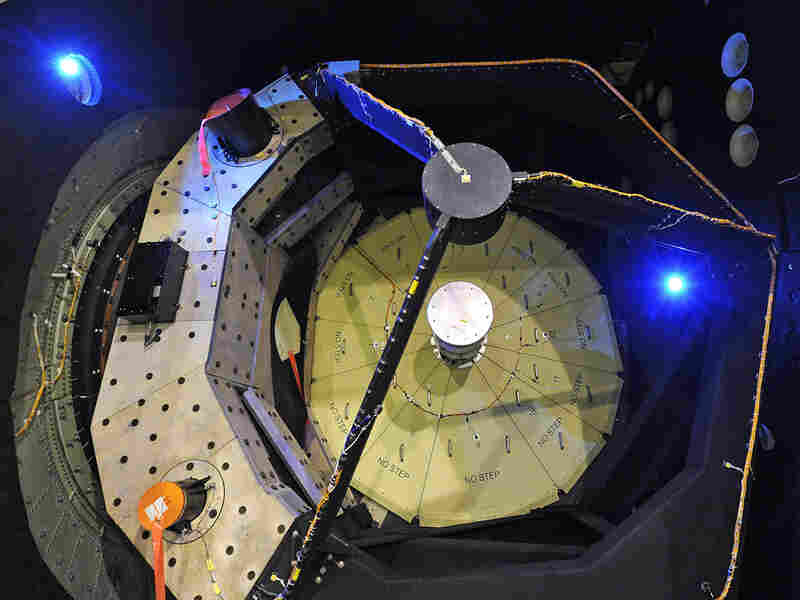 The SOFIA telescope captures infrared images that telescopes on the ground can't, and it has a longer working life than space-based telescopes. Robyn Beck/AFP via Getty Images hide caption 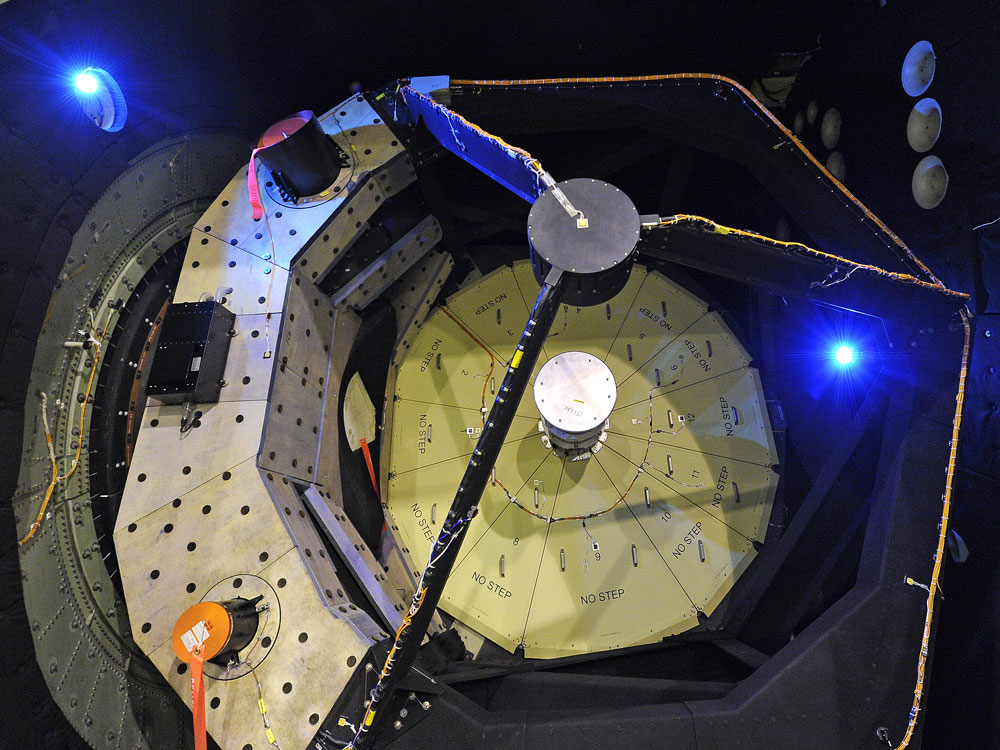 The SOFIA telescope captures infrared images that telescopes on the ground can't, and it has a longer working life than space-based telescopes.

"At the time, the 747 was the largest airplane flying," Meyer says. "The telescope was engineered to be as large as it could be and still fit inside a 747."

That turned out to be more than 8 feet across.

The 747 that houses SOFIA is more than 30 years old. It used to be part of the Pan Am fleet. NASA added a bulge near the tail to accommodate the telescope. Then it filled the interior with workstations for airborne scientists.

To the rear of those workstations is a massive blue bulkhead that separates the pressurized cabin from an unpressurized compartment holding the telescope.

When the plane reaches the stratosphere, a garage-size door in the fuselage retracts to give the telescope's mirrors direct access to the night sky. The observatory can fly like this for hours, which is critical to its mission.

"We're looking at light that was generated literally hundreds of millions of years ago," Meyer says. The light -- actually infrared radiation -- comes from such a great distance that the telescope may need to stay focused on a target for an hour or so to create a usable image, he says.

Early in SOFIA's history, people kept asking whether it was crazy to cut such a big hole in the side of a 747, Meyer says. "My response was, 'NASA takes what appears to other people to be crazy ideas and turns them into reality.'"

This idea almost didn't make it. In 2006, after a decade of delays and cost overruns, SOFIA still wasn't done.

"The telescope had been integrated (into the airplane), but we hadn't flown yet," says Eric Becklin, an emeritus astrophysicist at UCLA and the project's chief science adviser. "And then all of a sudden NASA said, 'We're going to cancel SOFIA.'"

U.S. scientists and the German Aerospace Center, which is a partner in the SOFIA project, successfully appealed the decision. But the reprieve meant there was huge pressure to finish the job quickly.

So it was a big deal a few weeks ago when SOFIA took off and aimed its telescope toward space for the first time.

Why SOFIA Is Special

The results were better than anyone had expected.

"We had images that are the sharpest images that have ever been seen of Jupiter and M82, which is a nearby galaxy where massive stars are forming," Becklin says.

So now SOFIA can finally begin addressing cosmic questions. One of those, Becklin says, is how stars like our sun form from scattered particles in space.

"Do they form just out all out by themselves and then an earth forms out there?" he asks. "Or do they form in clusters?" 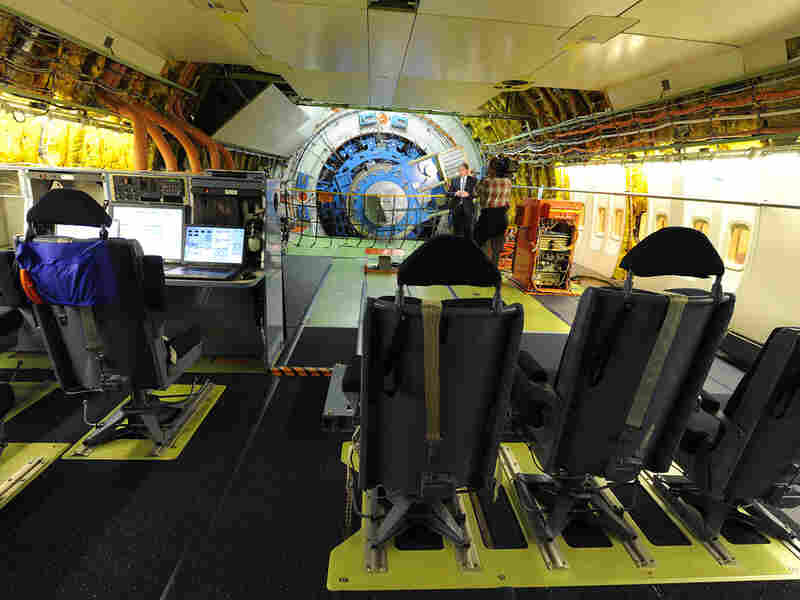 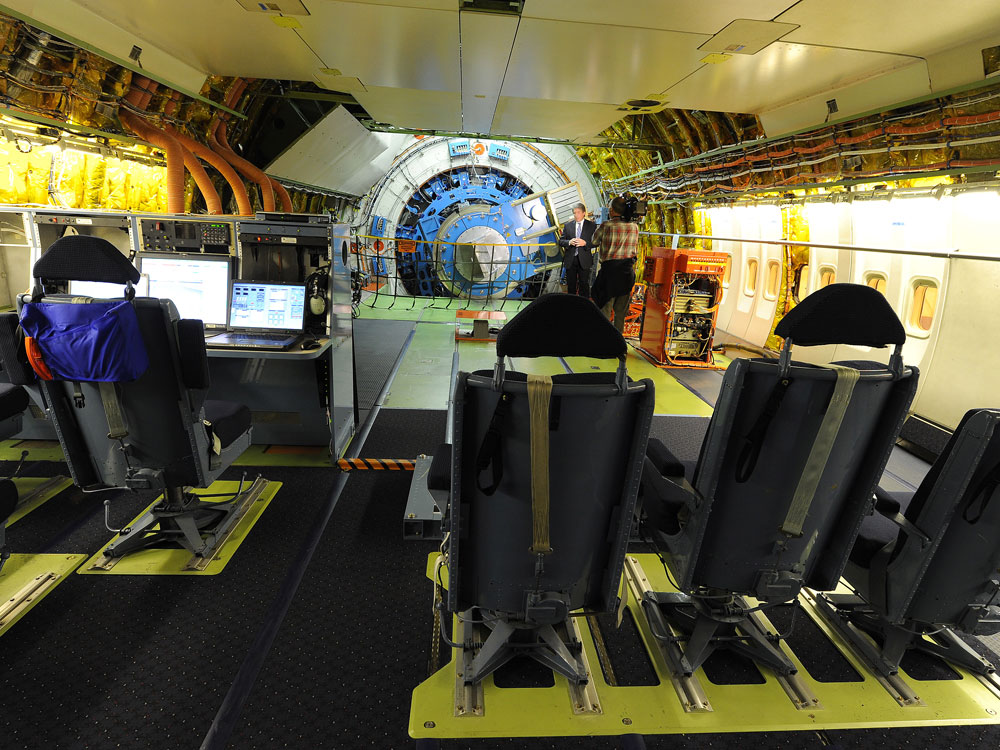 Scientists hope that SOFIA can answer those questions by looking at distant galaxies where stars and planets are just beginning to form.

SOFIA is ideal for this task because it uses an infrared telescope, which detects heat radiation rather than visible light. Infrared telescopes don't work very well on the ground because moisture in the atmosphere absorbs infrared radiation.

"We can actually fly up to a region where it really clears up," Becklin says. "That's why SOFIA is so special."

Of course, infrared telescopes in space are above all the moisture in the atmosphere. But these telescopes have short working lives because they must be cooled to just a few degrees above absolute zero. And satellites can only carry enough coolant to last a few years.

The other big disadvantage of space-based telescopes is that they can't be tweaked or fixed once they're in orbit. SOFIA is designed to fly for the next 20 years, and it can be modified after every flight. Also it's not limited to one spot on Earth or one orbit path in space.

One big question about SOFIA, though, has been whether a 747 with a big hole in it would be steady enough for cutting-edge astronomy.

Computer simulations and wind tunnel tests showed that air should flow smoothly across the large cavity in the jet, even at 500 mph. But scientists still worried that wind would buffet the exposed telescope, or that wind flowing across the opening would create an acoustic resonance, like when someone blows across the top of a soda bottle.

So there was a lot of curiosity about what would happen the first time the door was opened in flight, says Troy Asher, one of the research test pilots who flies SOFIA.

"There was a countdown: three, two, one, and open," Asher says. But he says the change was so subtle that even the pilot could barely feel it.