Accessibility links
Afghan Shift: McChrystal Out, Petraeus In President Obama accepted Gen. Stanley McChrystal's resignation as the top U.S. commander in Afghanistan on Wednesday and replaced him with Gen. David Petraeus (above right), head of U.S. Central Command. McChrystal was pushed out over his blistering remarks about administration officials quoted in a magazine interview. 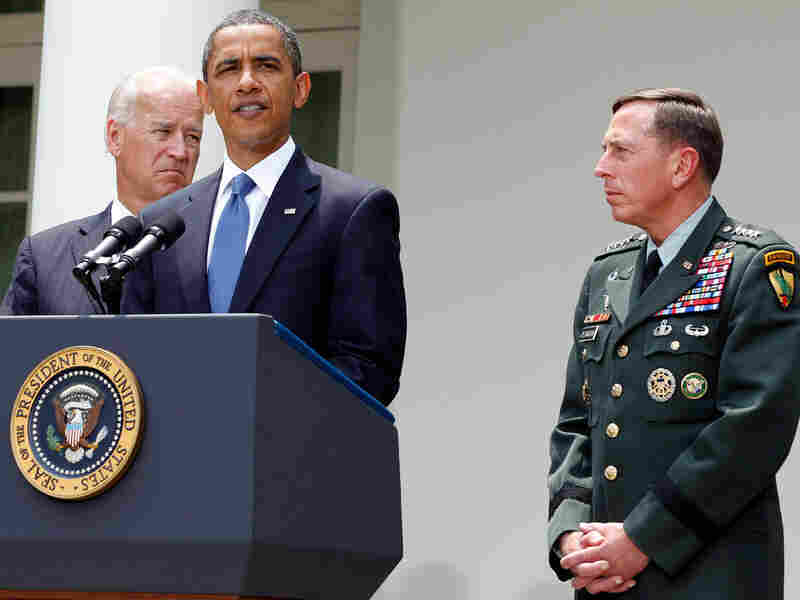 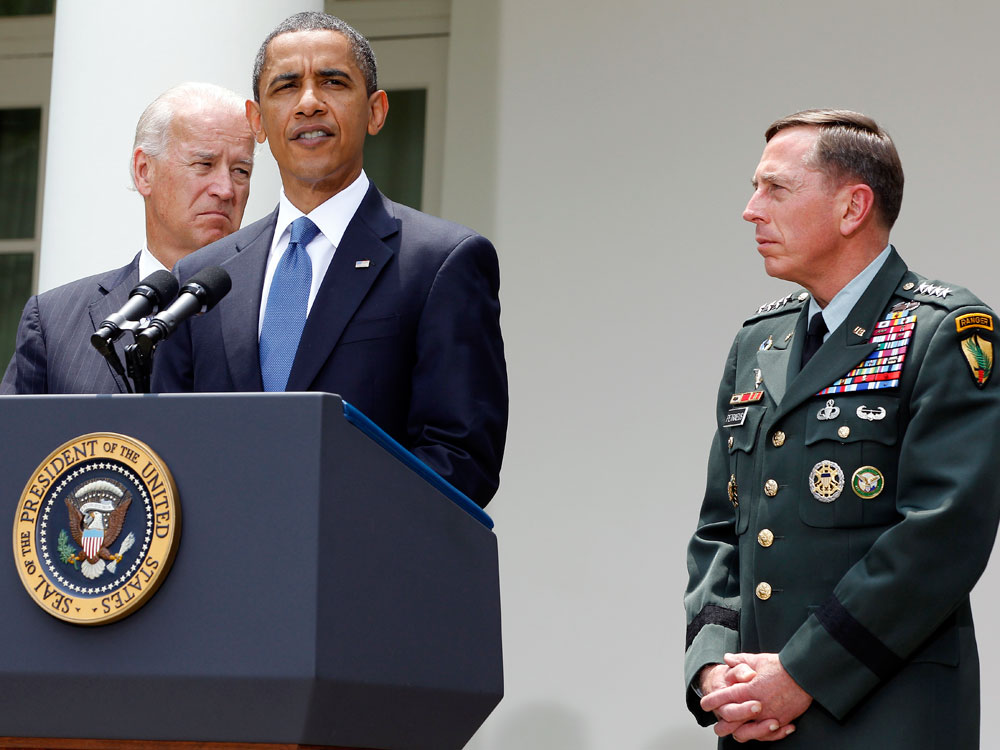 President Obama stands with Gen. David Petraeus (right) and Vice President Biden on Wednesday in the Rose Garden as he announces that Petraeus will replace Gen. Stanley McChrystal.

Gen. Stanley McChrystal was ousted Wednesday as the top U.S. commander in Afghanistan, following a face-to-face meeting with President Obama over remarks Chrystal and his staff made in a magazine article about administration officials and the war.

Petraeus, who may be the best-known general in America, served multiple tours in Iraq. He created the troop surge concept that many credit with bringing some measure of stability to Iraq -- where he was in command of U.S. forces in 2007.

McChrystal did not attend a war conference that followed his Oval Office meeting with Obama and later released a statement citing his "desire to see the mission succeed" as the reason for his resignation.

Listen To Obama's Speech At The White House

Speaking later from the Rose Garden, with Petraeus at his side, Obama said the time was right for a change in leadership in Afghanistan.

"The war is bigger than any one man or woman, whether a private, a general, or a president," Obama said. "As difficult as it is to lose Gen. McChrystal, I believe it is the right decision for our national security."

Obama said he did not make the decision to accept McChrystal's resignation over any disagreement in policy or "out of any sense of personal insult."

He added firmly that he will not tolerate division on his team. "This is a change in personnel, but it is not a change in policy," Obama emphasized, flanked by Vice President Biden, Defense Secretary Robert Gates and Adm. Mike Mullen, chairman of the Joint Chiefs of Staff.

"We think there is no one more qualified or more outstanding leader than Gen. Petraeus to achieve a successful conclusion of the Afghan conflict," said Sen. John McCain of Arizona, who spoke for himself as well as fellow Republican Sen. Lindsey Graham of South Carolina and independent Sen. Joe Lieberman of Connecticut.

Petraeus enjoys widespread support on Capitol Hill and has established relationships with leaders in Afghanistan and Pakistan.

Among Troops In Afghanistan, A Sense Of Surprise

NPR's Tom Bowman, who watched the president's remarks with U.S. troops in Afghanistan, said McChrystal's firing was not necessarily expected there.

"The sense was among soldiers that this was not a firing offense -- that McChrystal would likely get harshly criticized, taken to the woodshed in Washington and then returned to Kabul to run the war," Bowman told NPR's Michele Norris.

Bowman said that the appointment of Petraeus was also a surprise; troops had expected McChrystal's deputy, Lt. Gen. David Rodriguez, to take over.

McChrystal left the White House following his Oval Office call to accounts, and returned to his military quarters at Washington's Fort McNair.

Had he attended the previously planned Afghan strategy session in the White House Situation Room, he would have faced some of those colleagues that he and his aides had criticized in the magazine. Aides say Obama isn't bothered by honest debate, but he won't tolerate pettiness. He told his team members now is the time for them to come together.

Once the president says you've shown poor judgment, that is a classic case of lack of confidence, and that is a basic reason for release in the military.

"All of us have personal interests. All of us have opinions. Our politics often fuels conflict," Obama said. "But we have to renew our sense of purpose and meet our responsibilities to one another and to our troops who are in harm's way and to our country."

A senior military official said there is no immediate decision about whether he would retire from the Army, which has been his entire career. The official spoke on condition of anonymity because he was not authorized to speak publicly.

Obama had summoned McChrystal to Washington from Afghanistan after learning of the comments by the general and his inner circle about administration officials, including the president. The White House rebuke of McChrystal on Tuesday suggested that it would have been hard for him to give an explanation that would have been enough to save his job.

Before Petraeus can assume his new command, he has to be confirmed by the Senate. McCain suggested it might be the fastest confirmation hearing in history.

Petraeus: A 'Partner' In Afghanistan

Petraeus is currently the head of U.S. Central Command and McChrystal's direct superior. 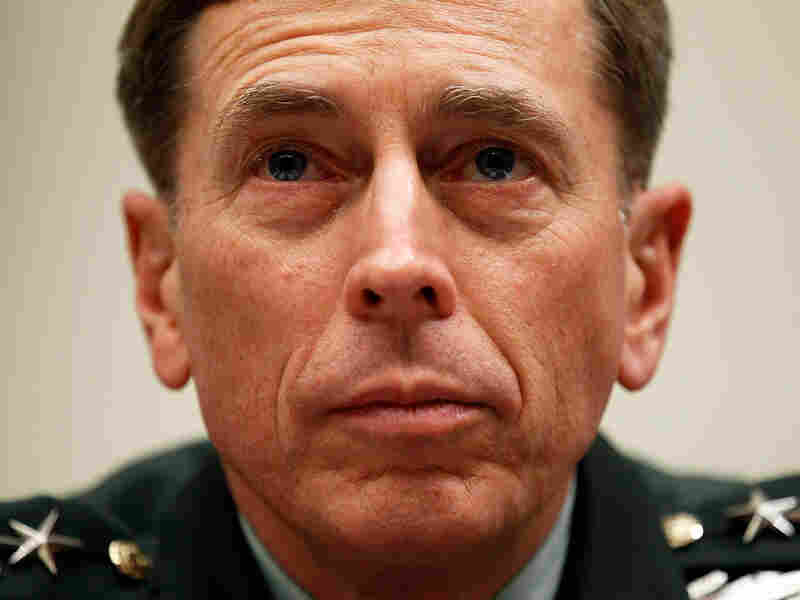 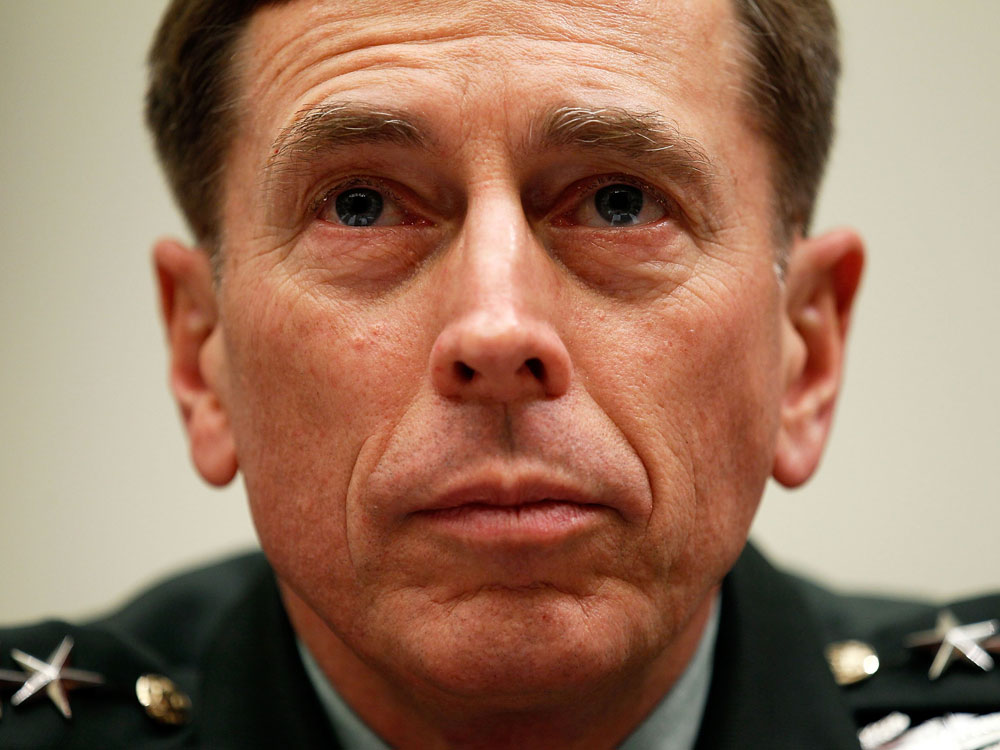 Recent experience: Took over as head of U.S. Central Command in October 2008 after serving 19 months as the top American commander in Iraq during the troop "surge" to combat the insurgency there. Led the 101st Airborne Division during the 2003 invasion of Iraq and capture of Baghdad.

The appeal to Petraeus to return to the front lines will help give continuity to the war effort in Afghanistan, which has foundered recently as the Taliban has grown in strength and numbers.

And putting him in charge of the war has another benefit, says Anthony Cordesman of the Center for Strategic and International Studies.

"It shows the Afghans the United States does not intend to leave -- that it is going to be a partner," Cordesman said.

The 57-year-old Petraeus has a good reputation among members of the Obama administration. He's considered the architect of the 2007 surge in Iraq and is credited with harnessing sectarian bloodshed there.

Petraeus is widely credited with creating the counterinsurgency strategy that both McChrystal and Obama say will win the war.

NATO officials said that despite the military shakeup, they will continue to support that strategy.

McChrystal had run the war in Afghanistan for a year, bolstered by tens of thousands of additional U.S. troops.

But it's a critical time in the war. An effort to retake Kandahar City from the Taliban has stalled and more of the U.S.'s NATO allies have said they will withdraw at the end of next year. Meanwhile, the death toll for American soldiers and Marines is growing.

The author of the Rolling Stone article, "The Runaway General," on Tuesday night told NPR's All Things Considered that he was surprised that his story had raised such a ruckus. Journalist Michael Hastings said he remembered being shocked by the general's candor and outspokenness during the interviews, but he did not anticipate the hullabaloo the article has caused.

Hastings said that, while he could only speculate about what motivated McChrystal and his aides to say what they did, he guessed that they might have wanted "to throw a hand grenade into the pond and create some shockwaves," to get more people to pay attention to the war in Afghanistan.

Timeline: Afghanistan And The U.S. 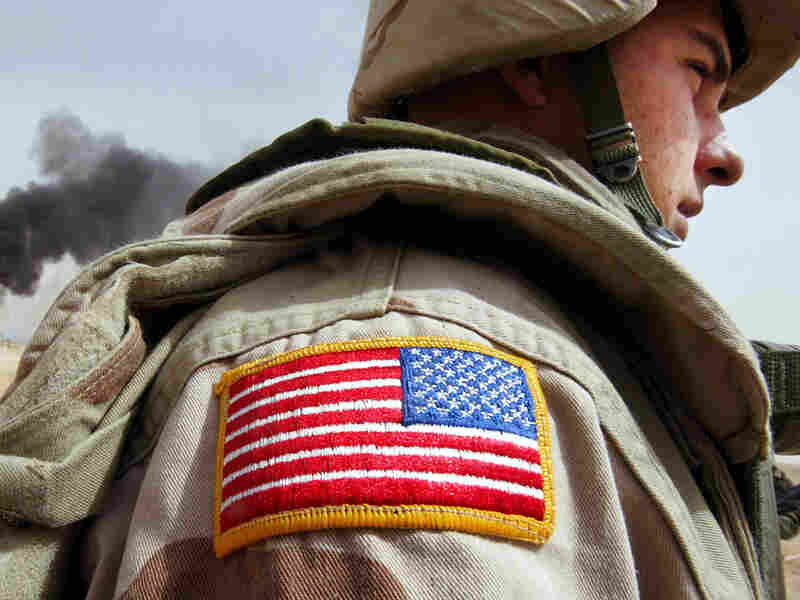 "Perhaps they just created bigger shockwaves than they're accustomed to," Hastings said.

McChrystal didn't criticize Obama himself in the magazine article but called the period last fall when the president was deciding whether to approve more troops "painful" and said Obama appeared ready to hand him an "unsellable" position.

McChrystal also said he was "betrayed" by Ambassador Karl Eikenberry, the man the White House chose to be his diplomatic partner in Afghanistan. He accused Eikenberry of raising doubts about Karzai only to give himself cover in case the U.S. effort failed. "Now, if we fail, they can say 'I told you so,' " McChrystal told the magazine. And he was quoted mocking Biden.

If not insubordination, the remarks -- as well as even sharper commentary about Obama and his White House from several in McChrystal's inner circle -- were at least an indirect and extraordinary challenge and one that consumed Washington. The capital hasn't seen a similar public contretemps between a president and a top wartime commander since Harry Truman stripped Gen. Douglas MacArthur of his command more than a half-century ago after disagreements over Korean War strategy.

It was an important moment for the president, who otherwise ran the risk of looking like he couldn't command his generals. Obama took a moment to praise McChrystal for his service and his intelligence, but he said in airing his grievances with Rolling Stone, McChrystal had broken the strict code of conduct required of everyone in uniform.

Notably, neither McChrystal nor his team questioned the accuracy of the story or the quotes in it. McChrystal issued an apology.

"The comments are certainly egregious," said Nathaniel Fick, of the Center for a New American Security, on Wednesday's Morning Edition. "They're reprehensible and unforgivable. But I'd make the point that if you caught some NSC staffers or people on the vice president's staff sitting around on a Saturday night with a bottle of scotch, you'd hear a lot of the same things, but the guns would be pointed in a different direction."

Still, military leaders rarely challenge their commanders in chief publicly. When they do, consequences tend to be more severe than a scolding.

"Once the president says you've shown poor judgment, that is a classic case of lack of confidence, and that is a basic reason for release in the military," said Tom Ricks, also of the Center for a New American Security. "When you lose confidence in a subordinate, you're obliged to relieve them -- if only as a matter of obligation to the troops underneath that person."

McChrystal was viewed as a visionary with the guts and smarts to turn around the beleaguered Afghanistan war when he was chosen to take over last year. But despite his military achievements, he has a history of making waves.

This is not his first brush with Obama's anger. Last fall, the president scolded McChrystal for speaking too bluntly about his desire for more troops.

Ricks noted on Morning Edition that leaving McChrystal in place would send "a very poor message to the troops about discipline and judgment."

"The troops have a term -- 'different spanks for different ranks' -- in which they suspect that generals get away with stuff that corporals don't get away with," Ricks said. "And the message here that Obama needs to send is, 'No, the entire military is subordinate to me and must show good judgment and discipline."