Accessibility links
National Review: Problems With Public-Sector Unions The National Review editors argue forcing unionization on local-government work forces would be a financial disaster, and a political one, too. 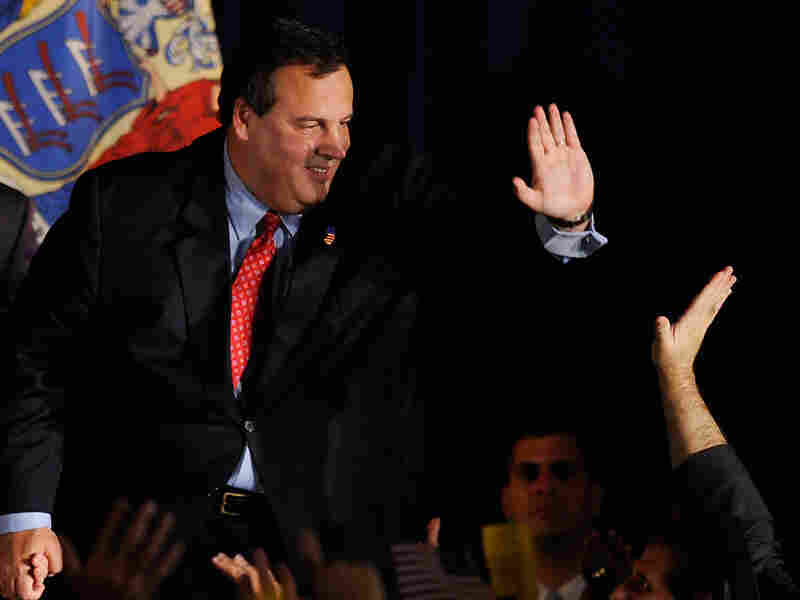 Gov. Chris Christie of New Jersey, is battening down his political hatches for the hurricane of union abuse headed his way in response to his sober efforts to get his state's finances in order. Stephen Chernin/Getty Images hide caption 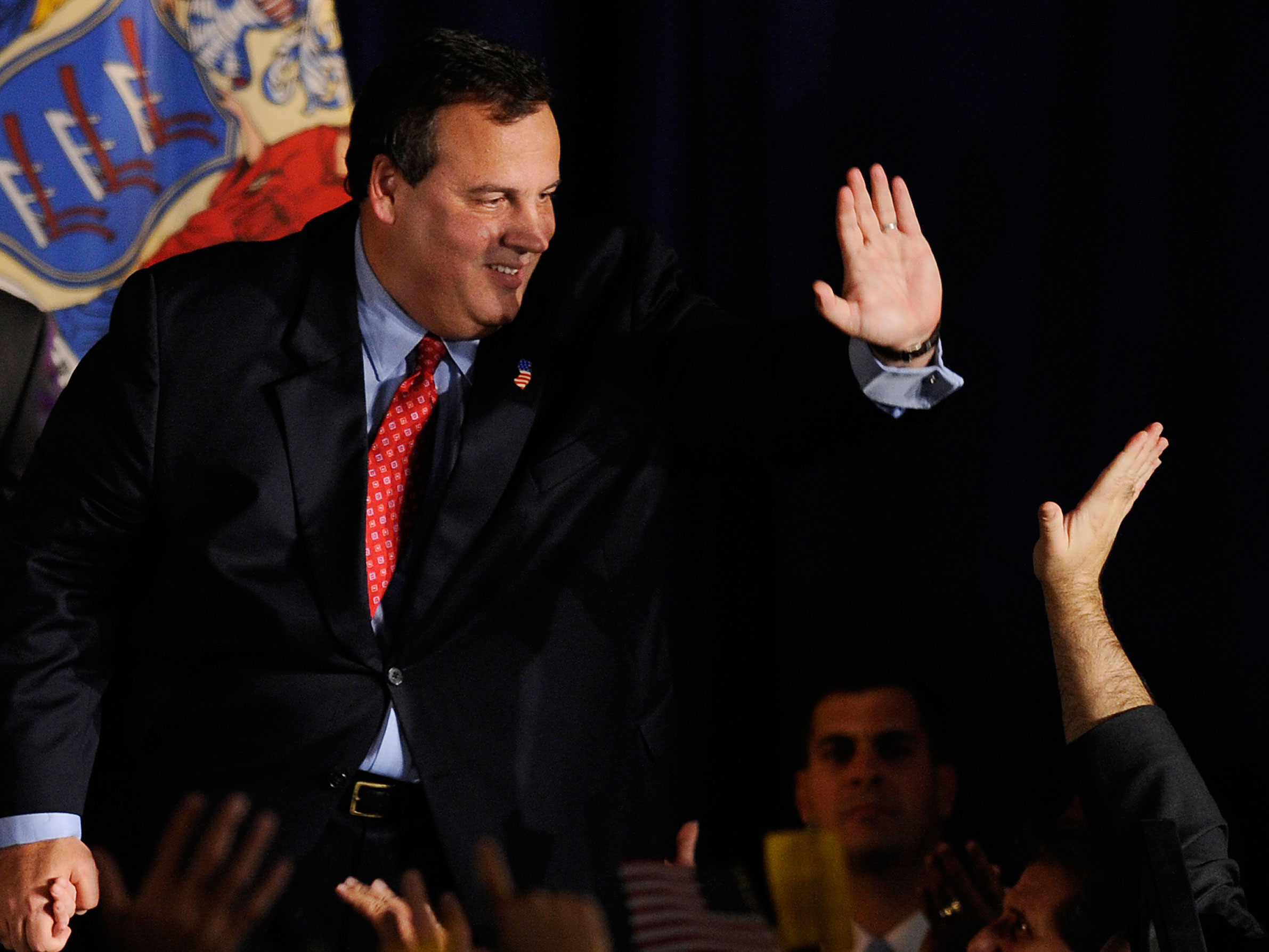 Gov. Chris Christie of New Jersey, is battening down his political hatches for the hurricane of union abuse headed his way in response to his sober efforts to get his state's finances in order.

Government employees' unions already maintain a death grip on the finances of most state and local governments, and a remarkably bad piece of legislation -- the Public Safety Employer-Employee Cooperation Act -- threatens to tighten that stranglehold, imposing the unionization of public-safety workers in the 21 states that currently do not extend that privilege. We are not surprised that most Democrats are supporting the bill, which empowers and enriches one of their most important constituencies; we are surprised and disheartened that some Republicans are backing it.

For another point of view on public-sector unions read why Amy Traub of The Nation believes the myth of the overpaid public employee is being used to undermine a range of progressive priorities.

This bill is bad policy and bad politics. It is bad policy because government employees are overpaid and overpensioned, and wider unionization will make that worse. State and local governments already heave under the burden of their swollen payrolls, while the time-bomb of unfunded government-worker pension liabilities is set to blow a multitrillion-dollar hole in state and local budgets within a few years.

Some states and municipalities are in deep crisis already, while others have managed their affairs with relative aplomb. In most cases, those jurisdictions that have come through the recent recession without descent into utter crisis have been those that enjoy the flexibility and ability to innovate that comes from having a fluid work force -- which is to say, a work force that is not subject to the rigidities imposed by public-sector unions. The size of paychecks is not the only concern, or even the principal one, when it comes to the unionization of government work forces: Inflexible work rules, the politicization of the work place, and the protection of low-performing workers are equal problems, if not greater.

To take one obvious example, the Washington Post points to the vast difference between Montgomery County, Maryland, and Fairfax County, Virginia, two nearly identical neighboring communities with one important difference: Government unions have far less legal power in Virginia than they do in Maryland. "The region's two largest jurisdictions -- demographic cousins with populations around 1 million, school systems among the nation's biggest and best, and public spending equal to that of small countries -- have parted ways," the Post reports. "To put it bluntly, Montgomery is lurching under the weight of irresponsible governance, unsustainable commitments and political spinelessness -- particularly in the face of politically powerful public employees unions." Pay for teachers in Montgomery County, for instance, nearly doubled between 2000 and 2010, and remains about 20 percent higher than in nearby Fairfax. With about 80 percent of all county expenses related to personnel costs, Montgomery County's unionized work force left it with little room to maneuver, necessitating deep cuts in public services; serious as those cuts were, they have not been sufficient to balance the books, and the county faces hundreds of millions of dollars in projected deficits.

The problems imposed by unionized government are well understood, which is why 21 states either decline to require collective bargaining with public-sector unions or prohibit the practice outright. If anything, Republicans should be working to extend that model of government to the rest of the states, through the extension of right-to-work laws, rather than trying to impose the New Jersey model (read: the bankruptcy model) on the better-governed states. Consider the case of Hawaii, where coordinated strikes by public-school teachers and college professors in 2001 resulted in massive pay increases for educators who already were among the nation's highest paid. It was a display of raw power on the part of the unions: Education was shut down, semester schedules were disrupted, students going to on-campus jobs were harassed with impunity by union thugs. So successful was the strategy that the professors authorized another strike just a few years later. It is impossible to imagine such a scene playing out in Texas or South Carolina, where the laws do not empower public-sector unions to commit legalized extortion.

In education, the public-sector unions have effected a dramatic transformation: Teachers' real per-hour compensation, including the value of pensions and other benefits, far outpaces that of similarly qualified workers in the private sector, and that high baseline contributes to the unseemly swelling of non-union administrators' compensation as well, producing multimillion-dollar contracts for small-town public-school superintendents. (If anybody could explain to us why the school administrator in Rye, N.Y., should be paid $340,000 a year, we'd be grateful.)

The Public Safety Employer-Employee Cooperation Act proposes to effect a similar transformation among police officers, firefighters, and other public-safety workers. Like teachers, the men and women who do this dangerous work are sympathetic and sometimes heroic figures -- which is precisely why the rapacious union bosses choose to hide behind them. Lacking the evolutionary finesse that keeps most parasites from killing their host organisms, the American labor movement has driven the private firms that once employed its members offshore or into bankruptcy. Consequently, the only growth market remaining for the union movement is government: More union members today are employed by government than by the private sector. The union bosses, being neither blind nor stupid, see the advantages of sitting on both sides of the negotiating table, and their influence on politics has been predictably baleful. Unfortunately for those who would curtail their influence, they enjoy a steady stream of cash, expropriated from the paychecks of their members, and a ready supply of foot soldiers available for get-out-the-vote and rent-a-mob duties.

That's a problem for conservatives. One of the more dynamic Republican leaders in the country, Gov. Chris Christie of New Jersey, is battening down his political hatches for the hurricane of union abuse headed his way in response to his sober efforts to get his state's finances in order. It is going to be ugly, with the unions employing the same tactics they used to derail the governorship of Arnold Schwarzenegger. So why in the name of Barry Goldwater would a single Republican, much less a half-dozen senators, support extending the influence of the people who made New Jersey New Jersey? The Senate Republicans supporting the bill include not only the usual practitioners of Me-Tooism -- the Maine ladies, Lisa Murkowski -- but also Scott Brown of Massachusetts and New Hampshire's Judd Gregg. (What, no Lindsey Graham?) It would be cheaper and better for the country if these Republicans would just go ahead and make a direct donation to the Democratic National Committee, an act to which supporting this bill is equivalent. If Sen. Mike Johanns really wants to turn Lincoln, Neb., into Trenton on the Prairie, let him confine his efforts to his own state and leave the other 49 to go their own way.