Accessibility links
Up For Grabs: $10M For Groups Reaching Kids The Obama administration is offering $10 million in grants to 20 organizations to replicate the Harlem Children's Zone program in New York, a center for low-income kids. The response has been tremendous: Nearly 1,000 organizations said they will apply for the Promise Neighborhoods money.

First in a two-part report 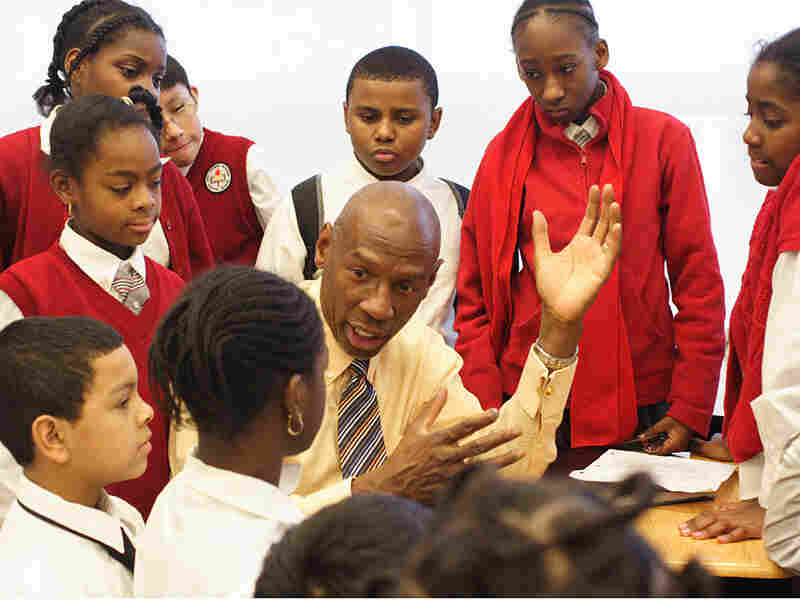 Harlem Children's Zone CEO and founder Geoffrey Canada (center) has become a media darling, with books and documentaries extolling his charismatic leadership and his prodigious fundraising abilities. Now, grants from the Obama administration aim to replicate the program across the country. Marty Lipp hide caption 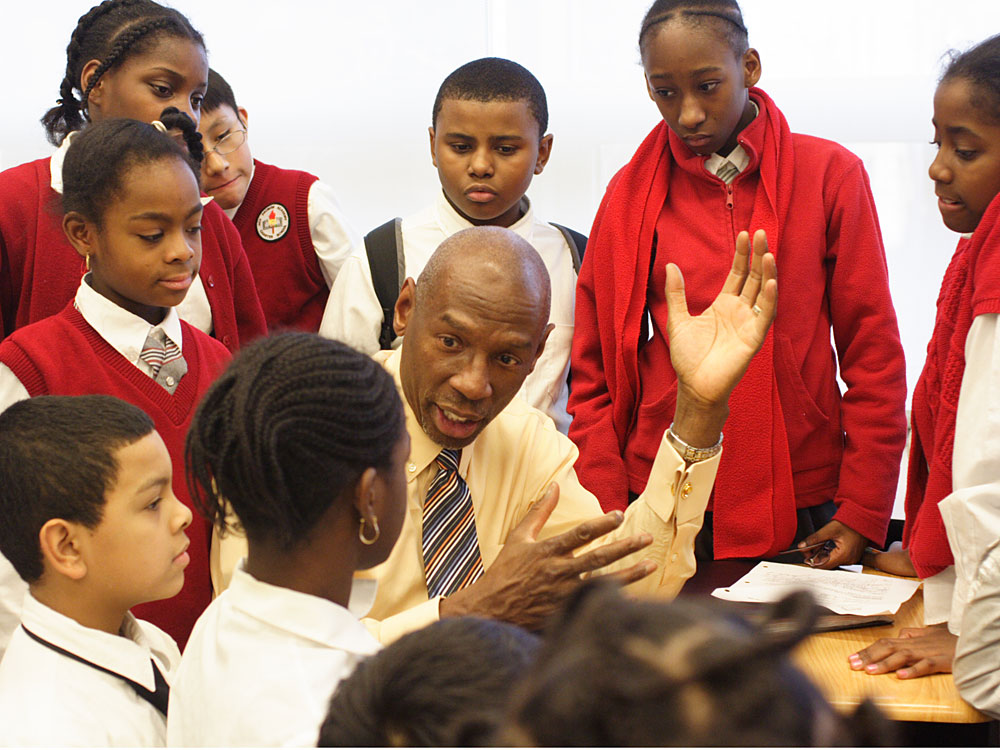 Harlem Children's Zone CEO and founder Geoffrey Canada (center) has become a media darling, with books and documentaries extolling his charismatic leadership and his prodigious fundraising abilities. Now, grants from the Obama administration aim to replicate the program across the country.

Just before he was elected president, Barack Obama made a speech laying out how he would revive the fight against poverty.

He promised to focus on programs like the renowned Harlem Children's Zone in New York. He called it "an all-encompassing, all-hands-on-deck, anti-poverty effort that is literally saving a generation of children."

Now, Obama wants to replicate the Harlem Children's Zone -- a community organization that gives low-income kids equal access to education -- and he's offering a total of $10 million to communities willing to try. The response has been tremendous: Nearly 1,000 organizations say they will compete for the "Promise Neighborhoods" money. The deadline is Monday.

The Harlem Children's Zone covers 97 square blocks of Harlem -- a neighborhood legendary for great black culture and deep poverty. Its goal is to wrap kids in a bundle of services to soften the daily blows of this harsh environment.

Pt. 2 Of This Report

The GEMS Head Start center on 117th Street in Harlem looks like many day care centers. Three- and 4-year-olds play in a brightly colored glass room and work on their ABCs.

Like Head Start centers around the country, this school is open to all low-income families. But Director Deborah Carroll says the resources available here are not typical.

Carroll uses those extra resources to get kids ready for kindergarten by helping them overcome the gap that puts poor kids behind the eight ball. Visitors who doubt whether this is working are quickly corrected.

Ask Carroll if she's trying to erase the "achievement gap," and she says, "We are doing that." That rock-solid confidence is part of the air these kids breathe from the day they enter the zone to the day they leave.

Creating A Net Of Support

That same spirit continues at Promise Academy II, a charter school that will be the next step for many of those preschoolers.

Principal Kathleen Fernald has been teaching for nearly 40 years across the country, and she says she's never before had access to such an array of services.

"For instance, if a child misses a lot of school and has an attendance issue due to asthma, we connect the family to the Harlem Children's Zone asthma initiative," she says. "They then get a case manager who goes to the families, they bring a HEPA vacuum cleaner, they help educate the families on keeping a dust-free home."

'This Is Difficult Work'

These efforts have achieved some impressive results -- higher test scores, more kids getting into college. That's why the Obama administration wants to sow these seeds across the country with the Promise Neighborhoods initiative.

Jim Shelton of the Department of Education says the effort looks beyond the schools for ways to boost achievement.

"Promise Neighborhoods recognizes the importance of a high-quality school at the center, but allows community-based organizations to actually drive the sets of relationships first, that actually can pull it all together," he says.

The Long Road To 'Promise'

Community organizers across the country are sweating over their computer terminals, struggling to fill out the complicated 64-page grant application.

Though the administration only plans to fund 20 "promise neighborhoods," 943 organizations across the country have said they want to apply, from the Cherokee Nation to Catholic Charities of Middlesex County, N.J.

Before they hit the send button, Children's Zone CEO and founder Geoffrey Canada offers words of caution: "This is very, very difficult work."

Canada has become a media darling, with books and documentaries extolling his charismatic leadership and his prodigious fundraising abilities. For those jumping into this game for the first time, Canada says, it's harder than it looks.

"We need the first group of these to be successful," he says. "We don't think this is really a place for folk who are just really trying to understand or beginning this approach. We think this is an opportunity for really seasoned professionals."

The question now is whether Canada's recipe will work in other parts of the country, or whether the attempt to duplicate the Zone might just be too much of a stretch for some groups. In the past, organizations have started promising programs, only to find they fell apart when they expanded too fast.

Part 2 of this report on All Things Considered will explore whether the Harlem Children's Zone model can address the challenges facing poor, rural countries.