Accessibility links
Not So Neighborly Associations Foreclosing On Homes Capt. Mike Clauer was serving in Iraq when he discovered that his home, which was completely paid for, had been foreclosed on for a couple of missed homeowners association payments. His $300,000 home was sold on the courthouse steps for $3,500. 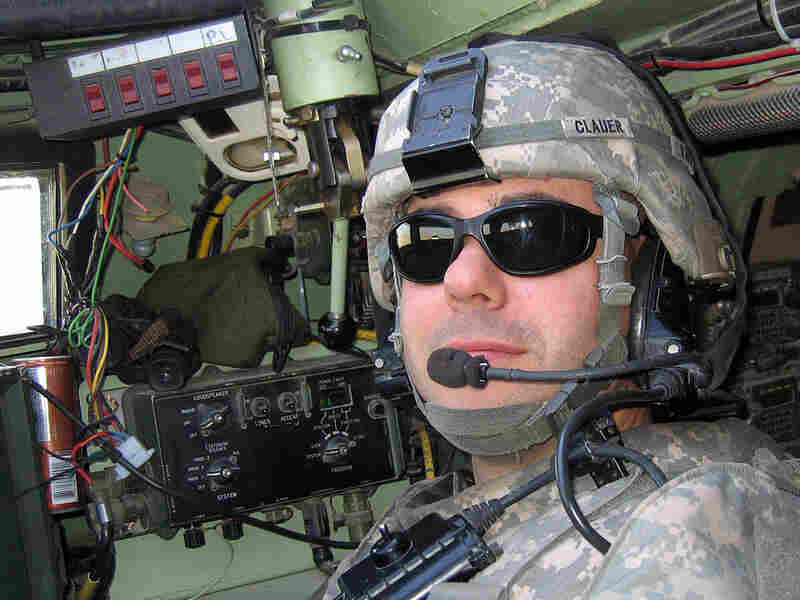 Capt. Mike Clauer was serving in Iraq when he learned that his home was sold because of missed HOA dues. In many states, it is relatively easy for HOAs to foreclose on members' homes for missed payments as little as a few hundred dollars. Courtesy of Mike Clauer hide caption 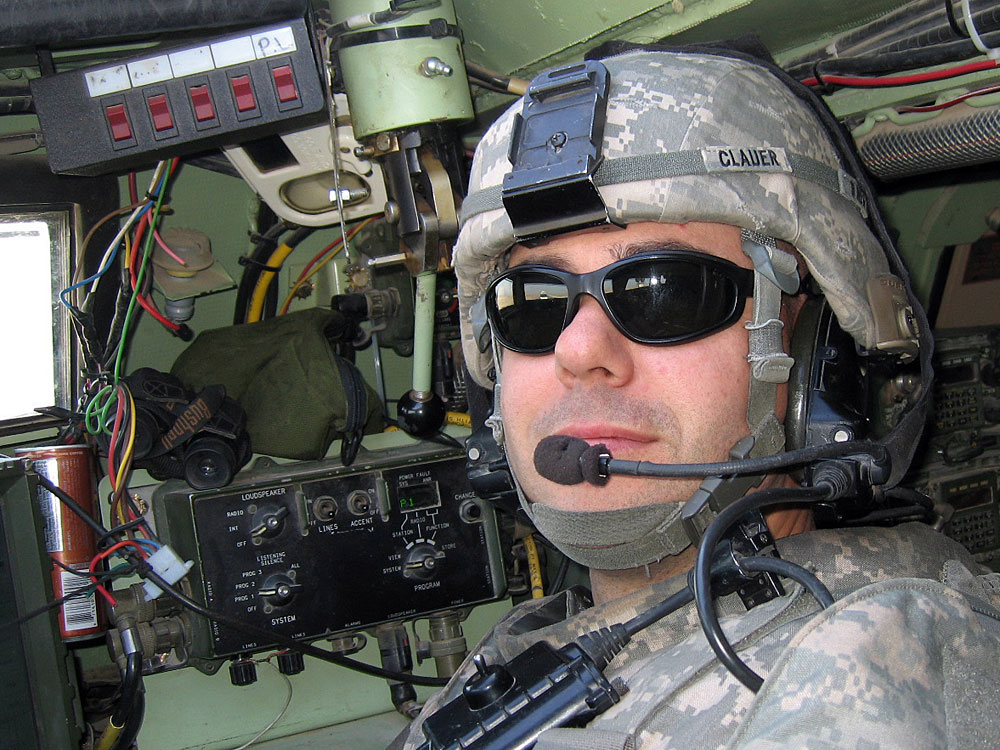 Capt. Mike Clauer was serving in Iraq when he learned that his home was sold because of missed HOA dues. In many states, it is relatively easy for HOAs to foreclose on members' homes for missed payments as little as a few hundred dollars.

Capt. Mike Clauer was serving in Iraq last year as company commander of an Army National Guard unit assigned to escort convoys. It was exceedingly dangerous work -- explosive devices buried in the road were a constant threat to the lives of Clauer and his men.

He was halfway through his deployment when he got a bolt from the blue -- a frantic phone call from his wife, May, back in Texas.

"She was bawling on the phone and was telling me that the HOA [homeowners association] had foreclosed on our house, and it was sold," he says. "And I couldn't believe that could even happen."

Clauer had a hard time understanding what his wife was saying. His $300,000 house was already completely paid for. Could it be possible that their home was foreclosed on and sold because his wife had missed two payments of their HOA dues?

In many states it is not difficult for an HOA to foreclose on a member's home for past dues even if the amount owed is just a few hundred dollars.

"I was really in a hurry trying to get home before my family was living on the streets," Clauer says.

Sold For A Steal

But by the time he got back to Texas, it was too late. The Clauers' four-bedroom, 3,500-square-foot home had been sold on the courthouse steps for just $3,500 -- enough to cover outstanding HOA dues and legal costs.

"Basically it's everything to us," Clauer says. "Having a house like this paid for was huge for us, for our retirement plans. We thought we were so far ahead, and now it's like we're starting from the beginning." 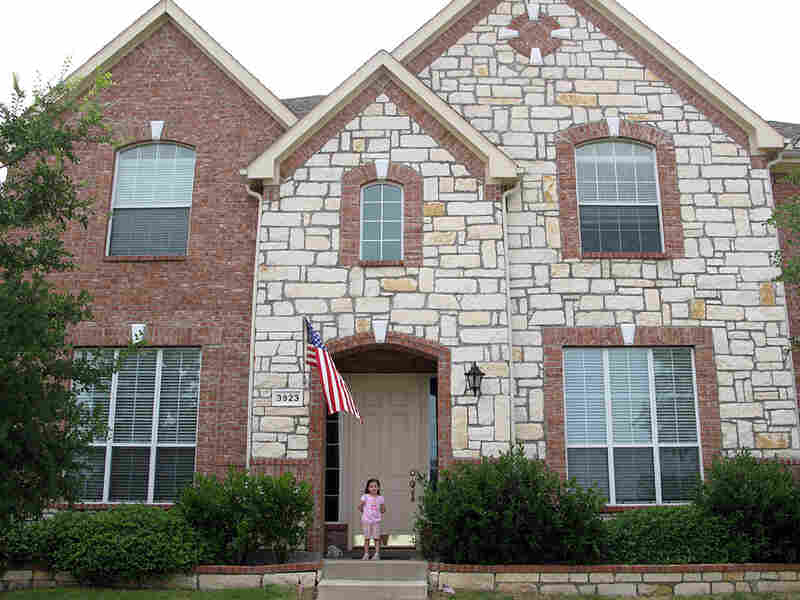 Clauer's $300,000 home was completely paid for when his HOA foreclosed on it because his wife had missed two association payments. The 3,500-square-foot home was sold for $3,500 on the courthouse steps. Courtesy of Mike Clauer hide caption

Clauer's $300,000 home was completely paid for when his HOA foreclosed on it because his wife had missed two association payments. The 3,500-square-foot home was sold for $3,500 on the courthouse steps.

Lawyers for the HOA say that while Clauer's case is regrettable, it was his and his wife's fault for not paying their dues in a timely manner.

And in 33 states, an HOA does not need to go before a judge to collect on the liens.

It's called nonjudicial foreclosure, and in practice it means a house can be sold on the courthouse steps with no judge or arbitrator involved. In Texas the process period is a mere 27 days -- the shortest of any state.

David Kahne, a Houston lawyer who advises homeowners, says that in Texas, the law is so weighted in favor of HOAs, he advises people that instead of hiring him, they should call their association and beg for mercy.

"I suggest you call the association and cry," he says.

If a homeowner misses a couple of association dues payments, the $250 or $500 they owe often becomes $3,000 after the association's lawyers add their legal fees, Kahne says.

It's not the HOA that has to pay the lawyer's bill but the delinquent homeowner. If the homeowner wishes to contest and loses, the owner is on the hook for legal fees that could run deep into the tens of thousands of dollars.

Kahne says that as the economy has gone under, HOA management companies and lawyers have been making millions off homeowners through this foreclosure process.

Suddenly faced with a demand that they pay $3,000 immediately or lose their home, many disbelieving homeowners don't know where to turn.

With the recession, foreclosure filings for delinquent HOA assessments in Texas have increased from about 1 percent of all home foreclosures to more than 10 percent currently, according to the industry.

'Won't You Be My Neighbor'

Over the past 20 years, HOAs have exploded across Texas. While there are 1,100 municipalities, there are now 30,000 HOAs. And these associations have far more power to take away a citizen's home than any city or county in Texas.

The perception that the balance of power has swung too far toward HOAs has begun to permeate the Texas Legislature. Reform legislation has passed the Texas House of Representatives, but no bill has been able to make it through the state Senate.

Basically it's everything to us. Having a house like this paid for was huge for us, for our retirement plans. We thought we were so far ahead, and now it's like we're starting from the beginning.

Capt. Mike Clauer, whose house was foreclosed on after two missed HOA payments

"Associations are a collection of neighbors," says Republican state Sen. John Carona, who represents Dallas. "The goal has to be to work well together -- have a harmonious community -- and to create a lifestyle that people enjoy and want to be a part of."

In addition to representing Dallas, Carona owns the largest HOA management company in the country -- Associa, which has more than 100 offices, 6,000 employees and 7,000 HOA clients in 30 states and Mexico.

Carona defends the rights of HOAs to foreclose for delinquent dues, even for small amounts.

"If an association did not have a means, a forceful means, to collect that money from any homeowner who, for whatever reason, couldn't pay, it places an unfair burden on every other owner in that association," Carona says. "And a burden, quite candidly, that those other members didn't bargain for."

There have been complaints that some members of HOA boards have bought HOA-foreclosed properties for a pittance, and then sold them for a hefty profit.

In Texas, there are no laws to prevent this. Carona says the best way to address this apparent conflict of interest is not by passing new state laws but by letting the HOAs handle it internally through modification of the association's constitution.

"I think that an association can avoid that type of thing by adopting conflict-of-interest rules," he says.

Republican state Rep. Burt Solomons from North Texas has been trying in vain to pass HOA reform legislation. He says during state legislative hearings there was no shortage of outraged homeowners, but he acknowledges that the HOAs, their property management companies and their lawyers fought back effectively. 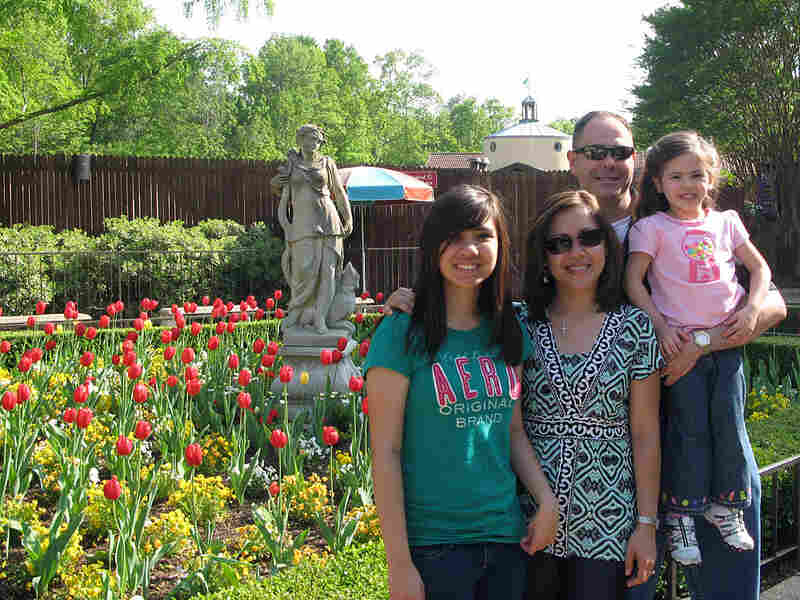 Pending a legal case, Clauer, his wife, May, and his daughters, Kirsten and Kamryn, are still living in the home that was foreclosed on. Courtesy of Mike Clauer hide caption 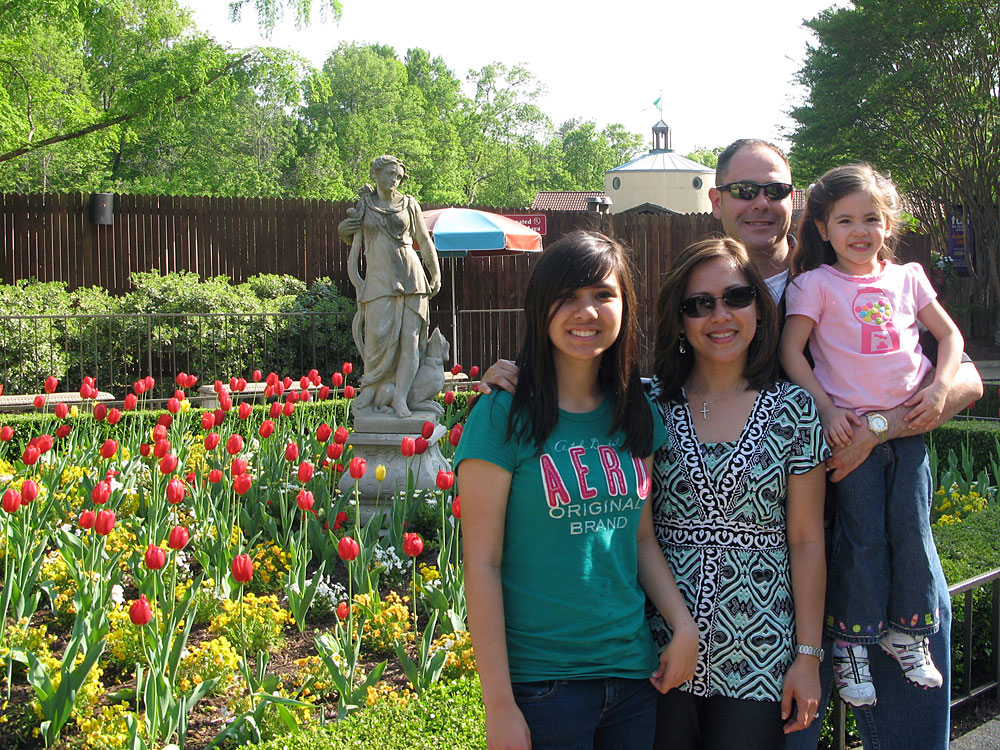 Pending a legal case, Clauer, his wife, May, and his daughters, Kirsten and Kamryn, are still living in the home that was foreclosed on.

Solomons says HOA board members and advocates testify and say, "'We need the power to access and fine and foreclose, and we need the money. And we look for people in violation of the rules and restrictions that we put in place.'"

"And they drive around in golf carts looking for them," Solomons says.

As for Clauer, he's gone from fighting in Iraq to fighting his HOA in Texas. And if he weren't in the military, Clauer would have no legal recourse at this point.

But in a spasm of gratitude in 2003, Congress passed the Servicemembers Civil Relief Act, which was supposed to prevent nonjudicial foreclosures against military personnel fighting overseas.

"Hopefully we're going to get the house back," Clauer says. "That's what we're fighting for -- that the judge will understand that this was illegal. That the HOA can't do what they've done."

If a federal court decides in favor of the Clauers, the foreclosure and subsequent sales of their home would have to be unwound and the deed returned to them. If they lose, the captain's nice, paid-for, suburban home would be lost to his family forever. The case goes to court early next year.