Accessibility links
Filmmaker's Goal: To See Combat Through GIs' Eyes In 2007, British photographer Tim Hetherington and American journalist Sebastian Junger traveled to Afghanistan to make a documentary. The resulting film, Restrepo, is an unflinching look at war through the eyes of the soldiers fighting it -- just life in combat, no talking heads allowed. 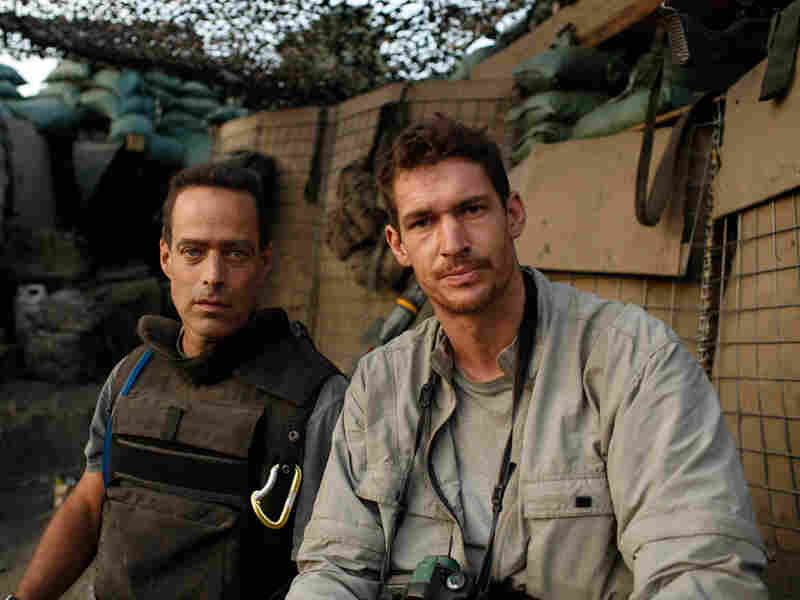 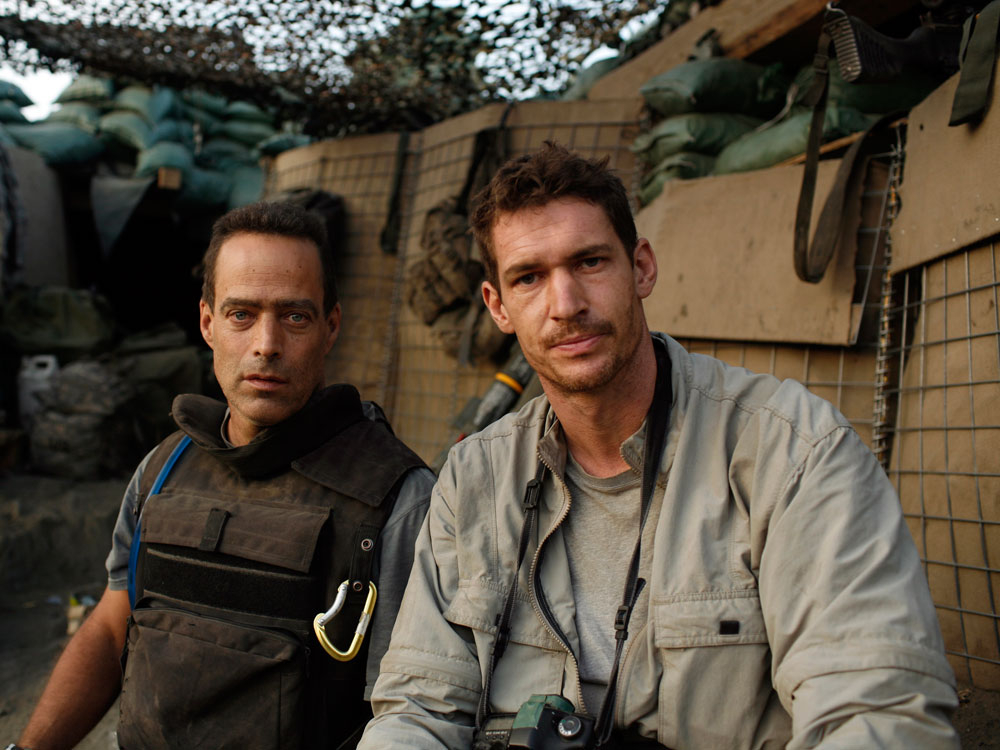 Restrepo directors Sebastian Junger (left) and Tim Hetherington pose for a photo in Restrepo, an outpost in Afghanistan's Korengal Valley. Their film was awarded the Grand Jury Prize for best documentary at this year's Sundance Film Festival.

Photographer and filmmaker Tim Hetherington thought he knew what to expect when he arrived in Afghanistan to make a documentary film. He figured his team "would be walking around the mountains, we would be drinking cups of tea with elders, we'd occasionally get shot at, and it'd be pretty uneventful."

The reality was "completely the opposite." Hetherington, along with co-director Sebastian Junger, decided to shoot at a remote outpost called Restrepo in Afghanistan's Korengal Valley, where a platoon of the 173rd Airborne Brigade Combat Team was stationed.

"By the end of the first couple months we were there, 70 percent of American bombs being dropped" in Afghanistan were falling on the Korengal Valley, Hetherington tells NPR's Michele Norris. And the unit was "sustaining a casualty rate of killed and wounded at 25 percent."

Despite the harrowing circumstances, Hetherington found that it wasn't always difficult to be in Restrepo, which was given its name to honor a fallen combat medic. (And which would eventually give its name to the film Hetherington and Junger made.)

"Because it was so high up, it was incredibly peaceful when there was no fighting," he remembers. "In fact, there was one little area where we would sunbathe. We used to joke that if there was a really good sniper on the other side of the valley, he could probably take us out." 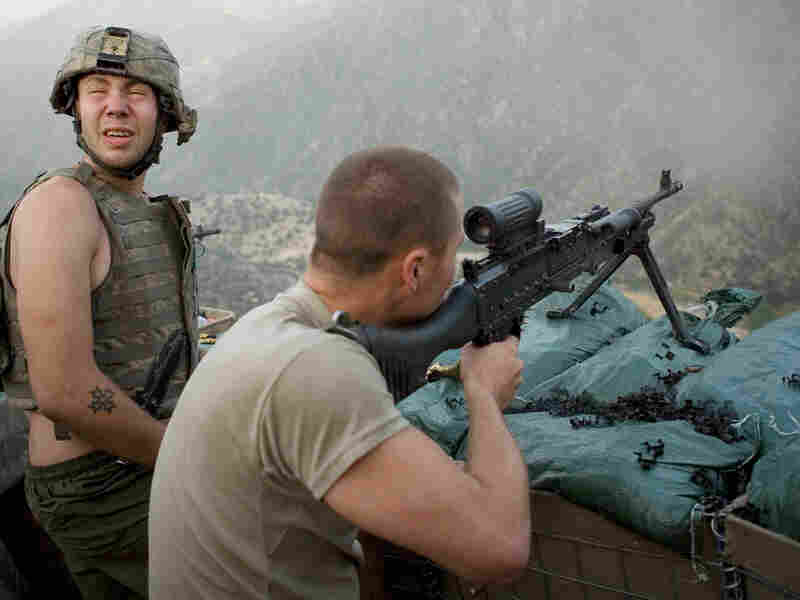 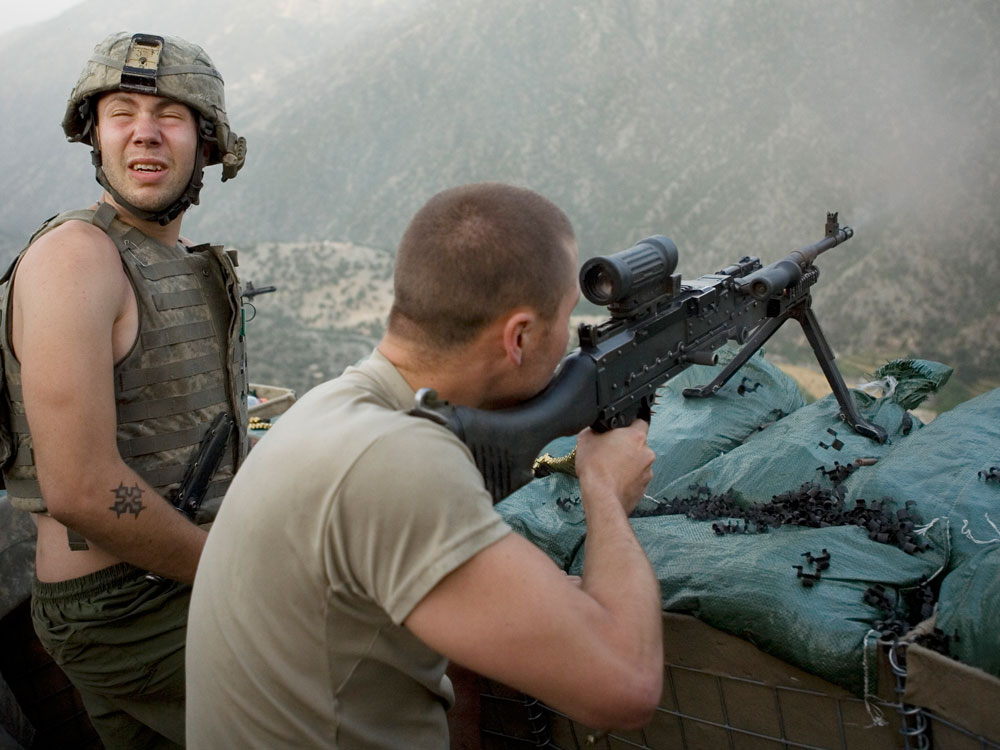 Hetherington and Junger lived for many months in 2007 and 2008 among the men of Restrepo, and Hetherington says he eventually became close with the platoon. In fact, one series of traumatic events made the photographer feel like he'd been accepted by the soldiers as one of their own.

'A Film From A Soldier's View'

After a disastrous combat operation called Rock Avalanche, during which American lines were overrun by insurgents and the platoon's men were being killed at "a pretty close range," Hetherington broke his leg on a night trip to a small village. It was critical for the platoon to get off the mountainside before dawn, and the company's medic told Hetherington he'd have to walk down the incline despite his injury.

Hetherington left soon after to get surgery on his leg; when he returned to the unit, he felt a different, more substantial bond with its members.

"I think they saw that I was willing to go the whole way with them," he says. "And that I came back."

At other times, though, Hetherington's camera couldn't help but make him an automatic outsider.

As the Rock Avalanche operation was under way, the director kept his cameras rolling, even though he remembers feeling like he was in a state of shock. When a soldier named Larry was killed in combat, members of the Afghan army began to drag his body away. Hetherington remembers one of Larry's friends shouting at their Afghan colleagues, saying, "You can't drag off his body!"

Remembering the horrific scene overcomes Hetherington, and he pauses for several seconds. "Those were very traumatic moments for me, and you try to digest them, but it takes time," he says finally.

When he is able to speak again, Hetherington resumes his story. The same soldier who was shouting at his Afghan comrades noticed that Hetherington was filming the whole thing -- and angrily told him to switch off his camera.

After some time had passed, the soldier apologized, Hetherington recalls. He told the director, "We know why you're here, and we really appreciate what you're doing," Hetherington says.

It meant a lot to the filmmakers, who had a clear vision for the project they wanted to make: "a film from a soldier's view."

Hetherington and Junger set out to create an overtly nonpolitical documentary, so that regardless of personal politics, audiences could see Restrepo and "digest what these men go through."

Most of all, Hetherington says, he wants the film to serve as a starting point for a discussion about the war.

"The world is very much focused on Iraq," he argues, even though the war in Afghanistan has dragged on for nearly nine years. "We hope that the film is a keyhole through which this country can start to understand what is happening out there."