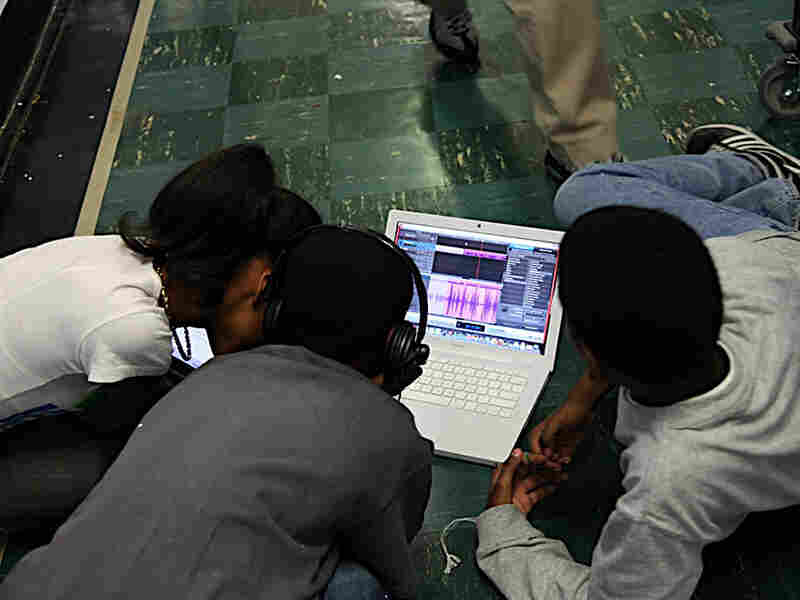 Students at Quest to Learn in New York City huddle around a computer to work on a podcast. At the school, students can design and create podcasts and video games as part of the curriculum. Courtesy of Quest to Learn hide caption 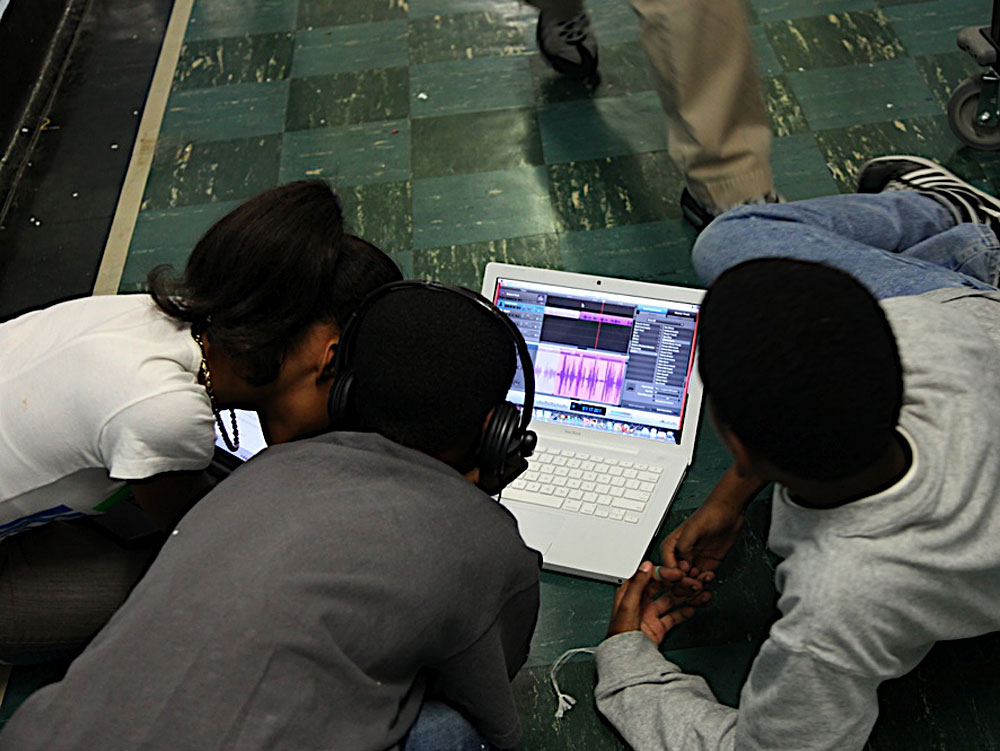 Students at Quest to Learn in New York City huddle around a computer to work on a podcast. At the school, students can design and create podcasts and video games as part of the curriculum.

Courtesy of Quest to Learn

A novel public school in New York City has taken the video game as its model for how to teach. Students use video games and design them as part of their classes. As Quest to Learn is wrapping up its first year, those behind the program say game-based learning is integral to 21st century literacy.

A 'Key' To Learning

Most kids don't need instructions to figure out how to play video games. Something about these games turns kids into phenomenal learners.

"The big idea of the school is we looked at how games work -- literally how they're built and the way they support learning -- and we thought could we design a school from the ground up that supported learning in the way games do," says Katie Salen, one of the executive directors of Quest to Learn.

This idea has been advocated for years by scholar James Gee, one of Salen's mentors. They believe video games are key to a new kind of literacy.

"In math, we're traveling around the world," says sixth-grader Rocco Rose, a student at Quest to Learn and a citizen of Creepytown -- an imaginary city where his class learns math and English. The students play travel agents, convert currencies, keep blogs about their travel experiences and budget trips.

Creepytown is structured like a video game that has jumped out of the computer. During their 10-week "missions," students learn to adapt and improvise.

"The second trimester, Creepytown went broke," Salen says. "They had ... an economic crisis. So the kids worked to figure out ... what had gone wrong. And then they proposed the design of a theme park to bring revenue in."

Getting involved with the school, since there has been no program previously existing quite like this, was a complete leap of faith ... like jumping off a bridge.

Sam Clayton, who sends his child to Quest to Learn

Students "learn how to solve problems, how to communicate, how to use data, how to begin to predict things that might be coming down the line," she says.

They also learn something called systems thinking, which Salen says is one of the cornerstones of 21st century literacy. It helps you understand how the behavior of a derivatives trader in Hong Kong affects housing prices in Florida. When a system becomes sufficiently complex, Salen says, you start to get outcomes that are hard to foresee.

In a classroom across the hall from Creepytown, 12-year-old Liam Smith is working with his team to storyboard one of Aesop's fables. It's the first step of the game-design process.

At Quest to Learn, students not only play in gamelike environments, they also make video games. Salen says there's no better way to learn systems thinking than by making one. It's also familiar, says Liam.

"When you start playing games at age 3, I think it just comes naturally to you," Liam says.

For parents, though, video games aren't necessarily so familiar. Sam Clayton says choosing to send his child to Quest to Learn was a difficult decision. "Getting involved with the school, since there has been no program previously existing quite like this, was a complete leap of faith ... like jumping off a bridge," Clayton says.

Will It Make The Mark?

But Quest to Learn participants take the same standardized tests that all public school kids take. 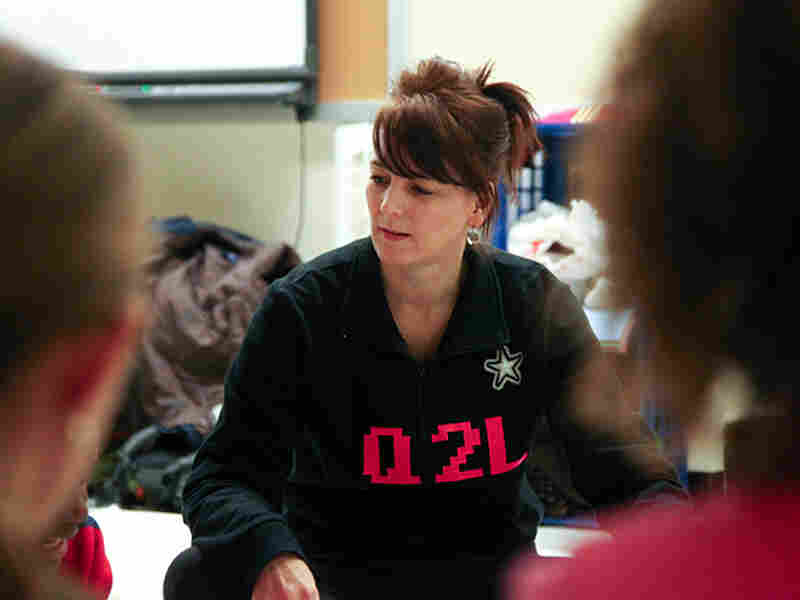 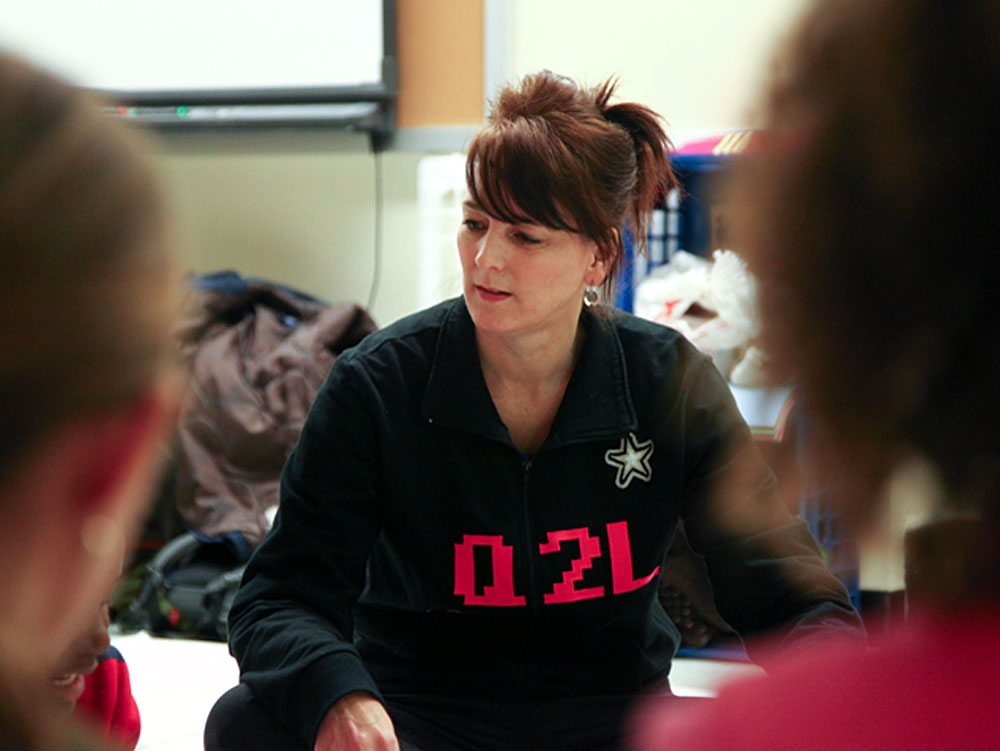 Katie Salen, an executive director at Quest to Learn, says video games are an important component of 21st century literacy.

Courtesy of Quest to Learn

Shute says she has already seen significant improvement in systems thinking among the students, and she is optimistic traditional skills like math won't take a beating.

For Salen, the bottom line of 21st century literacy is empowerment.

"What systems thinking does is it gives you a tool to manage complexity," she says. "Because of the complexity of problems, if you're not able to look at them as a system, you're just going to look at a blur. You will just be overwhelmed by the complexity."

The school had around 500 applicants for 80 slots in next year's class, so Creepytown should thrive for at least another year.