Accessibility links
Remembering Why We Love Michael Jackson It's been exactly one year since the death of Michael Jackson. Shaye Areheart worked with Jackson on his autobiography, Moonwalk, and remembers him for his humor, thirst for knowledge and dedication to fans. She looks back at the man beyond the headlines. 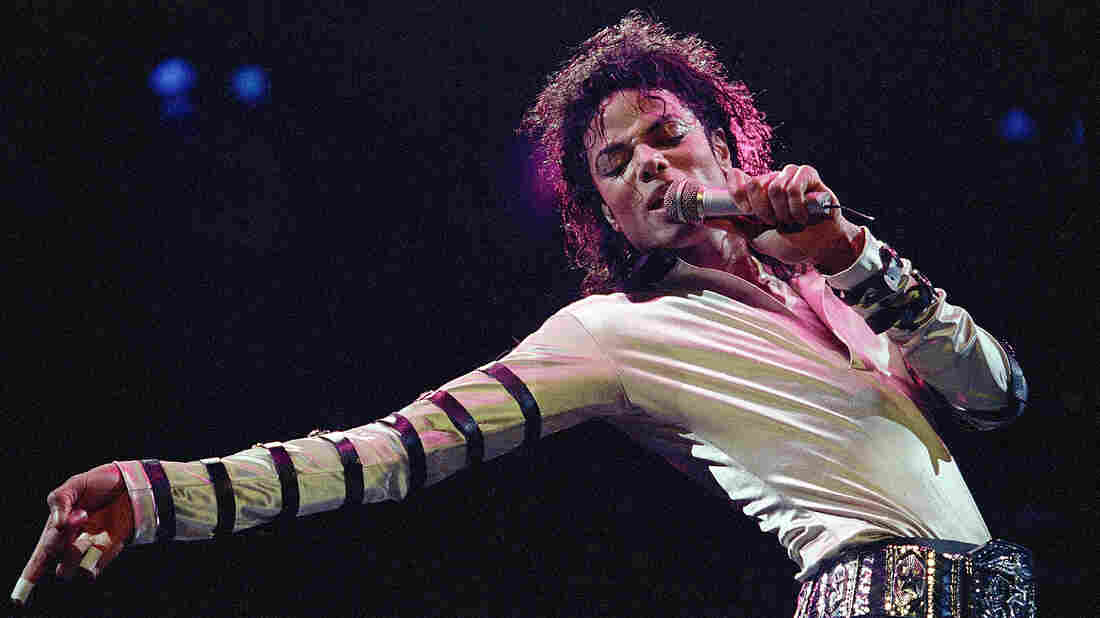 Michael Jackson is seen here performing during his 13-city U.S. tour in 1988. Editor Shaye Areheart says Jackson made every effort to give his all on while performing. Cliff Schiappa/AP Photo hide caption

Today marks the first anniversary of Michael Jackson's death. Fans around the world will commemorate and celebrate his life and music. He was 50 years old when he died from an apparent drug overdose. Host, Tony Cox had a conversation with Shaye Areheart. She is an editor who worked with Michael Jackson on his official autobiography, MoonWalk. Below, are excerpts from that conversation.

More than anything else, of course, I wish that Michael was still with us. But the interesting thing that's happened in the year since he died -- and it happened almost immediately after he died -- was that people began to reevaluate what a music genius Michael Jackson was. All of his backlist and albums went to number one.

Michael Jackson was reported to have been in financial straits just prior to his death. However, according to Billboard Magazine, Michael Jackson sold more than $1 billion dollars worth of merchandise, music and movie tickets. Album sales and box office receipts for his movie, This Is It topped off Jackson's money making coffers.

People were in absolute awe of the genius of this man. I think it was easy to have that forgotten when many headlines were tabloid nonsense.

I personally never saw anything quirky or odd about Michael. He was full of fun; he was someone who loved to have a good time, loved to play practical jokes on people -- and loved to laugh. He was incredibly intelligent and read all the time -- always carrying a book around with him that had words underlined, comments of his own in the margins.

I once spent two or three hours in a book store with him in San Francisco between interviews because he was just so crazy about learning and about knowledge. He was fascinated about entertainers who came before him and entertainers who were his contemporaries. He was a very interesting man, but I never saw anything or heard anything that would give resonance to any of the headlines that many people hung on.

People love Michael Jackson for the entertainer he was, for the musical genius he was. People were always conflicted by stories in headlines and whether or not there was any truth to them. He was found innocent when he was in court.

Jackson had gone from being hailed as the "King of Pop" to the eccentric "Wacko Jacko". The general public and media personalities remarked constantly on Jackson's physical metamorphosis. He'd gone from the boy with cocoa brown skin and a pug nose to an egg shell white caricature with a detachable nose. And, there were allegations of child molestation -- Jackson settled out of court for one set of claims in 1994. He paid a reported $20 million dollars but criminal charges were never filed. And, in 2005, a jury acquitted him of all charges in an earlier child molestation case.

And I think with our system of justice -- if you're found innocent, you are innocent. I don't think it has any bearing on Michael.

He was a profoundly fine musician -- an incredible songwriter, singer and performer. He just had it all. When Michael walked on stage you could not take your eyes off him. He was so dedicated to his fans and his audience mattered so very much to him that he went out there and gave it his all.

The resurgence of that interest in Michael is people seeing, 'My god, that music was unbelievable -- I have to have this album, I have to see this movie. I want to have Michael Jackson firmly in my life.'