Accessibility links
Lessons From Harlem Take Root In Tribal Lands The Obama administration is giving out federal grants to "Promise Neighborhoods," in an effort to improve education for poor areas. The model program is the Harlem Children's Zone. To work in areas of grinding rural poverty -- such as Cortez, Colo. -- those techniques must be adapted.

Second of a two-part series. 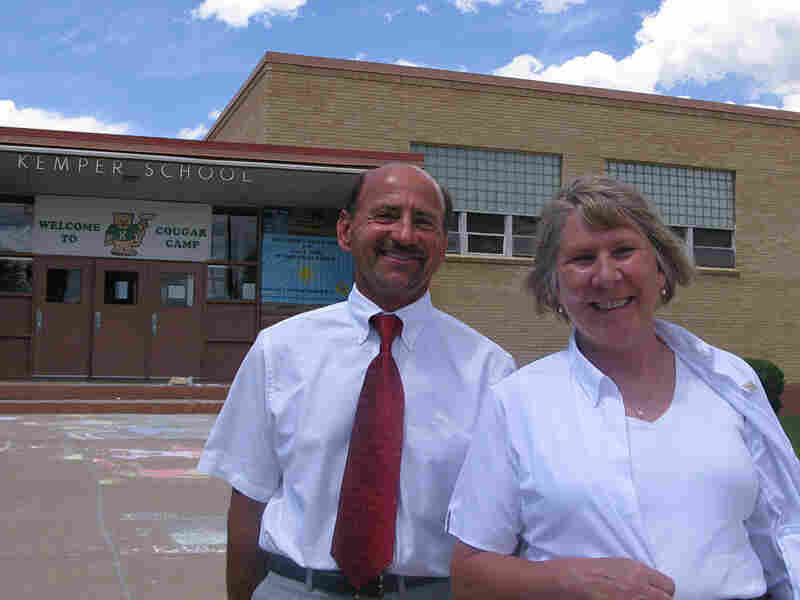 Robert Rime, education director for the Ute Mountain Ute Nation, and Diana Buza, executive director of the Pinon Project, are spearheading an effort to get a federal grant under the federal "Promise Neighborhoods" initiative. Larry Abramson/NPR hide caption 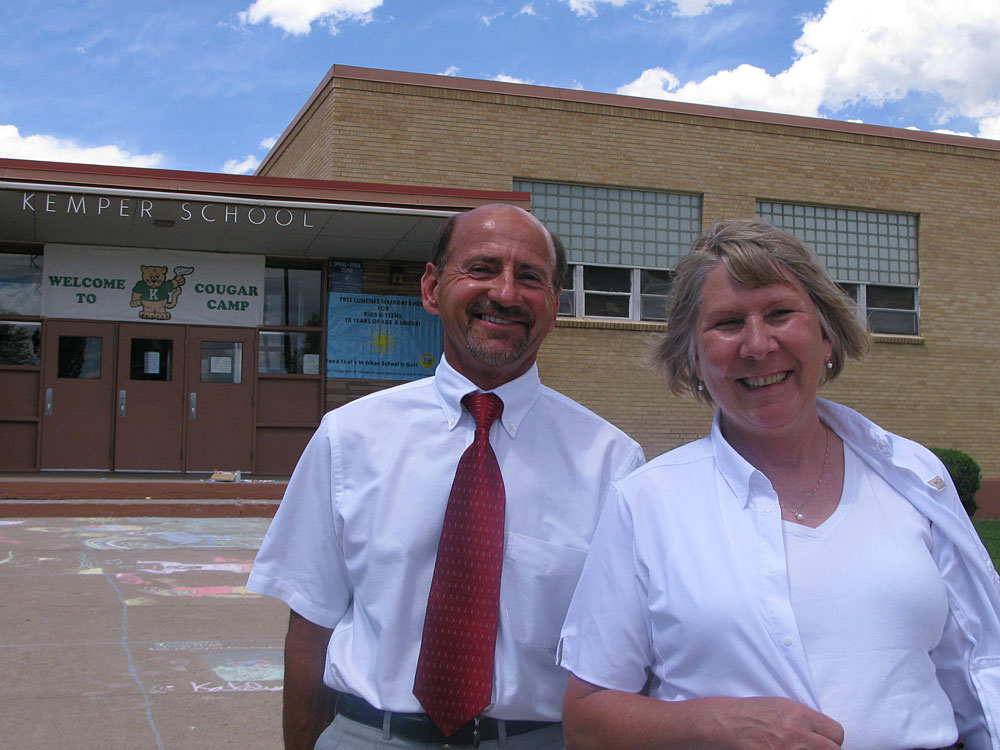 Robert Rime, education director for the Ute Mountain Ute Nation, and Diana Buza, executive director of the Pinon Project, are spearheading an effort to get a federal grant under the federal "Promise Neighborhoods" initiative.

When community activist Diana Buza read about plans to clone the Harlem Children's Zone with government funding, she said, "Count me in."

But she's far from Manhattan; Buza lives in Cortez, Colo., and runs The Pinon Project, which helps low-income residents -- many of them Native American -- learn how to be better parents and find health care and day care.

"When I read the Harlem project's success rate, it was something like 87 percent of the children involved improved increased their academic skills," Buza says. "I was like, 'That's a no brainer.' "

Pt. 1 Of This Report

The Harlem Children's Zone is a widely-praised program that is fighting the effects of poverty in a poor section of New York City. Now, the Obama administration wants to spread this program around the country by giving out federal grants to so-called "Promise Neighborhoods." The program is trying to encourage rural and tribal communities to apply, but the areas face obstacles as they try to emulate a program that was developed to combat urban poverty.

A Model Transplanted In The West

The Pinon Project is based in a collection of former church buildings in a residential neighborhood of Cortez.

"We have a health advocate, and two family advocates," Buza says. Her voice drops to a whisper as she walks through the child-care center, where kids are taking a nap. Finding good child care is a big challenge in rural areas.

The Pinon Project really does look like a small-town version of the Harlem Children's Zone.

Diana Buza of the Pinon Project

Still, the superintendent of the Montezuma-Cortez schools, Stacy Houser, says they're not getting the results they want -- the high school's graduation rate is only 62.7 percent. "It's pretty bad," Houser says.

Here as elsewhere, the effects of even the finest day-care and parenting programs often fade away as kids get older. It's hard to knit together a checkerboard of services into a lifetime plan that brings long-term results.

The folks behind the Pinon Project will have to convince federal evaluators that, with some financial help, they can bridge the gaps between different local programs.

One of the biggest challenges in this area is getting Native American kids to stay in school -- kids like Arnelda Hatale, a Navajo woman who now lives in a small trailer with her boyfriend. 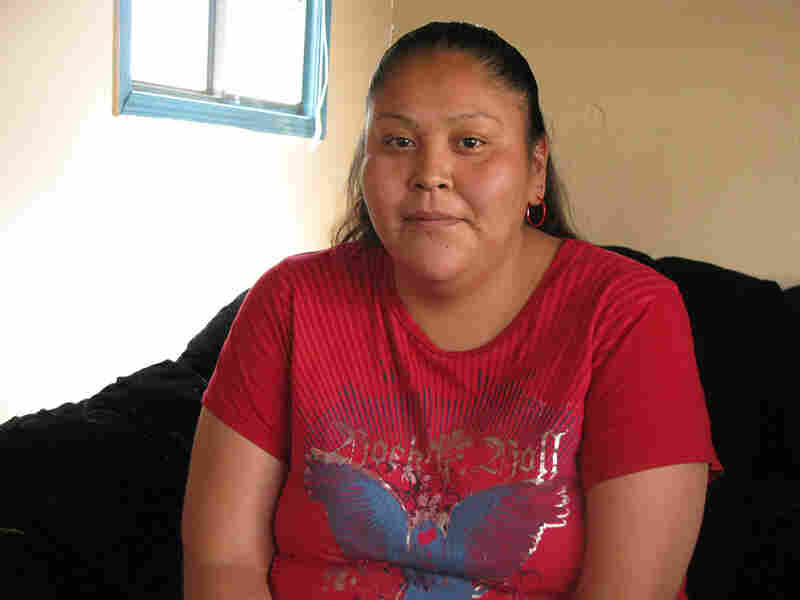 Arnelda Hatale, a member of the Navajo tribe living in Cortez, Colo., dropped out of high school. But she later got her GED, thanks to a local adult education course. Larry Abramson/NPR hide caption 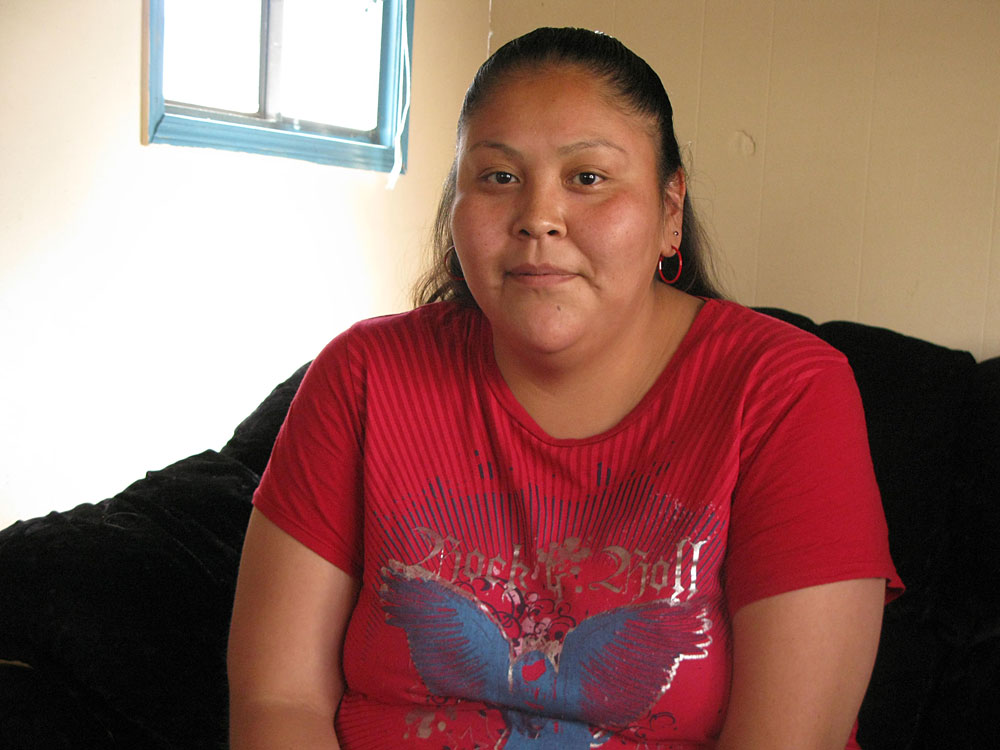 Arnelda Hatale, a member of the Navajo tribe living in Cortez, Colo., dropped out of high school. But she later got her GED, thanks to a local adult education course.

She sits on her black velvet couch, and says she had to leave high school in her junior year to help support her family.

That's not an uncommon story for Native American kids. But after years of working in entry-level jobs, Hatale switched gears, and ended up getting her GED at age 28. Her path back to school got started when she was confronted by a clerk in the welfare office.

"And it just kind of seemed like she was like, talking down?" Hatale says. "And that made me mad, a little bit. And I said, 'I'm gonna get my GED, just watch!' "

It's a heartening story, but Cortez will have to take that random event and turn it into a regular result. Hatale got her diploma thanks to the Unlimited Learning Center, an adult education program in Cortez. Director Ann Miller says she could get more adults back into school. But the focus, these days, tends to be on pre-kindergarten.

"Parents are the first teachers of the children," she says. "So sure, they have a great school experience in K to 3rd grade, but they go home, and they have that every night. The parents are very important to focus on. We'll get a pinch out of this grant."

So if the people in Cortez get the "Promise Neighborhoods" grant, they'll still have to figure out who gets the money.

Torn Between Town And Reservation

People here often say that small-town relationships are close. But for a small place, there are a lot of service providers, and a lot of constituencies to satisfy: Hispanics, Navajos living off their reservation and the Ute Mountain Ute tribe, with its own reservation and casino in nearby Towaoc, Colo.

The tribe has its own day-care center, but students must switch to schools in town, where they struggle. Kids can study Navajo in high school, but not their own Ute language. That's led many here to call for a school on the reservation. Jaunaree Mills, who helps run the day-care center, thinks that would be a mistake.

"Even if we had a school here, I would still send my kids to Cortez, because they need that integration, learning to deal with other people," she says. She adds with a laugh her husband Michael does not feel the same way. "He's really pushing for having a school here on the reservation."

Michael Mills echoed the feeling of many on the reservation -- that it would be easier to teach kids in their own Ute culture, if they had a school.

Whether or not a Ute school would help, it would cost money. Everything does. One thing this town does not have is lots of rich friends -- Harlem Children's Zone CEO Geoffrey Canada has brought in millions thanks to the proximity of foundations and wealthy donors.

Buza of the Pinon Project says raising money has always been tough, and has been more difficult with the local economy continuing to lag.

The first-round planning grants are worth up to $500,000 a year for each of the 20 communities -- and 943 groups have announced plans to apply. The deadline is Monday. After the planning grants, there will be larger "implementation" grants, in the $10 million range, to put those plans into practice.