Accessibility links
Director Lisa Cholodenko On Conceiving 'The Kids' The film The Kids Are All Right stars Annette Bening and Julianne Moore as a couple whose two teenage children have decided to track down their moms' anonymous sperm donor, played by Mark Ruffalo. Director Lisa Cholodenko explains how her own experiences inspired the film. 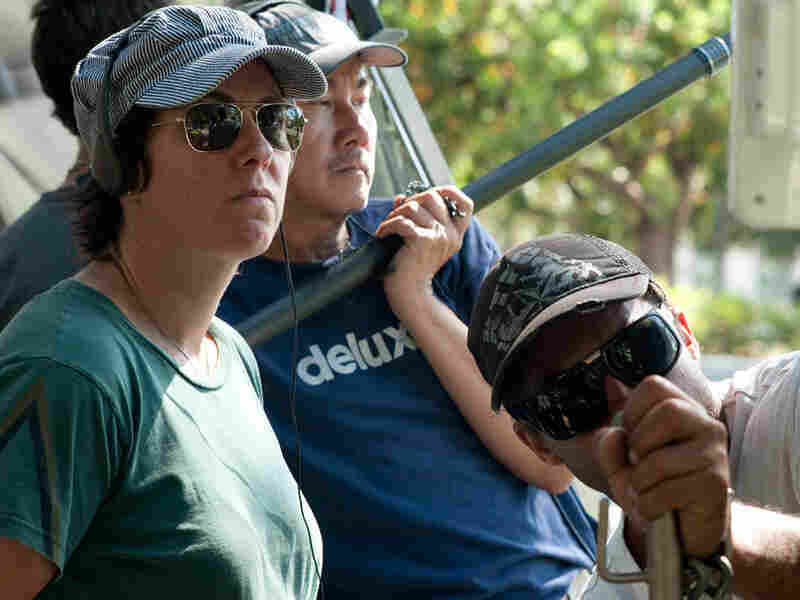 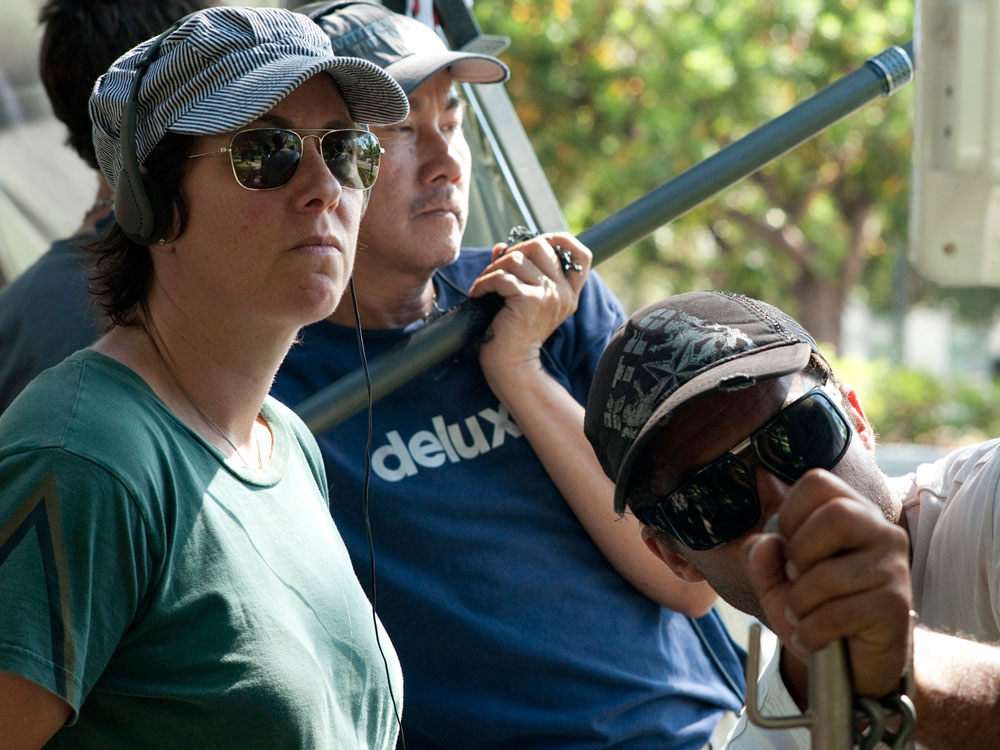 Lisa Cholodenko was an assistant editor on Boyz n the Hood and Used People before she attended film school at Columbia University.

The film The Kids Are All Right stars Annette Bening and Julianne Moore as a couple whose two teenage children have decided to track down their moms' anonymous sperm donor -- played by Mark Ruffalo.

The indie film was written and directed by Lisa Cholodenko, who came up with the plot for the suburban comedy five years ago, when she and her girlfriend decided to have a baby.

"We had gone through a lot of conversations of which way to go," Cholodenko tells Fresh Air's Terry Gross. "Do we go with a friend? Do we do this with this anonymous person? And [if so,] what does that mean and what will it mean for the child ... in 18 years? So I became very absorbed in these meditations about ... the life of this child that I [was] hopefully going to have. And when I sat down to write an original script, I was sort of consumed with this idea."

Bonus: Cholodenko and her writing partner, Stuart Blumberg, were able to tell the sperm-donor story from both the recipient's and the donor's points of view, because Blumberg had donated anonymously while in college.

"I think at first I was being very provocative with him," Cholodenko says. "I said, 'Well, let's call your university and see if you have any offspring.' And all of the blood drained out of his face, and I could see that that was something he was horribly afraid to discover. Like, he wasn't interested in that, or he hadn't prepared himself for a phone call like that, and by no means was he going to seek out this offspring, if he in fact had any."

Cholodenko says she found it deeply interesting that "there would be this kind of range of reticence and fear" and wondered what it meant. "So we kind of chipped away at that reaction."

Cholodenko's other films include Laurel Canyon and High Art. She has also directed episodes of The L Word, Homicide: Life on the Street and Six Feet Under. 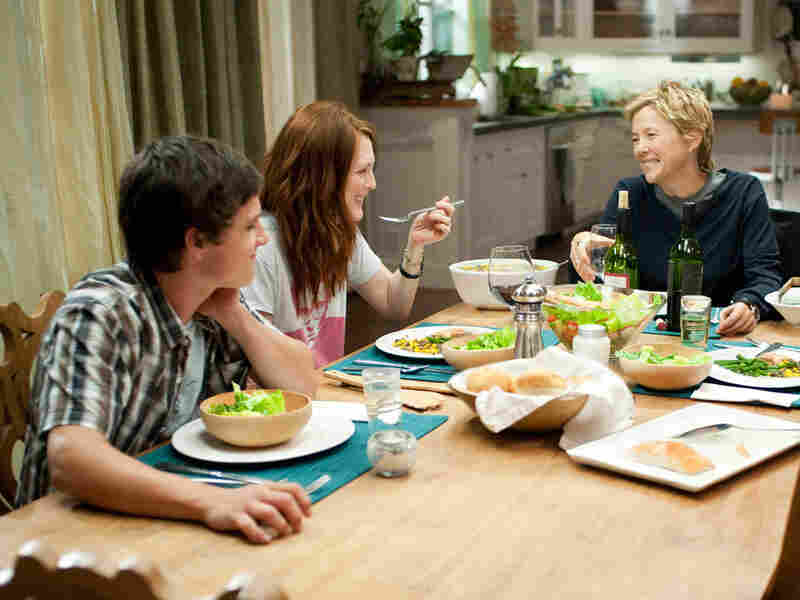 Julianne Moore (left) and Annette Bening play a couple struggling with their teenagers in The Kids Are All Right. Suzanne Tannen/Focus Features hide caption 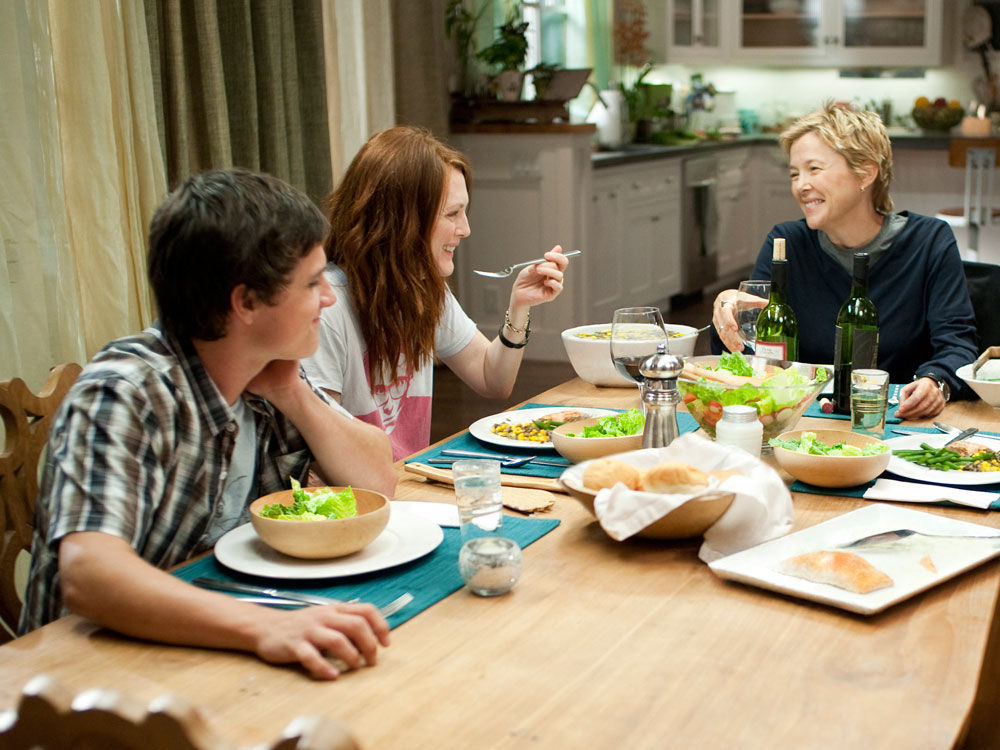 Julianne Moore (left) and Annette Bening play a couple struggling with their teenagers in The Kids Are All Right.

Cholodenko's movie High Art stars Radha Mitchell as Syd, an aspiring magazine editor in the thick of the New York City art scene in the late '90s. Through a plumbing accident, she discovers her upstairs neighbor, a prominent gay photographer played by Ally Sheedy, who lives with her drug-addicted German girlfriend Greta (Patricia Clarkson). Over the course of the film, Sheedy's character lets Syd into her life as their professional and personal lives begin to overlap.

"I [auditioned] amazing actors ... but no one had sort of nailed it for me. And the casting director came in one day and said, 'You know, I got a call from Ally Sheedy. And she called me herself. And she wants to fly herself to New York to read for you. Are you open to that?' And I sort of scratched my head and said, 'That seems so weird. Really?' It just made no sense. There was a certain part of me that thought that would be interesting, she's a known actor -- but all I could think of was The Breakfast Club. It just seemed weird. And I hadn't really followed her career or anything since then. And I also thought, 'Is it going to take my film in another direction?' I had a whole host of anxieties. Making the choice to cast someone in a lead role is a big one. You don't want to squander your opportunity. Anyway, I got home that night, and there was a phone call from Ally herself and she said, 'I feel like this is my life. This is an experience I have gone through, and I feel like you wrote this for me.' And I was like, 'Well, I'm glad you feel that way. I didn't [write this for you.]' And she said, 'Well, I feel like that, and I'm going to put myself on a plane and I'm going to be there tomorrow.' And she did it. She just hustled to New York and she read some scenes for me and against sort of my resistance -- and I was, I was predisposed to not casting her -- I felt like, 'Oh. You know this. You do know this. This could have been written for you.' I just said, 'Okay. You got it.' "

"I'm in my mid-40s now, and I came out in 11th grade, so I must have been 17. So that's quite a long time ago, and the temperature and the culture was different. And I was young. So it was fraught for me in the sense that I was in high school, and there weren't other people who were gay that I knew. So I felt different and confused about that. But I had a great love affair in high school, and let myself have that love affair and tried to keep it to myself. But I come from a very talkative and inquisitive and liberal Jewish family in a pretty liberal place -- Los Angeles -- and I sort of was eventually kind of outed by my mother, who took me aside one day and said, 'Well, it's obvious to me that you're in love with this person. You're struggling to kind of sort it out. So why don't you go get some therapy and feel better about it.' ... You know, 'As your Jewish mother, it's hard to see you struggling.' "