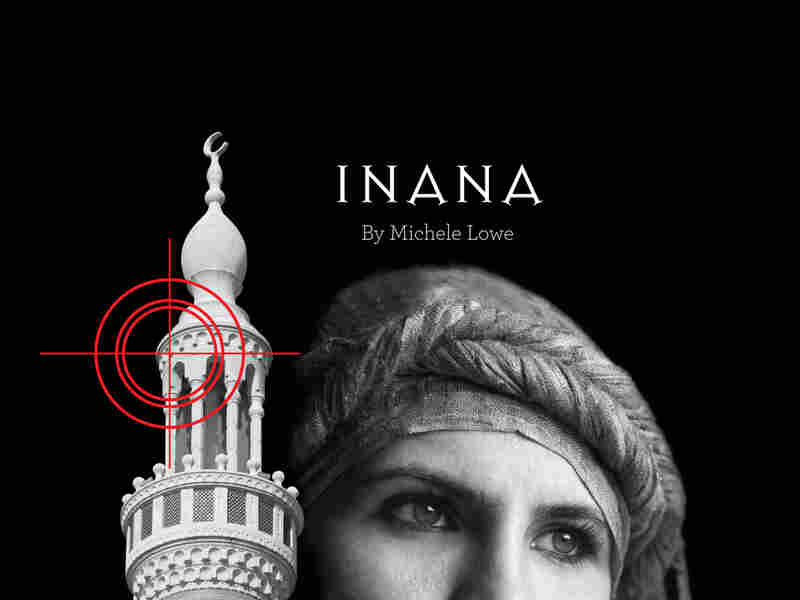 The play Inana, named after the goddess of sex and war, is a love story about an Iraqi curator who leaves his country for London. The play will be performed at the 2010 Contemporary American Theater Festival at Shepherd University in West Virginia. CATF hide caption 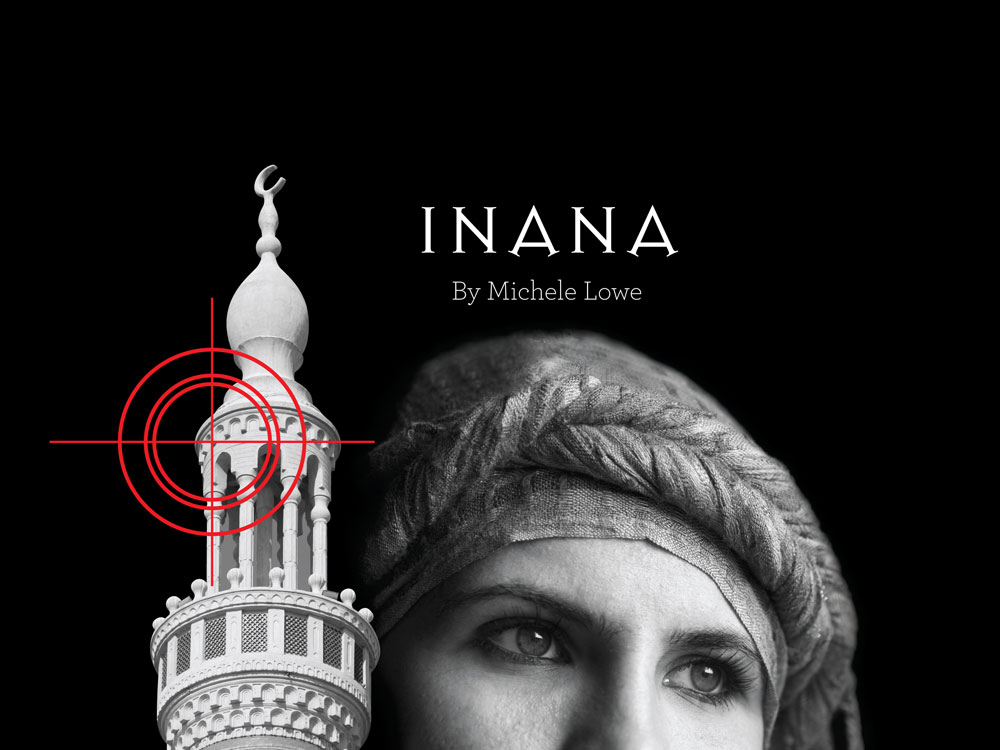 The play Inana, named after the goddess of sex and war, is a love story about an Iraqi curator who leaves his country for London. The play will be performed at the 2010 Contemporary American Theater Festival at Shepherd University in West Virginia.

For 20 years, brand new plays have found a home -- and a loyal audience -- in West Virginia's oldest town.

The Contemporary American Theater Festival at Shepherd University in Shepherdstown is a dream for the writers of those plays. Over the years, both up-and-coming playwrights and big names -- like Sam Shepard and Joyce Carol Oates -- have premiered works there. That's in large part due to the festival's hard-working founder, Ed Herendeen.

One of the plays at this year's festival is called Inana, named for the goddess of sex and war.

Inana is about many things. it's about stolen art. It's a love story set in the context of war. In the play, an Iraqi curator leaves his country for London, with four mysterious suitcases and his new wife from an arranged marriage. One critic called Inana an "international thriller."

Herendeen says it's exactly the kind of play he looks for.

"Here is a play where we're looking at Iraqi people in a positive light. These are not terrorists. They're not going to bomb anybody. These are people who love their culture and are desperate to preserve it in a time when they're being invaded by another country," Herendeen says.

Herendeen founded the festival 20 years ago in partnership with Shepherd University. That first season they did three plays and sold about 2,000 tickets. Today, they do five professional plays and sell more than 11,000 tickets.

It's a big tourist draw. It helps that Shepherdstown is in the Shenandoah Valley. What's unusual about the festival is that Herendeen says he's never tempted to do a popular play in order to draw more people.

"The audience we've developed really is expecting us to do new plays. So because we never veered from a mission since day one, we are known for doing adventurous new work," he says.

Herendeen says on average he reads about 75 scripts a year. He also scopes out new plays that other regional theaters are doing. He first saw a reading of Inana two years ago at the Denver Center Theatre Company. 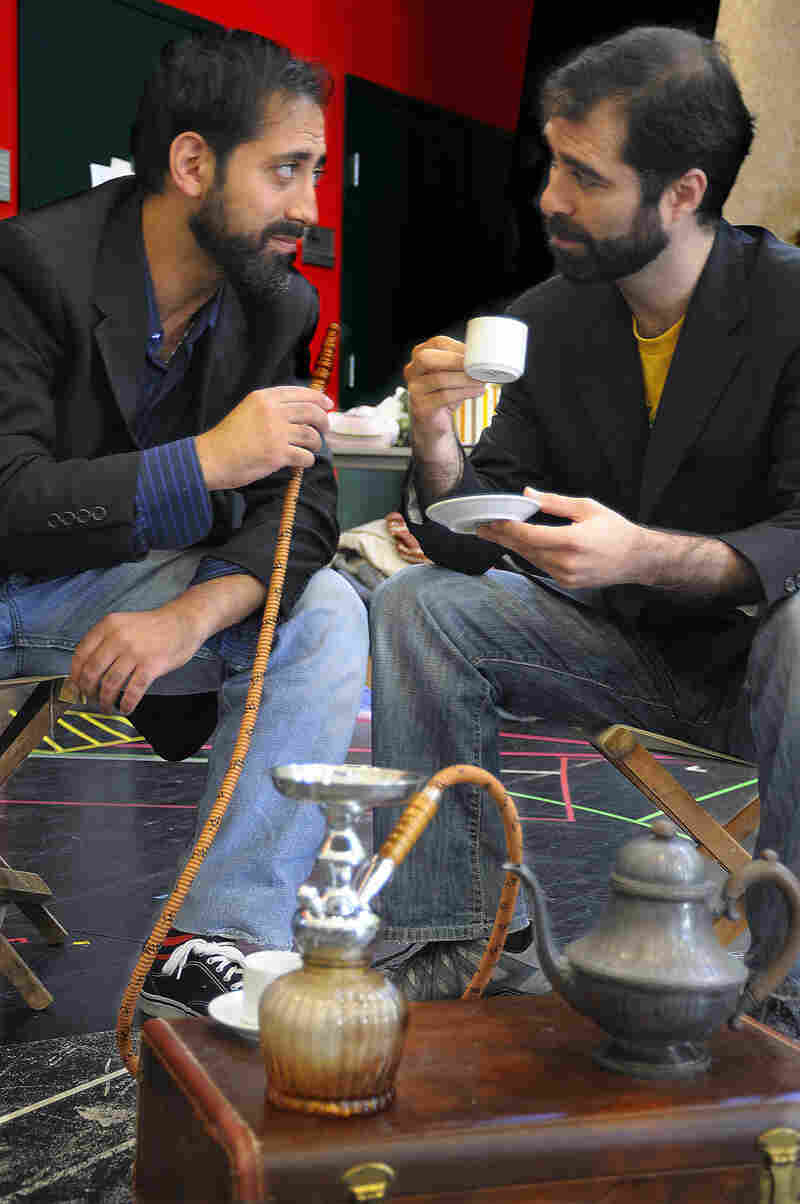 James Rana, left, as Abdel and Barzin Akhavan as Yasin in rehearsal for Inana, a play by Michele Lowe. Dennis Crosby hide caption

And this is something else about Herendeen: He doesn't suffer from what he refers to as "world premiere-itis" because that can hurt living playwrights.

"One of the things I've learned over the years, especially working with writers, that it's very difficult to get the first production, but writers tell me it's even more difficult to get production number two," Herendeen says. "In other words, once your play has had its world premiere, lots of theaters don't want to do it because it's been done. And then how does your play move on? How does your play have life beyond the world premiere?"

"That's a wonderful thing for a playwright to hear," Lowe says. "A theater's really taking a chance on this. Here's an artistic director who's going to make it work."

This is not to say Herendeen shies away from world premieres altogether. He says he too likes the buzz you get from being first. This year the festival is doing two world premieres. One of them could almost be called a musical.

"I cannot tell you the excitement and the buzz and the fear that we have -- it's good fear -- producing the 'Eelwax Jesus 3-D Pop Music Show,'" Herendeen says.

This play is set in some kind of group home somewhere in the United States, and everyone who lives there is addicted to a TV show called Eelwax Jesus. It was co-written by Max Baker.

"It's set slightly in the future where going outside is extremely dangerous because of the swine flu in the air, all the monkey pox, the air is being turned into toxic fumes. So everyone's stuck inside. And they're fed this entertainment. But the entertainment systems are so advanced it's as real as I'm sitting here," Baker says.

'The Thing About Theater People'

Baker and his co-writer, Lee Sellars, are also actors, based in New York. Sellars has been playing Officer Krupke in West Side Story on Broadway for the past couple of years. He's a Shepherdstown regular -- acting in plays at the festival for about nine years.

When asked if he's surprised the festival has lasted for two decades doing such edgy, unfamiliar work, he said: "Yes and no. It does surprise me in the real business world how would you do it. But then you meet Ed [Herendeen] and the people he's surrounded himself with -- the creative team, the artists -- and then it doesn't surprise you. It's like, 'Of course this is going well,' because he single-handedly refuses to let it fail."

But ask Herendeen the same question and he'll say it's because they have a great partnership with Shepherd University, that they have an engaged board of directors and that they're in a state -- West Virginia -- that's friendly to the arts. Herendeen doesn't get sentimental about the past.

"The thing about theater people is, we do a production, we spend all this time creating a play and then we take the set down -- we strike the set -- and I'm already thinking about next season," Herendeen says. "Because theater's not permanent. It lives in the moment. So I'm more interested in talking about the next 20 years in many ways."

In other words, there is still a lot of work to do. The 20th Contemporary American Theater Festival runs for three weeks beginning July 9.