Accessibility links
Mississippi Man Charged With Repairing BP's Image Bob Dudley, a BP executive from Mississippi, has been picked to replace CEO Tony Hayward as the face of the company's efforts to clean up the oil spill in the Gulf of Mexico. Dudley, who has spent much of his career abroad, has a relaxed style -- and nowhere to go but up. 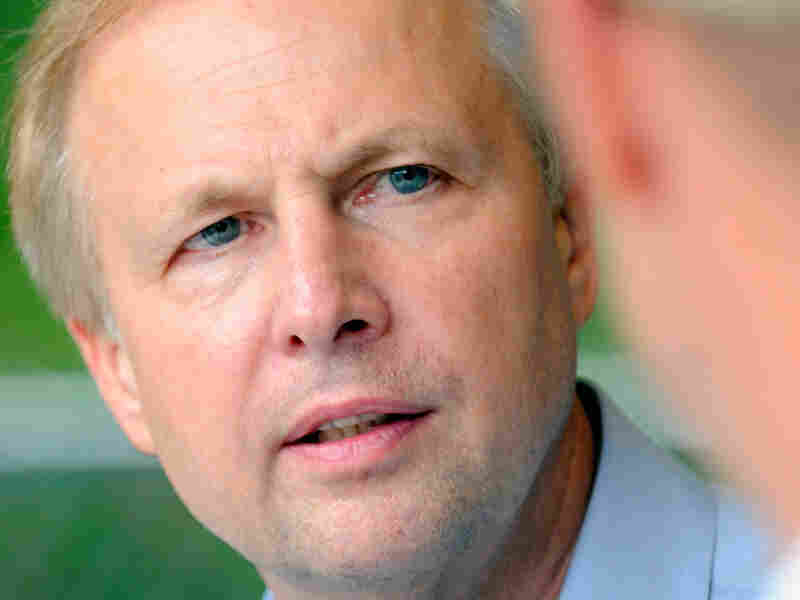 Bob Dudley, the BP executive picked to replace CEO Tony Hayward, has spent most of his career in the oil industry abroad. He headed up BP's joint venture in Russia TNK-BP. Cheryl Gerber/AP hide caption 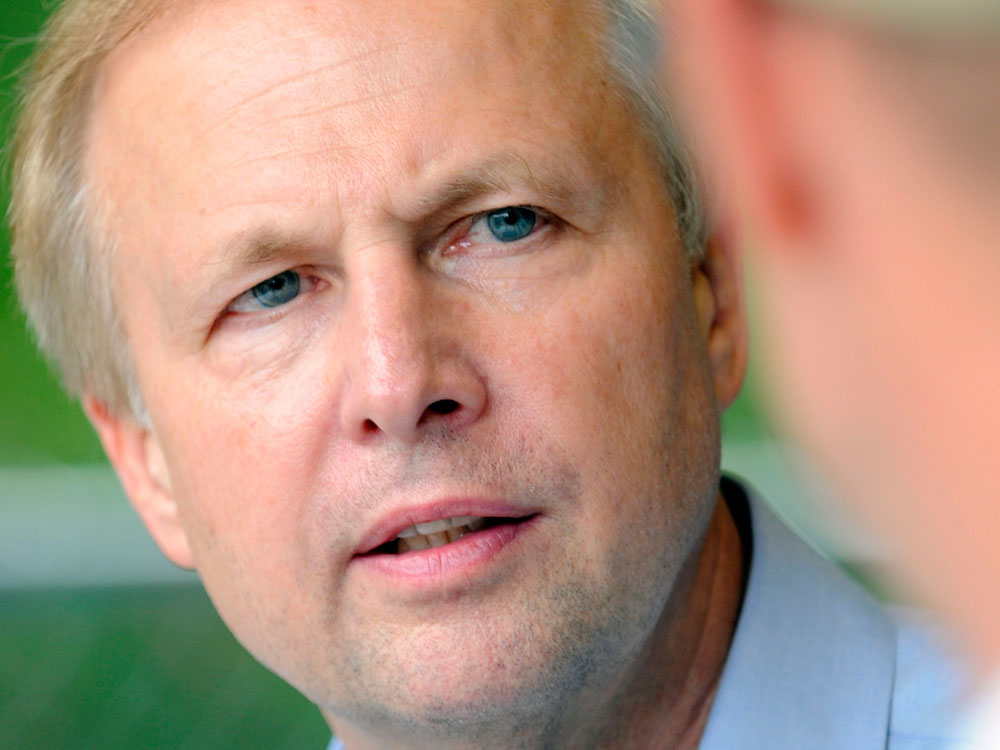 Bob Dudley, the BP executive picked to replace CEO Tony Hayward, has spent most of his career in the oil industry abroad. He headed up BP's joint venture in Russia TNK-BP.

Bob Dudley, a BP executive from Mississippi picked to replace CEO Tony Hayward, has a quite a task ahead of him: Take on efforts to clean up the oil spill in the Gulf of Mexico -- and repair BP's bruised image.

The first crack in BP's public relation facade came early, when Hayward said he hoped they would cap the gushing well in the Gulf of Mexico so that "he could get his life back." With 11 men who will never get their lives back and an ocean of oil bearing down on the coast, many felt Hayward's tone left something to be desired.

Then came Hayward's appearance before the U.S. Senate, where he fumbled for answers: "It's impossible for me to answer that question. ...I'm afraid I can't recall that. ...I was not involved in the decision making."

A few days later, when the BP CEO was spotted with his 52-foot yacht racing around the Isle of Wight off the coast of England, there were quite a few suggestions by Gulf Coast politicians as to what Hayward should do with his gleaming racing boat -- like bring it over here and pick up a few giant tar balls or skim some dirty crude out of the Gulf.

"There has been a high degree of tone-deafness from Hayward as BP CEO," says Chris Lehane, who worked in the Clinton White House for eight years. Now Lehane has his own firm specializing in crisis management. Lehane says BP's first mistake was putting Hayward out front.

"Anytime you're in a situation like this, whoever the point person, they're gonna have the professional life expectancy of a carton of milk," he says.

Having gone sour, the man who sounds like he stepped out of the House of Lords is being replaced by Dudley.

In a recent interview on PBS's NewsHour, Dudley's relaxed style was different -- if not necessarily his content -- when asked if BP had taken shortcuts on the drilling rig, Deepwater Horizon. 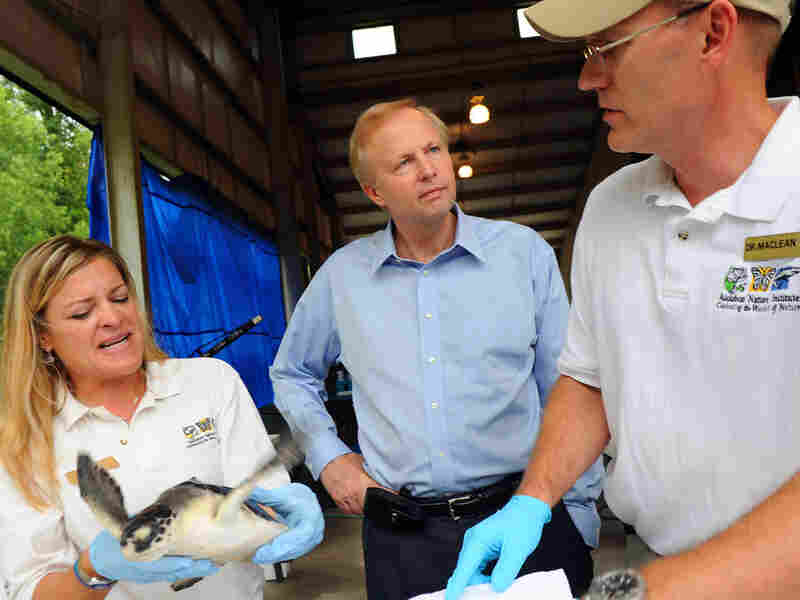 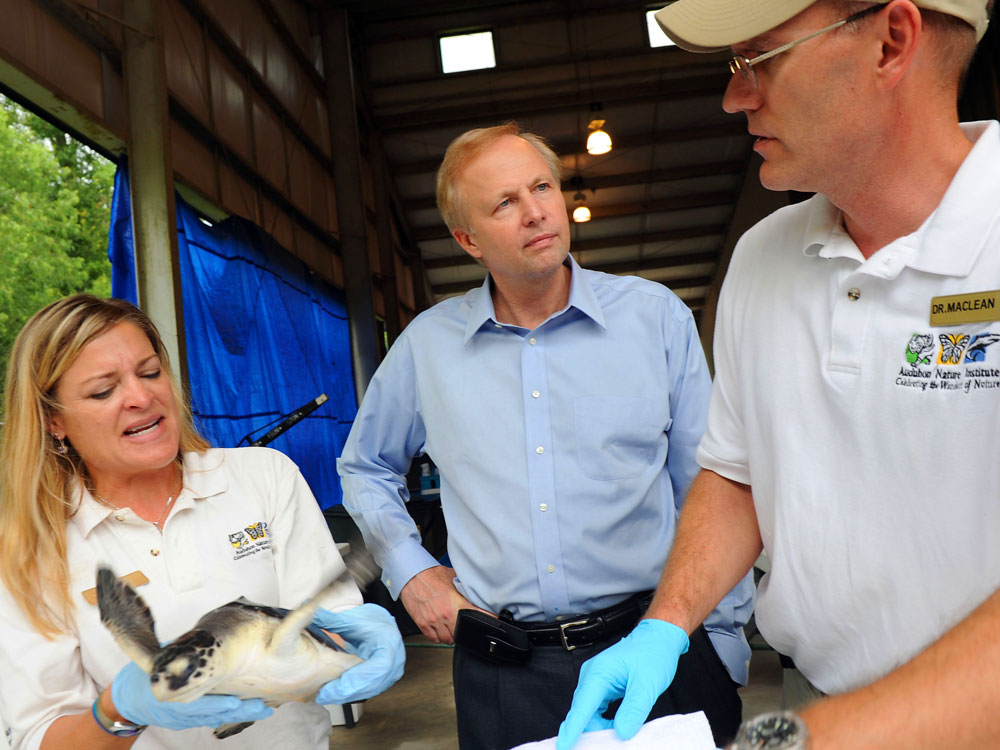 Dudley (center), who toured the Audubon Nature Institute's turtle rehabilitation center in New Orleans on Wednesday, is charged with repairing BP's image in the Gulf.

"This is an investigation of a very complicated accident," he said. "It's been that way from the beginning. There's lots of conflicting statements and information that comes out."

Much of Dudley's career in the oil industry has been abroad. He headed up BP's joint venture in Russia TNK-BP, but it ended up going badly for Dudley. The Russians became so angry with him they refused to let him back in the country. Matti Teittinen, a senior equity analyst with HIS Herold in Boston, has followed Dudley's career.

"They wouldn't renew Bob Dudley's visa ... so he had to actually go operate from another country outside of Russia. And eventually BP was forced to make some concessions and ultimately their overall control was reduced."

While that doesn't sound like an unqualified success, Teittinen says inside the industry Dudley was seen as having done as well as might be expected in a joint venture with nationalistic Russian oligarchs.

"The company was one of the more successful oil and gas companies in Russia during that time period that had pretty strong growth," he says.

Nowhere To Go But Up

While Dudley doesn't have to worry about his Southern credentials being revoked if too much oil washes ashore in Louisiana or Florida, this assignment will be no picnic either. Louisiana Rep. Charlie Melancon is watching his coastal district slowly die on the vine. He could not be less impressed with Hayward, but he's keeping an open mind about Dudley.

"I'm willing to give him the first opportunity to demonstrate that he truly does care about it. And being from Mississippi I believe that he'll have an understanding of the feelings of the people that are affected by this oil spill," he says.

But for Melancon and his district, in the end this is a results game, not a beauty contest.

"There's nothing that he can do, short of plugging that hole that will make him any better a person in terms of being able to accomplish the task at hand," he says.

Melancon says that for Dudley and his oil company, there is really nowhere to go but up.