Accessibility links
'The Madonnas Of Echo Park': Residents, Reinvented There was a time when the Los Angeles neighborhood was known for silent films -- not drive-by shootings. In The Madonnas of Echo Park, debut novelist Brando Skyhorse revisits his old neighborhood -- and residents who still live there say his words hit home. 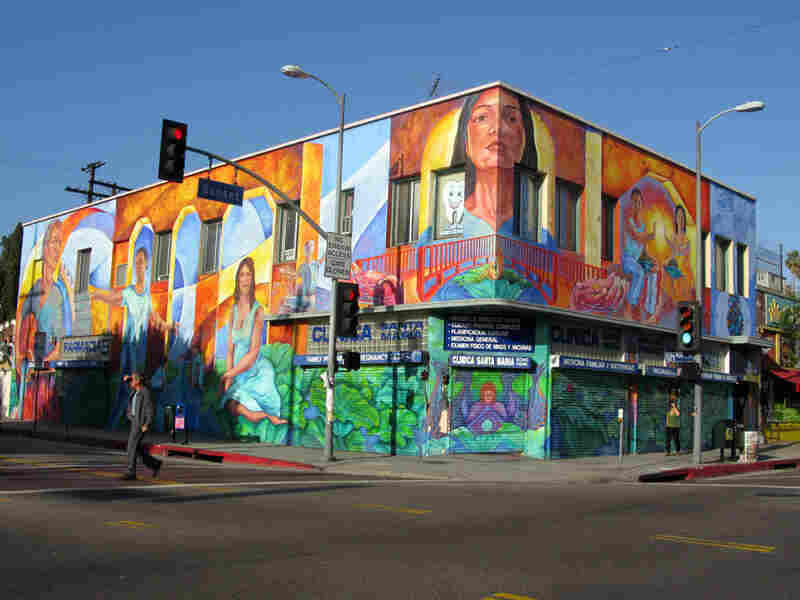 An iconic mural on Sunset Boulevard in Echo Park, L.A. -- a hilly, diverse, gentrifying neighborhood that was once a backlot for silent movies. Mandalit del Barco/NPR hide caption 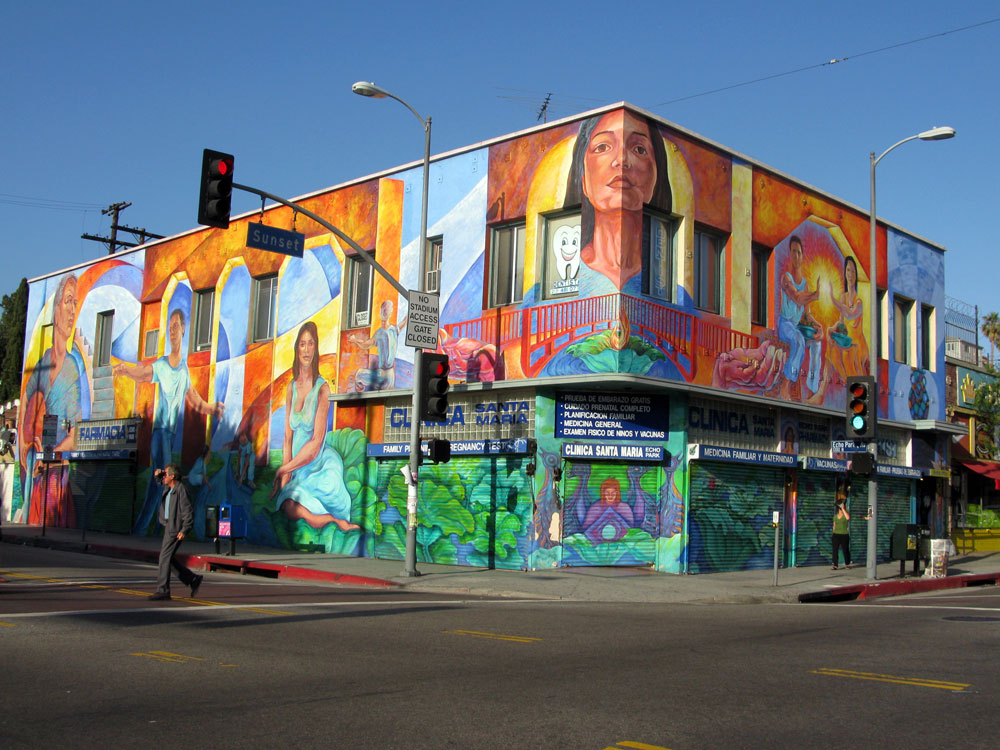 An iconic mural on Sunset Boulevard in Echo Park, L.A. -- a hilly, diverse, gentrifying neighborhood that was once a backlot for silent movies.

In the 1920s, the hilly Los Angeles neighborhood of Echo Park was known as the home of silent film. But that was before the film industry moved to nearby Hollywood and "white flight" forever changed the face of Echo Park. Writer Brando Skyhorse, 36, grew up there mostly with Vietnamese and Mexican immigrants in the 1970s and '80s when Echo Park was better known for its drive-by shootings than its cinematic history. He has channeled his memories of the neighborhood into a new novel, The Madonnas of Echo Park.

Skyhorse says he always felt like an outsider in the neighborhood. "I was definitely the nerdy kid with the book bag, with the glasses and the whole thing," Skyhorse says. "I didn't hang out with gangs, or anything. I don't even think I even considered it an option because I wasn't cool enough for that. I wasn't even worthy enough to be hassled by them. I was just totally invisible." 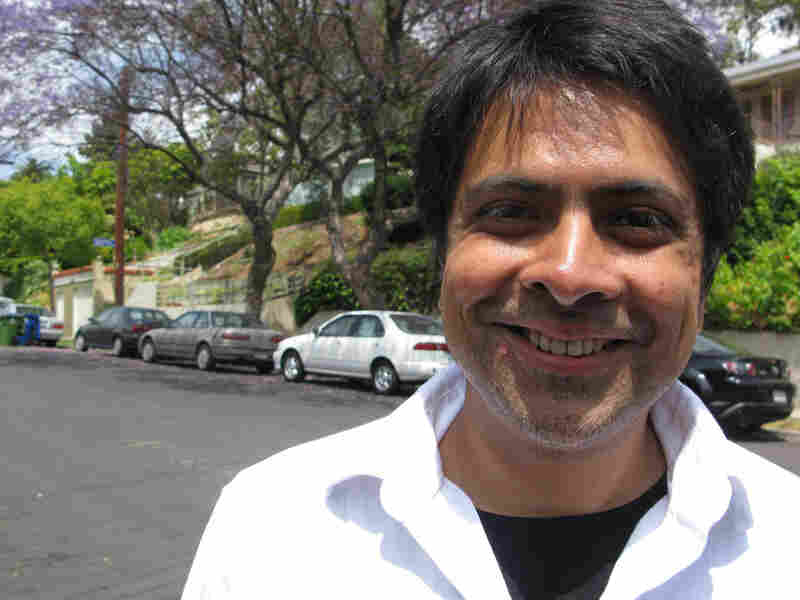 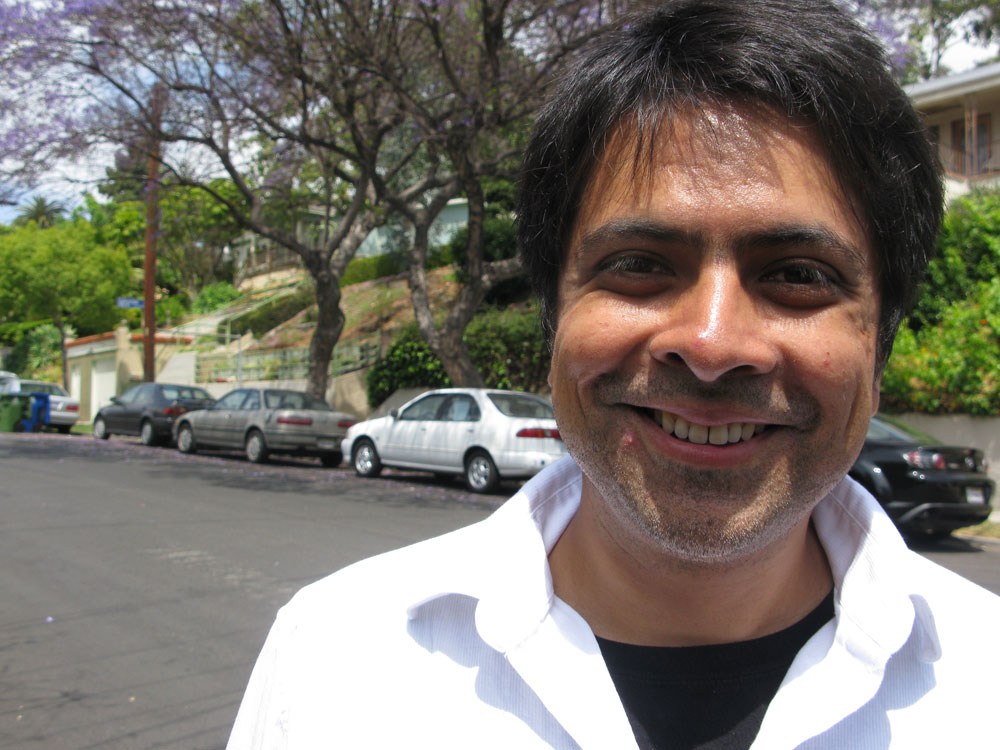 Brando Skyhorse is now writing a memoir called Things My Fathers Taught Me.

His name, he explains, "was my mother's idea. She named me Brando because of Marlon Brando's involvement in Native American activities in the early 70s -- you know, he turned down the Academy Award. She decided to name me Brando as sort of an homage to him and I realize now that she was just a really big fan of The Godfather."

Skyhorse says his late mother was very involved in the American Indian movement of the 1970s. He says his mom identified as Native American even though she'd been born Mexican American.

"She got in contact with a man who was incarcerated, and his last name was Skyhorse and I became Brando Skyhorse," he said. "My mother changed her name as well, and she became Running Deer Skyhorse."

A 'Weird Cast Of Characters'

But Skyhorse's outsider status helped him develop an observer's eye for the people he, his grandmother and his mother encountered.

"What I was exposed to was the working class element of Echo Park that you don't see in books or movies because it's not as glamorous," he recalled. "I mean ... who wants to read about someone who cleans houses all day? Well, that's, you know, interesting to me." 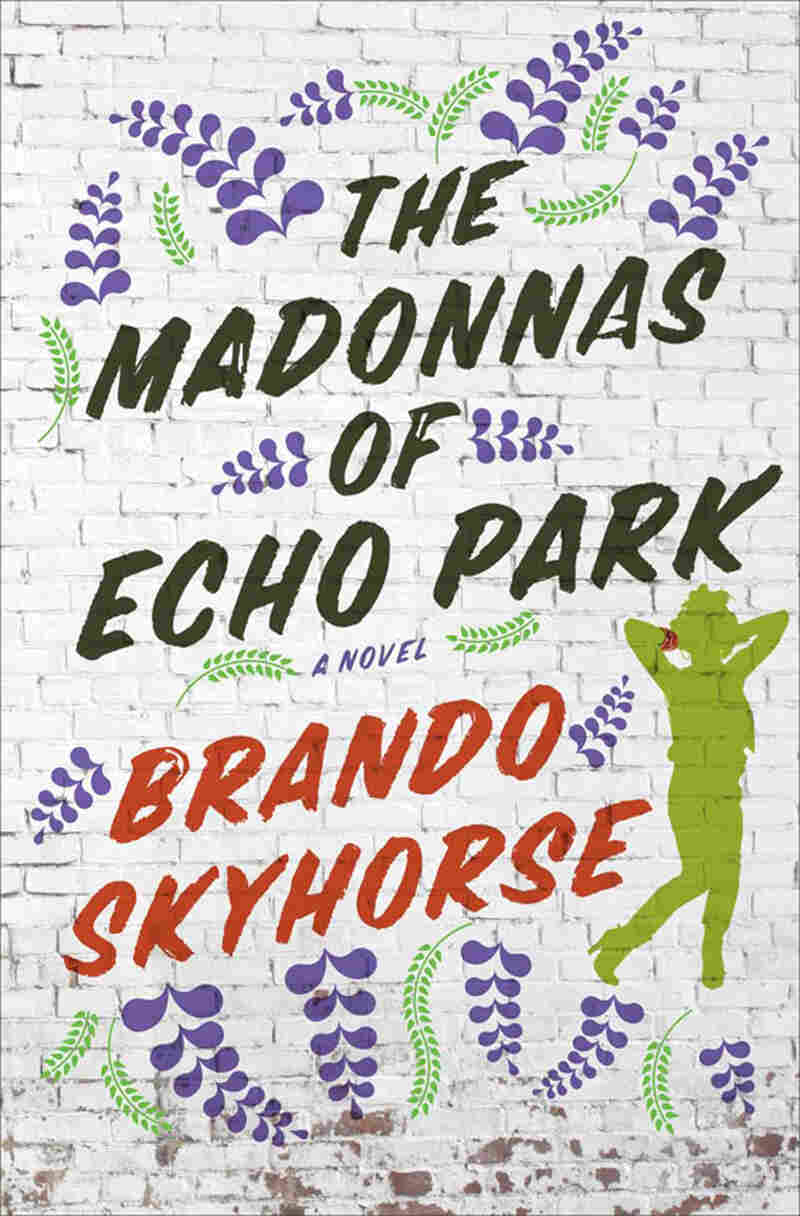 In The Madonnas of Echo Park, Skyhorse draws from his childhood memories to tell the story of Echo Park as he knew it.

"There was this sort of weird cast of characters just kind of around the neighborhood," he says. "There was this one elderly lady who used to wear a turban and this lime green coat, and she would walk up and down the neighborhood. For some reason, she always stopped at our house… because I guess my grandmother was very chatty… and she'd stop at 1 in the morning, pound on the door and say, 'This is the police, open up!'"

In Skyhorse's novel, she becomes a woman who wears many coats and who at one point encounters the Virgin Mary at a bus stop on Sunset Boulevard.

"It's left up to you to decide whether what she's doing is having a hallucination or whether she's crazy, or whether she's actually experiencing a miracle that people are just ignoring," Skyhorse says.

But there's a more visible connection between Madonna and Echo Park than that. You need only look to the artist's early music videos for songs like "Borderline" which were shot in Echo Park and in which Madonna looks like a chola, a homegirl from around the way.

"There was this discussion that there was this young attractive Mexican girl and she was a pop star. Why is she singing in English?" he remembered. "And, of course, we later found out she wasn't [from here]. But I don't think people in the neighborhood cared. It didn't matter. That was their initial impression, and there was nothing that was going to change them or dissuade them from thinking otherwise."

Skyhorse says that memory sparked his interest in revisiting the neighborhood so long after he had left it. 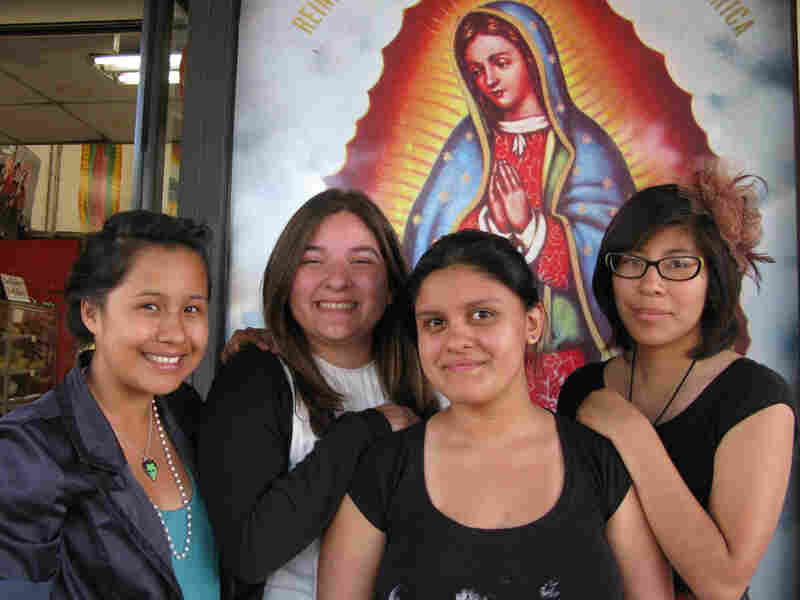 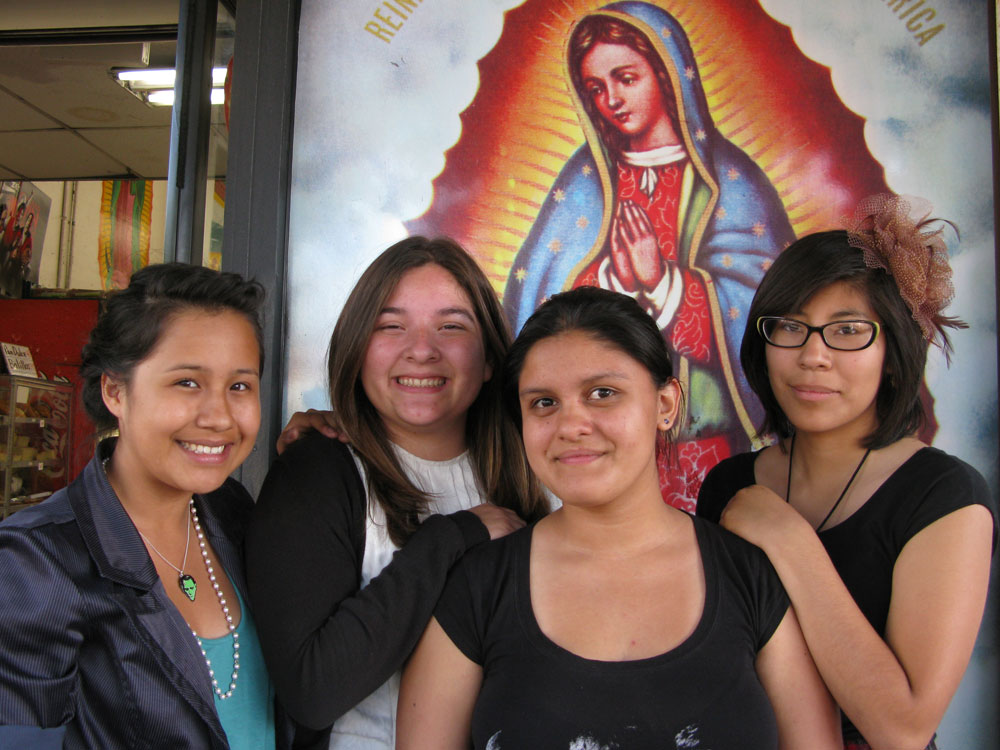 Real-life "Madonnas" of Echo Park: Sixteen-year-olds (from left) Ana Rivas, Michelle De Leon, Brenda Marones and Yesenia Pum pose at a neighborhood grocery store on Sunset Boulevard. They are all participants in the writing group 826LA.

Neighborhood Residents Read From 'The Madonnas Of Echo Park'

'Proud To Live In Echo Park'

Judging from the neighborhood's reaction, it looks like Skyhorse's novel has hit home. Sixteen-year-olds Brenda Marones, Yesenia Pum, Ana Rivas and Michelle De Leon -- all writers at the writing group 826LA -- are Echo Park residents who say Skyhorse has painted a realistic portrait of their home.

When they're asked if they consider themselves Madonnas of Echo Park, they giggle but they all agree.

"Of course, it finally feels good to be the story," De Leon says.

Rivas adds, "It kinda makes me proud to live in Echo Park."

Excerpt - 'The Madonnas Of Echo Park'

This book was written because of a twelve-year-old girl named Aurora Esperanza. In the 1980s, before I knew I was Mexican, Aurora and I were in a sixth-grade class of American-born Mexicans and first-generation Vietnamese immigrants, both groups segregating themselves into clusters on opposite sides of the room. This was an awkward arrangement for me, because though I felt I belonged to neither group, my Mexican-ness would peek out every so often from under the shadow of my stepfather's last name when I rolled a vowel too long in my mouth, or grew coarse tufts of premature facial hair. Emphasizing my "in between" status, a desk chair shortage placed me alone at an oversize table with an obstructed view of the chalkboard and my back to the American flag.

There was a constant tension in the classroom, each group suspicious of the other for conspiratorial hushes peppered with strange, foreign-sounding words that shared jokes, kept secrets, plotted insurrections. We were, however, still kids, and our hunger for the latest fads led us to break ethnic ranks and whisper in a common language of desire. We wanted Garbage Pail Kids and Pac-Man sticker trading cards, packaged with sticks of bone-hard bubble gum you could rub against the pavement to write out your name in pink zigzagged letters, a scent of hot caramelized sugar lingering on the concrete. We wanted futuristic digital watches that blinked out the time in a blood-red neon LCD phosphorescence, as bright as a sparkler strapped to your wrist.

And, of course, we wanted our MTV.

It was the rare child in Echo Park whose family could afford something as frivolous as cable television. Most families had one or two parents working a spread of jobs to support both their kids and their in-laws living under one roof. My family had a different arrangement, but I was as astonished as any of my friends would have been when one afternoon I found MTV installed on my very own television in my room, a present for getting a part-time job as an after-school ESL tutor. I sat twelve inches away from the screen, transfixed for the next seven hours, leaving it on when I went to bed with the sound off like a night-light. The next morning, I spread its legend in Ms. O'Neill's class, watching the tale jump from Mexican to Vietnamese and from boy to girl, just as difficult a bridge to cross at our ages. You could watch music on television? Yes, and every song has a story, and every story has a happy ending. You could watch Michael Jackson dance whenever you wanted? Yes, and when he walks, each step he takes lights up the sidewalk. Here was a way you could see how the music on our cheap transistor radios looked, these popular songs that throbbed with glamour, desire, and plastic gratification—a reimagining of the American Dream in bright pastels. Our parents didn't comprehend the words and were fearful that the songs they had fallen in love with growing up would be attached to a language we'd never speak and a country we'd never see.

Right before lunch, Ms. O'Neill intercepted a note I'd written to a table of Mexican boys outlining everything on MTV the night before: girls in short skirts dancing down a street in a conga line; girls with shorter skirts dressed as cheerleaders forming a bright Day-Glo pyramid; girls in bikinis dancing by an open fire hydrant. Ms. O'Neill asked how many of us thought MTV was "cool," and thanks to my classroom gospel, everyone's hand shot up. MTV was now our mutual language.

The next day, Ms. O'Neill announced plans for an "MTV Dance Party" in our classroom on the Friday before spring break. There would be those expensive Soft Batch cookies that got gummy and elastic like rubber bands if you left them out for more than a day (making them an impractical purchase for most of us because junk food had to last in our houses), two-liter bottles of Coke and Pepsi (not the generic, white-label, noncarbonated sludge with soda stamped on its side that we drank at home), and Domino's pizza. In a neighborhood where takeout was considered extravagant, this was the equivalent of a Roman bacchanal. There would also be music. Each of us was to bring in a record and play it. A number of hands shot up in confusion. What if we didn't have any records of our own? Borrow them from your brothers, sisters, or parents, Ms. O'Neill said. What if they didn't have records either? Buy a record you'd want to play. What if we can't afford to buy one? Buy a single, she suggested, they cost the same as two packs of those gross Garbage Pail sticker cards you're so fond of. All but one hand went down. Aurora Esperanza's pink fingernails sparkled as her white cotton blouse sleeve fell back down her arm and curled up against her bare shoulder.

"Will we be allowed to dance in the classroom?" she asked. "Will there be dancing?"

Dancing? The boys didn't like the sound of this. Were we expected to dance with girls? And were Mexican boys to dance with Vietnamese girls? What about Vietnamese boys—would they dance with Mexican girls? Then a more terrifying thought arose: Who would I dance with? By the end of class, I had formed a pact with two Vietnamese boys I had never spoken to before, not to dance with any girl, even if we were asked. There were many other treaties of convenience made that day, as boys and girls who had segregated themselves by race and language throughout the year became unexpected allies in an effort to outsmart our teacher, who was white. Who, we wondered, would she dance with?