Accessibility links
Inside A Psychopath's Brain: The Sentencing Debate Brian Dugan pleaded guilty last year to raping and murdering 10-year-old Jeanine Nicarico in 1983, and he was put on trial to determine whether he should be executed. Neuroscientist Kent Kiehl testified that Dugan could not help his neurological makeup. 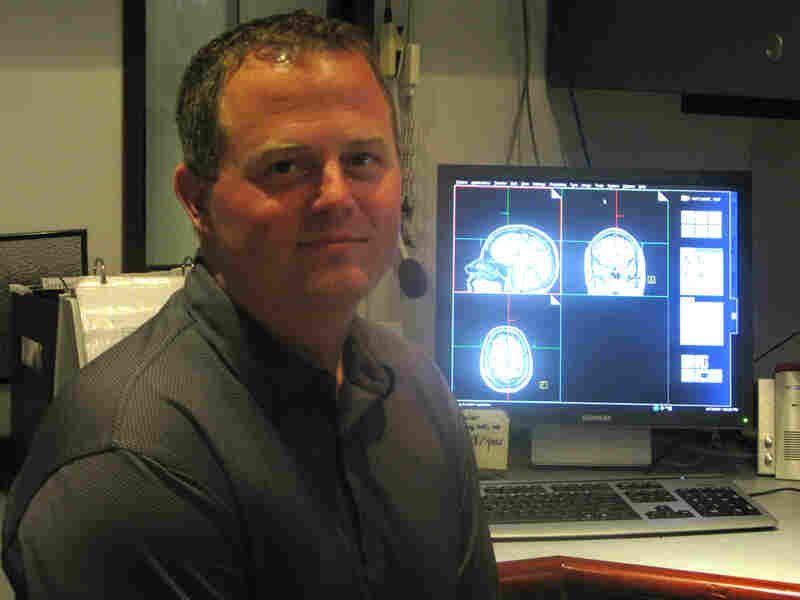 Kent Kiehl is one of the world's leading investigators of psychopathy and a professor at the University of New Mexico. Barbara Bradley Hagerty/NPR hide caption 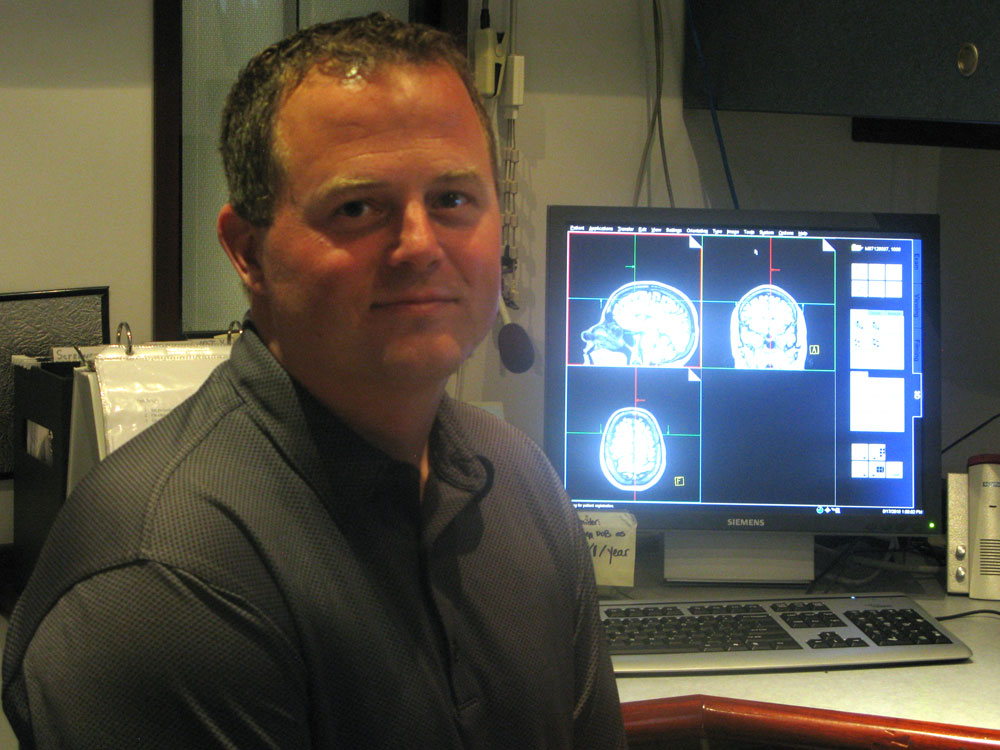 Kent Kiehl is one of the world's leading investigators of psychopathy and a professor at the University of New Mexico.

Kent Kiehl has studied hundreds of psychopaths. Kiehl is one of the world's leading investigators of psychopathy and a professor at the University of New Mexico. He says he can often see it in their eyes: There's an intensity in their stare, as if they're trying to pick up signals on how to respond. But the eyes are not an element of psychopathy, just a clue.

Officially, Kiehl scores their pathology on the Hare Psychopathy Checklist, which measures traits such as the inability to feel empathy or remorse, pathological lying, or impulsivity.

"The scores range from zero to 40," Kiehl explains in his sunny office overlooking a golf course. "The average person in the community, a male, will score about 4 or 5. Your average inmate will score about 22. An individual with psychopathy is typically described as 30 or above. Brian scored 38.5 basically. He was in the 99th percentile."

"Brian" is Brian Dugan, a man who is serving two life sentences for rape and murder in Chicago. Last July, Dugan pleaded guilty to raping and murdering 10-year-old Jeanine Nicarico in 1983, and he was put on trial to determine whether he should be executed. Kiehl was hired by the defense to do a psychiatric evaluation.

In a videotaped interview with Kiehl, Dugan describes how he only meant to rob the Nicaricos' home. But then he saw the little girl inside.

"She came to the door and ... I clicked," Dugan says in a flat, emotionless voice. "I turned into Mr. Hyde from Dr. Jekyll."

On screen, Dugan is dressed in an orange jumpsuit. He seems calm, even normal -- until he lifts his hands to take a sip of water and you see the handcuffs. Dugan is smart -- his IQ is over 140 -- but he admits he has always had shallow emotions. He tells Kiehl that in his quarter century in prison, he believes he's developed a sense of remorse.

Kiehl says he's heard all this before: All psychopaths claim they feel terrible about their crimes for the benefit of the parole board.

Kiehl says the reason people like Dugan cannot access their emotions is that their physical brains are different. And he believes he has the brain scans to prove it.

Brain Scanning In A Mobile MRI

On a crystal clear June morning at Albuquerque's Youth Diagnostic and Development Center, juveniles who have been convicted of violent offenses march by, craning their necks as a huge trailer drives through the gates. This is Kiehl's prize -- a $2 million mobile MRI provided by the Mind Research Network at the University of New Mexico. Kiehl transports the mobile MRI to maximum-security prisons around the state, and over the past few years, he has scanned the brains of more than 1,100 inmates, about 20 percent of whom are psychopaths.

For ethical reasons, Kiehl could not allow me to watch an inmate's brain being scanned, so he asked his researchers to demonstrate. 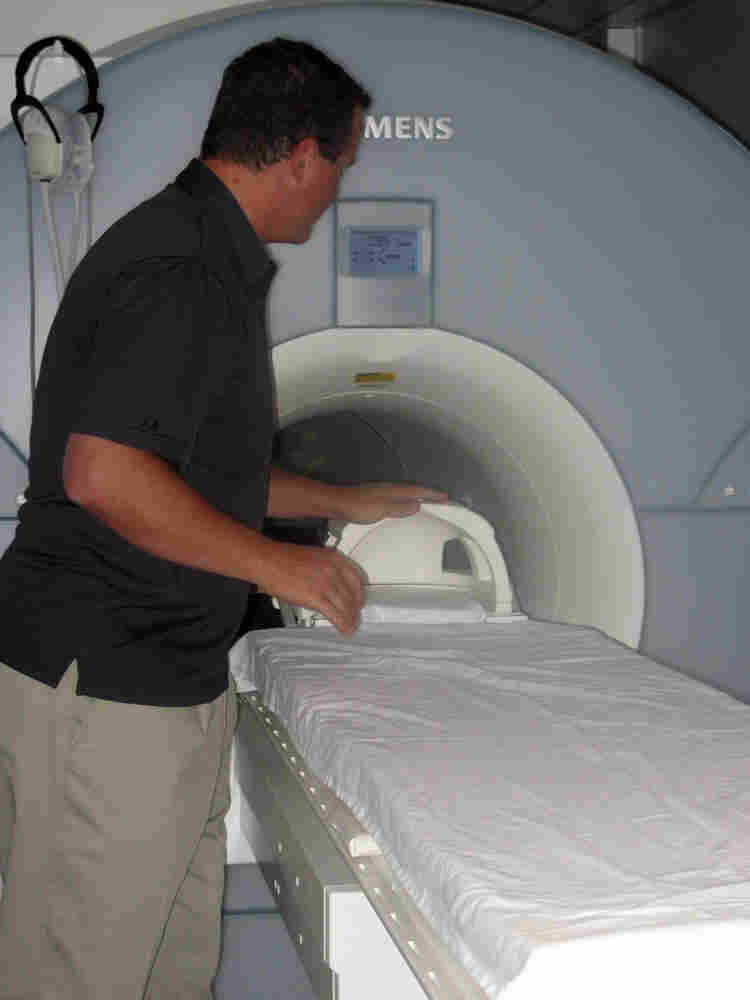 Kiehl with the brain scanner he uses at prisons. He has scanned the brains of more than 1,100 inmates, about 20 percent of whom are psychopaths. Barbara Bradley Hagerty/NPR hide caption

After a few minutes of preparation, researcher Kevin Bache settles into the brain scanner, where he can look up and see a screen. On the screen flashes three types of pictures. One kind depicts a moral violation: He sees several hooded Klansmen setting a cross on fire. Another type is emotional but morally ambiguous: a car that is on fire but you don't know why. Another type of photo is neutral: for example, students standing around a Bunsen burner.

The subjects rate whether the picture is a moral violation on a scale of 1 to 5. Kiehl says most psychopaths do not differ from normal subjects in the way they rate the photos: Both psychopaths and the average person rank the KKK with a burning cross as a moral violation. But there's a key difference: Psychopaths' brains behave differently from that of a nonpsychopathic person. When a normal person sees a morally objectionable photo, his limbic system lights up. This is what Kiehl calls the "emotional circuit," involving the orbital cortex above the eyes and the amygdala deep in the brain. But Kiehl says when psychopaths like Dugan see the KKK picture, their emotional circuit does not engage in the same way.

"We have a lot of data that shows psychopaths do tend to process this information differently," Kiehl says. "And Brian looked like he was processing it like the other individuals we've studied with psychopathy."

Kiehl says the emotional circuit may be what stops a person from breaking into that house or killing that girl. But in psychopaths like Dugan, the brakes don't work. Kiehl says psychopaths are a little like people with very low IQs who are not fully responsible for their actions. The courts treat people with low IQs differently. For example, they can't get the death penalty. 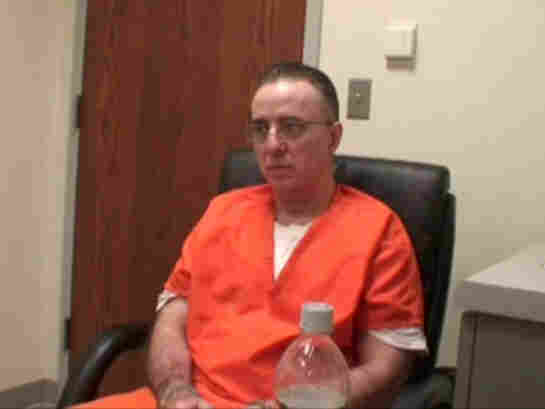 Brian Dugan pleaded guilty last year to raping and murdering 10-year-old Jeanine Nicarico in 1983, and he was put on trial to determine whether he should be executed. Neuroscientist Kent Kiehl was hired by the defense to do a psychiatric evaluation. Courtesy of Steven Greenberg hide caption 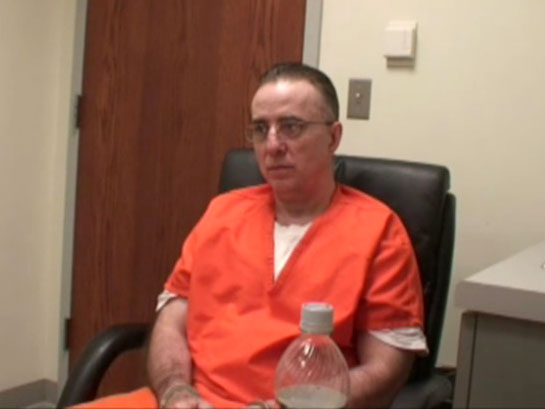 Brian Dugan pleaded guilty last year to raping and murdering 10-year-old Jeanine Nicarico in 1983, and he was put on trial to determine whether he should be executed. Neuroscientist Kent Kiehl was hired by the defense to do a psychiatric evaluation.

Kiehl Interviews Dugan About The 1983 Crime

Implications Of The Diagnosis

And that's exactly what Dugan's lawyers argued at trial last November. Attorney Steven Greenberg said that Dugan was not criminally insane. He knew right from wrong. But he was incapable of making the right choices.

This argument troubles Steven Erickson, a forensic psychologist and legal scholar at Widener University School of Law. He notes that alcoholics have brain abnormalities. Do we give them a pass if they kill someone while driving drunk?

At trial, Jonathan Brodie, a psychiatrist at NYU Medical School who was the prosecution's expert witness, went further. Even if Dugan's brain is abnormal, he testified, the brain does not dictate behavior.

"There may be many, many people who also have psychopathic tendencies and have similar scans, who don't do antisocial behavior, who don't rape and kill," Brodie says.

Moreover, Brodie told the jury, Dugan's brain scan in 2009 says nothing about what his brain was like when he killed Jeanine Nicarico.

The jury seemed to zero in on the science, asking to reread all the testimony about the neuroscience during 10 hours of deliberation. But in the end, they sentenced Dugan to death. Dugan is appealing the sentence.

In the meantime, this case signals the beginning of a revolution in the courtroom, Kiehl says.

"Neuroscience and neuroimaging is going to change the whole philosophy about how we punish and how we decide who to incapacitate and how we decide how to deal with people," he says, echoing comments of a growing number of leading scholars across the country, including Princeton and Harvard.

Just like DNA, he believes brain scans will eventually be standard fare. And that, he and others say, could upend our notions of culpability, crime and punishment.