Accessibility links
U.S. Coach A Steady Light, But Not A Shining Star It's the elimination round in the World Cup, with the U.S. pitted against Ghana. The winner of Saturday's game will move on to the quarterfinals. Many think the U.S. team has a strong chance to advance -- and credit the team's coach for its success. 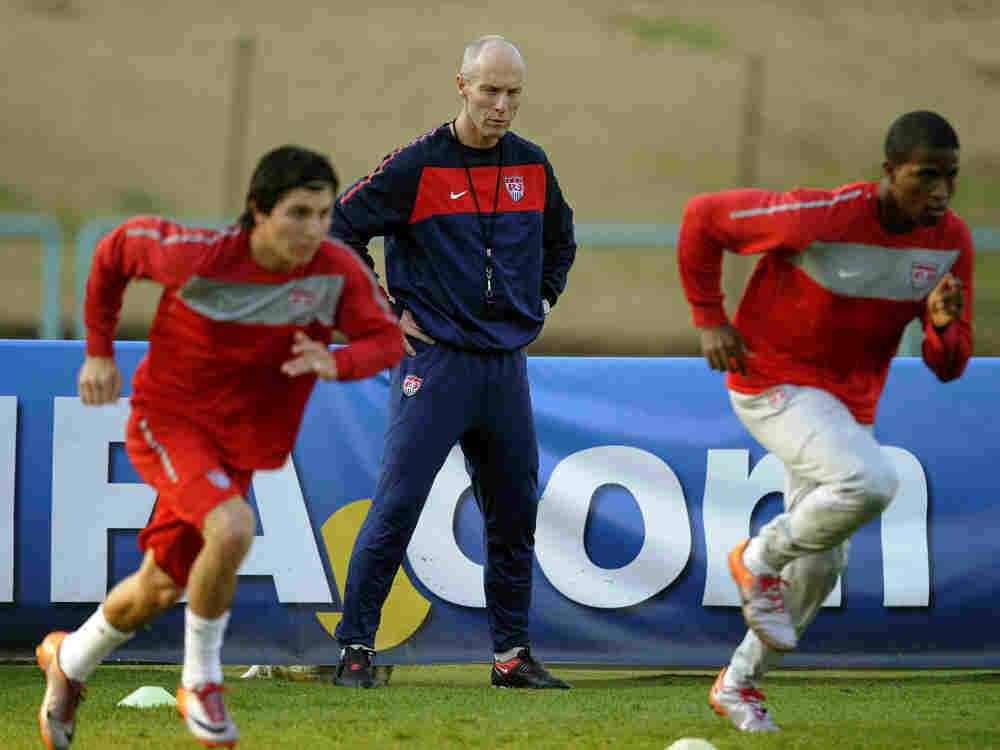 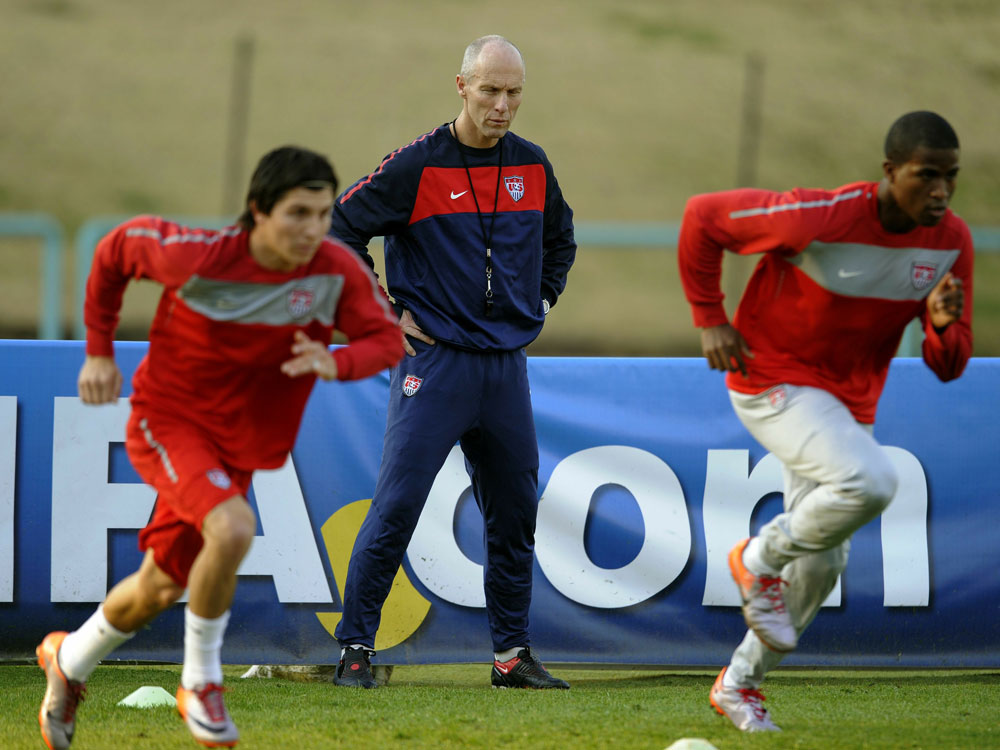 In World Cup action Saturday, the United States' men's soccer team plays Ghana in the elimination stage. Throughout the U.S. team's emotional run, their steadying influence has been coach Bob Bradley. He's a Princeton grad known for his attention to detail and expansive memory -- and the polar opposite of what you normally see on the sidelines.

With an average build, average face, no scars, no marks and no hair, Bob Bradley would be a police sketch artist's worst nightmare. Trim and neat, Bradley speaks softly and slowly. His sartorial choices run to the navy blue track suit -- and the other navy blue track suit. In a sport where national teams' coaches act and are treated like royalty, Bradley is the competent civil servant. Or, as he suggested to the press Friday, that's what he'd like us to believe.

"I don't know any of you very well, but somehow all of you think you know me," he joked with the reporters.

In truth, Bradley is detail-oriented. He never stops studying. His players joke that he has a DVD player taped to his forehead; such is his dedication to watching film. But Bradley knows how to deliver the inspirational speech:

"You speak passionately about the game and what we're trying to do," he said. "It can't be overdone, but certainly the ability to, in words, be able to put everybody on the same page and give a thought that everybody can understand and embrace -- that's pretty important." 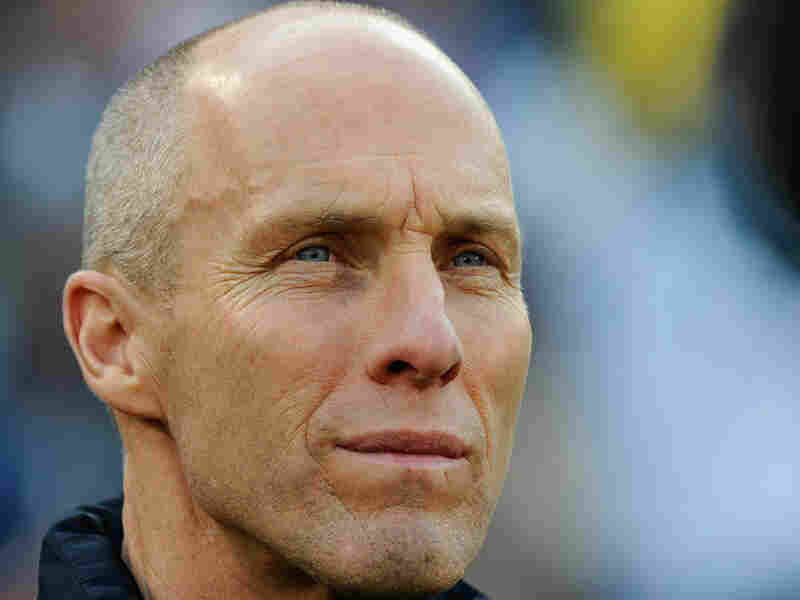 In a sport where national coaches act like royalty, Bradley is the competent civil servant. Kevork Djansezian/Getty Images hide caption 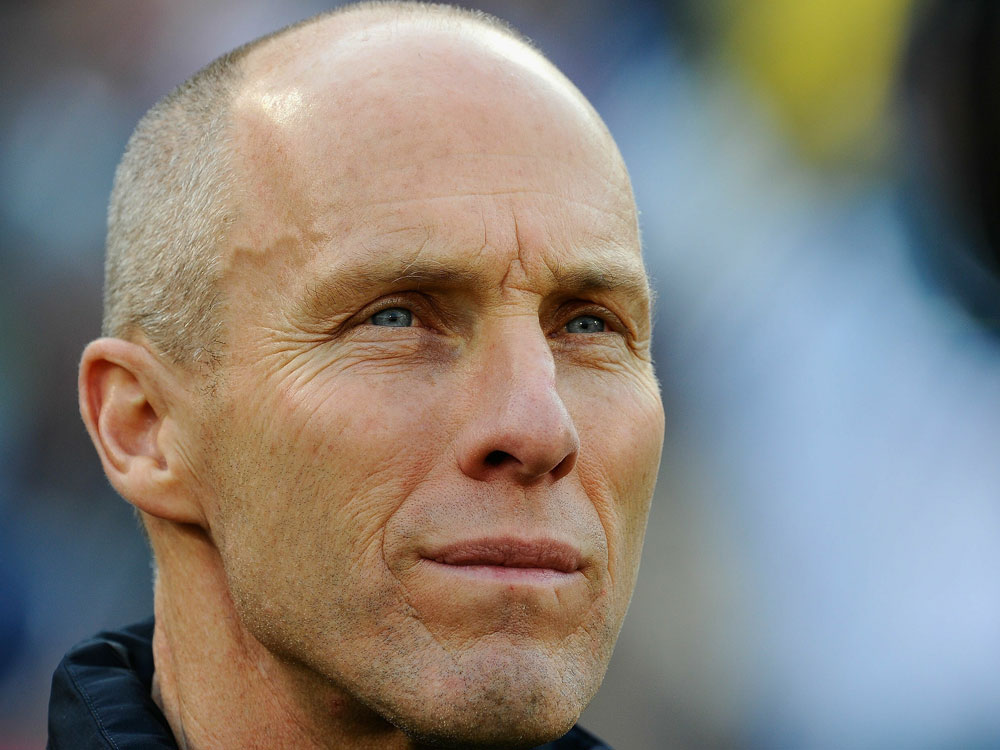 In a sport where national coaches act like royalty, Bradley is the competent civil servant.

It's clear he's not Vince Lombardi, but he's also not Bill Belichick, the coach of the New England Patriots to whom Bradley is sometimes compared. Both are serious, neither is quotable, but Bradley isn't snide and he's not controlling. Bradley empowers players. He also is thoughtful, even when his team's fundamental makeup is questioned.

Here's the translation: Unlike in American football, where a grind-it-out approach is an accepted path to championships, artistry is seen as essential in soccer. Collins' rather British suggestion is that the Americans are merely dutiful.

Bradley answered, "We think that the ability to be a team that works hard but also is smart, disciplined, creative in the right moments -- these are all things that become important."

It's not scintillating, but it's accurate and suggests how the U.S. will succeed. Hard work and teamwork, boring but true. It has worked so far; it can work against Ghana. It's not impossible to suggest that the U.S. could make the semifinals or maybe even better. If that happened, it would be the most exciting development for U.S. sports since the "Miracle on Ice" in the 1980 Winter Olympics, when the U.S. hockey team improbably beat the Soviets.

And if words like "miraculous" or "stunning" start flying around this U.S. team, they'll attach themselves to the coach we now think of as "nondescript."