Accessibility links
Sumo Wrestling Grapples With Gambling Scandal Japan's national sport, sumo wrestling, has been shaken to its core by revelations of illegal gambling and mob connections at its highest levels. The Japan Sumo Association said it may force 15 wrestlers and 14 stable masters to sit out the next tournament. 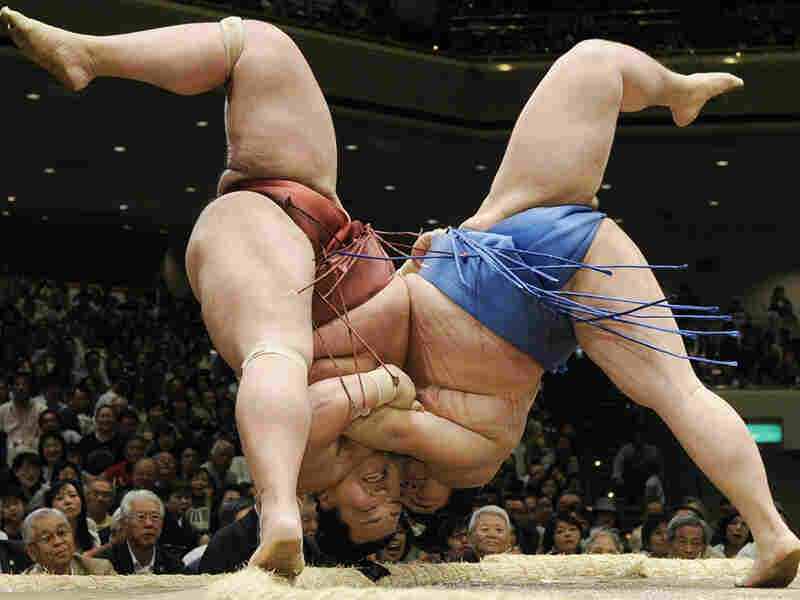 Sumo wrestlers Tosayutaka (right) and Toyohibiki fall headfirst to the dirt after Tosayutaka threw his opponent during their bout in the grand summer tournament at Tokyo's Ryogoku Kokugikan sumo arena in May. Naohiko Hatta/AP Photo/Kyodo News hide caption 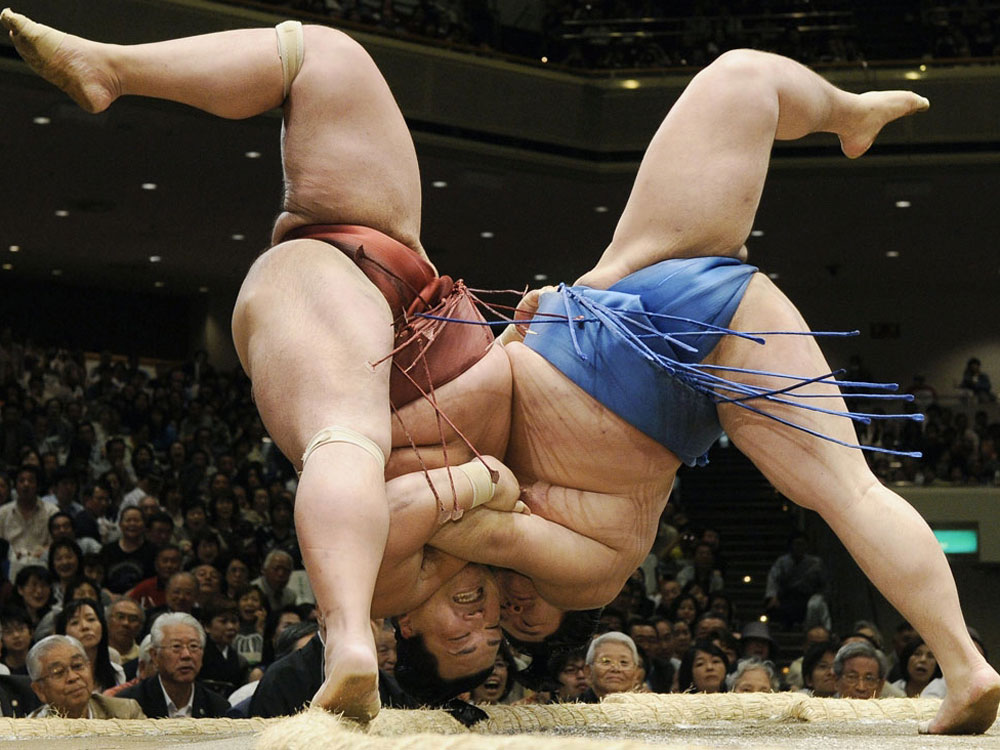 Sumo wrestlers Tosayutaka (right) and Toyohibiki fall headfirst to the dirt after Tosayutaka threw his opponent during their bout in the grand summer tournament at Tokyo's Ryogoku Kokugikan sumo arena in May.

Japan's national sport, sumo wrestling, has long been sullied by episodes of violent hazing, drug use, a shortage of local recruits and sagging popularity.

But Japanese wrestling has been shaken to its core by revelations of illegal gambling and mob connections at sumo's highest levels.

On Monday, the Japan Sumo Association said it may force 15 wrestlers and 14 stable masters to sit out the next tournament, and a handful are facing expulsion over allegations that they bet on baseball games. Gambling is seen as a breach of discipline and not in keeping with stringent ethical standards sumo wrestlers are expected to observe.

I do think the public holds them to a higher standard. ... I mean, they do look like throwbacks to the past, and so they are sort of modern representations of traditional mores and virtues.

"To wager on baseball, you need to know the game well, and you need plenty of cash. That excludes junior wrestlers, because they don't earn salaries. So only the most talented, the most popular wrestlers seen on TV are able to gamble on baseball. That's what has been so shocking," Watanabe says.

Topknots, Wagers And The Mob

The details of the scandal involve a hairdresser who served as courier between wrestlers and the Japanese mob, known as the yakuza, to place the bets. Hairdressers, who create the perfumed and oiled topknots that wrestlers wear, are a constant presence at sumo stables.

In the past few years, scandal has become as much a part of sumo as loincloths and bulk-up diets. The legendary sport seemed to start its tailspin back in 2007, when a teenage recruit was killed during a violent training session. Later, four wrestlers were fired for marijuana use.

And then, this year, one of the two reigning champions was forced to retire after a series of problems, ending with a drunken brawl. That one-time sumo star, Asashoryu, was Mongolian.

The episode seemed to reinforce perceptions that the "globalization" of sumo was bringing down the sport. Sumo has come to be dominated by men from developing countries, those willing to endure the grueling regimen for a chance to become champions, and multimillionaires.

Sumo has always stood for more than just sport. It dates back at least 1,500 years and is part of the founding myth of Japan itself -- legend holds that the Japanese won their islands in a sumo bout of the gods.

"I do think the public holds them to a higher standard," Kingston says. "If you look at them around streets with their flowing yukata [robes] on their wooden geta [footwear], and topknots, I mean, they do look like throwbacks to the past, and so they are sort of modern representations of traditional mores and virtues," Kingston says.

Veteran sumo commentator Doreen Simmons says she think this latest scandal represents a huge crisis for the sport. This time, she says, there aren't any foreign suspects to blame.

"All the other problems that have surfaced recently were one-offs that could be treated as individual problems. This is the bedrock; this is the whole sumo association. Not everybody, by any means, but an awful lot of people, including major stable masters, some of the most successful men," Simmons says.

One of the more outrageous allegations is that yakuza foot soldiers are able to get coveted front-row seats to sumo tournaments and literally communicate with pals in prison thanks to national TV, says Watanabe, of Japan's TBS TV network.

"Convicts are allowed to watch sumo live on TV. The reason why mafioso want to sit close to the ring is to get on TV. Then their boss in prison can see that they're doing well, and they can demonstrate their loyalty," Watanabe says.

Simmons says sumo and the yakuza have a long and complicated history.

"As long as I've followed sumo, which is 35 years or so, there's been this fight against the yakuza, the gangsters, established crime," Simmons says. "But of course the reason there is a fight is because there's a lot of money around. And some of the oyakata, the famous wrestlers, are involved -- always have been," Simmons says.

Rumors of match-fixing have swirled around sumo for years. The secretive and insular sumo association has never investigated these allegations.

Kingston, of Temple University, says the latest scandal is the most damning circumstantial evidence yet that organized crime members have the leverage to force wrestlers to throw matches.

"Mob-linked gambling on baseball, which is illegal, is involving many people in the sumo world. So the fact that the yakuza and the sumo sit uncomfortably close together in the media, I think, is raising suspicions," Kingston says.

While next month's tournament will proceed without some of its most talented wrestlers, the audience may be drastically reduced.

Japan's NHK state broadcasting network has been deluged with angry letters from citizens, demanding that it pull the plug on sumo programming.