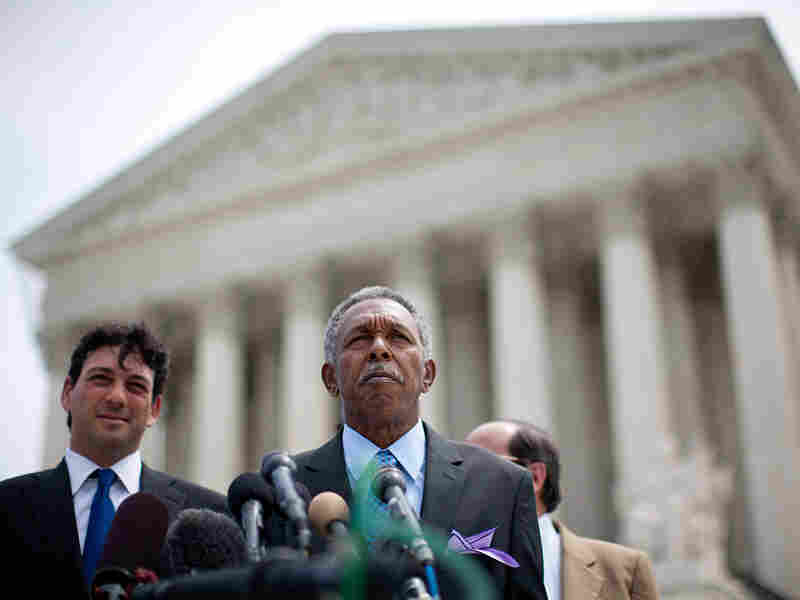 Otis McDonald (C), lead plaintiff, and his legal team speak to reporters after a ruling in their case seeking to overturn Chicago's ban on handguns. Brendan Hoffman/Getty Images hide caption 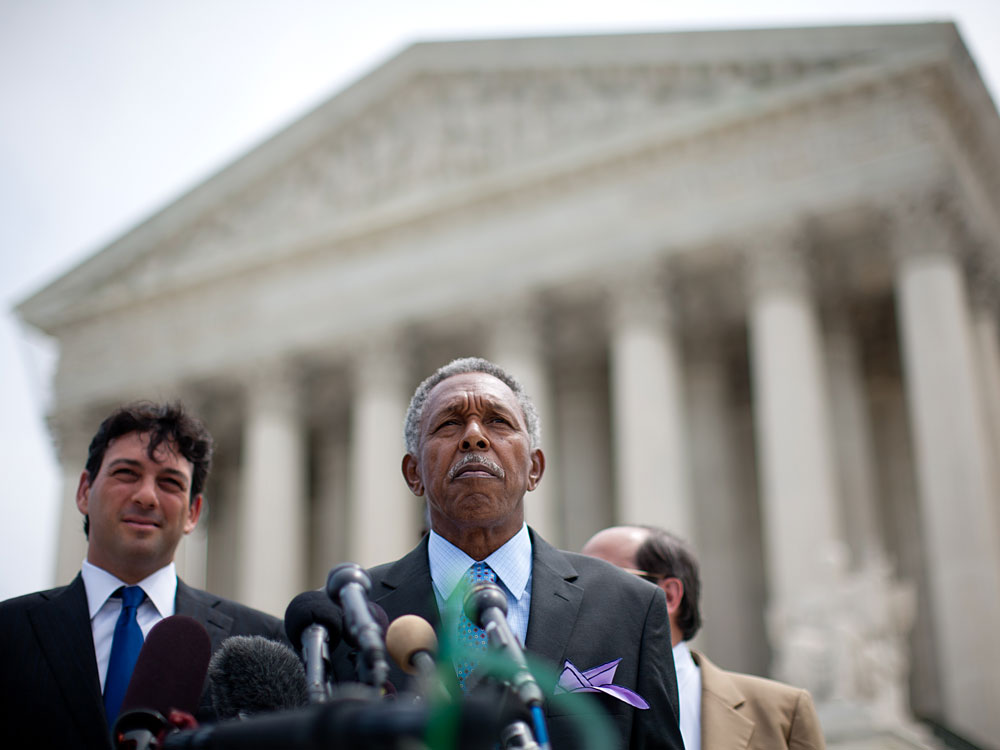 Otis McDonald (C), lead plaintiff, and his legal team speak to reporters after a ruling in their case seeking to overturn Chicago's ban on handguns.

NPR's Nina Totenberg Talks About The Ruling On Gun Ownership

The Supreme Court held Monday that Americans have the right to own a gun for self-defense anywhere they live, expanding the conservative court's embrace of gun rights since John Roberts became chief justice.

By a 5-4 vote, the justices cast doubt on handgun bans in the Chicago area, but signaled that some limitations on the Constitution's "right to keep and bear arms" could survive legal challenges.

In the guns case, Justice Samuel Alito said for the court that the Second Amendment right "applies equally to the federal government and the states."

The court was split along familiar ideological lines, with five conservative-moderate justices in favor of gun rights and four liberals opposed. Roberts voted with the majority.

Monday's decision did not explicitly strike down the Chicago-area laws. Instead, it ordered a federal appeals court to reconsider its ruling. But it left little doubt that the statutes eventually would fall.

Officials in Chicago said they were ready to move forward with a new city ordinance in light of the Supreme Court ruling -- and gun proponents said they will continue to fight any new regulations.

It's a decision that Chicago Mayor Richard Daley, a strong proponent of gun control, had anticipated earlier:

"We will of course, abide by the court rulings -- that's a key -- but also continue to look for new ways to adhere to our basis commitment to keep guns off our streets and prevent gun violence," Daley said.

The ruling that the Constitution puts limits on handgun restrictions that states and local governments can impose was a blow to Chicago's nearly 30-year ban on handguns.

Colleen Lawson, one of the plaintiffs who challenged Chicago's law, said she was grateful for the ruling. "To those who would prey on the citizens of Chicago, to the criminals -- I would like to say the Chicago crime buffet is over," Lawson said. "We are not prey."

Chicago officials plan to present a new ordinance regulating handgun ownership later this week. Lawson, the Illinois Rifle Association and the others involved in this case say they're prepared to challenge any new gun measures as well.

While gun rights activists cheered the ruling, they're encouraging people not to run out and try to buy guns yet. Richard Pearson, who heads the Illinois Rifle Association, says residents of Chicago should wait until new laws are on the books to buy guns.

Chicago passed its handgun ban in the early 1980s with the idea that fewer guns would help keep residents safer.

Pearson says owning a gun is what keeps residents safe -- and that statistics show that gun ownership is safer than playing golf or swimming. "I think we spend too much time catering to the criminal element and not enough time working with the law-abiding citizens," Pearson said.

Justices John Paul Stevens and Stephen Breyer, joined by Justices Ruth Bader Ginsburg and Sonia Sotomayor, each wrote a dissent. Stevens said that unlike the Washington case, Monday's decision "could prove far more destructive -- quite literally -- to our nation's communities and to our constitutional structure."

The ruling seemed unlikely to resolve questions and ongoing legal challenges about precisely what sort of gun control laws are permissible.

With reporting from NPR's Cheryl Corley, Tony Arnold of Chicago Public Radio and The Associated Press