Accessibility links
U.S. Toils To Build Police Force In Kandahar The U.S. operation in Afghanistan's Kandahar province includes training the Afghan police, which is plagued by illiteracy, high dropout rates and drug use. A quality, independent police force is essential if Afghanistan is to protect its own people. But creating one could take years.

A crucial part of the U.S.-led operation to take back southern Afghanistan's Kandahar province includes training the Afghan police, a force that is very much a work in progress. Its ranks suffer from lack of education, high dropout rates and drug use.

Thousands of American and allied troops are deploying to Kandahar this summer and fall in an effort to counter the Taliban. U.S. officials say the creation of a quality police force must happen if Afghanistan is to protect its own people.

But it could be years before Afghan police are able to operate on their own.

It's nothing that's going to happen overnight. It's like taking a newborn child, you have to teach it all these new lessons, how to talk, how to walk. So it's a slow process.

A one-time ironworker from Chicago, Army Sgt. Bradley Swope is a tall, lean soldier -- a military policeman -- who has been training the Afghan police for nearly a year. He has no illusions about the challenges.

"It's nothing that's going to happen overnight. It's like taking a newborn child, you have to teach it all these new lessons, how to talk, how to walk. So it's a slow process," he says.

The police station in downtown Kandahar is two small, whitewashed buildings protected by high concrete blast walls. On one side: small shops and the endless racket of motorcycles and cars. On the other side: a small graveyard.

Swope, the American MPs squad leader, instructs an Afghan police captain to get his men to clean up the station -- picking up cigarette butts and other debris.

Illiteracy, Corruption And Lack Of Pay

The training is slow, in part, because nearly three-quarters of Afghans are illiterate. That's one of the reasons the police commander in Kandahar city, Sayyed Gulab Shah, thinks it will take years -- seven or eight -- before the Afghans can operate on their own.

Shah, a squat man just past 50, sits on a faded brown couch in his office at the station. There's a vase of plastic flowers on a bookshelf, next to a large portrait of Afghan President Hamid Karzai. A toy tank sits on his desk.

Shah is a warrior. He fought the Taliban for years. Now, the Taliban has returned, carrying out bombings and assassinations. But some of the problems in Kandahar are common crimes -- the sort that happen when there are no police.

Maj. Omar Lomis is operations officer for the American MPs.

"This is a city itself just like New York City or Dallas, Texas. It's got crime. Not everything in here is Taliban," Lomis says.

The MPs have helped boost the Afghan police to 1,000 officers, but Lomis says they need far more -- 3,000 at a bare-bones minimum.

To make that happen, the Pentagon this summer is sending hundreds more MPs to patrol with the new Afghan police recruits.

There is no end of challenges to creating more Afghan cops. There is corruption -- police shaking down residents for money. Another problem is that more than half the Kandahar police walked off the job in the past two years.

Shah, the police commander, says the main reason for the retention problem is low pay.

"They cannot support their family, so they want to find a better job. And some of them are under the intimidation of the Taliban," he says.

But Shah says there is something far more troubling than the quality of his force. He says most criminals arrested by his police are often released by politicians or judges, because of family connections or corruption.

They cannot support their family, so they want to find a better job. And some of them are under the intimidation of the Taliban.

Sayyed Gulab Shah, Kandahar police commander, on why so many police walk off the job

"They think that, 'Today we're being arrested, tomorrow we will be released,'" he says.

The Americans, however, say they make sure that some of those who are arrested are not released, such as Taliban bomb makers. Those cases go through a separate American judicial system.

Police are the most important security force in a counterinsurgency effort, such as the one the U.S. is mounting in Kandahar. Police are closer to the people, springing from the very neighborhoods they're sworn to protect.

But it doesn't always work that way.

On a recent patrol in the city, the U.S. Army MPs stopped at a police checkpoint on the side of the road, picking up rolls of barbed wire and heaving them on top of the trucks.

The Afghan police tried to inspect passing cars, but there was a language barrier. Rather than being locals, many of the Afghan police come from hundreds of miles away. They speak Dari, in a city where the language is Pashto.

There is another problem: drug use. A police chief was recently fired for using drugs. The American MPs' translator for the past year, a man named Mir, says he has witnessed hashish smoking among the Afghan national police -- not by all of them, but some of them, he says.

The Army MPs take that all in stride. 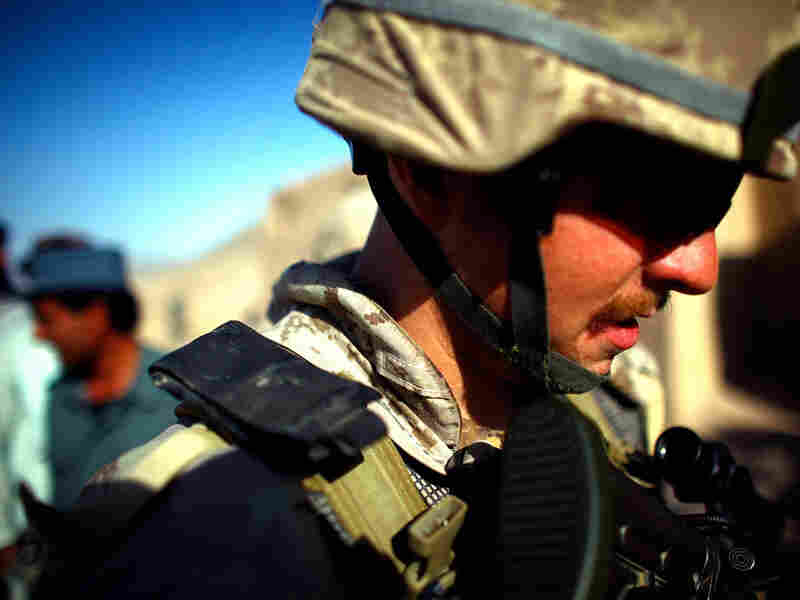 Canadian army Lt. Alex Lomasney talks to villagers on the edge of Kandahar, near the Arghandab Valley. "One day soon we'll just be able to hand it over and the foreign forces can leave and it will be fully Afghan," Lomasney says. David Gilkey/NPR hide caption 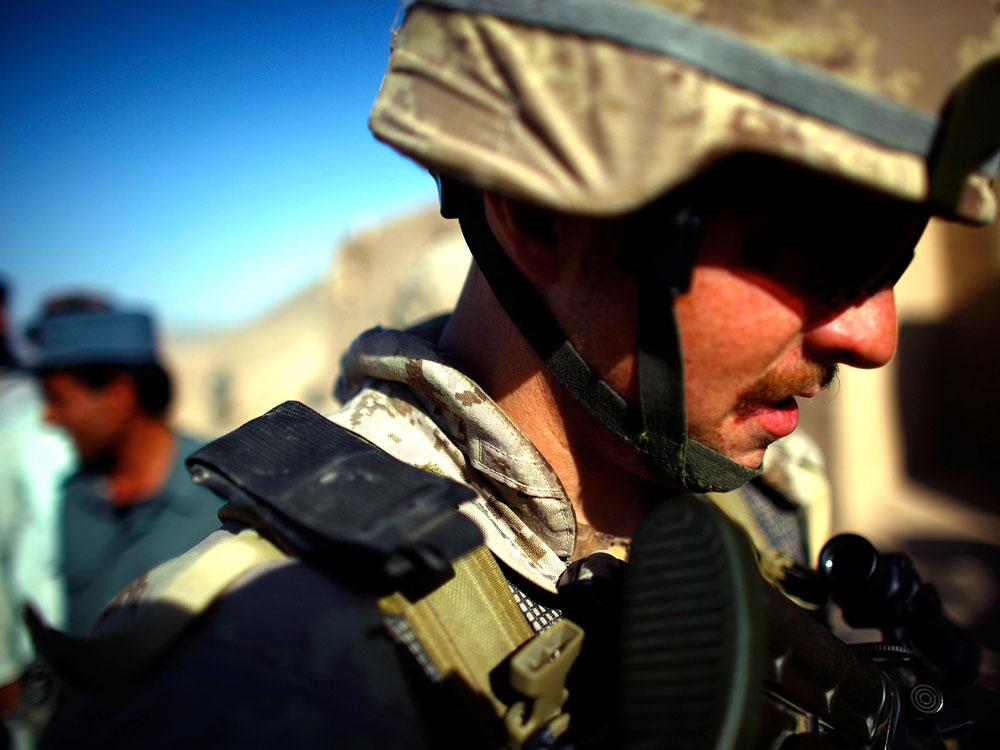 Canadian army Lt. Alex Lomasney talks to villagers on the edge of Kandahar, near the Arghandab Valley. "One day soon we'll just be able to hand it over and the foreign forces can leave and it will be fully Afghan," Lomasney says.

"Drug use is a cultural thing. It's going to be hard to completely get rid of it," says Lomis, the operations officer.

"If we find that the ANP [Afghan national police] are using, then that's grounds to kick them out. I know at the training academies they give urinalysis, and if you come up hot, you're not going through training," he says.

Goal Of A Fully Afghan Force

Near the end of a recent patrol, Swope assembled his MPs on the outer edge of Kandahar city.

They were patrolling a neighborhood of mud-walled compounds, rising up a rocky hillside. Taking part were Afghan police and soldiers from the Canadian army.

One of the Canadians, Lt. Alex Lomasney, sat cross-legged on a grassy patch with an Afghan truck driver, who complained about the lack of security. Each morning, the man said he scans the dirt walkway in front of his compound for fresh digging or a slight mound -- anything that might signal a hidden bomb.

Sitting nearby were several Afghan police. One smoked a cigarette; others chatted or gazed off in the distance.

A NATO trainer later complained that they should have been patrolling.

Lomasney, though, is more upbeat.

"One day soon we'll just be able to hand it over and the foreign forces can leave and it will be fully Afghan," Lomasney says.

That's the plan. But that day won't come anytime soon.