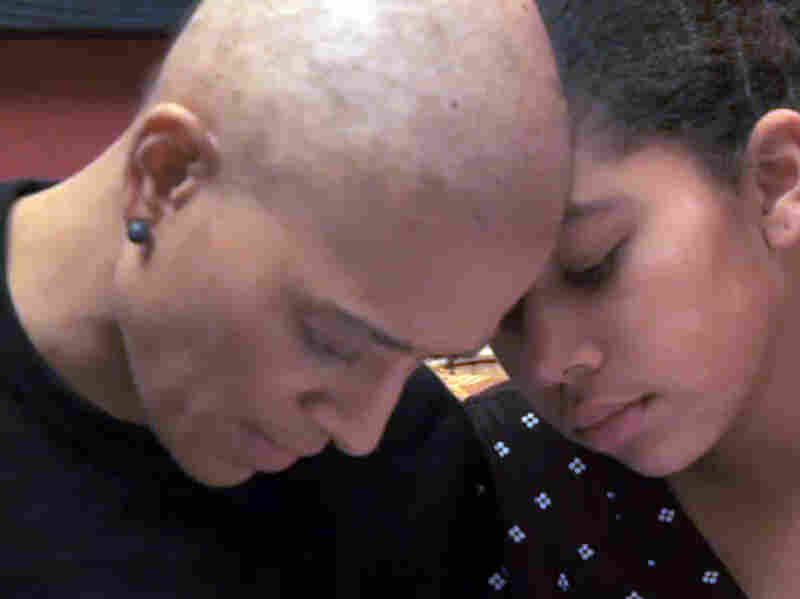 When Jennifer Jones Austin was unable to find a bone marrow donor match, her family appealed to the public in ads shown in churches and on the Internet. Courtesy of The ICLA Da Silva Foundation hide caption

Bone marrow transplants are often the only treatment for blood-related cancers. The treatment, however, is dependent on the patient finding a donor who shares a similar genetic makeup. In most cases, that means the match is found in someone of the same race. But the black community has a particularly tough time attracting donors.

Shawn Austin sits in the living room of his home in Brooklyn.

"She's beautiful in that picture," Austin says as he grabs a photo of his wife from on top of the piano. The picture shows an African-American woman with long straight hair, a slender build, and a mischievous smile. That was Shawn's 42-year-old wife last year. In September, Jennifer Jones Austin was diagnosed with leukemia.

"You know my immediate thought was, I am going to lose my wife to cancer," Austin says. But he learned that there was one way to save his wife's life. Through a bone marrow transplant. The transplant would use the bone marrow cells of another person to replace Jennifer's cells.

Siblings have a 25 percent chance of being a match. But Jennifer's siblings weren't a match. So the family turned to the National Marrow Donor Program with hope and optimism.

Because of their mixed heritage and lower donation rates, African Americans have a smaller pool to draw matches from than white donor seekers. However, unlike solid organ transplants, there is no waiting list for bone marrow and cord blood transplants because patients aren't competing for the same donor.

"We thought it was no big deal. It's a database of eight million plus -- someone's gotta be a match. Well, when you're of color it's not that easy," says Austin.

In 2008, 40 percent of caucasians who didn't have a bone marrow match in their own family were able to receive a transplant through the national marrow donor program. The rate for African-Americans was 15 percent.

One reason for the difference is that fewer black people sign up to be donors than white people.

But there is another barrier. Experts say that African-American patients have more rare genetic makeups than caucasians because their genes tend to be more racially mixed. This makes finding a precise match that much tougher.

When Jennifer Jones Austin couldn't find a match, her family appealed to the public in ads shown in black churches and on the Internet.

In the video, Jones Austin shares her story, "I and my family and my friends have been frantically searching for the last little while for a donor," she says.

Experts say despite emotional pleas, blacks are resistant to donating and 38-year-old Akiim DeShay says he can relate.

"That's a very, very deep issue in the black community and it really stems from having a mistrust of what a lot of African Americans consider the 'system,'" DeShay says.

Of the millions of donors registered with the National Marrow Donor Program, about 8 percent are black and 75 percent are white. Because bone marrow compatibility is closely linked with race, that means blacks have a much smaller pool of potential donors.

But even if that pool were much bigger, it would still be harder for African-American people to find compatible donors than whites. That's because they tend to have a rarer genetic tissue type than whites.

"In African-Americans there are combinations of genetic identity molecules that don't commonly occur in more homogenous populations," Navarro says. "So that creates more genetic diversity and a more difficult match."

But when it comes to bone marrow, genetic diversity makes it that much tougher to find someone who is equally as unique as you are.

DeShay says given the way blacks have historically been treated by the health system it's no wonder they aren't rushing to do cheek swabs to have part of their DNA registered with the National Marrow Donor Program.

"I recall I had the same feelings, so I never ever ever gave blood," DeShay says.

But his own attitude changed in 2003 when he learned he needed a bone marrow donor or he would die.

"My thing was, first of all, I don't know these people. They are going to be sticking me with needles. I just can't trust someone to stick me with needles," DeShay says.

His sister's marrow saved his life. Now he spends his time recruiting other African-Americans to sign up through his website blackbonemarrow.com.

In addition to the mistrust, many fear that being a donor is painful. But thanks to advances in science donating can be relatively pain-free.

But with no match in the registry, Shawn Austin's wife, Jennifer, was running out of time, so doctors turned to a less desirable option.

"Essentially I received cord blood from a newborn baby," she says.

So, cells from umbilical cord that matched Jennifer's genetic makeup were used to save her life, an option with longer recovery times and sometimes the fear that cell supply might not be enough.

"There have been days I've stayed on this couch from 9 o' clock in the morning until 5 o' clock," Jennifer says, as she sits on her beige sofa.

Today, her face looks nothing like the photo on the piano. No longer do her long locks frame her face. Instead, just a few strands of tiny hair peek out from her bald head.

"While I may be cured of leukemia, it is a life-long treatment process. I've got to find that place I can be forward-thinking but all the while be mindful of -- that nothing's promised.

Even though Jennifer wasn't able to find a bone marrow donor and had to settle for cord blood, she says she's already heard that of the 12,000 or so donors -- mostly blacks -- who signed up trying to save her life, there ended up being matches for other African-Americans who needed transplants.

That, she says, makes her feel there was a higher purpose to her illness.

This report was produced in collaboration with WNYC.