Accessibility links
Eugene Boudin: The Man Who Inspired Monet The pioneering impressionist's career truly began when, as a young man, he traveled to Honfleur — a small village in Normandy — and began trying to capture the effect of natural light with his paintbrush. In the first of three stories, NPR's Susan Stamberg travels to France to explore Honfleur and learn more about Eugene Boudin, the man who convinced Monet to paint in the open air.

In Normandy, the small and charming port town of Honfleur has everything: an iconic old bell tower that provides an excited peal for weddings; an ancient wooden church across the street, where the organist does better than "Here Comes the Bride" to mark the occasion; and -- along the little cobblestone streets, hurdy-gurdy players providing more secular music for the hordes of camera-toting tourists. 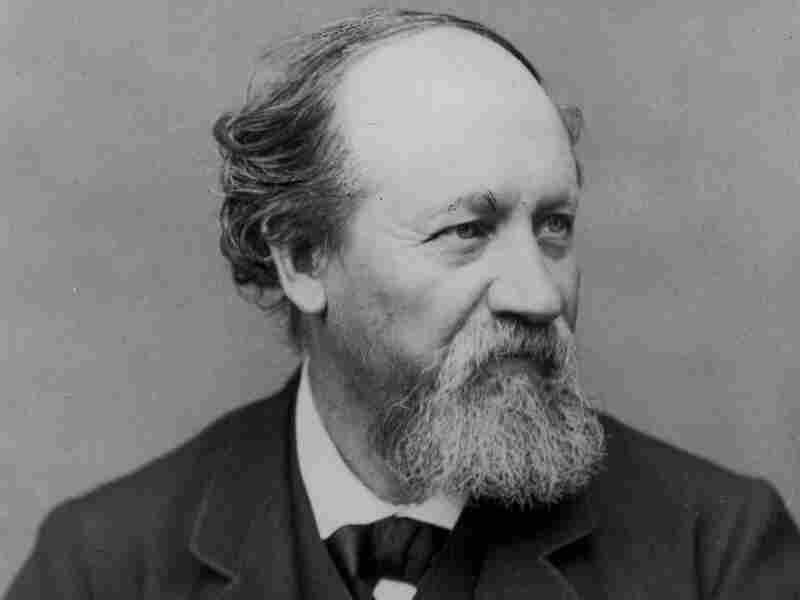 Eugene Boudin, who coaxed Claude Monet to the seaside and inspired him to paint in the open air, ran a framing shop before taking up painting himself. Pierre Petit/Archives Larousse, Paris, France/ Giraudon/ Bridgeman Art Library hide caption 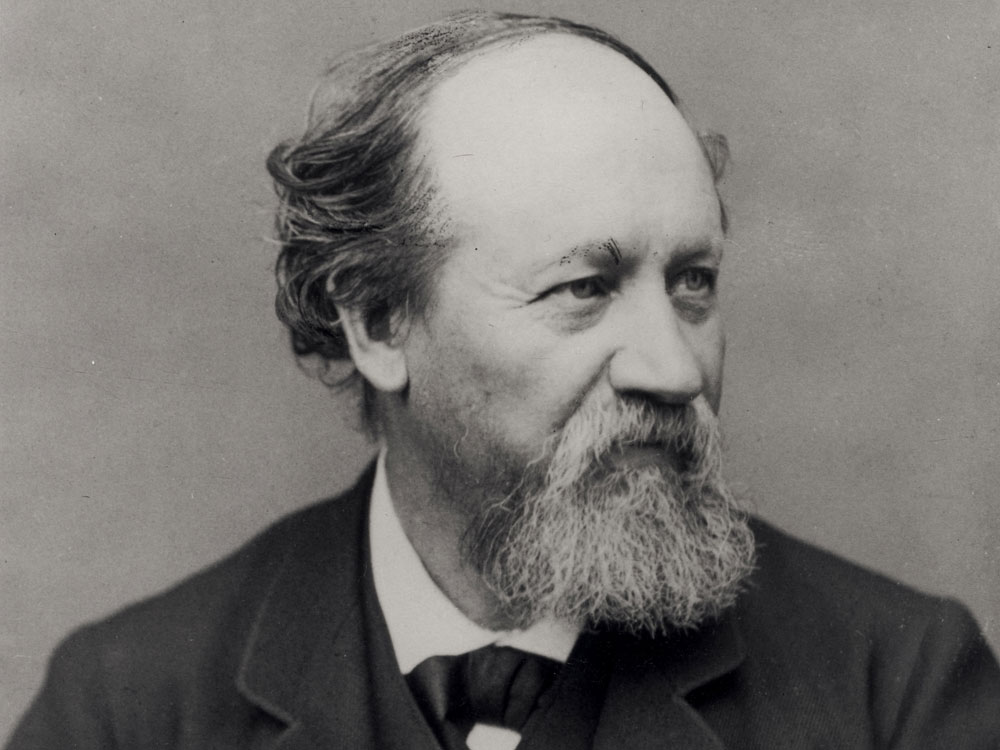 Eugene Boudin, who coaxed Claude Monet to the seaside and inspired him to paint in the open air, ran a framing shop before taking up painting himself.

Away from the crowds, Honfleur also has an art museum with some notable samples of impressionism in Normandy. The Boudin Museum was founded by a local boy who made good: Eugene Boudin, a forerunner of impressionism who's not that well-known, either in the U.S. or France. But his influence is visible in every collection of 19th-century French art.

Boudin didn't start out to be a painter. His father ran a ferryboat between Honfleur and Le Havre, the big English Channel port, and Boudin worked on the boat as a child.

"And one day he fell overboard and was caught by one seaman," says Bridget Mueller, who guides visitors around Normandy. "Otherwise he would have drowned -- so his mother said, 'You're not going on this ship again.' "

Instead, young Eugene went to school. A teacher spotted artistic talent, and from then on, Boudin went to sea via the canvases he painted. Mueller says there's hidden proof of the artist's seamanship: a notation on the back of every painting, recording the weather and the winds on the day it was made.

That assertion proved impossible to confirm; the Boudin Museum has some extremely serious-looking guards. And some seriously fine Boudins -- small, portable canvases painted outdoors, on the nearby beaches of Deauville and Trouville in the 1850s and '60s. 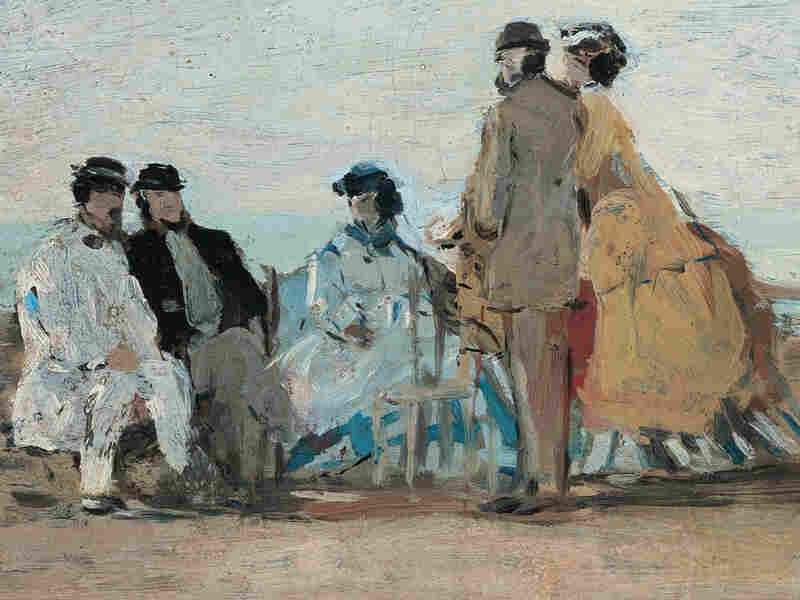 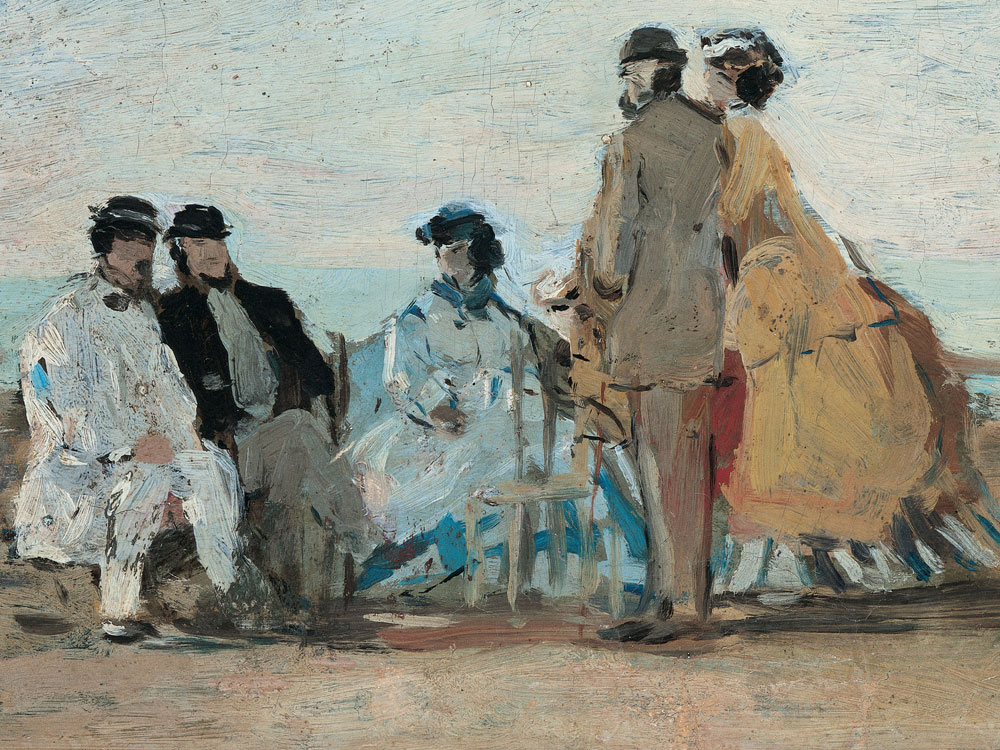 Fainting Ladies And Sea-Bathing By Proxy

Museum guide Rosaleen Aussenac says those beaches were becoming all the rage at the time.

"Up to the 19th century, the beach was a place where fishermen used to go to work," she explains, "not a place to have a nice walk, or to have a nice conversation."

What brought them beachside? In the mid-1800s, fainting -- yes, fainting -- became nearly epidemic among England's noble and wealthy women. (Their tight corsets could not have helped.) Doctors prescribed sea-bathing sessions, among other remedies.

Now, in those days going into the sea was not for the faint-hearted. Ladies changed into bathing costumes inside little cabins; then horses pulled the cabin across the sand, and the lady emerged. 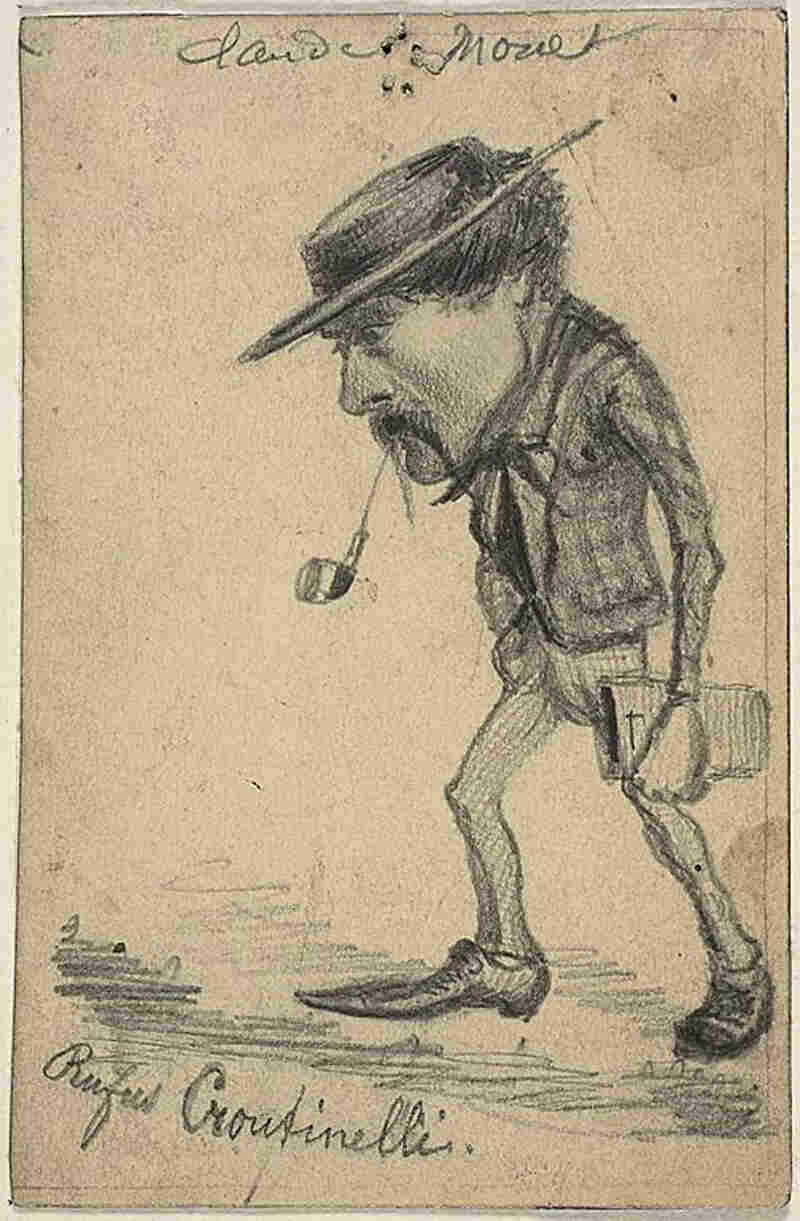 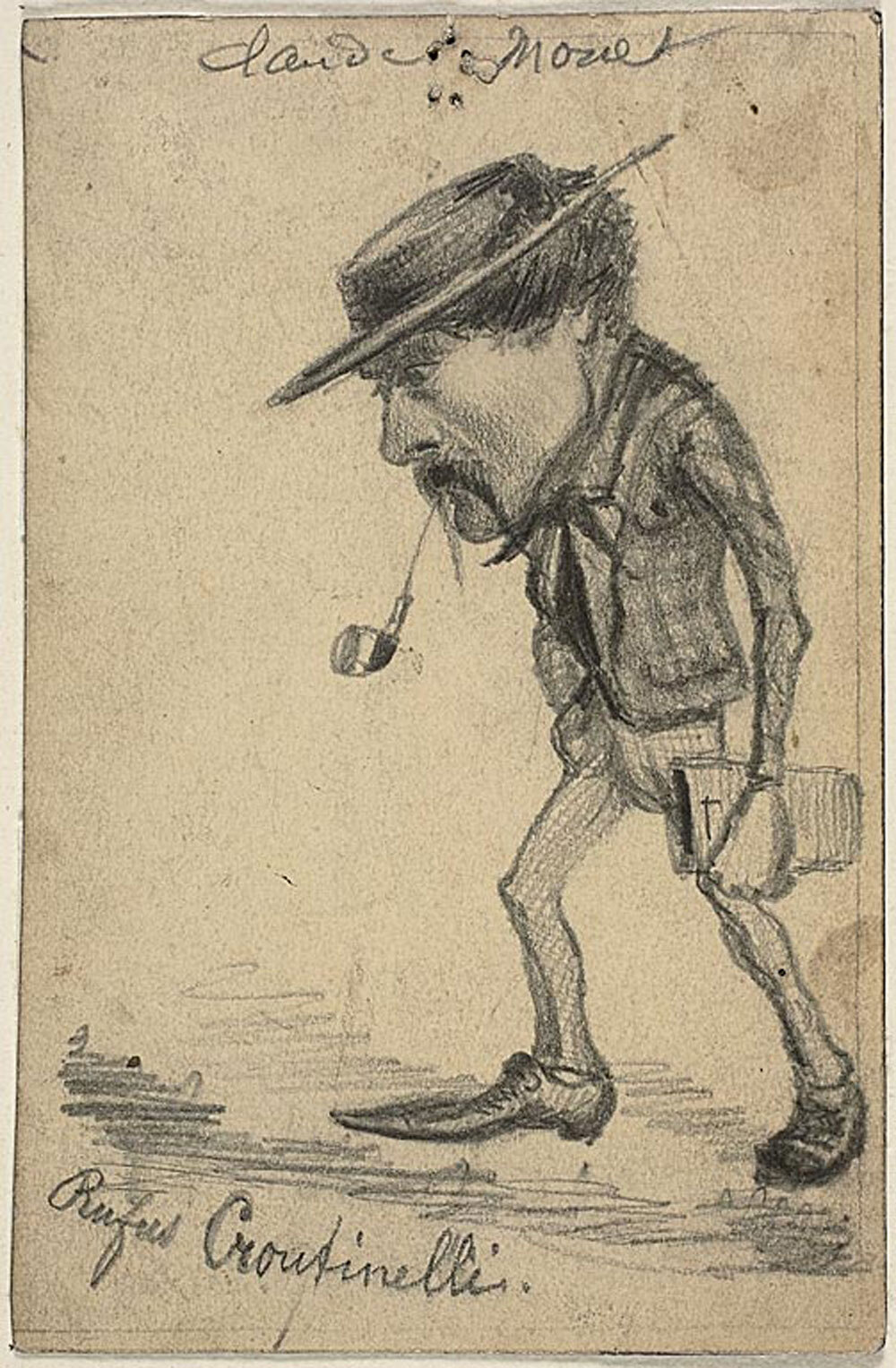 Monet drew this graphite caricature of Henri Cassinelli in 1858.

"And outside waiting for her was a big, strong, handsome man," Aussenac says. "And he would take her in his arms and walk into the sea, and put her in the water -- once, twice, three times. ... Afterward he would bring her back to the cabin, and this was the sea-bathing session -- isn't that nice?"

'I Want You To See The Light'

Eugene Boudin had a grand time painting all this beach activity. So did others -- if the British, then the French upperclasses were going to hit the beaches, artists would go, too, to paint their portraits, do seascapes and make some money under the sunny-cloudy Norman skies. Boudin urged his young friend Claude Monet to join them at seaside. Monet was 15 years younger and making a reputation in Paris, drawing caricatures in charcoal.

Boudin thought Monet could do more.

Boudin kept nagging his young friend. Monet had grown up in Le Havre, and Boudin wanted to get him back to Normandy. "'Come over,'" he urged him, by Aussenac's account. "'I want to show you Honfleur; I want you to see the light.' " 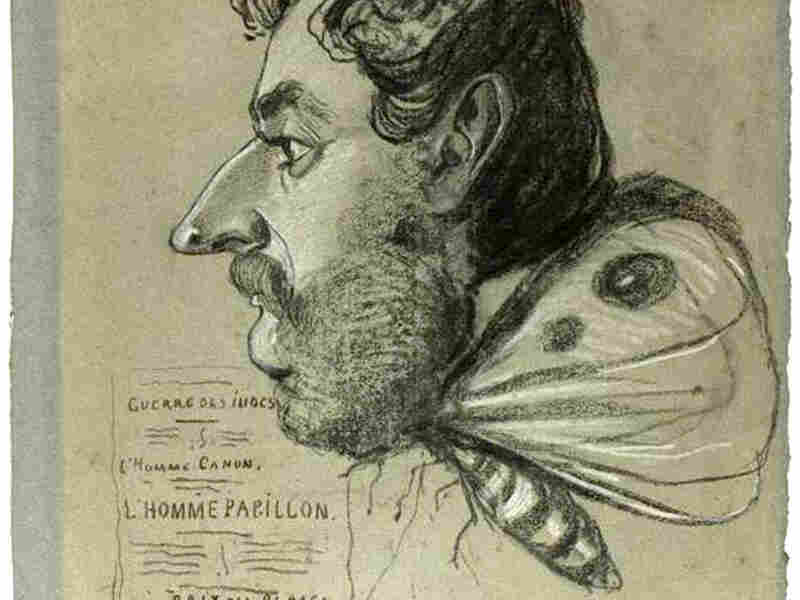 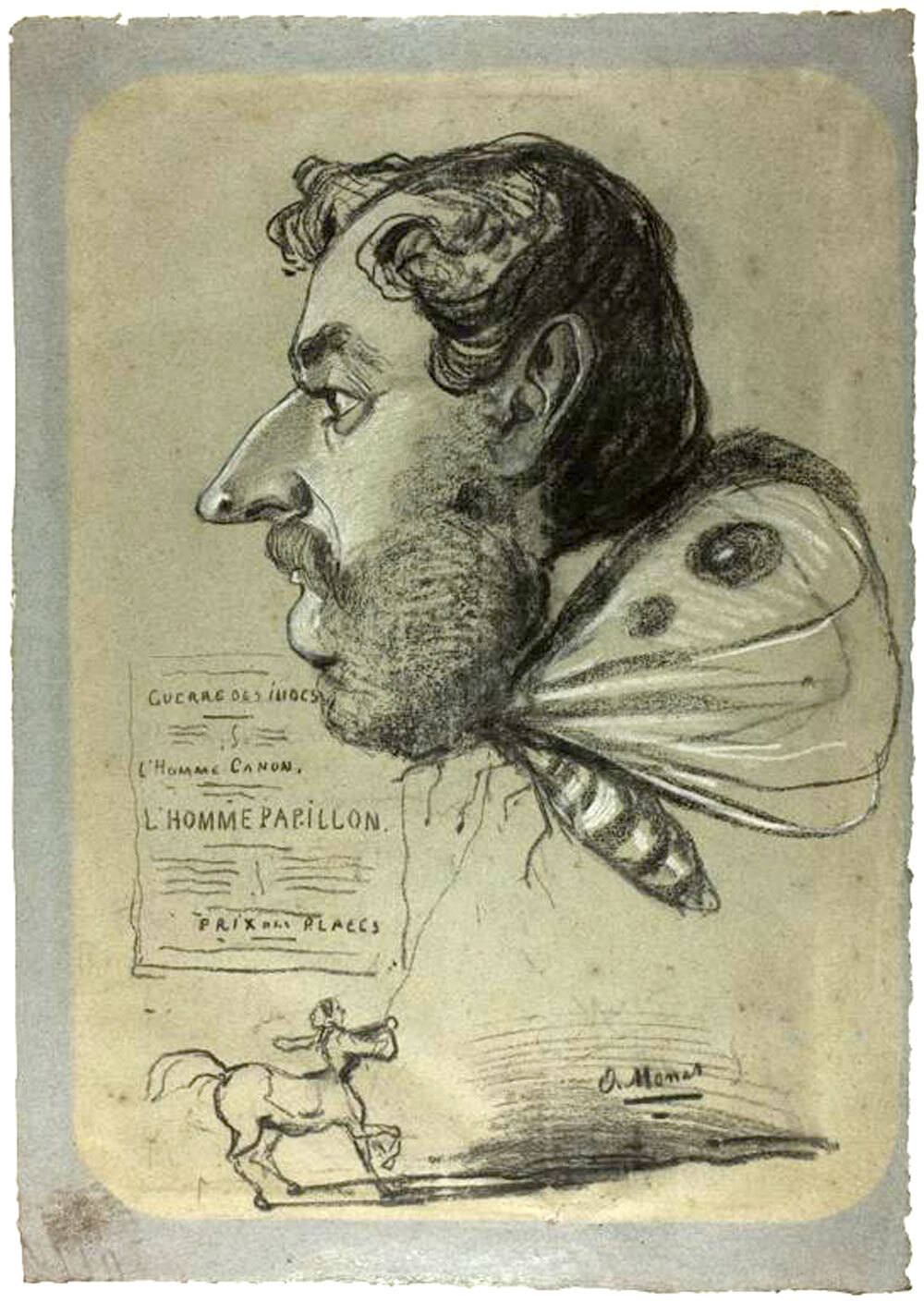 There was that amazing light -- the rich blue skies, dotted with scudding, big-bellied clouds that shifted the sunlight, making fields and rocks broody, then brilliant, in a flash. Monet capitulated, came to Honfleur, and he and Boudin painted side by side, outside, using portable easels and paint in tubes.

Monet, inspired by Boudin, went on to create the very first impressionist painting -- and to make studies of light as it fell on haystacks, a cathedral and -- eventually -- tangles of water lilies, floating in a pond.