Accessibility links
Diabetes Drug Avandia Poses Safety Test For FDA The diabetes drug Avandia used to be a $3.4 billion-a-year blockbuster. Then some studies strongly suggested that people taking it have a higher risk of heart attacks. Two new studies, one from the FDA, nail down the risk -- just as the FDA is getting ready to decide whether Avandia should be taken off the market. 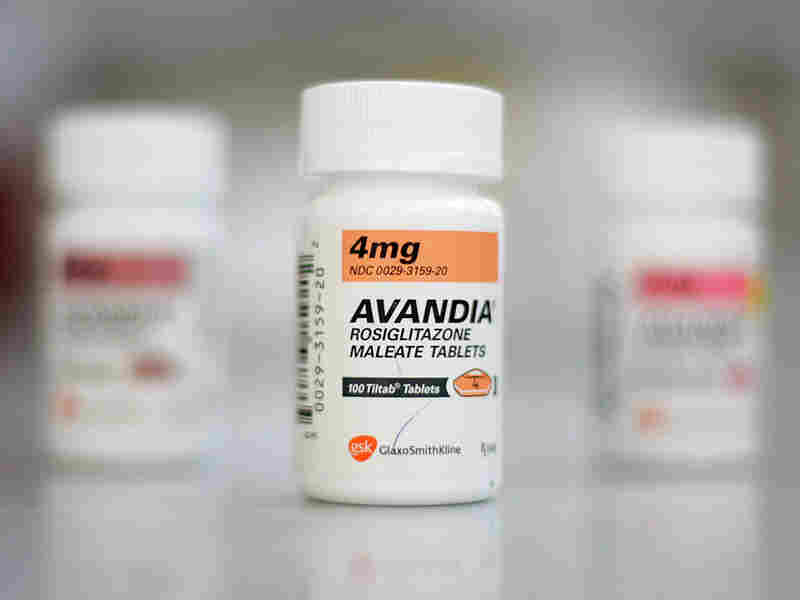 In this photo illustration, bottles of Avandia diabetes medication are seen at Jack's Pharmacy on May 21, 2007, in San Anselmo, Calif. Justin Sullivan/Getty Images hide caption 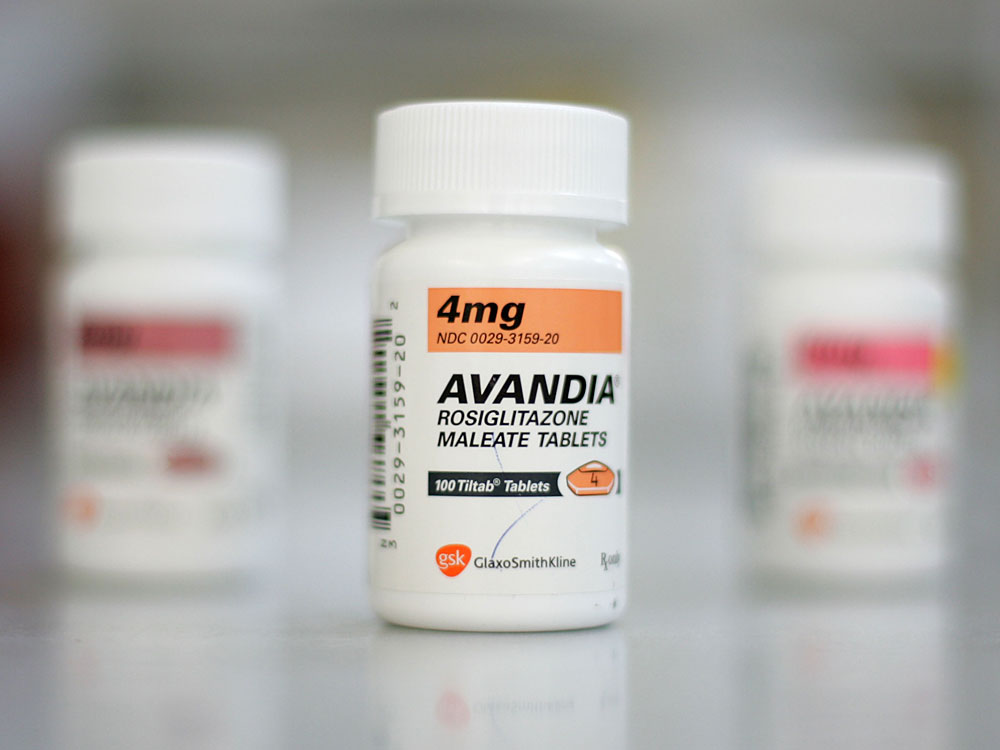 In this photo illustration, bottles of Avandia diabetes medication are seen at Jack's Pharmacy on May 21, 2007, in San Anselmo, Calif.

The Obama administration is facing its first big decision about whether to remove a drug from the market. The issue raises questions not only about the particular drug -– a diabetes pill called Avandia –- but also about the administration's philosophy on these hotly contested public safety calls.

On July 13 and 14, the Food and Drug Administration will have a full-dress debate about the safety of Avandia, a drug taken by hundreds of thousands of Americans with diabetes.

In the run-up to that debate, researchers have published two new studies that add to the growing evidence that Avandia raises the risk of heart attacks, strokes and cardiovascular death.

One of the new studies, the largest done so far on Avandia, was commissioned by the FDA; its results were published online by the Journal of the American Medical Association.

The study looks at what happened when nearly 230,000 Medicare recipients took either Avandia or a related drug, Actos. Dr. David Graham of the FDA, the study's lead author, says the results were alarming.

"If you treated 60 people for a year with Avandia, you would cause one extra case of heart attack, stroke, heart failure or death," Graham says, "compared to if you had treated 60 patients with Actos."

That's a substantial difference. Graham says it means nearly 50,000 elderly Americans have died or had heart attacks, strokes or heart failure due to Avandia since the drug came on the market in 1999. Add in those younger than 65, the number is probably 100,000, Graham says.

A second new study, which appears in the Archives of Internal Medicine, updates an analysis done three years ago that concluded Avandia greatly raises the risk of heart attacks and cardiovascular death.

Study author Steven Nissen of the Cleveland Clinic says the new analysis pools results from 52 studies -– and it still comes out pretty much the same way as his initial meta-analysis in 2007.

"I think what we can say confidently is, looking at the totality of data in 2010, Avandia increases the risk of heart attack compared to other diabetes drugs by about a third," Nissen says.

He started the whole Avandia debate in 2007 with his first meta-analysis, pooling data from dozens of studies, most of them funded by Avandia's maker, GlaxoSmithKline.

Before that first Nissen paper, Avandia was the world's most popular diabetes drug. Afterward, the number of prescriptions dropped by half. But Avandia still brings in more than $1 billion a year for Glaxo in worldwide sales, about half in the United States.

Dr. Jia Patel, the company's vice president for cardiovascular and metabolic drug research, says Nissen and the other critics are wrong about the dangers of Avandia. He says a half-dozen high-quality studies have been completed since Nissen's first bombshell three years ago.

"Taken together, these trials do not show any increase in overall risk of heart attack, stroke or death with Avandia," Patel said an in interview.

Patel says studies that find otherwise all have fatal flaws.

The July hearing before a handpicked FDA advisory committee will attempt to sort out the claims and recommend whether Avandia should be pulled from the market. Then, the agency will have to decide whether to follow that advice.

"We approach what I think will be a defining moment for the administration and the FDA," Nissen says. The cloud of suspicion over Avandia "has gotten greater and greater and greater" over the past 11 years since it came on the market, he says.

FDA officials say Nissen will get a chunk of time to summarize his findings, as will Graham -– and, of course, Glaxo scientists.

Some think the FDA decision about Avandia is overdue. Public Citizen, which is often critical of FDA, petitioned two years ago to remove Avandia from the market.

Dr. David Juurlink of the Institute for Clinical Evaluative Sciences in Ontario, who wrote a JAMA editorial accompanying one of the new articles, notes that the American Diabetes Association and its European counterpart have advised doctors against using Avandia -– though the American Heart Association has called for more studies.

Juurlink says he thinks the accumulating evidence "make it difficult to advance a cogent argument regarding why, exactly, a patient might want to receive the drug or why a physician would choose to prescribe it."

The issue has sharply divided FDA staffers. In late 2007, the agency's Drug Safety Oversight Board -– a panel that does not meet in public nor disclose its deliberations -– voted 8-7 to keep Avandia on the market. Dr. Janet Woodcock, director of the FDA's Center for Drug Evaluation and Research, reportedly has said Avandia's benefits outweigh its risks.

Graham, the FDA's most vocal inside critic, says the way the agency has handled Avandia shows it has failed to learn the lessons of the painkiller Vioxx, whose maker pulled it from the market in 2004 after studies indicated it raised the risk of heart attacks.

What Vioxx and Avandia represent, Graham says, "is a failure of FDA decision-making -– a failure to place patient safety first, ahead of corporate profits."

Support For The FDA

But one of Graham's bosses says the agency has not been dragging its feet.

Dr. Joshua Sharfstein, FDA's principal deputy commissioner, says the agency has been busy lately gathering new data that have come out since 2007 -– including Graham's own Medicare data-dive.

"A lot has changed since then," Sharfstein says. "So we feel that this is a very good time to do a serious assessment of Avandia's safety."

Sharfstein says the FDA has done its own analysis of a large Glaxo clinical trial and will present that at next month's hearing. The company is relying heavily on the results of that study.

The FDA has its defenders. Dr. David Kessler, now at the University of California at San Francisco, is a former FDA commissioner known for tough stands on public safety.

"It's not that the agency has been dithering," Kessler says. "The fact is, these are very hard questions."

But Kessler has doubts about the way things are going with Avandia. For instance, he himself would not volunteer for a large clinical trial comparing Avandia with Actos that the FDA is requiring Glaxo to do. Results are due in 2015.

"I can't see any reason why I would subject myself to that risk," Kessler says. He's not alone. Glaxo has reportedly been having trouble recruiting patients for that trial, which critics call unethical. Some of the study sites are in South America, India, Pakistan and Eastern Europe.

Avandia has also changed Kessler's mind about how the FDA makes decisions on drug safety. He used to think it was OK for the staffers at the FDA's Center for Drug Evaluation and Research to decide whether a drug should be approved and whether it should be taken off the market if problems arise post-marketing.

"I have to tell you, for the first time, I have questions whether somebody who has put their name on an approval letter ... that somehow makes it harder to say, 'Boy, I might have made a mistake,' " Kessler says.

Sharfstein says the FDA is looking at whether those who decide if a drug should stay on the market ought to be walled off from those who let it on in the first place. Results of that review, he says, should also be available this summer.