Accessibility links
Kagan Defends Approach To Military Recruiting Elena Kagan's treatment of military recruiters at Harvard Law School took center stage Tuesday on her second day of confirmation hearings to serve on the U.S. Supreme Court. In tones at times emotional and steely, Kagan defended her record as a Harvard dean, even when challenged by Sen. Jeff Sessions.

In tones at times emotional and steely, Kagan defended her record as a Harvard dean and expressed her respect for students who belonged to the military.

"This has been a sort of long process, and sometimes an arduous one," Kagan said. "I only cried once," when she read a favorable opinion piece by Marine Corps Capt. Robert Merrill, a former student now in Afghanistan.

Kagan, the Obama administration's current solicitor general, asserted that "military recruiters had access to Harvard students every single day I was dean." She did not back down, even when Alabama Sen. Jeff Sessions, the Senate Judiciary Committee's ranking Republican, challenged her veracity about the atmosphere she fostered on campus.

Sessions Quizzes Kagan About Whether She's A 'Legal Progressive'

But Sessions said that Kagan had "mishandled" the military recruiting issue and promoted "an increasingly hostile atmosphere." He went so far as to say that Kagan’s tone was "unconnected to reality."

During a break in the hearing, Sessions told reporters that several of the nominee's statements were "not accurate."

"There's not two truths about what happened at Harvard," Sessions said, but he didn't identify specific statements with which he took issue.

Republicans and Democrats alike used their time Tuesday to explore whether Kagan would take a broad or a narrow role in interpreting the law. Kagan lacks judicial experience, so the issue is a centerpiece of her confirmation hearings.

Conservatives tested whether Kagan's progressive political beliefs would creep into her work on the court. They picked out documents she wrote as a domestic policy adviser in the Clinton White House and in her work as a clerk to Supreme Court Justice Thurgood Marshall.

As a 27-year-old clerk, Kagan said she had tried to "channel" Marshall rather than express her own views. Kagan also allowed that she had worked in two different Democratic administrations, but she gave little more ground. 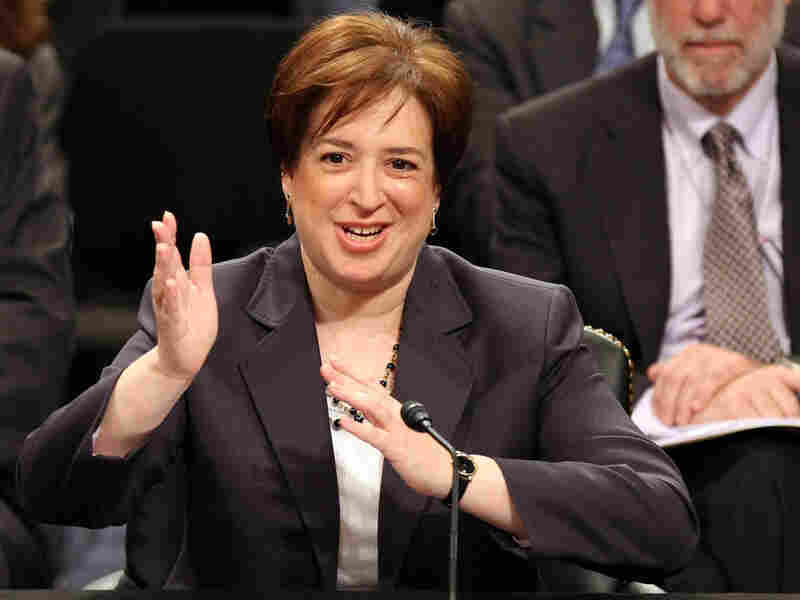 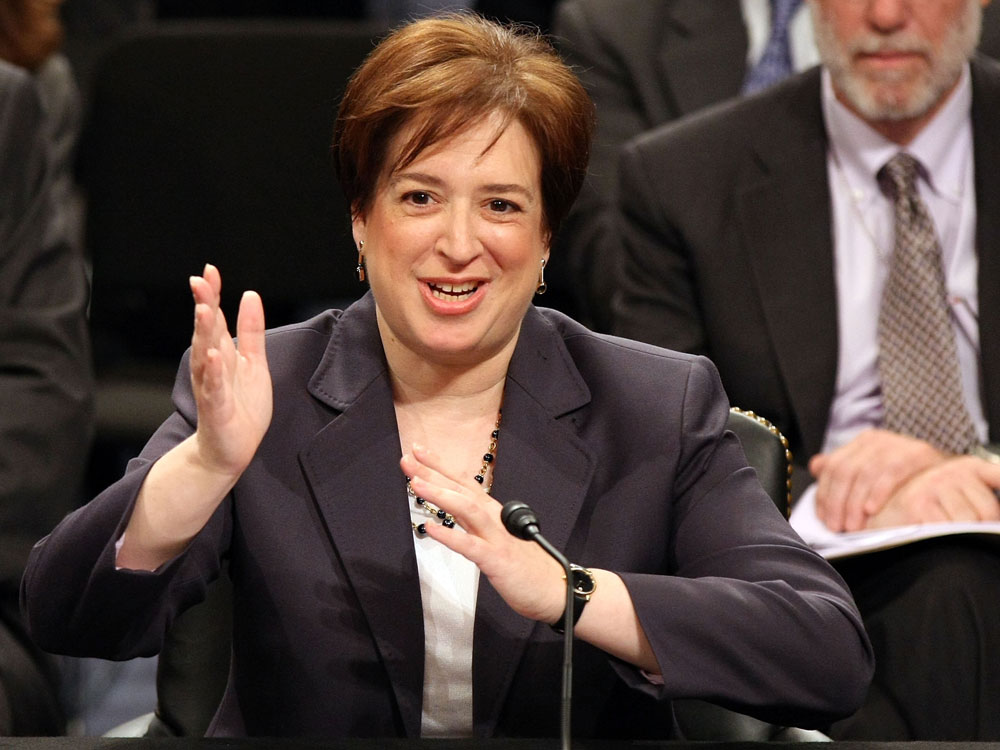 Supreme Court nominee Elena Kagan answers questions from members of the Senate Judiciary Committee on Tuesday, the second day of her confirmation hearings.

"I know my politics would be, must be, have to be completely separate from my judging," Kagan said.

Under friendly questioning from Senate Judiciary Chairman Patrick Leahy (D-VT), Kagan gave some insight into her approach, saying the framers of the Constitution wrote language meant to be interpreted over time. And she said she would hew to a pragmatic, case-by-case approach.

"Sometimes [the framers] laid down very specific rules, other times they laid down broad principles," Kagan said. "Either way we apply what they say, what they meant to do, so in that sense we are all originalists."

Lawmakers spent hours trying to pin down Kagan on controversial issues such as gun rights, abortion and campaign finance.

Leahy, a self-described gun owner, brought up the Supreme Court's 5-4 ruling Monday that the Second Amendment right to bear arms extends to states and localities. Kagan flatly stated that she would accept the high court's gun rulings, even if she might personally disagree with them.

"Is there any doubt after the court's decision ... that the Second Amendment to the Constitution secures a fundamental right for an individual to own a firearm and use it for self-defense in their home?" Leahy asked.

Sen. Dianne Feinstein (D-CA) pushed the nominee on whether Monday's sharply divided gun ruling really should be considered "settled law." Feinstein expressed alarm about the gang problem in her state, and said that the law should make allowances for different states to handle their problems differently.

"That's not enough to say a precedent is wrong," Kagan replied.

Feinstein went on to ask Kagan to square a respect for precedent with the court's evolving approach to abortion rights.

"Women's life and women's health have to be protected in abortion regulation," Kagan said.

Kagan declined to dive into national security policy, saying many of the issues -- including the Obama administration's definition of an "enemy belligerent," what constitutes a battlefield, and how closely a suspect must be tied to terrorist groups -- very likely could come before the Supreme Court. She also refused to address the legality of the government's electronic monitoring program for suspected terrorists.

But in response to questions from Feinstein, the nominee said that where Congress had specifically weighed in to prohibit behavior, the executive branch would have to meet a very high bar to go in another direction.

Sen. Russ Feingold (D-WI) asked for Kagan to give voice to her thinking about the scope of presidential power. "The court generally has a very important role in policing constitutional boundaries," Kagan said, especially in cases where one branch of government intrudes on another. "There are some times when the court really does have to step in and police those boundaries and make sure the president doesn't usurp the authority of Congress or vice versa."

Elena Kagan: At A Glance

Sen. Orrin Hatch (R-UT) probed Kagan for her views of campaign finance regulation and restrictions on freedom of speech. He addressed an October 1996 memo Kagan wrote in the Clinton White House in which she said that money isn't speech.

"The quote that you read was not written by me in my voice; it was a set of talking points," Kagan replied. "It was meant to reflect the administration's position at that time. ... They weren't my personal or constitutional legal views."

"I created a lot of talking points in my time," Kagan added.

As solicitor general, Kagan argued the Obama administration's position on campaign finance in last term's Citizens United case. She lost the argument that money could be a "corrupting influence on Congress."

"Sen. Hatch, I want to say you should be talking to Sen. Feingold," Kagan joked, referring to the Wisconsin Democrat who cosponsored campaign finance legislation overturned by the Supreme Court.

"What we did in the Citizens United case was defend the statute as it was written," Kagan added. "I want to make a clear distinction between my views as an advocate, and any cases I have as a judge."

For the most part, Kagan spoke clearly and calmly during Tuesday's back-and-forth. Sitting behind her was White House Counsel Robert Bauer, who is shepherding his first Supreme Court nominee through the Senate.

Kagan famously wrote a 1995 article describing Supreme Court confirmation hearings as "hollow and vapid." But any hopes that lawmakers had for using that to pry information out of Kagan the Supreme Court nominee were largely dashed.

Kagan herself brought up the article at the start of the day -- and quickly clarified that she believes there are firm limits to the principle of disclosure. It's inappropriate, she said, for a nominee to address how she might rule on pending cases or ones that might come before the court in the future. That meant senators mostly met a closed door when they asked about terrorism, executive power and other issues.

Sen. Lindsey Graham (R-SC) asked Kagan a series of questions about terrorism policy and inquired about Kagan's whereabouts on Christmas Day, the date of an attempted bombing on a plane heading to Detroit.

The nominee hardly missed a beat.

"You know," Kagan said, "like all good Jews I was probably at a Chinese restaurant."

The hearing room erupted in a burst of laughter.

Questioning of Kagan is likely to continue into Wednesday. Later in the week, witnesses identified by the Democrats and Republicans will speak about Kagan's credentials and her candidacy to serve as the current Supreme Court's third female judge.

Kagan's confirmation seems likely, according to legal experts and political analysts, barring an unforeseen slip-up in testimony this week.