Accessibility links
3D Boot Camp: A New Dimension For Live-Action Film With the technology on the rise, more and more cinematographers are looking to become proficient in three-dimensional moviemaking. But clunky cameras mean that many are harboring reservations. 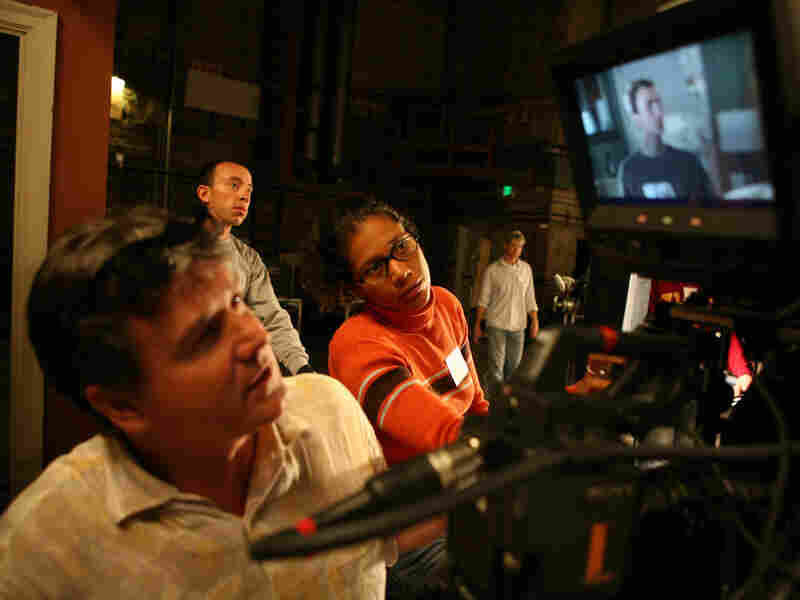 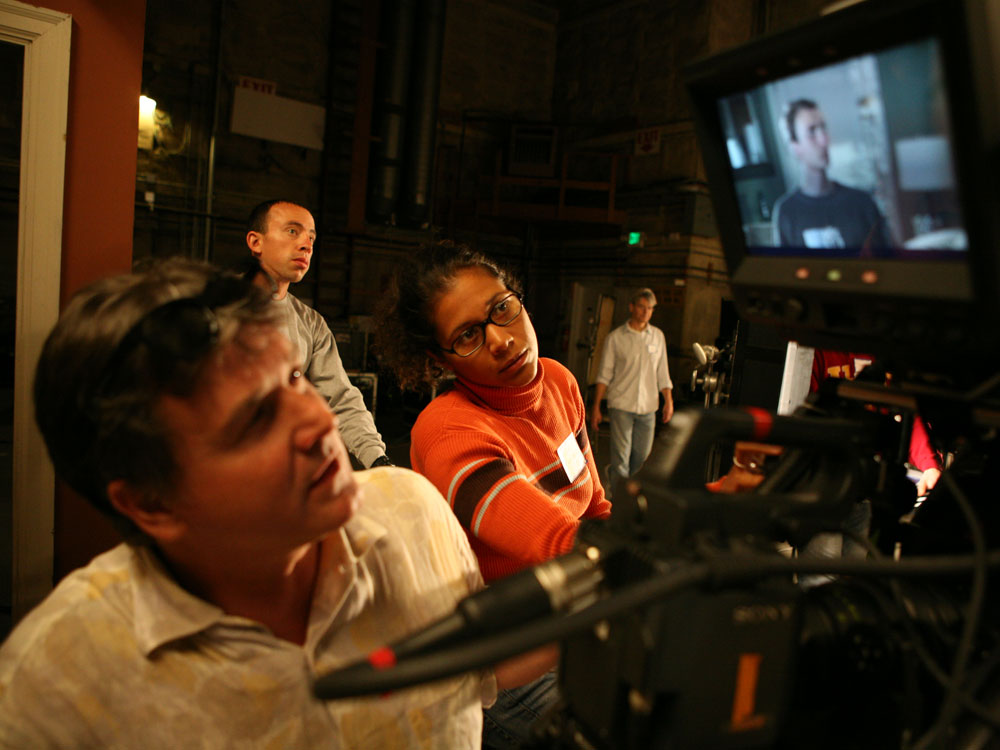 On a dimly lit soundstage at a Sony Pictures Studios back lot, about 30 cinematographers and camera operators are learning a kind of filmmaking most of them have never done before -- 3-D. They're practicing with a scene in which an actor steals a homeless guy's bag. The same wordless scene gets shot and reshot, over and over, until they've got it down.

The filmmakers are part of a free three-day boot camp known as the 3D Technology Center, and they're there because as camp director Buzz Hays puts it, 3-D is not a trend.

"It's been relegated to the gimmick bin for far too long," Hays says. "But for those of us who've been working in 3-D for a while, we realize there's a certain truth to a 3-D image -- that if it's treated well, you can actually really engage an audience in a way that you could never do in two dimensions."

Hays cites the movie Beowulf as an example of a film that uses 3-D to help engage the audience because of how the film's characters become more three-dimensional as they rise in power.

But Beowulf comes from a time when 3-D was more popular among animation, not live-action, filmmakers -- and that's changing. So far this year, most of the big live-action 3-D movies, like Alice in Wonderland and Clash of the Titans, were actually shot in 2-D, then converted to have that extra dimension. As Hollywood filmmakers begin to embrace the third dimension, they're more interested in learning how to actually shoot it. 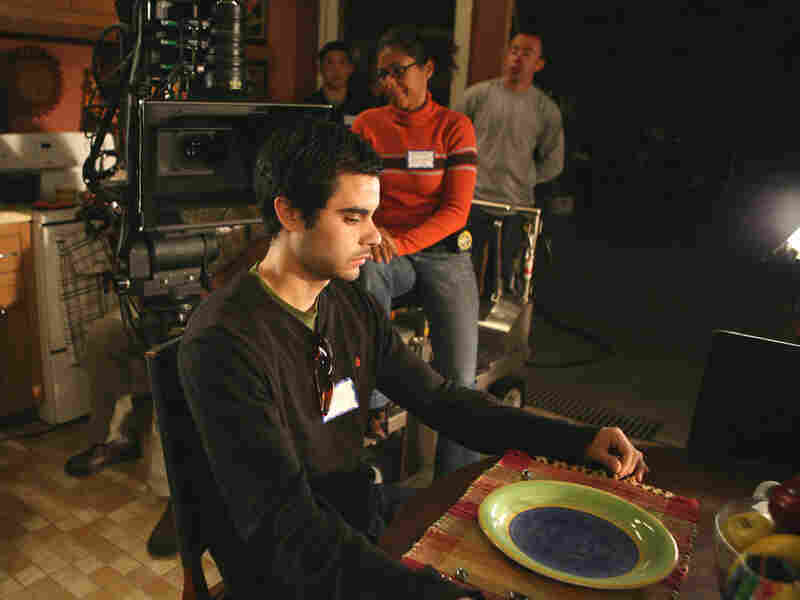 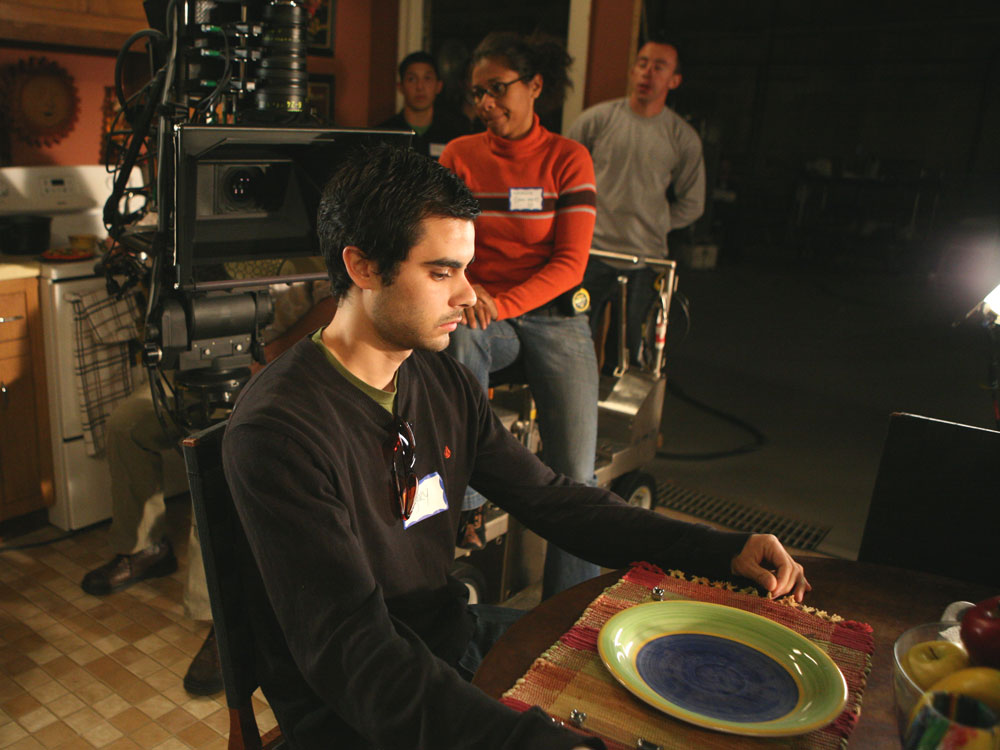 The Sony-run facility opened last February and offers training in the production of 3-D sports coverage, cinema, television and games.

The boot camp begins with serious lectures heavy on technical terms like convergence, interaxial, interocular -- no problem for gearhead cinematographers and camera people, who are game to master this new technology. But they still have reservations.

Camera assistant Jamie Felz is about to begin shooting a new 3-D Harold and Kumar movie in Michigan. But before that, the film's entire camera crew is attending 3-D boot camp. Felz isn't convinced the payoff of switching to a hulking 3-D camera is worth it.

"It's cumbersome," Felz says of the 3-D camera. "The rig that we'll be using in Detroit is 140 pounds. Four people have to carry it."

"We fought so long to get our cameras to a point where you could hide them in places; you could carry them; you could place them in objects where the cameras never went before," he says.

According to Charters, a show like 24 would never have worked in 3-D because the camera had to be nimble enough to follow the star.

"We were with Kiefer [Sutherland] the whole time because of the physicality of the camera," he says. "That's all gone now."

Gone in large part due to one movie: Avatar. Before Avatar, the most cutting-edge 3-D films were animated. Now, everyone from Martin Scorsese to Werner Herzog is making live-action 3-D films.

"A year ago, it was mostly animation students," he says. "But now, especially since Avatar, the production students who are much more interested in live action are really gunning to go."

Perry says it's been hard to find the faculty to meet that demand because there are still so few people out there who can actually do 3-D, much less teach it.

"There a few people who are very, very experienced," he says. "But by and large, the industry doesn't have the kind of cumulative knowledge of making film after film after film."

That's what Sony is aiming to change with its boot camps. Hays, of the 3D Technology Center, says they're free for a reason.

"The payback for us is that eventually someone will either do a Sony picture, or they'll work with Sony equipment, or they'll buy a Sony [camera]."

And as 3-D televisions begin to hit the market, it's in Sony's best interest to ensure that directors and cinematographers can produce content to fill them.

Back on the soundstage, the crowd of cinematographers is going wild over a take of the mugging scene. You'd think someone had pulled off a fancy 3-D tech trick -- but no.

Charters says what killed was the performance.

"He kicked him in the guts and then ran off," he says. "It's the actors. It's always about the actors -- and we're just there to film what they do."