Accessibility links
Puccini's 'The Girl of the Golden West' Full-bore, Italian "verismo" meets the American frontier, in Puccini's Girl of the Golden West, from Glimmerglass Opera. Minnie is a golden-hearted woman serving a Deadwood-style mining camp as everyman's sister, teacher, mother and sweetheart — until a mysterious stranger comes to town, and she falls in love with the wrong guy.

Listen
Puccini's 'The Girl of the Golden West'

Puccini's 'The Girl of the Golden West' 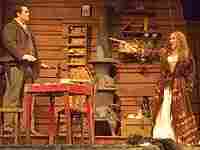 In Puccini's Girl of the Golden West, Minnie shows Jack Rance that she's not a woman to be trifled with. They're played by Emily Pulley and Jake Gardner in a production from Glimmerglass Opera. George Mott/Glimmerglass Opera hide caption

Giacomo Puccini was never shy when it came to writing operas with exotic settings — or at least settings that seemed exotic to European audiences.

Turandot is set in ancient China. Madame Butterfly is set in Japan, around 1900. The last act of Manon Lescaut takes place on a "vast, arid plain," which somehow turns up on the outskirts of New Orleans.

Still, Puccini may have outdone himself with La Fanciulla del West — The Girl of the Golden West. In this one, Puccini's signature "verismo" style comes face to face with America's Wild West. It's as though an Italian potboiler has somehow landed in Deadwood! Surely, this is the only opera to feature phrases like, "Whiskey per tutti!" and "Hello regazzi," and to have one of its crucial moments decided by, "una partita a poker."

The story is based on an American drama by David Belasco. Puccini was a big fan of Belasco, who also wrote the play that inspired Madame Butterfly, and there's still a Broadway theater bearing Belasco's name.

Puccini's Fanciulla was premiered in 1910 at the Metropolitan Opera in New York City, and it was an all-star affair. Dick Johnson was sung by the legendary tenor Enrico Caruso. Emmy Destinn was Minnie and Arturo Toscanini conducted. It was a popular and critical success from the beginning, but it does contain some of Puccini's most modern-sounding music and not everyone takes a liking to it the first time around. The character of Minnie was also something new for Puccini: She's a tough cookie, unlike the sad, put-upon, mostly doomed leading ladies of his other operas. In Fanciulla, Minnie takes gun, and fate, firmly in hand.

On World of Opera, host Lisa Simeone brings us a performance from a more pastoral New York locale than the Metropolitan. It's a production by Glimmerglass Opera, about 10 miles north of Cooperstown.

The Story of 'The Girl of the Golden West' 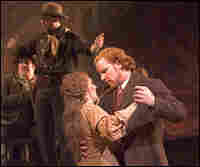 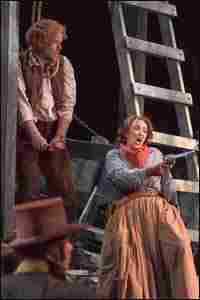 ACT ONE: The opera is set during the Gold Rush of 1849, and opens at sunset in the Polka Saloon, owned by a woman named Minnie. Nick, the bartender, greets miners who wander in for drinks. Minnie is preparing to lead Bible studies, assisted by two Indians, Billy Jackrabbit and his girlfriend Wowkle.

Miners known as Happy, Harry, Handsome and Joe sit down to play a game of cards, with a fellow named Sid as the overseer. But Sid is caught cheating, and the miners threaten to hang him. Sheriff Jack Rance steps in to administer a little frontier justice. He pins a Two of Spades to Sid's chest as a mark of shame, and tells the others to spread the word: If Sid removes the card, he'll be shot on sight.

Ashby, a Wells Fargo agent, shows up asking for Minnie. He also tells Sheriff Rance that he's closing in on a notorious bandit who goes by the name Ramerrez.

Rance begins to brag that Minnie will soon be his wife. But Sonora taunts him, saying Minnie really loves him. It's no wonder. Nick has been telling every man who comes to the bar that Minnie is sweet on him — leading each one to buy rounds for the house to celebrate.

Rance declares his love for Minnie, who brushes him off. Rance sings of his unhappy childhood and his gambling life, saying he'd give a fortune for just one kiss. Minnie says that's fine, but she's holding out for true love.

Nick then brings in a stranger, who calls himself Dick Johnson, and has been asking for whiskey and water. Rance demands to know Johnson's business, but Minnie vouches for him. It seems they've met before, and the two of them dance a waltz together.

Ashby and a group of men drag in Jose Castro, a member of the Ramerrez gang. Castro says he has no loyalty to Ramerrez, and to save his own skin he offers to lead the men to the bandit's camp. Then, speaking privately to Johnson, Castro tells him that the gang is ready to rob the saloon and he's only leading Ashby and the others away as a ruse. Johnson is supposed to return a whistle as a signal that the coast is clear. Castro and the other men leave.

Nick says that a bandit has been seen hanging around, which worries Minnie. But Johnson comforts her and agrees to come to her place for dinner. There's a whistle from outside, but Johnson doesn't return the signal. It seems an evening with Minnie is more important to him than another heist.

ACT TWO: In Minnie's cabin Billy and Wowkle, her Indian servants, sing a lullaby to their child and talk about getting married. Minnie sends Billy away so she can dress for dinner with Dick Johnson. Johnson shows up for their date and wonders about Minnie's unorthodox life among the rough and tumble miners. Minnie says she wouldn't have it any other way.

After dinner, Johnson persuades Minnie to give him her very first kiss. He knows he shouldn't let things go further but a blizzard prevents him from leaving. Minnie says he can stay over; he can have her bed, and she'll sleep by the fire. Then they hear voices outside. Minnie hides Johnson behind the bed curtains and opens her door to find Rance, accompanied by Nick, Ashby and a miner called Sonora. They say they're worried about her. They've discovered that Dick Johnson is really the notorious bandit Ramerrez, and Nick saw him heading up the trail toward Minnie's cabin.

Minnie tells them she's fine, and sends them away. Alone with Johnson again, she confronts him. He admits that he is Ramerrez, but begs for forgiveness and says he'll give up everything to be with her. Minnie says she can forgive him for being a bandit, but not for stealing her first kiss with a pack of lies. Johnson leaves, but as he closes the door behind him there's a gunshot. Minnie goes to investigate and finds Johnson outside, wounded and bleeding. She brings him in, and helps him climb through a trapdoor into the attic just before Rance arrives.

Minnie says Johnson isn't there and dares Rance to search her cabin. Rance is about to give up and go when a drop of blood falls from the ceiling. He orders Johnson to come downstairs. Johnson stumbles down the ladder, and passes out. Minnie challenges Rance to a game of poker. If she loses, she'll marry Rance. If Minnie wins, Rance must let her go off with Johnson. Rance accepts the terms. They play poker, best two hands out of three. It's a scene worthy of a classic, Hollywood Western — a tense showdown with life and death stakes, playing out with ominous music thrumming in the background. During the game, Minnie pretends to faint and switches her cards so she ends up with the winning hand. Rance is furious, but he holds up his end of the deal. He leaves, and Minnie tends to the wounded Johnson.

ACT THREE: Some time later, Nick, Ashby and Sherrif Rance gather around a campfire. Ashby says he thinks his men have caught up with Ramerrez — but it turns out to be a false alarm. They talk about how everything has changed since this "Johnson" appeared.

The jealous Rance points to Minnie's cabin and says that before long, she'll see her lover at the end of a rope — and soon it looks like he's right. Johnson is finally captured. He's brought in tethered to his horse, and Billy is ordered to prepare the noose. Johnson says he's ready to die. His only request is that Minnie never be told that he's dead. He wants her to think that he's just fine, gone off to lead a new life somewhere else. Hearing him talk lovingly about Minnie is too much for Rance, who punches Johnson in the face.

Johnson is about to hang when we hear Minnie's voice. She rides in on horseback and pleads for mercy for Johnson. When the men ignore her she draws a pistol, threatening to kill both Johnson and herself. The miners are divided over what to do. Then she reminds the men of all she's done for them, how she's helped every one of them in special ways, and they give in. Outnumbered, Rance has no choice but to turn his prisoner loose. Minnie and Johnson are allowed to leave together, unharmed. The miners bid their darling Minnie a sad farewell and she and Johnson go off, singing, into the distance.