Accessibility links
After Branch Kills Baby, New Yorkers Look Skyward Questions remain about who -- if anyone -- is responsible for the weekend death of a 6-month-old baby killed by a falling tree limb in New York's Central Park. Was the weekend accident, which also seriously hurt the baby's mother, just a freak occurrence? Or was it the result of negligence? 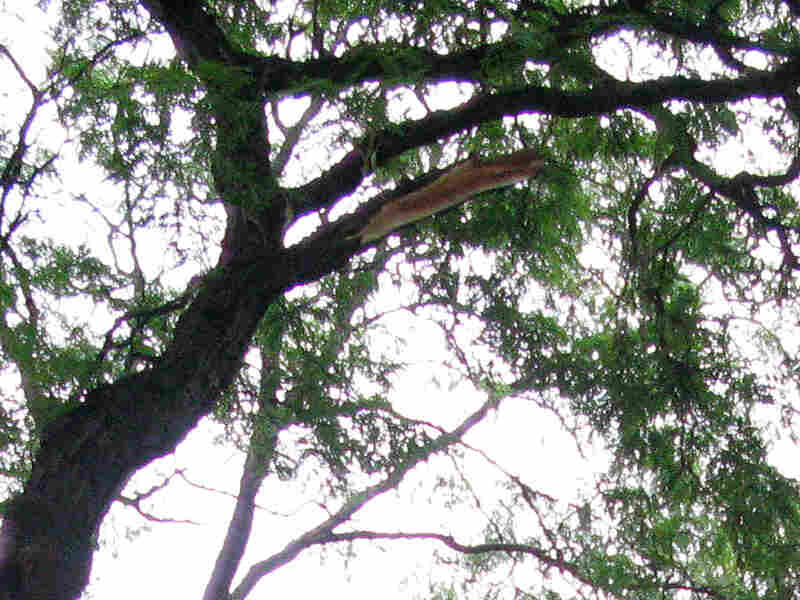 In New York City, there are still questions about who -- if anyone -- is responsible for the death of a 6-month-old baby killed by a falling tree branch in Central Park. Was the weekend accident, which also seriously hurt the baby's mother, just a freak occurrence? Or was it the result of negligence?

Here's where New York Mayor Michael Bloomberg comes down on it: "This may have just been an act of God."

There are 24,000 trees in Central Park. They provide beauty, shade and a home for migrating birds on the Atlantic Flyway. They shelter owls and raccoons, provide food for Baltimore orioles and scarlet tanagers. But this past year, there have been two deaths from falling branches.

This latest tragedy happened on a perfect summer day, when the limb fell on the mother and child while they posed for a photograph. The branch -- described as healthy -- fell from a tree at the Central Park Zoo.

Suddenly, the more than 25 million people who use the park are looking up more often.

Many who were there on Tuesday were tourists who hadn't heard about the incident, but New Yorkers were eager to comment.

"My whole thing is keep everything green. But if it is going to kill people, cut it down," says John Kovac, who was selling bottles of water in the park.

Other comments ran the gamut:

"It definitely makes you more conscious of your surroundings and what's going on," says Jenna Deligio.

When asked if she considered it a freak natural occurrence, Bernadette O'Connell says: "I think it is nature. It's not a freak of nature. It's just the way things go."

Last August, a short, intense summer storm called a microburst downed more than 100 trees in the park. For months, you could see uprooted trees -- and some have yet to be removed. Workers piled up cut logs and wood chips in fenced-in areas as big as buildings.

Perhaps that storm -- or the heavy winter snows -- weakened more trees than we know.

One of their projects involves smoke jumpers -- the same men and women who jump from planes and helicopters to put out forest fires in the West. When fire season is over, they come to New York City to chase the Asian Longhorned Beetle. When they find infestations, trees are cut down.

There's a lot of maintenance that goes on here every day, but perhaps it's still not enough. Year by year, the trees in the park grow older, larger, higher, leafier and perhaps for some, sadly, more fragile and dangerous.