Accessibility links
Afghanistan To Test Petraeus' Master Plan Concerns are increasing over what is seen as a faltering war effort in Afghanistan, and whether the new counterinsurgency strategy will succeed. Eyes are on Gen. David Petraeus to see how — and even if — he revises the plan. 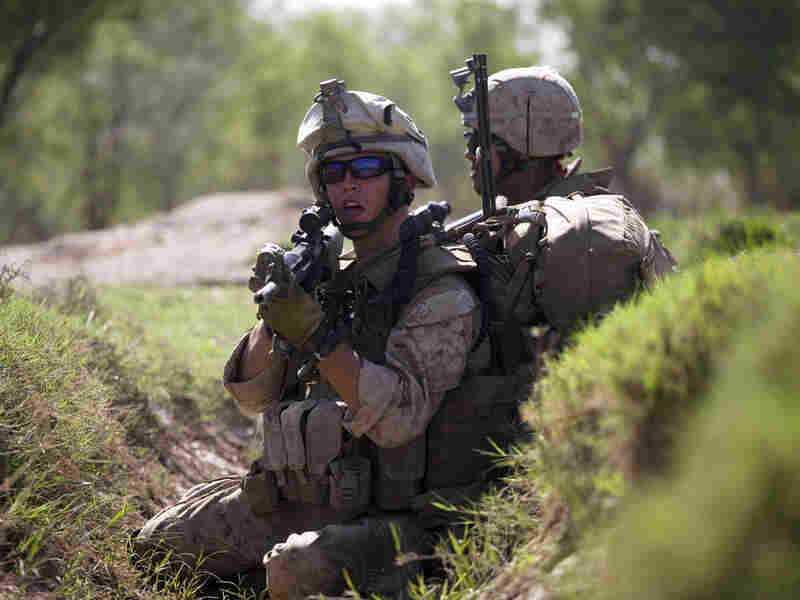 U.S. Marines take cover as they are involved in a gun battle in March during a patrol in Marjah, Afghanistan. In February, U.S.-led troops set out to rid the area of insurgents and set up a viable local government. But Taliban militants have returned to the area. Dusan Vranic/AP hide caption 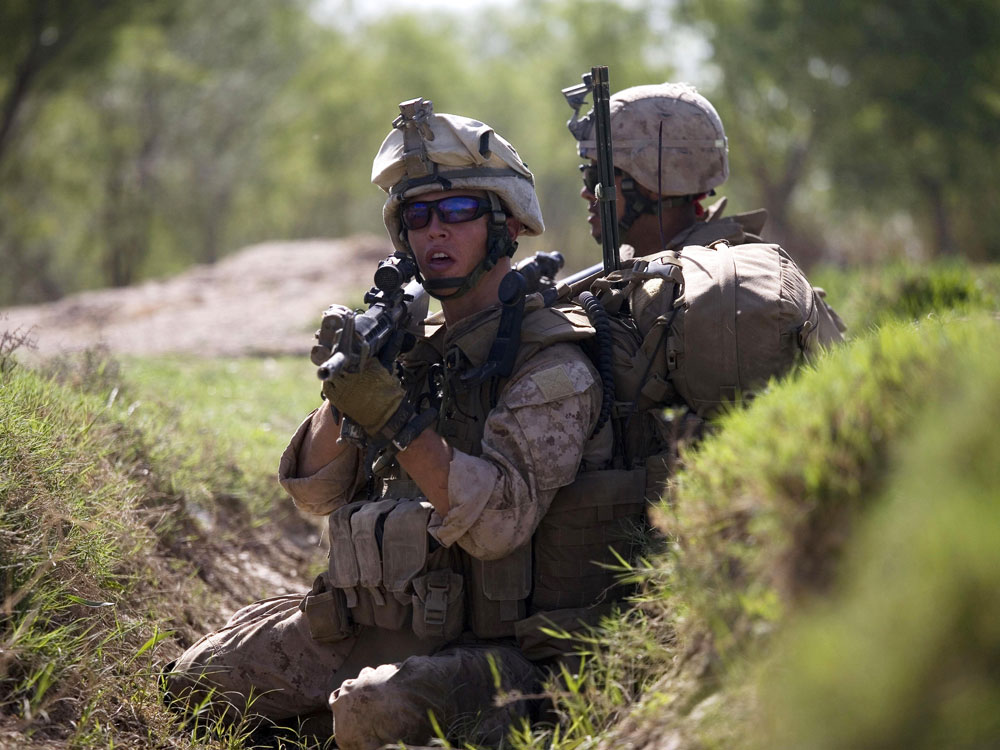 U.S. Marines take cover as they are involved in a gun battle in March during a patrol in Marjah, Afghanistan. In February, U.S.-led troops set out to rid the area of insurgents and set up a viable local government. But Taliban militants have returned to the area.

Gen. David Petraeus' nomination as top U.S. commander in Afghanistan comes at a critical time. June has been the deadliest month for the U.S.-led coalition in the nearly nine-year-old war: More than 90 foreign troops have been killed.

Concerns are also increasing over what is seen as a faltering war effort, and whether the new counterinsurgency strategy for Afghanistan will succeed.

Petraeus' confirmation hearing Tuesday clearly showed that there are high expectations for the four-star general, not only to seamlessly assume command in Afghanistan but to quickly try to salvage the war effort there.

President Obama signed off on a counterinsurgency strategy for Afghanistan in December, which involves deploying an additional 30,000 U.S. troops to battle insurgents while civilians help build the country's infrastructure and civil society.

So far, the results are widely viewed as less than promising.

Nowhere has this been more evident than in southern district of Marjah. U.S.-led troops launched an offensive there in February, promising to quickly rid the area of Taliban and other insurgents and to set up a viable local government. But the so-called government in a box has evaporated, and Taliban militants have come back to the area.

When Petraeus was tapped last week to replace Gen. Stanley McChrystal as the new U.S. commander in Afghanistan, Defense Secretary Robert Gates gave him the green light to tinker with the counterinsurgency strategy.

Any strategy is about three basic things: objectives, resources, time. And so anybody looking at the Afghan strategy has to be considering the time factor as one of the most important issues.

This is not uncommon, says David Kilcullen, a counterinsurgency specialist who was a senior adviser to Petraeus in Iraq. "If we've learned anything from the experience of counterinsurgency over the last few hundred years, it's that adaptation and change are normal and critically important," he says.

Petraeus literally wrote the book on counterinsurgency now used by the U.S. military. He implemented it in Iraq, and McChrystal adapted it when he took command in Afghanistan last year.

Petraeus indicated, if confirmed, he would alter the rules of engagement, which U.S. troops have complained limit the use of firepower and airstrikes, to protect civilians.

"If you kill or capture innocents, you can create more insurgents. But if you're too restrictive in terms of how your rules of engagement are applied, you can put your troops at too much risk," he says.

Petraeus didn't indicate he would make any other sweeping changes to the strategy, which he described as sound. He said there would just be a bit of what he called tinkering and tweaking, that it was more about executing than redesign.

But Andrew Bacevich, a retired Army colonel and now a professor of history and international affairs at Boston University, disagrees.

"Gen. Petraeus is deeply invested in this doctrine of counterinsurgency. My own view is that the counterinsurgency strategy ... isn't working and that what we really need isn't just a change of command but a radical change of approach," he says.

Bacevich questions why the U.S. continues to pour enormous amounts of troops and money into Afghanistan. Like other analysts, he favors a smaller American presence there.

Bacevich says an equally effective counterinsurgency strategy would involve two components. One would be a comprehensive intelligence collection and analysis network.

The second, Bacevich says, would be a strike capacity, one that has the ability to attack jihadists if they were engaged in something the U.S. thought was unacceptable. Bacevich says that strike capacity could consist of "aerial platforms" or "small contingents of special operations forces."

Military officials say special operations forces have already been effective in routing out insurgent leaders, but counterinsurgency specialist Kilcullen says there is more involved in the strategy, such as building good governance, curbing corruption and training an effective security force. Those efforts take time.

But there are looming deadlines, including an administration progress report due in December and the July 2011 timeline that Obama uses as a goal to begin a drawdown of U.S. troops, based on conditions.

Kilcullen says he wouldn't be surprised if Petraeus figures this into any revisions he makes on the counterinsurgency strategy.

"Any strategy is about three basic things: objectives, resources, time," he says. "And so anybody looking at the Afghan strategy has to be considering the time factor as one of the most important issues."