Accessibility links
Oil Spill Crisis Puts Jindal Back On Center Stage Louisiana Gov. Bobby Jindal was once a rising star in the Republican ranks, but he stumbled after a lackluster rebuttal to President Obama's first address to Congress. These days, Jindal often sounds like a general, and his war is as much against the federal government as it is with the oil. His persistence is scoring points with voters. 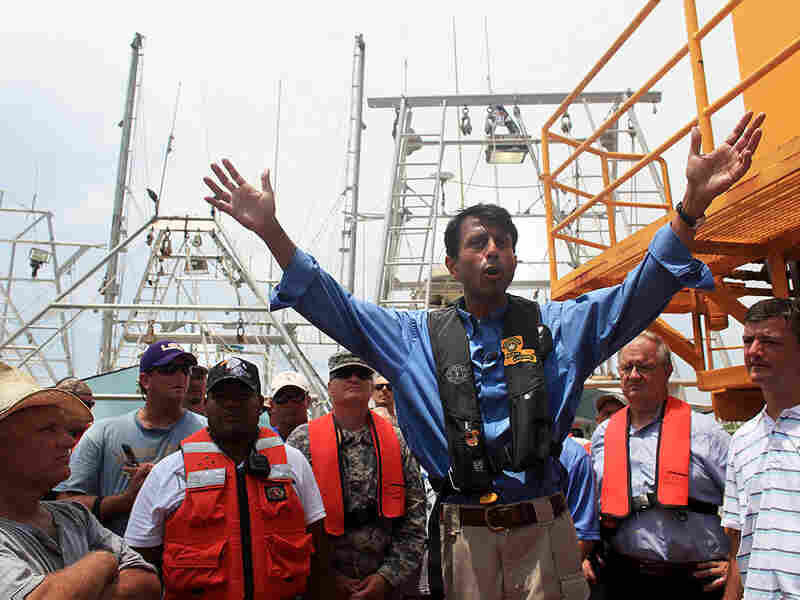 The efforts of Gov. Bobby Jindal to get the BP oil spill cleaned up have helped his popularity among Louisiana voters. Here, Jindal speaks on a command post boat in Barataria Bay, off Grand Isle, La. Spencer Platt/Getty Images hide caption 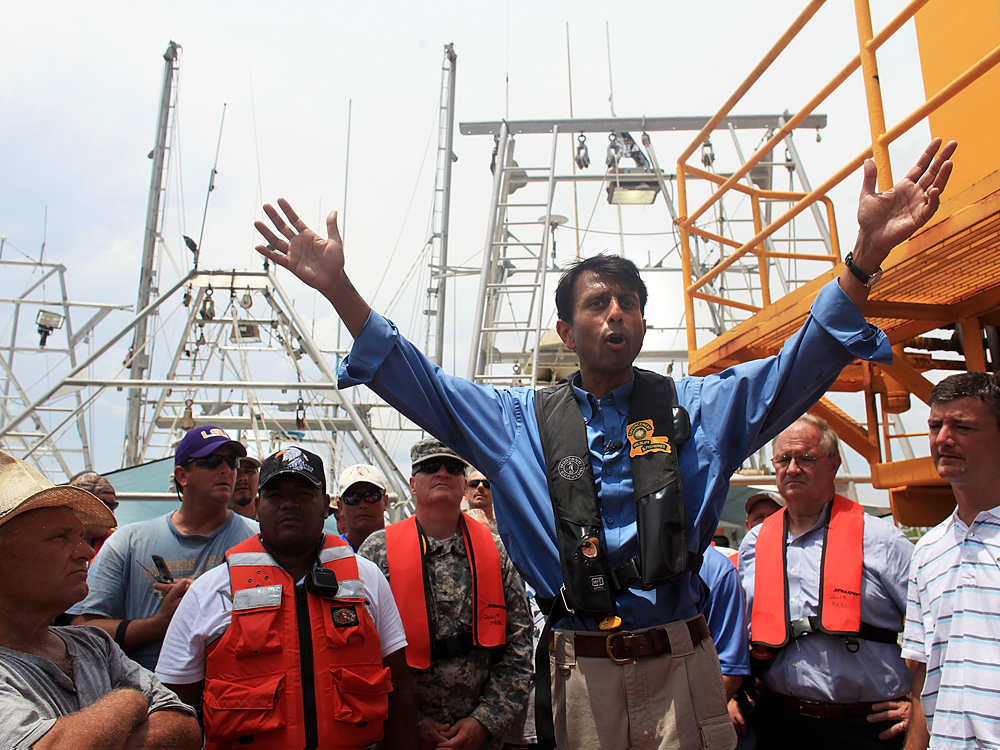 The efforts of Gov. Bobby Jindal to get the BP oil spill cleaned up have helped his popularity among Louisiana voters. Here, Jindal speaks on a command post boat in Barataria Bay, off Grand Isle, La.

The oil spill in the Gulf of Mexico has thrust Louisiana's conservative young governor back into the national spotlight. Bobby Jindal was once a rising star in the Republican ranks, but he lost his footing after a lackluster rebuttal to President Obama's first address to Congress. Now, he's pushing the Obama administration to do more to help his imperiled coast.

Just about every day since the oil spill began, Jindal has been in south Louisiana, near the marshes and bayous threatened by the never-ending gusher.

"This is only done when they've mitigated the damage and they've restored our wetlands and our wildlife back to what it was pre-spill," Jindal said.

"How long's that going to take, to get our life back?" Frickey asked before adding, "If we ever get it back."

"That's why we've got to be playing offense," Jindal said. "We're not winning this war right now."

These days, Jindal often sounds like a general, and his war is as much against the federal government as it is against the oil. For weeks, the governor badgered the Obama administration to build a series of sand berms to protect Louisiana's coast from the oil.

Now he's furious that regulators stopped the $300 million project because the state was dredging for sand in sensitive areas that were not approved.

Jindal waged a similar battle to get vacuum barges sucking up oil in the marshes, and he filed a court brief arguing against Obama's moratorium on new deep-water drilling -- which was struck down by a federal judge in New Orleans last week.

Jindal's fast-talking, wonkish approach; his youth; and his Indian-American heritage all make him a different kind of Louisiana leader. But he's also one with whom state voters seem happy. Most recent polls show him with approval ratings of 61 percent or higher.

When there's a disaster, people expect their governor to be there, and Jindal has been, says Louisiana political columnist John Maginnis.

"Even if sometimes he seems like he's beating his head against the wall or trying to hold back the sea, they give him credit for being out there and persisting and for raising hell at times," Maginnis says.

Jindal's political career has been on a rocket trajectory. The Rhodes scholar was head of Louisiana's largest state agency at the age of 25, president of the University of Louisiana system at 28 and elected to Congress at 33, and he moved into the governor's mansion at 36. He made Sen. John McCain's vetting list for a running mate in 2008 and quickly became the freshest face on the Republican national circuit.

In 2009, Jindal was the GOP's choice to deliver the rebuttal to Obama's first address to a joint session of Congress. He spoke about the economy and the effort to recover from Hurricane Katrina. But the performance was widely panned, and Jindal disappeared from the national stage.

Now he's back with a similar theme and a similar contradiction. He's against big government, but also calling on the feds to do more.

Jindal argues that in times of disaster, it's the government's responsibility to act. Maginnis says the governor is navigating a tricky line.

"He's caught a lot of criticism for being someone who has always argued for less government, but here he is wanting government to respond," Maginnis says.

Some Louisiana environmentalists and scientists are skeptical about Jindal's plan to build a giant sand wall to protect the coast. They say he's pushing it for political, not scientific, reasons.

The 'Katrina Dynamic,' In Reverse

The situation between Jindal and the Obama White House resembles what Len Bahr, former head of the state Office of Coastal Activities, calls "the Katrina dynamic."

Bahr is referring to the ineffective working relationship between then-Gov. Kathleen Blanco, a Democrat, and Republican President George W. Bush in the aftermath of Hurricane Katrina.

"It's to the governor's political interests to make the president look ineffectual, by stalling on permits," Bahr says. "No matter what he hears, he's gung-ho to do this at all costs, and I think that's just a totally unfortunate situation."

Others question Jindal's staunch defense of offshore oil and gas drilling, given that the industry is among his top campaign contributors. But oil and gas also account for one in three jobs in the state and have an estimated $70 billion economic impact.

In southern Louisiana, people whose livelihoods are threatened by the oil spill don't see a conflict. Seventh-generation oysterman Mike Voisin says the governor is doing exactly what he should be doing.

"He's a hands-on kind of guy," Voisin says. "He is calling on BP aggressively to take responsibility in many different facets. He has a grasp, and he's acted."

The question is whether Jindal's response to the oil spill has catapulted him back into the national political arena. The governor says he's only interested in running for re-election in Louisiana next year. And after all, at 39, he has plenty of time to ponder higher office.