Accessibility links
After Testimony, Kagan Appears Headed For Court Senators have spent two days confronting nominee Elena Kagan with questions about abortion, gun rights and presidential power. But while she may not get their votes, even Republican leaders say it seems likely she will make it to the Supreme Court. 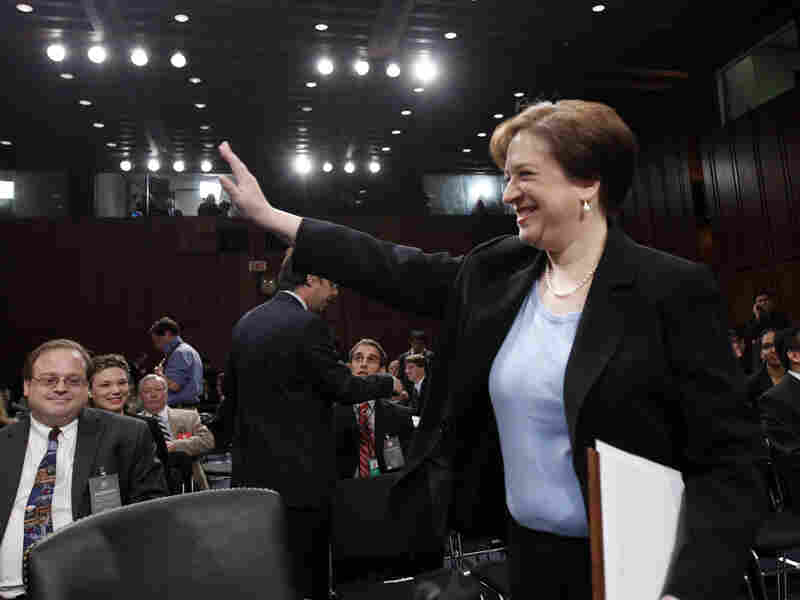 Supreme Court nominee Elena Kagan waves before sitting down for the third day of her confirmation hearing on Wednesday. Alex Brandon/AP hide caption 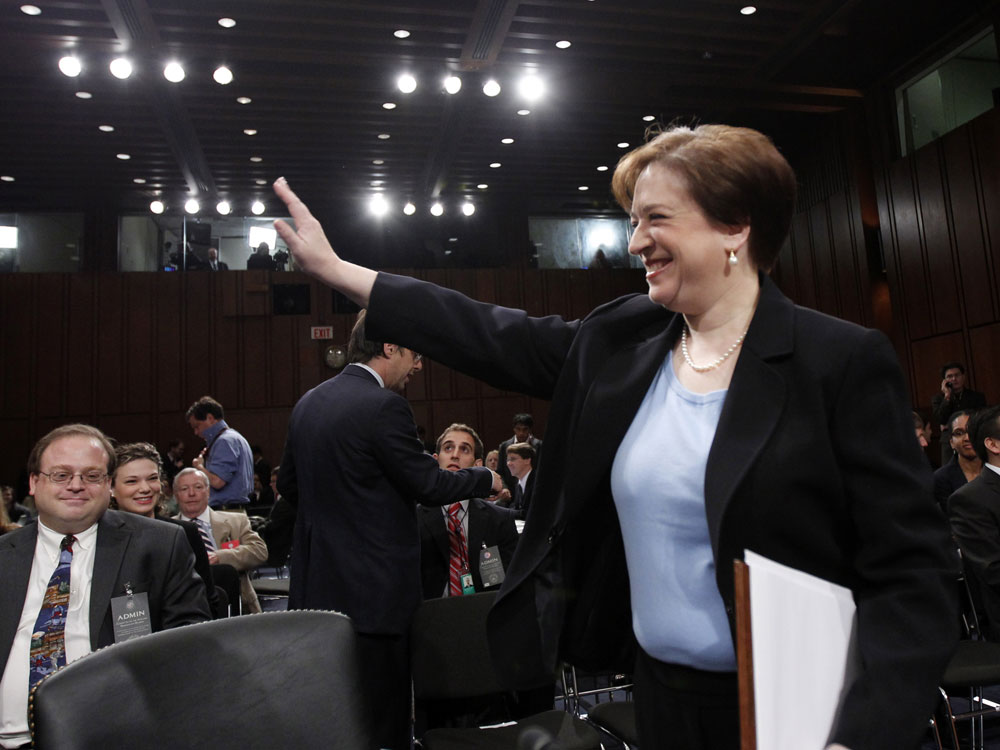 Supreme Court nominee Elena Kagan waves before sitting down for the third day of her confirmation hearing on Wednesday.

Senators have spent two days confronting nominee Elena Kagan with questions about abortion, gun rights and presidential power. But while she may not get their votes, even Republican leaders say it seems likely she will make it to the Supreme Court.

Sen. John Cornyn (R-TX) told a huddle of reporters in the hearing room that he assumed Kagan, President Obama's second high court nominee, would be confirmed. And Senate Judiciary Committee Chairman Patrick Leahy (D-VT) told NPR's Michele Norris Wednesday afternoon that "I think the jury is gonna be all right on this one."

The Democratic caucus controls the Senate, 58-41.

California Democrat Dianne Feinstein all but offered her congratulations to Kagan, noting that she is on track to become the fourth woman to serve on the Supreme Court, blazing a trail for others. "I really believe that once you cross that threshold and the door is open, it remains open for all time," Feinstein said.

The Senate Judiciary Committee finished its questioning of Kagan in closed session Wednesday, and planned to interview witnesses identified by Republicans and Democrats late Thursday. Once the hearings are completed, the panel will vote on whether to send the nomination to the full Senate, which is expected to act before the August recess.

Senators representing both political parties tested Kagan for a second full day Wednesday. But the nominee resisted attempts to chart a broad vision for her judicial approach, in keeping with a pledge that she will decide cases individually and defer to Congress.

Kagan affirmed once again that she has respect for legal precedent, which she said calls for modesty and restraint.

"One of the benefits of narrow decisions is that they enable consensus to a greater degree," Kagan said, in response to questions from Sen. Sheldon Whitehouse (D-RI). "Consensus is in general a very good thing for the country and for the judicial process."

But Whitehouse pressed the nominee for her analysis of the current Supreme Court, led by Chief Justice John Roberts.

"Over and over again it's a court that's willing to make decisions by a 5 to 4 majority ... rather than roll its decisions back ... and reach for a broader consensus," Whitehouse said. He expressed particular disdain for the high court's ruling in Citizens United, which threw out landmark campaign finance restrictions.

But Kagan refused to describe herself as a nominee who would arrest that development.

She replied: "The right approach is to take one case at a time, to not be looking down the road and to figure out in what direction the law generally should go and how that case could lead to another case."

Even though Kagan took pains to describe her judicial philosophy as narrow, she acknowledged that law is not a "robotic enterprise."

Roberts famously described the role of a judge as a baseball umpire, calling balls and strikes, in his own confirmation hearings. But Kagan told Sen. Amy Klobuchar (D-MN) that cases that reach the nation's highest courts are "not easy calls."

She also separated herself anew from her work in the Clinton White House, where she focused on issues like tobacco litigation, abortion and gun rights. There's a "huge difference" between that job and her bid for the Supreme Court, Kagan added.

"As a judge, you are on nobody's team," she said. "I would put on that robe and be independent and not favor any political party."

Alabama Republican Sen. Jeff Sessions, who turned out to be Kagan's most hostile interrogator Tuesday, revisited his displeasure with the nominee and her account of a military recruiting dust-up at Harvard Law School.

Sessions and Kagan disagreed over the degree to which a ban on military recruiters' using the campus career services office affected their access to students and about Kagan's role in rescinding the ban.

"I think that the White House has been spinning that story inaccurately and I believe your testimony was too consistent with an inaccurate spin and didn't, frankly, set forth what you did," Sessions said Wednesday. "I was a bit disappointed with that."

Sen. Orrin Hatch (R-UT) later boiled down the essence of the recruiting dispute. It focused, Hatch said, on whether Harvard Law had provided an equal accommodation to the military -- "not one that the dean would consider good."

Sen. Lindsey Graham (R-SC) said, "It's clear to me that you were trying to make a political statement on behalf of the law school." Kagan denied that, replying, "I had no agenda with respect to this issue."

In any event, it's an issue unlikely to be resolved anytime soon. Both Senate Republicans and the Obama White House sent e-mail blasts advocating competing views on the recruiting controversy throughout the morning Wednesday.

Kagan, who has said she personally thinks the policy is "unwise and unjust," responded that she had acted to "vigorously defend all statutes, including the statute that embodies the don't ask, don't tell policy."

In his questioning, Hatch referred to a memo Kagan wrote during a Clinton-era congressional debate over the procedure opponents call partial-birth abortion. In it, she said it would be a "disaster" if a medical group issued a planned statement saying it found no circumstances in which the procedure would be the "only option" to preserve a woman's health.

On Wednesday, Kagan said the "disaster" would have been if the group's statement didn't reflect what she said was its complete view -- that, in some cases, it was "the medically best or medically most appropriate procedure."

Some Republicans and National Review's website pounced on the memo as evidence of an attempt by Kagan to influence the abortion debate and of an unusual alliance between the Clinton White House and that group, American College of Obstetricians and Gynecologists.

The changed language, Hatch said, had played "an enormous role in both political and legal fights," and he said the Supreme Court had relied on it to strike down a Nebraska law restricting certain kinds of procedures. Hatch called the late abortion procedure "brutal" and said he was bothered by "what appears to be a real politicization of science" in the Clinton years.

"I tell you this bothers me a lot," Hatch said Wednesday.

Kagan told Hatch it was an "enormously hard" subject and one in which she took into account the views of the president she served. A day earlier in the Senate hearing room, Kagan made clear that she believes abortion restrictions must take into account the life and health of the mother.

Senate Republicans also asked Kagan for her views on the commerce clause, in a lightly veiled attempt to get the nominee to discuss the Obama health care law targeted by attorneys general in several states.

Tuesday evening, Sen. Tom Coburn (R-OK) asked Kagan whether the provision would allow a law that would require citizens to eat three vegetables a day. She said the law sounded "dumb," but that whether it was constitutional was another question.

Sessions took up the mantle Wednesday. He called the commerce clause "the last refuge of government scoundrels" and an easy excuse for an activist administration bent on regulating all manner of activities, such as Americans' notoriously poor eating habits. But Kagan said the high court's previous interpretations of the commerce clause were "settled law."

"I have no thought, no purpose, remotely no plan to think about reversing any of [these cases]," Kagan said.