Accessibility links
Mexican Election To Proceed Despite Assassination Mexican officials have declared that they won't let the high-profile assassination of Rodolfo Torre Cantu, 46, derail Sunday's balloting. Torre, of the Institutional Revolutionary Party, was remembered at a huge memorial service in Ciudad Victoria. 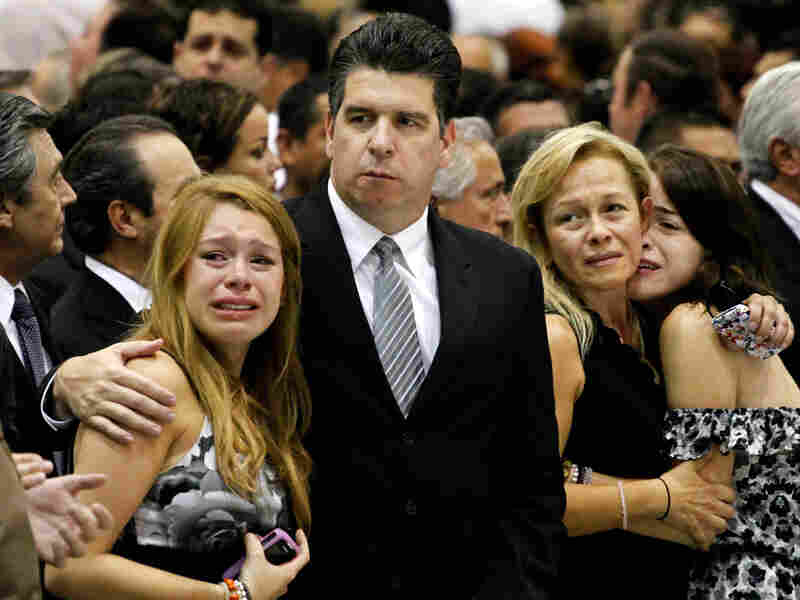 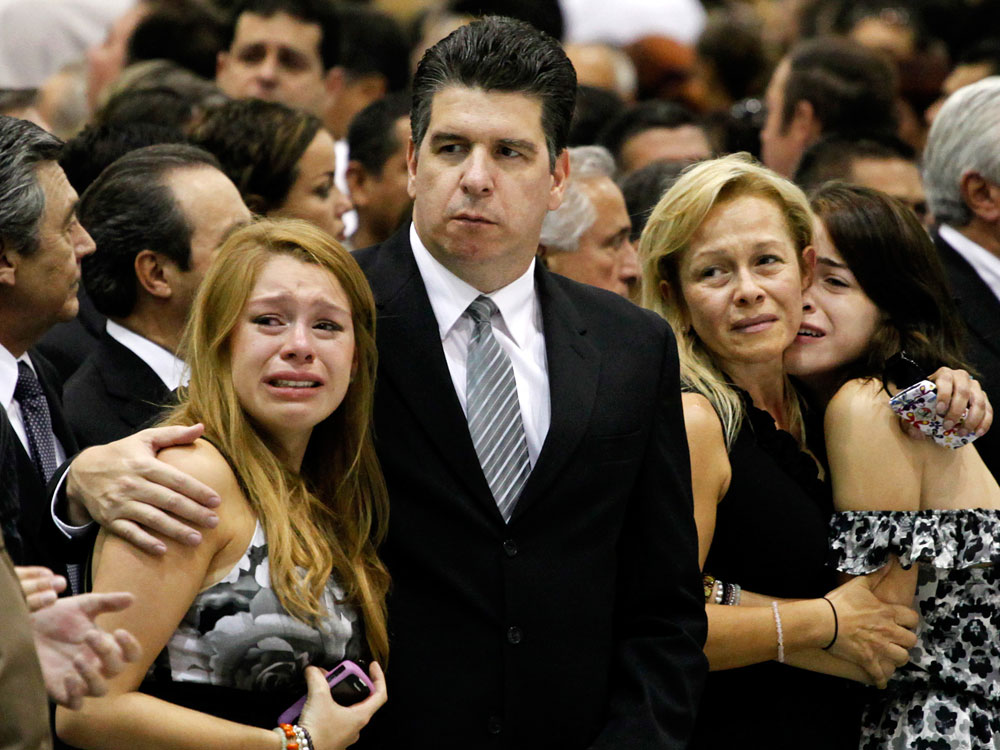 Relatives and friends of Rodolfo Torre, candidate for governor in the northern Mexican state of Tamaulipas, attend his funeral in Ciudad Victoria, Mexico, Tuesday, June 29, 2010.

Leaders of Mexico's former ruling party have convened in Tamaulipas to try to choose a new candidate for governor just five days before this weekend's election, after the previous candidate was gunned down Monday.

Mexican officials have declared that they won't let the high-profile assassination of Rodolfo Torre Cantu, 46, derail Sunday's balloting. Torre, of the Institutional Revolutionary Party, or PRI, was remembered Tuesday at a huge memorial service in the state capital, Ciudad Victoria.

At a modern convention center in the city, thousands of people rose to their feet and applauded for almost five minutes as the bodies of Torre and his bodyguards were carried to the podium. He leaves behind a wife and three children.

Torre was killed as he was wrapping up his campaign. Gunmen blocked his campaign convoy with a tractor-trailer and then opened fire.

Even the day before he was killed, he vowed to tackle "insecurity," the word politicians use to refer to the rampant drug gang killings. He was eulogized by current Tamaulipas Gov. Eugenio Hernandez, who told the crowd Torre was a man who gave his all for the state of Tamaulipas. He said Torre was a symbol of hope during what have been troubled times.

Across Mexico, 12 politicians have been killed this campaign season, but the killings of mayors and local political party chiefs no longer garner much attention. They tend only to get a day or a day-and-a-half's worth of headlines. Torre, however, was on the verge of being a state governor, and he's the highest-ranking candidate to be killed since Luis Donaldo Colosio was gunned down in Tijuana in 1994.

Mourners pay their respects at the funeral of gubernatorial candidate Rodolfo Torre Cantu in Ciudad Victoria, Mexico, on Tuesday. Torre was killed Monday, less than a week before election day in Tamaulipas. Eduardo Verdugo/AP hide caption

Mourners pay their respects at the funeral of gubernatorial candidate Rodolfo Torre Cantu in Ciudad Victoria, Mexico, on Tuesday. Torre was killed Monday, less than a week before election day in Tamaulipas.

Earlier this year, the Gulf Cartel and its armed wing, the Zetas, had a falling out. The two gangs have been battling each other here in an increasingly violent fashion for control of drug-smuggling routes through Northeastern Mexico.

The national newspaper Reforma in an editorial implied that Torre was executed by the Zetas because he favored the Gulf cartel. Torre's supporters say he didn't have ties to any organized criminals.

Beatriz Paredes, the national head of the PRI, said there's a battle going on in Mexico right now between good and evil.

Insecurity Ahead Of Vote

More than 23,000 people have been killed in Mexico since President Felipe Calderon declared war on the cartels in December 2006.

After Torre's killing Monday, there were calls by some politicians for this weekend's elections to be suspended, at least in Tamaulipas. But officials now say all the polls nationwide will go forward as scheduled.

Calderon called a special meeting of his security ministers in response to the assassination.

"These actions represent an attack not just against one citizen," Calderon said. "It's an attack against our democratic institutions. And thus it's an act that requires a strong and unified response on the part of everyone who cares about democracy."

"We cannot and should not allow organized crime to impose its perverse rules," Calderon said, "as they are trying to do now by interfering in the decisions of citizens and the electoral process."

Calderon and other leaders have been calling on the Mexican people to show their solidarity against organized crime by going to the polls Sunday. But in the streets, people said they are terrified.

Many parents rushed to pull their children out of school when word of Torre's shooting hit the airwaves, and some people say they have even less reason to vote now that the leading candidate is dead.