Accessibility links
Foreign Policy: The US And Saudi Arabia's Divergence Saudi Arabia and the United States have grown apart. According to Simon Henderson of Foreign Policy, it appears likely that the kingdom will diverge even further from its decades-old bond with Washington. 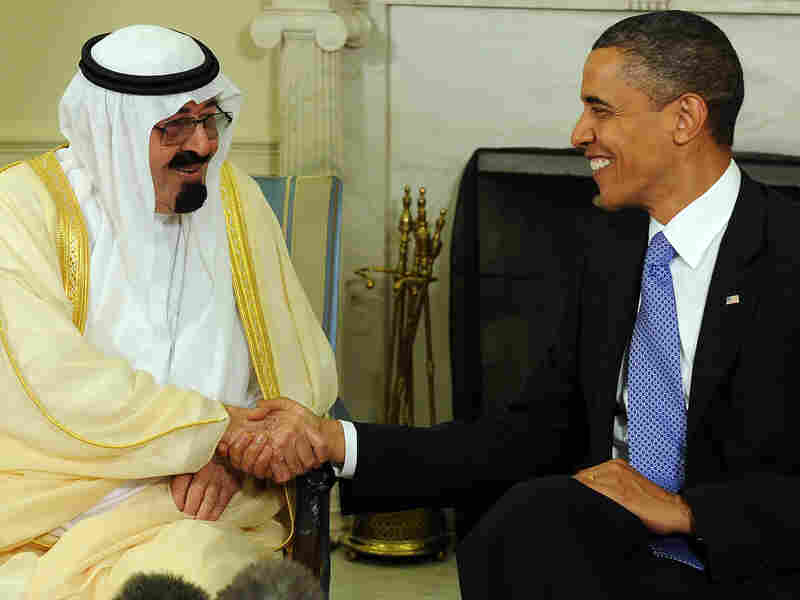 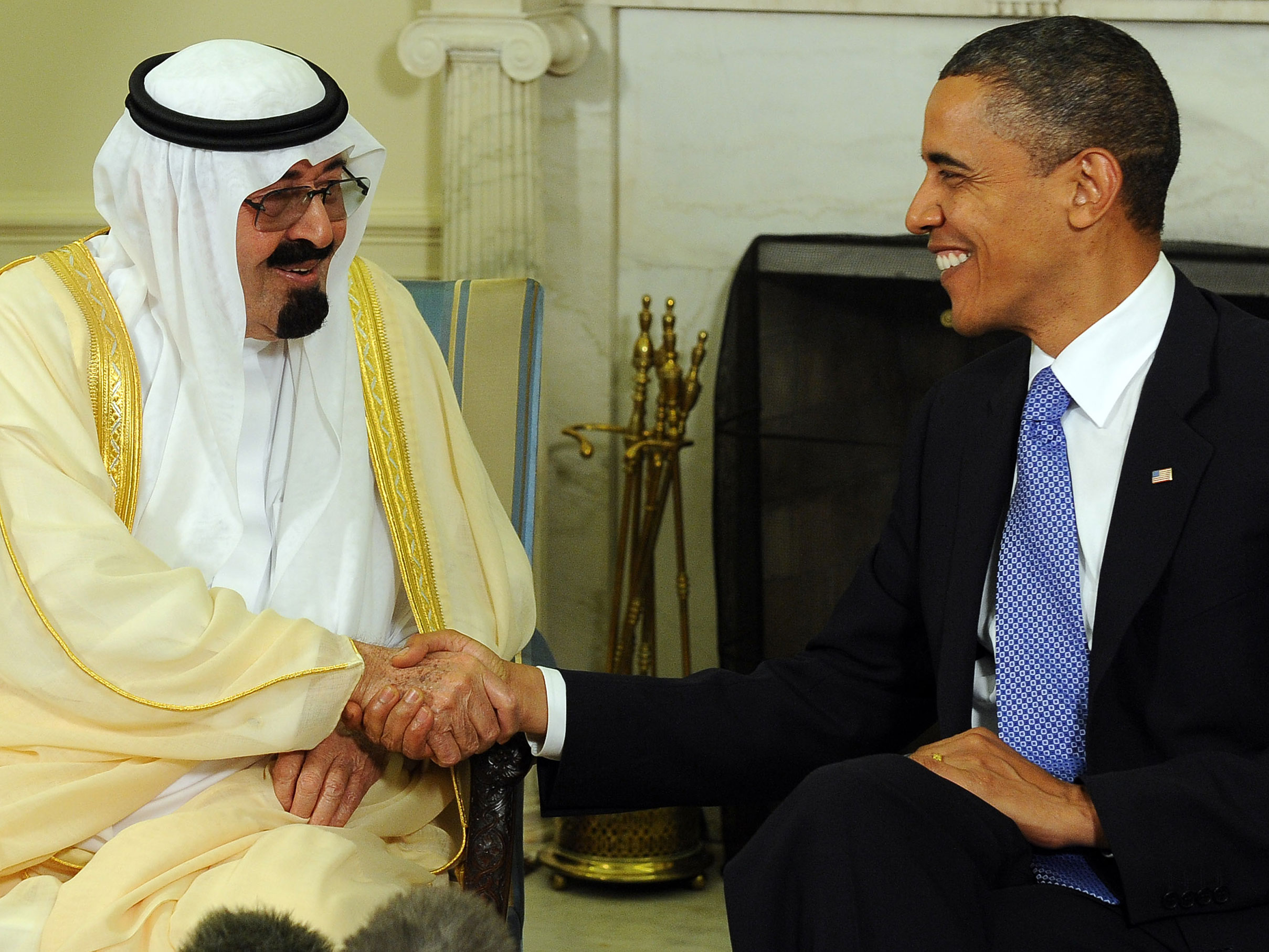 Simon Henderson, the Baker fellow and director of the Gulf and Energy Policy Program at the Washington Institute for Near East Policy, is author of After King Abdullah: Succession in Saudi Arabia.

What will be the image that frames the news reporting of June 29's White House meeting between U.S. President Barack Obama and King Abdullah of Saudi Arabia? Surely not another bow toward the desert monarch, as caught on video at the London G-20 meeting in April 2009. Or what hypercritics saw as a further deferential bob in Riyadh last June, when the president leaned forward so the shorter king could confer on him the King Abdul Aziz Order of Merit, a chunky necklace that Obama took off within seconds.

Of course, what the White House staff most wants to avoid is any image as awkward as the shot of President George W. Bush and then Crown Prince Abdullah walking arm in arm at the start of a meeting at Bush's Crawford, Texas, ranch in April 2002. The shot was memorialized by Michael Moore in Fahrenheit 9/11 and, with Moore himself superimposed in place of Abdullah, became the poster for the movie, plastered on thousands of theater walls across the United States.

We will have to wait for W's biography for his explanation of this gaucheness, which came to define his presidency. However, the prevailing assumption is that Abdullah, then the effective ruler of Saudi Arabia because of the ill health of King Fahd, had thrown Bush off balance by threatening to walk out of the summit before it started. Abdullah insisted on being able to take home a diplomatic prize -- anything to make his visit worthwhile. This demand wrong-footed Bush, who had thought the Saudis would still be -- and should have been -- on the defensive because of widespread accusations about their historical tolerance of the Islamic extremism that spawned the 9/11 attacks nearly eight months earlier. Bush grabbed Abdullah's arm as a way of saying: "Stay. Let's talk about it." The rest is history.

Obama and Abdullah already met just two days before at the G-20 summit in Canada, but Abdullah came to Washington to talk one-on-one about Palestine and Iran. On the former issue, Abdullah thinks that Obama "gets it," as he has been tougher on the Israelis than Bush or Bill Clinton. On Iran, however, the Saudi king fears that his country's historically closest ally is naive, and dangerously so, for putting so much faith in diplomacy. The same emotional approach that causes Abdullah to anguish about the Palestinians also explains his distrust and antipathy toward the Iranians, whom he sees as typically untrustworthy Shiite challengers to Sunni, and therefore Saudi, custodianship of the holy places of Islam.

Despite the official blandishments, there are clear indications that under Abdullah, and especially since 2001, Saudi Arabia has put distance into its relationship with the United States. Abdullah is trying to gain more room to maneuver in the Sunni-Shiite rivalry and between extremists and moderates within Sunni Islam. To do so, he has to erode the notion that the House of Saud is a pawn of Uncle Sam.

A clear example of this distancing is the foundation of U.S.-Saudi ties: oil. Saudi Arabia, despite having the world's largest oil reserves, is no longer the largest global producer -- Russia takes that title. And though for many years, in a clear statement of diplomatic priorities, the kingdom was the largest foreign supplier of oil to the United States, it has now slipped behind Canada and Mexico. With the years of ritual denunciations from both Bush and Obama regarding U.S. "dependence on foreign oil," Washington can hardly complain, but the net result is less U.S. influence in Saudi Arabia.

On Iran, there is a widening if not unbridgeable gap between the two countries. The kingdom's own signals of the policy differences between Riyadh and Washington might well include the June 12 London Times story, which reported that the kingdom would allow Israeli jets to fly over its territory to complete a bombing raid on Iran's nuclear facilities. Although officially denied by Saudi officials, the Times stood by its report. Its editor would not run such a story without being confident of the sources.

The kingdom's own pursuit of (peaceful) nuclear energy is a clear sign that Riyadh thinks that the United States cannot or will not stop Iran's program. A June 17 Reuters story quoted an energy advisor to the kingdom as saying that not only was Saudi Arabia looking at nuclear power plants, but it should also be allowed to enrich the necessary uranium fuel itself. That mirrors the Iranian stance, though the ability to make low-enriched uranium for power plants is, but for a few technical tweaks, the same technology needed to make highly enriched uranium for an atomic weapon.

Saudi Arabia's ability to master this technology is doubtful -- but its ambition is not. By his own admission, Pakistan's controversial nuclear expert, Abdul Qadeer Khan, now notionally free after years of house arrest on allegations of rogue nuclear trading, visited the kingdom around 50 times and was on the technology subcommittee of the Jeddah-based Islamic Development Bank. According to Khan's 11-page confession letter, a senior prince at one point even offered Saudi citizenship to Khan and some of his aides. (They declined.)

Abdullah's determination to go nuclear, at least for generating electricity, is being encouraged by France, where he will travel after leaving the United States. French President Nicolas Sarkozy, who is noted for his tough approach on the Iran nuclear issue, has already pitched the idea during three visits to Saudi Arabia. If the kingdom pursues this, it will impact the centerpiece of U.S. nonproliferation efforts on the Arabia Peninsula: the so-called nuclear 123 Agreement with the United Arab Emirates (UAE), which won U.S. approval for nuclear power plants by renouncing enrichment technology. If Washington accepts Saudi enrichment, the UAE -- which in its bad old days, also offered Khan a passport -- would insist on renegotiating its deal.

The octogenarian King Abdullah often cuts a lonely figure in the clannish House of Saud. One almost sympathizes for him when he returns home and has to explain to his brother princes where the United States stands on key policy issues. Crown Prince Sultan, his designated successor and official stand-in during his absence, is reportedly enfeebled and unable to comprehend government affairs. Therefore, the ultra-cautious, conservative, and anti-Iranian views of Sultan's brother, Interior Minister Prince Nayef, who is emerging more clearly as the next in line, could be crucial. Both men were said to be involved in paying off Osama bin Laden in the years before 9/11. So, even if the enduring image from this most recent summit is a bow or an embrace, it appears likely that the kingdom will diverge even further from its decades-old bond with Washington.